...and vice versa. For over a year I've had to start my runabout on battery. It just never would start on MAG, whether it was cold or warm. I figured that the last time I had engine out to fix the transmission I had somehow weakened the magneto, though I couldn't imagine how. Once the car was running I could switch it over and it ran OK, but it was always no start on MAG. It also took a lot of cranking to start when cold, even though it fired on the first pull when warm.

Installing a newly overhauled Ford NH last weekend cured the hard starting on a cold engine. It also "fixed the magneto". With the new carburetor I'm enjoying easy starts on both BAT and MAG. Now the challenge is figuring out what's wrong with the carb I was using.

OR, you wiggled something else while you were in there changing the carb...

Doesn't exactly add up here either. Sounds like it was hard to start on batt or mag when cold. The easier start when warm doesn't tell much either as it should be easier to start when warm. (slightly better compression perhaps ?) My first cold start on mag was after I had the coils HCCT'd. Nothing to do with fuel. Believe this is the one you recently replaced the plugs on too?

Steve, I have a Cajun mechanic friend that agrees with you. He is a GM master mechanic and has won several of their troubleshooting contests. He says 95% of electrical problems are "carburerational." When JB speaks, we listen!

Adam, I don't think so. I don't believe I even touched anything electrical while I was dealing the the carbs.

Correction, Charlie. It was hard to start cold on BAT. On MAG it was impossible to start, cold or warm. Run, yes. Start, no.

Yes, I did change the plugs. I took off the 3095's and installed the pink Firestones. When I found that two of those were dead, I took them off and reinstalled the 3095's. So the plugs that were on the car through those months of hard starting are the same ones on it now that it's an easy starter. I believe the Patterson coils are out of the picture. All I did with them was move them around when I was determining that two of the Firestone plugs were a problem. Moving them about had no effect on starting. That didn't change until I installed a different carburetor.

1. What percentage of the post 1950 population understand the operation of an internal combustion motor? Starting the Model T Ford and related engines.


2. What percentage of the same population understand the process of trouble shooting a non start internal combustion motor?

George; I assume that by post 1950 you are including the entire 1950 decade as Internal Combustion (IC) literate and External Combustion (EC) semi-literate.I went to a trade school instead of a HIGH School in the 60's and there were a lot of us moterheads then.

Learning mode turned on and thinking out loud.
Battery supplies constant power, Magnetos will pulse, but does the condenser in the coils store the pulse long enough or do they just act as buffers.
If crankshaft is bent like a car I had, it could never be timed right. The magneto pulse would hardly be used, power capture missed. The magneto wave must be a lot more flat than I believe from Faraday.
Carburetor was replaced, fixes problem, maybe was too rich at idle. My idle mixture screw on the Ch3vy when closed all the way still allows the engine to run. Steve's Ford carb may have a idle mix screw seat problem as the needle itself is OK.
Just cause the needle looks pretty does not mean the seat is any good, or match the same angle, or are centered together. Wondering if the needle even needs a point, could it be squared off in case the seat is rounded at the end...hmmm.

Learning mode turned on and thinking out loud.
Maybe the seat has a hole at the end and rounding is a non-issue. Wonders if there is a grinding compound like for valves that can be used on brass parts to make them match and not embed in the brass.

George that is worthy of a new thread.

But G.R.Cheshire (La Florida!) there are a number of new motorheads that did not go to trade school. They like the look of the vintage cars...but are not to experienced in their mysteries. And if they are not fast enough for today's motorways...pull the original motor and electrics/fuel/transmission and replace it with a computer controlled 425 HP motor...and 12 speed computer controlled transmission. So much easier to repair when you have a code to rely on for information....

Re difficult starting using a battery, it was naďve to believe the first clause in paragraph 3 of the battery charger instructions. 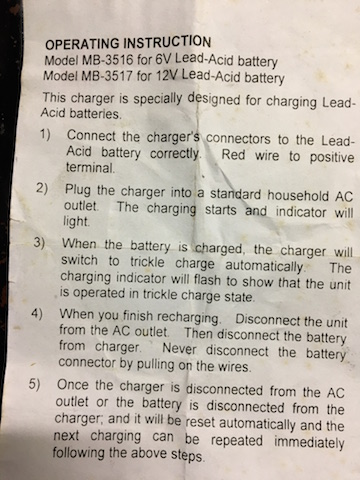 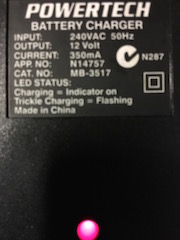 I mistakenly believed the flashing light reflected the true state of battery charge.
Finally, it got so low that the coils didn't buzz at all - a volt meter on the battery told the story.
Amazing what a difference a charged battery makes!

All of what you're saying has the patina of logic Steve...but Model T's are like women.

The moment you think you've started to understand what the problem was, and take steps to fix it...you find out that you're not only wrong, but also doing something that's causing more harm.

Maybe so, but for now I'm just enjoying how easy it is to start and how nice it is to drive.

The desire to insert another quip here is strong.

On a separate note...I was walking around the showbarn at Chickasha and was headed over to speak to you but you and another guy were headed out the door in your runabout.

Catch you next time.