A while back I purchased a motor that had a serial number of a 1914 stamped on the block, but the casting date on the block was of 1917. The serial number stamping area is old and aged like the block has. I was told that if you ordered a new block from the Ford dealership, the new block came from the factory with no serial number. You then had to stamp the original serial number of your old block on it. So my question is, Is that true and can that be confirmed? Also, has anybody else see this type of case that I have? Is the block I have worth something as an oddity?

That's right. Replacement engines came with serial numbers. Replacement blocks didn't. As you say, they were supposed to be stamped with the number of the block they replaced. This is covered in Bruce McCalley's Model T Encyclopedia.

I have a 26/27 style block with no serial number. It has hardly been used and is in a chassis with multiple years of parts. The chassis was titled in 1924 with a 1924 engine number.

Does anyone know about some of the casting marks and letters on these things? I have N series tractors and you can identify time by some of the letters and numbers they put in the casting molds.

I've got one with a 1921 cast date and no number stamped on the block. I took it apart and it had an earlier transmission with no ring gear.

I think my transmission is a 1924 and it fits just fine. The block has the holes for the 26/27 hogs head though.

Ahh, the great mysteries of model Ts. This is a difficult one. "Technically", the block is a 1917 part, and "technically" it does not qualify for the HCCA National use, however, if you used it, likely nobody would object (I wouldn't under those circumstances, it is in fact a legitimate part of the car's history). Model T blocks were continuously changed in minor ways. Most specific combinations of details were used for two years or less, some for only a few months. Blocks can usually be identified to little more than a year's timeline by all those details. The big exception is from 1922 through 1925 (one piece valve cover). While there were some very minor changes (mostly in the quality of the finish), many were used for about three years time.
Late '13, '14, and most '15 blocks are basically the same, with the enlarged water jacket, and sloped back end of the water jacket. In late '15, the serial number pad (embossment) was enlarged to allow for the larger million plus numbers. The shape of that pad changed again in later '16 and apparently again before the first 1919 starter blocks were being produced. The 1917 block I have is considerably different than the early '16 block I have.
Most of these changes were made in the mold pattern stage of production. These patterns then (with repairs and occasional minor modifications) made the molds from which the blocks were cast. Inner water jacket molds were one-time use sand. Block external molds were used over and again until they became damaged. It is not uncommon for earlier pattern designs to continue to show up for a few months after the new pattern design would first be installed into cars.

It is wise to recognize that the block is later than the serial number. It does affect its value (largely because of the HCCA rules, which by the way, I support). Throughout most of the hobby, it is totally acceptable to use the replacement block. And even within the HCCA, only a few people would object.
Personally, I find these rules both quite necessary, and somewhat silly. Necessary, because some sort of guidelines are needed to help people restore and maintain cars to some standard? And silly, because some people will make a big hairy deal out of a 1917 cast replacement block (which is almost the same as a '14 for crying out loud!), and think nothing wrong of touring in a model T with a Ruckstell (not available until 1920), an overhead valve Rajo or Frontenac (not available until 1920), and specific after-market wire wheels (which were not specifically available until 1920), and a dozen other era incorrect things on it.
But, that is me. And I like my cars to at least appear era correct.

(My opinion? Use the replacement block.)

A friend known to Euro members has a very correct 1911 car with a replacement block, where the cast date is 1915, and where the stamped original serial number is preceded by the letter "R". Maybe someone here knows where in the replacement process the motor was stamped? Had this been a factory mandated function, I would think the procedure would have been widely known, especially among the early T's, where severe motor issues were more common.
Regards,
Scott

Service Bulletin to dealers on how to number a blank replacement block, advice to 'keep' the original engine number for reasons of ownership. 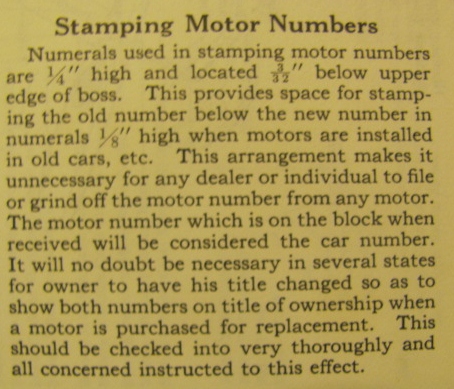 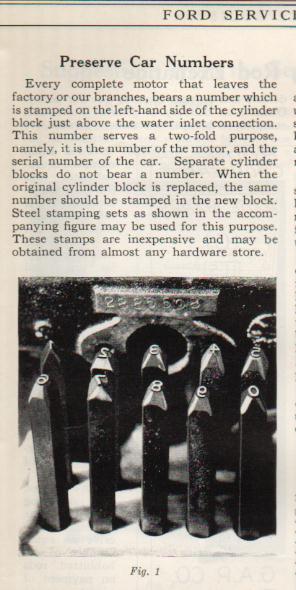 Note that complete motors came with serial number, plain blocks only did not.

Back in the teens and twenties in the northern states keeping the engine from freezing and cracking in wintertime was a real struggle. Antifreeze wasn't available, so you had to remember to tap off the water before the engine cooled off too much - and perhaps heat it up on the stove before pouring it in again next morning..
Denatured alcohol could be mixed in to prevent freezing, but it evaporated and needed to be filled up regularly.

Maybe it's an engine from up north that suffered from a seemingly minor negligence that resulted in a major damage, a cracked block?

My engine has an October '26 serial number. I have not been able to find a casting date anywhere. I assume that it's inside somewhere. Where can I look to find it?

Before I purchased my '13 roadster, apparently that is what happened, and even later, the replacement block took a dump too. What I wound up with is a decent April '13 block that was cast sometime in 1912, with a number pretty close to what the original was. It must have had issues, as it has been sleeved. It's a good block so far, and haven't had any issues. It is coupled to a wonderful transmission, which I assume may be original to the car. It still has all the early stuff in it.

I have a 26-27 "Improved style" engine block with an October 1924 number, a 23-25 (one piece valve cover) block with a 1913 number, I also have a 1926-27 Improved block with no number that may be NOS, and if I remember correctly I sold Mike Bender a 26-27 block with no number. I can not remember them all but thru the years I have had other blocks with obvious earlier numbers on a later style block. They are actually a "somewhat common" find. Not an everyday find but not rare either. I once bought 14 engines that probably had been the "bad" engine that was replaced by the "new replacement" engine. All the engines appeared to have been beaten with a sledge hammer, and all the engine serial numbers had very roughly been removed with a cold chisel. I think the dealers were supposed to destroy and deface the engines so they would not end up as used parts.

When you open up the engine with the 1914 serial number on it, it would be interesting to check the transmission stub shaft. You may have the original transmission that "goes" with the re-stamped number, or car.

The stub shafts were dated on the early engines and precede the "date" of the engine serial number found in the Encyclopedia by a week or so.

Mark Nunn: Ford stopped using engine block casting dates and, Ford Made In USA, sometime in 1923 so your 1926 engine doesn't have a casting date on the block.