Seems like every time I mention driving my 26 coupe at 40-45mph at times, there's always at least one person who chimes in that Model T's should no be driven above 30-35mph. What's the deal? Ford rated the T for 45mph top speed. For what it's worth, I don't go driving the coupe around full bore. Only time I hit 40-45mph now that the mag is fixed and with the Prus head, is when I'm ona flat approaching a long hill. I like to open her up to 40mph+ to hit the hill with top speed in 2nd, and just before I start up the hill I'll back off the spark 4-5 notches to prevent lugging or knock. Seems to pull better in 2nd on the hill slightly retarded as well. Using this approach I can pull most of the big long hills out here in the Catskills, in 2nd/high. Engine won't lug, car won't knock, and saves the ow band. Why do people insist on driving a T, at speeds it was designed to run at? I've never understood it.

Sorry, should read "why do people insist on ridiculing driving a T, at speeds it was designed for?"

Front end is also fairly tight on my coupe, has little to no meander, and now with the wire wheels, zero shaking to it, at 40mph. It's solid and straight.

Matthew, I drive my ’26 roadster occasionally at speeds of 40 to 45+ mph where it is prudent, I went through everything on the front end replacing all bushings, spindle bolts, steering gears, shaft etc. In addition, I have Rocky Mountain brakes. If I had not done the above, I would not be driving it at those speeds. I too recently installed a Prus head to help with hill climbing. Now I can maintain 35 mph in high going up hills I used to have to drop down into Ruckstell with.

exactly. I usually only drive at about 35mph or so, I only open up when coming on a hill. Unfortunately out where I live there are a lot of said hills haha. The Prus head really helps with a 26 coupe. My weight of the coupe with spare wheel, full coolant and gas, is around 2,000 pounds. The extra power from a Prus head has been great.

So ignore them. You know what is ok for your car. On an open road, no traffic I might open mine up for a little while knowing the condition of MY front end, but she runs best in the 30-35 range.

As long as your car is in sound mechanical condition short foray's into the 45 M.P.H. zone are nice. I would keep the full bore runs to a minimum for the same reasons I would not drive my E-250 at 95 M.P.H continually, if you are at the edge of the envelope and something goes South you don't have as much time to react. 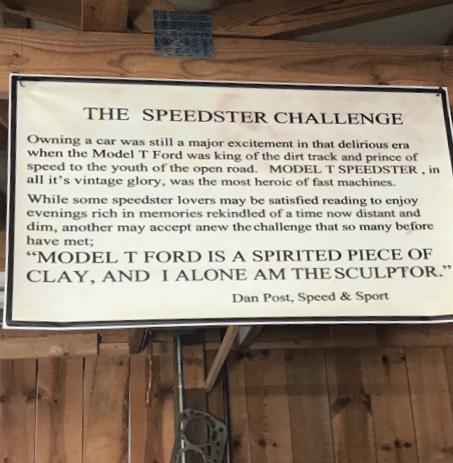 I would not worry about a specific speed, drive how it handles.

I drive my Hack at 35 only because that's all the umphh the elephant has behind her. To push her harder sounds like a coffee grinder. and doesn't seem to get me any more

I drive my 15 Roadster as she handles...which CAN be a problem. I find country roads and just settle in and drive by ear. The 15 sounds like a Singer sewing machine that hasn't even begun to breath hard. I will admit that speed sneaks up on me at times, and it dawns on me how 'light' the front end seems to be at those speeds so I slow. Folks following me in those situations tell me I get to 45-48 in those moments. The 15 is stock which makes it doubly dangerous I guess.

I have driven that white speedster (the one with the bikini girl as the starter) on a country road well into the 50's! It was exhilarating until I was reminded it was winter and only 40 degrees out. I never determined whether my death grip on the wheel was from fear or being frozen.

Once got a ride in a 26' with the late Perry Walton. It had a "Hot Rod" T motor that looked stock except for Model A manifolds, it an overdrive (or two). Got passed on the freeway by two young girls in a van that waved as they went past. Perry looks at me, says "Chicks!" turns his baseball cap around backwards for better aerodynamics and "opened her up". Gave the Model T "dying cow" horn a couple of blasts as we went motoring by... Not sure of our exact speed, but we were passing people on Interstate 8! The car was not straining and felt more stable then my Samurai. Perry may be gone, but his memory and stories are still with me, Thank You Perry!

Going fast is the easy part! How about stopping and handling? I wonder how well the stock T suspension and steering would handle a blow out at 45 plus mph! I rarely exceed 35 mph and that thought is always on my mind especially with the foreign crap tires we have to drive on!

One of the first times that I drove a Model T (a '24 touring), I was being followed by a friend with a car that was speedometer-equipped. He said that I was going 44. The T felt fine.

The Model T will go, especially downhill, faster than it is safe to go in a Model T. The suspension and braking were not made for high speed. I don't know what Perry had under his hood, but I remember him!
There are a few places where I open my car and go as fast as it will go. One is on Interstate 15 across Lake Hodges. It is quite level. There are no local roads across that area. I get on at the first ramp before the lake and off at the first after the lake. I stay to the right and go as fast as I can.
I usually drive on the back roads at about 30-35 MPH.

There's 2 places I don't want to be involving a T going 45 MPH. One is anywhere in front of where it's headed and the second is in any vacant seat in the car. I say vacant seat because if I was driving I wouldn't be going that fast.

I sure wouldn't want to trust wooden spokes at 50 mph. -At that speed, you can't safely swerve to avoid the pothole you saw too late, and if you hit the hole, you could collapse a wheel. - And of course, braking action with or without Rocky Mountain binders would rival the Titanic for distance covered during the maneuver. -Sustaining the high rpm and power necessary to overcome the kind of parasite drag (which increases as the square of the speed) you'd encounter at 50 mph would be extremely hard on the engine, to say the least.

As a "for instance," my '15 Touring has a nice, tight front end that tracks straight ahead and has absolutely no play in the steering (thanks to a forum pal who re-bushed the spindles for me). -The engine has new valves, aluminum pistons, a high-compression head, an extra-large intake manifold and an NH carburetor, so there's sufficient power (in fact, more power than I'd actually dare to put through a stock Model T crankshaft). -She's also got fresh tires & balanced wheels. -Now, on one not-entirely prudent occasion, I had that fairly powerful, fairly solid, fairly stable car up to 42 mph and at that speed, there was plenty of reserve throttle left, so she could have gone faster—but the car was talking to me and she sure as heck was NOT urging, "Go for it!"

With that in mind, in my humble, know-nothing newbie opinion, the highest reasonably safe cruising speed for a Model T Touring would be around 35 mph—maybe even 40 if the road ahead were straight and smooth and there were no pedestrians, traffic or intersections in sight—and you figure you’ve already lived long enough, anyway.

I wish that a mostly original Model T Touring could safely cruise on the highway and thus avoid the expense, space consumption and inconvenience of a trailer; but nah, it can’t really be done unless we're talking an exceptionally strong, tight Model T with a light load and a very short distance.

I generally keep it in the 35mph range. When I see a hill coming up ahead I'll open up and let her get up to 40-45 though. Once I crest the hill I close up on the throttle to engine break on the way down. at 40/45 the coupe has proven to be stable.

It's not the "go" that concerns me as much as the "stop"....as others have said.
Bob mentioned wooden spokes - a consideration.

Putting some numbers into this interactive chart
https://www.random-science-tools.com/physics/stopping-distance
enlightens me to the point of nervousness. I do believe the methodology includes four wheel brakes on "modern" wide tires with a larger footprint than the T offers.

Either the above chart, or another similar one reads the total stopping distance DOUBLES when you increase speed from 30 mph to 45 mph...with 4 wheel brakes.
Your car, your life...drive as fast as you wish. Me - I'm concerned about the ignoramus that pulls out in front of me...I need more room to stop than he/she figured...if there was any thought about that at all.

Enjoy life...it is sometimes too short!

I,ve done 60 MPH in a T that had all the speed stuff and I thought we were going to lift off,I have had the 1912 up 50 MPH but that was just to see what it would do. The 12 runs nice at 25-35 MPH it all comes down to how fast are you willing to go on 100 year hickey. I must admit I do wonder when someone buys a T and the first question is how do I make it go faster,If you want fast the last car I would look at is a model t . Cheers Colin

I have a completely stock 26 Touring, and the restoration was finished in 2005. It will and has gone all day long at 70-75 MPH. Piece of cake...as long as it's in the trailer behind my Denali.

Steve, one "condition" you for got to mention: condition of the driver!!!

Life moves fast enough. Driving the Model T gives me the chance to slow down and enjoy the scenery. I could drive at 45 mph as much as wanted to, but I'm out to enjoy the drive. I want it to last as long as possible and this gives me the opportunity to just poke along. Most other drivers don't seem to mind by the looks of the smiles and waves I get.

I know a guy who got pulled over in his Model T doing about 60 in a 40 mph zone. He got a warning, nobody could believe it.