Anyone ever have a salvage/reconstructed title on a model T? I ran across one that does and was just wondering about value impact as long as it checks out and is mechanically sound.

My opinion is that it would not really matter. Many Model Ts are put together cars from various parts piles.
I have never seen one with a salvage title though.

Honestly - that is the right title for most Model T’s - as they are usually made up of more than one Model T by the time they reach you.

The only concern would be if the salvage status prevented you from registering it for use on public roads.

Kinda depends on the licensing rules of your state. I purchased my '26 Touring here in WI from another WI resident. The car came with a regular title as a Collector vehicle, but had a rider on it stating that the car was a "reconstruct" (in essence for WI DMV a salvage vehicle). I wanted to title it as a Collector vehicle. The DMV here in WI insisted since it was a reconstruct, it was supposed to be titled as a "Hobbyist", which in their estimation made it a 'hot rod'. Even though it originally was titled with a Collector title, the nice folks at DMV wanted to change that back to a Hobbyist (which has different rules for operation than a Collector vehicle). After much anguish and gnashing of teeth, several phones calls, faxes, and emails, I finally got a hold of an employee who was willing to show her supervisor a picture of the car (below). His comment: "Oh yeah, that's a Model T". After that ordeal the resolved itself and the car was issued a Collector license plate. Even though the title has clearly stated "Collector" 1926 Model T on it, it still has the "reconstruct" rider on it. I suspect sometime down the road when it leaves my possession, someone else will be fighting the same battle. 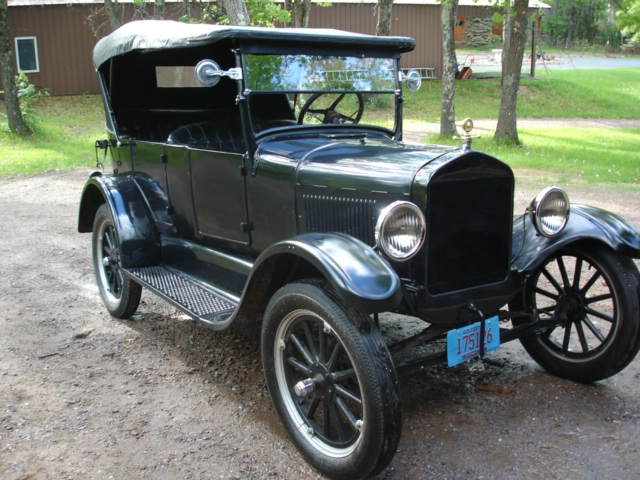 Does the current owner know why the car was given a salvage title? Here in Ontario salvage titles are given to a vehicle that first of all is a total loss. (Total loss means cost of repairs plus the salvage value is more than the actual cash value of the vehicle ). Salvage title is then given when specific assemblies are required to repair the car e.g.the frame on a model t. Different titles were introduced because unibody cars were not being repaired properly and sold to unsuspecting buyers

With a salvage title, you might be unable to get collision insurance -- i.e., liability only.

I was told by a Missouri Highway Patrol officer, who was a car guy and very helpful, that it was possible to obtain a salvage title after going through a few steps. I was trying to help my aunt get a title for her Model T. Having a salvage title in MO gave her legal ownership but would not allow her to register the car. It only gave her a legal right to sell it. That doesn't make sense to me.

I'm looking into insurance... Michigan does require an out of state vehicle with a salvage title be inspected by the cops before you can get a Michigan salvage title. They will let you drive it to the inspection location unregistered exempt from tickets though... lawless for a brief period!

A salvage title on a Model T or for any antique car can't be the best way to go in trying to get a title for an an old car. To many questions will be asked and to much hassle in trying to sell it or at least register it.
A lot of old car restorations are restored using parts and pieces from other cars and determining when a car is a salvage project or a restoration project can turn into a nightmare.
'My advice is NOT to go the salvage title route.
Whoever came up with a salvage title for an antique car definitely went the wrong way.

As stated this varies greatly from state to state. But generally speaking, when the insurance company decides a car isn’t worth fixing, AKA totaled, in many states that renders the vehicle a salvage unit. It does not however mean the vehicle cant be repaired to a good serviceable and safe condition. They typically go to an insurance auction and in some cases are bought by shops willing to to the job for less than the first line body shops will do it for, the rest go to salvage yards and are sold for parts, then crushed.

The problem arises when the fine folks at the DMV try to interpret the rules that apply in that state. A bitsa T would not really meet the intent of the laws/rules for issuing a salvage title, but it’s bound to happen.

The rules for a salvage designation are all about disclosure and are intended to protect the purchaser of vehicles which are returned to the road. Think of all the vehicles flooded in Houston last August. There are unscrupulous people who can do amazing things to clean up vehicles like that and then sell them to the unsuspecting.

Kevin... do you know why your touring has a salvaged title?

The car was originally from MN. It was assigned a "reconstruct" (salvage) there. I have no idea why. The gent I bought it off was able to license it as a collector car but the rider as being a "reconstruct" stayed. I just tried to transfer the title to me as-is after purchase and that's when all the fun and games began. DMV insisted that as it was originally a "reconstruct" it must be a "hot rod" and not an original car. In WI a "reconstucted" car has to display "hobbyist" plates. If you display "hobbyist" plates, your car can not resemble the original vehicle...hence it is expected it will be a hot rod of sorts. If the car says 1926 Model T, it had better be a t-bucket or similar. Since my car obviously isn't a t-bucket I could be arrested for displaying "hobbyist" plates. Don't ask me who makes these rules or exactly how they apply them. I'm clueless. All I know is it was a royal headache to get WI DMV to admit my car at least looked like an original (even if it was a bitsa car like most of ours) so I could license it as a collector vehicle and be legal driving it. The best part was I got to talk to lots of nice folks along the way who had absolutely no idea what a Model T looked like.

Kevin I have a good idea why the the T was assigned a " reconstruct (salvage) title. Evedintley the previous owner must have volunteered to much information about how the car was restored and etc.
What he should have said was he had gotten the old car running and when he bought it it didn't have a title. He should have gotten a bill of sale at the beginning to start a paper trail.
Anyway what's done is done. As stated many times before on this forum to much information given out at the DMV can lead to a LOT of headaches.
Good luck with your T and have fun driving it.

At my age,as long as I can legally drive it on the hwy and not have to watch my back all the time,I don't care if the dmv calls my T a 1980 Chevy Citation.
Resale,being i don't have any kids and it will be my cousins kids getting the end result of my assets,hopefully a long time from now,I don't care what it is worth at that time.May figure out somewhere for it to go before I kick the bucket who knows.
Thanks to a wreck my old station wagon has a salvage title.Before it got to 35 years old my property tax value was like 400 bucks. When it became the magic 35 years old,I got a property tax bill based on a 8800 dollar value.Trust me,the county assessor got a good look at it the following week and it came down to 1200.
But 6 years later,right back to 8800 bucks AGAIN. Yep,had to drive it back up there,parked in the same dang spot,he used the same camera,and got it back down to 1250 this time.Although some of the quarter panel fell off somewhere in Charlotte a couple years before,it is still worth that much. So value is in the eye of the county,state.And they look thru a milk bottle bottom I believe.

I went to NJ DMV one time with proper photo’s. Low hood, rad shell, fenders in primer. Receipts for parts bought to put together. Gal said “you get reconstructed title as modern parts used. Lost that argument said, never mind!

Went home changed out rad cover and hood for a high I had in black, two d ratty black fenders, took new pix...went to different office...no problem, in and out 15 min

I bought a TT on a bill of sale. I spent $1500 on Lawyers and gas, went to 4 different DMV an still no title. Then a idea struck me. I took the lady to the DMV with her dead husbands death certificate, and she applied for lost title. Less than a week she had a title, she signed it to me and less than a week I had a title I paid for the title fees and $10 worth of gas and had a title.

One thing I have learned over the years is that when dealing with the authorities on legal matters - be very careful. It is easy to make mistakes that will be hell to correct.

Some states will NOT license a vehicle with salvage title.

Not much luck getting information from the insurance companies about a vintage car with a salvage title so its on to the next car... Thanks for all the help!

Here in Missouri we can get a bond (not a salvage) title. After three years with no claims against the car the state issues you a standard clean title. Might be worth checking with your state DMV and see if they offer them.

Reminds Me of the Johnny Cash song. " I Got it one piece at a time"

I sent you a private message and included a link to the correct page in the Michigan SOS website. Please look in your e-mail.

Thanks guys! I talked with the my state agency and although it is possible I don't feel like going a round or three with bureaucracy so i'll keep looking...