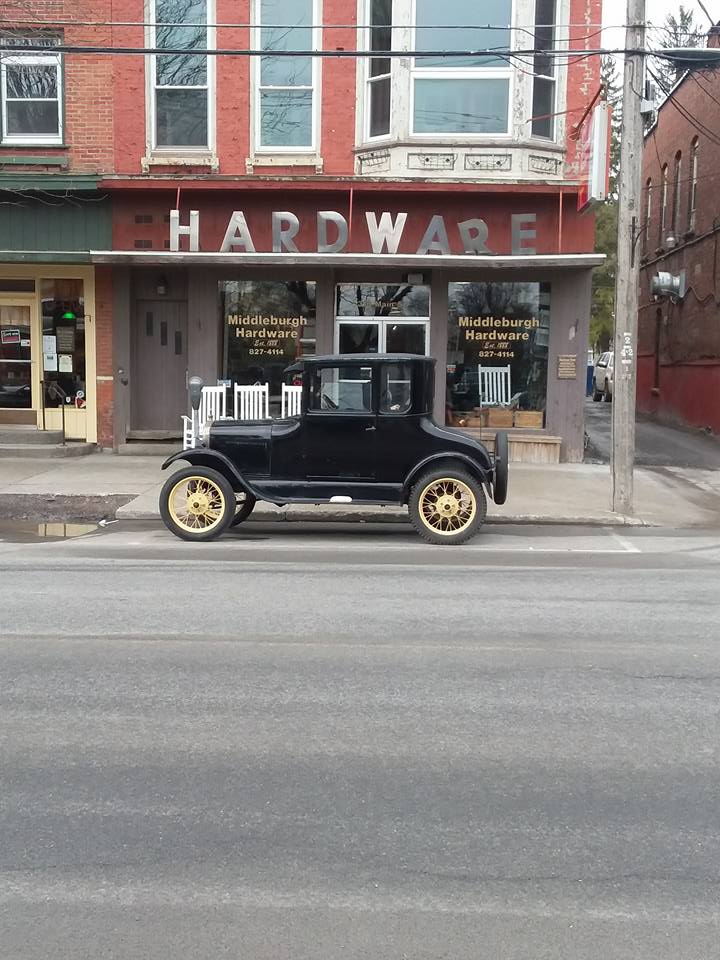 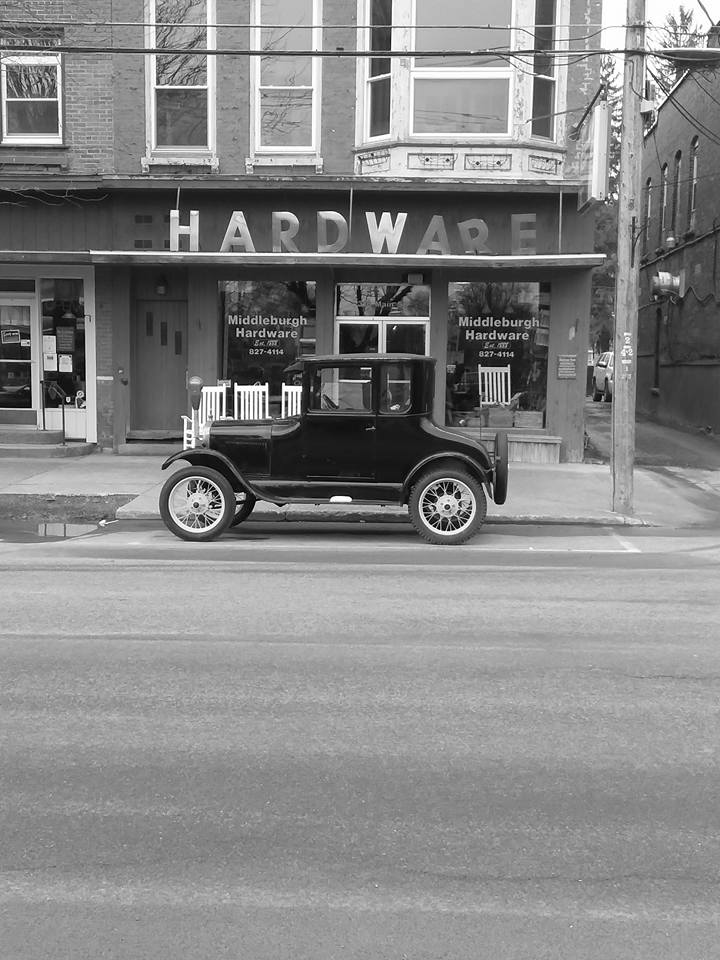 That has a great look to it. You have captured some of that old time charm.
Rich

Those are aggressive looking skids on the rear. Great photo.

The next town south from me used to have a great old time hardware store, but the owners retired and sold it to someone who threw out all of the old inventory and opened a cookie cutter Ace franchise. No reason to go there any more. 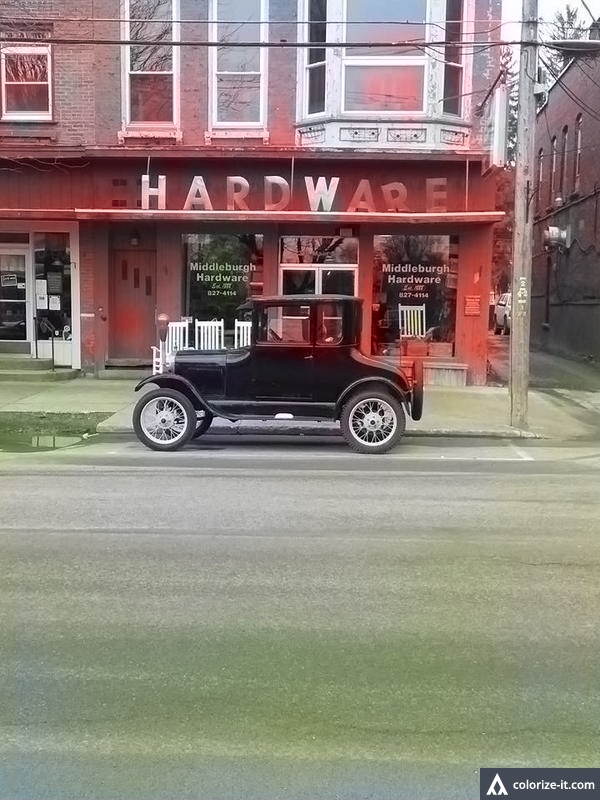 Matt: Will you be @ Rhinebeck on Sunday with your T? Hope so, jb

I really MISS the old hardware stores with their oiled wooden floors, bins full of nuts/bolts, plumbing items and the general smell of age. Not a musty smell.....no, the smell of wood, old leather, iron and determination to get a job done.

The last such store I found in the San Francisco bay area was in Redwood City.....been there since the late 1890's or so. I found a nice selection of cast iron pot belly shop stoves and bought one.

The stove is long since gone and I understand the store itself closed not long after I visited it. But they never.....NEVER.......sold toasters and coffee pots, just hardware and horse shoes.

Thanks for the responses guys. I've always liked this shop. They have a little of everthing. I'm actually using a small metal tool box I got from them that I keep In the trunk of the coupe. My grandfather and I will be at rhinebeck, but the coupe will be home unfortunately. Every time I go to the hardware store I pick up a coke from them. They have a 1940s coke metal cooler that they sell glass bottle coke out of. No corn syrup, cane sugar. Good coke.

George hit the nail on the head. "...oiled wooden floors, bins full of nuts/bolts, plumbing items and the general smell of age."
Aren't we lucky to have been to those places and have the fond memories of them?
Rich

I've known two stores like that. Both gone now unfortunately. If you needed a replacement leather for an old pitcher pump, they had them in stock. The one up in northern Michigan, was liked by the locals because they pretty much had 1970's prices on their old stock!

This place also has old liked wood floors. Funny thing is over the past century the place keeps getting expansions. They add on on the back. Building has to be 300 feet long now haha.

That reminds me of Evers Hardware that, until recently was still operating in downtown Denton, TX.

It was established in the 1880's and still had the ladders on rails that were pushed down the sides of the stores to get to the stuff up high. The Evers family was still running it when I was there in college in the early 1990's.

They had some stock from 100 years before, like wash tubs, etc, that they never sold, and had those items on display, way up high in the store. It had wood flors, bins for the nails, etc.

It was just absolutely glorious. I'd just gotten out of the military after having done the Gulf War and, at the time, I was really into spending a lot of peaceful time alone. One of my favorite things to do on a weekend was to go downtown, eat at a hamburger place, then go walk through Evers Hardware for literally hours. It got to where the staff knew me by name and just left me alone. I didn't bother anyone, didn't say a word...just quietly looked at the store, and all the antique goodness of the place.

Sadly, the family sold it a while back and now it's just another stupid antique store.

Dunsmuir (CA) Hardware is still mostly like that, even has marks on the floor to measure rope lengths, etc. Also nearby in Chico (CA)is Collier's Hardware, while they have modern stuff, they still have fasteners in bins. I bought the rivets for my T frame there--had to know who to ask and where to go (in the basement) but they still had them!
Both places seem to be still doing well, although I know Ron wants to sell the Dunsmuir Hardware store so he can retire. If you want a hardware store, 530-235-4539 (No, I have no connection--I just still remember the phone number--it used to be CEdar5-4539!)

We here in Vermont have a store in Norwich, called DAN&WHITS,they advertise if we don't have it you don't need it,I live in a log cabin and use Aladen lamps,they have the mantle's for them,the boxs look like there 100 yrs old, they have the wicks for the other type also,I found the size for my side lights for my t there and they still have the good clear old kero too, not the colored modern crap,but its 550 a gal,its so neat to just wander through this old store and take in the smell, and the place is huge and some things havent moved in 75 years I bet, DAN AND WHIT have both gone home, knew them both,DAN cut the wood for winter and always had at least ten or twelve cord ready in his back yard all hand split,he did this up until he was over 80 yrs.the kids have taken over and aside from a few changes its still pretty much the same store.three floors things hanging every where.its the only store in town,and there's not room there for another.

A hardware store was at the same location, Central Avenue and Summit Street, for well over a century. In 1871 it was Sipes Hardware. 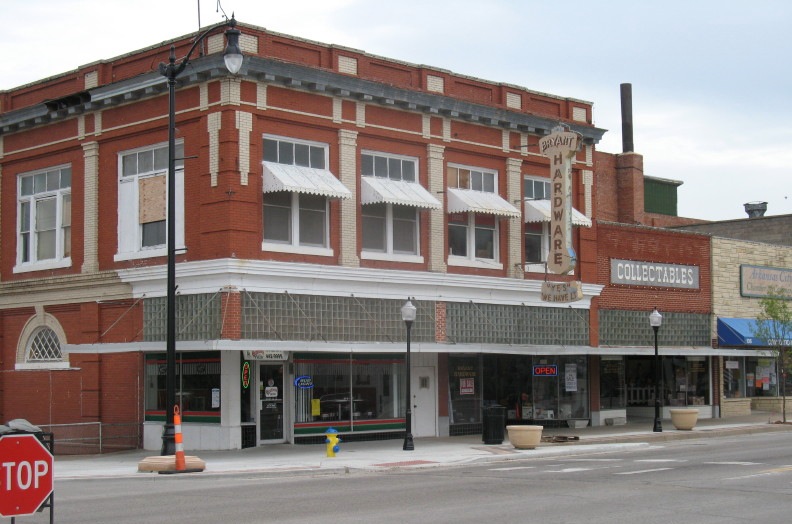 By the 1920's the old wooden building had been replaced by a brick structure and the Bryant family was selling the goods. Their slogan was "Yes, we have it." 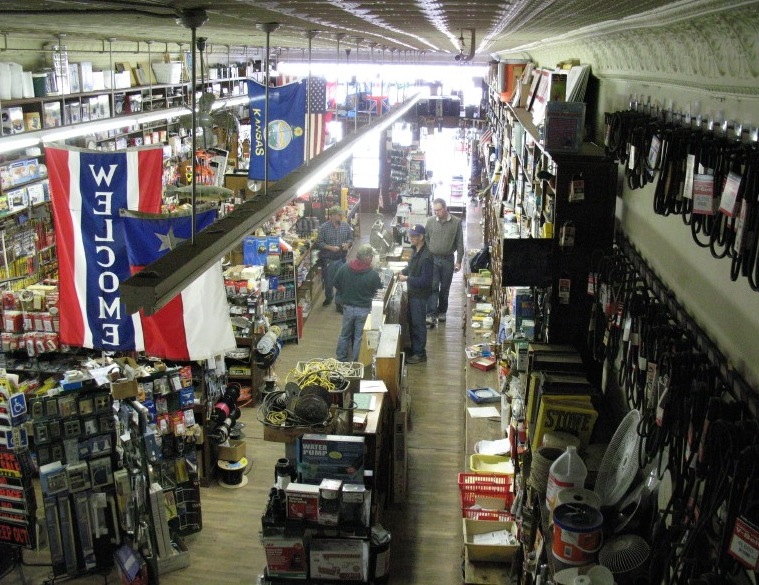 From the pressed iron ceiling to the wood floor to the cellar it was filled with the vast selection of hardware that was common in such places all across the country. 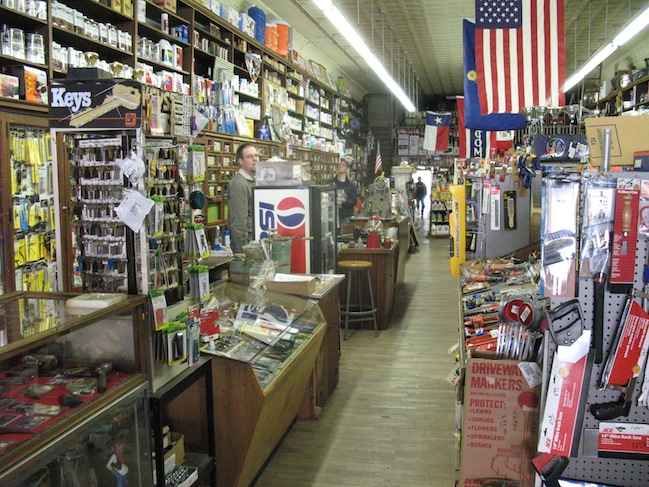 To the right of the flag you get a glimpse of the rolling ladder used to reach the upper shelves. 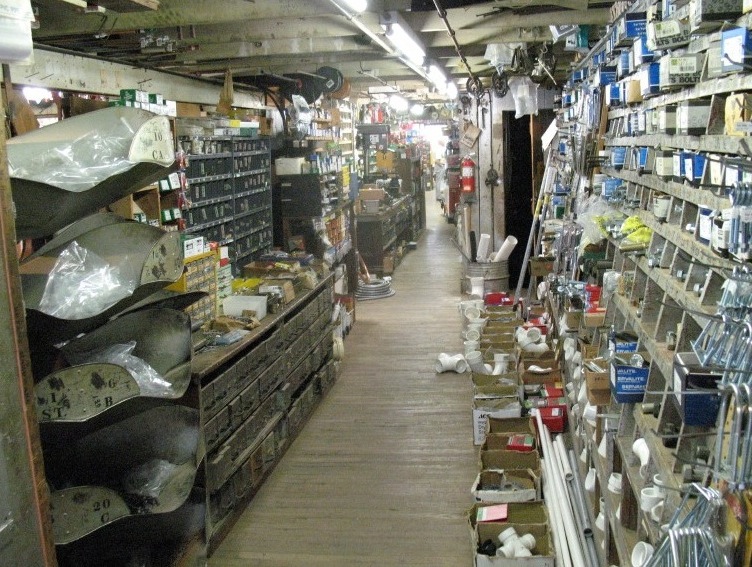 All kinds of nuts, bolts, and other fasteners, floor to ceiling.