G'day
Can anyone tell me which wire wheels are older Hayes or Dayton. Could anyone put a date to them.
Thank you Michael.

We know that Dayton, House, Houk and a couple of others were involved in the consolidation and incorporation of Wire Wheel Corp of America (commonly referred to as Buffalo, their location Buffalo NY) in 1918. Kevin ( on the other posting) is probably accurate that Dayton started in 1916 with pin drive wheels, dental came out in 1924. Houk was a new introduction for 1914 after the purchase and redesign of the McCue wire wheel. House dates from about 1915.
Hayes starting about 1917 sounds reasonable. These would be pin drive type wheels as the demountable rim type post date the 1919 Ford introduction of demountable rims.
Too much info but you get the idea.

Somewhat off topic but when were Pasco wire wheels produced for T's and for how long.

Houk advertised their wire wheels for Fords on the cover of the 1st edition of the FORDOWNER magazine in April, 1914. 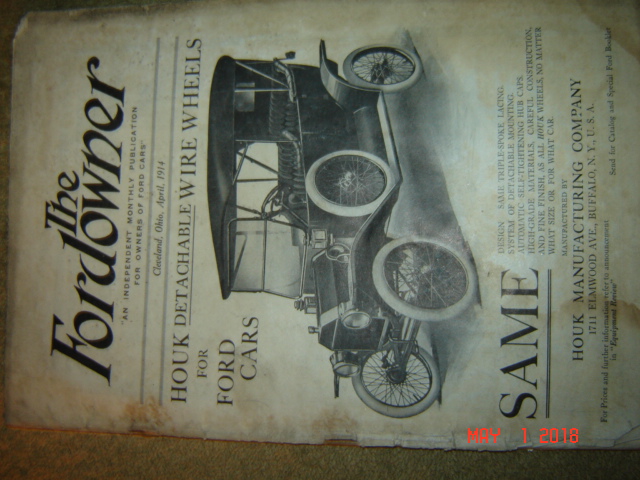 It may be a personal thing. I don't really know why. But I have never been wild about wire wheels on model Ts, especially of the brass era. Maybe it is because I have looked at thousands of early photographs, and so few Ts before '26 had wire wheels.
However, the history does interest me some, and I like all aspects of automobile history of that era studied. And wire wheels were offered after-market for Fords and other cars even before the first Ford model T (I have seen a couple pictures of model Ks with wire wheels). Wire wheels were used on small and very slow cars early in USA automotive history, however, design didn't quite keep up with increasing speeds. So, in the USA where huge amounts of proper hickory was available, wood spoke wheels became the norm. In England and Europe where adequate woods were in short supply, wire wheels remained much more common. It is interesting to note, that across the pond, wooden spoke wheels were most common on the most expensive cars. Rolls Royce and many other high end cars often used wooden spoke wheels until about 1920.

A bit of rambling on my part (I would never do that? Would I?).
So, now to my question.
Does anyone know what kind of wire wheels were on Edsel Fords customized '15 touring car that he drove to the Fair in San Francisco? I know the question has been asked before, but I don't recall seeing a really good answer.

Got the idea.
Thank you for your help.
Michael

Before 1914 and the introduction of Houk center detachable wire wheels there existed at least 2 brands of wires for Model T Fords. Mott and Universal both were primitive by our standards as early wire wheels often had 40 or fewer spokes and were not detachable. That means that the wires laced into the rim on the outside and directly in to a center at the middle with this center then bolted to a T wood wheel hub and not intended to be removed in repairing a flat tire. They were often 30x3 fronts and 30x3 1/2 rears. Remember that fixing a flat on the road was the norm. These wire wheels appealed to drivers who either liked the looks or thought that wood wheels were not up to the task. See Edsel Ford's speedster page 10 of "Model T Ford in Speed and Sport" and page 13 of " Model T Speed Secrets, the Fast Ford Handbook".

I have a pair of wire wheels that appear to just replace the front hubs, they look like you put the wheel bearing in the hubs. The rim appears to be U channel. I'd have to take a pic of them when I get to the upper garage.

The following is from Buffalo, NY records on the buildings at 1700 Elmwood, now on the National Register of Historic Buildings:

The nominated buildings are intimately associated with the American entrepreneur George W. Houk, whose career, stated one obituary, “was filled with action and the romance and endeavor.”

Born in Wellsboro, Pennsylvania, in 1865, Houk began his adult life in Elmira, New York, as a salesman of the Eclipse racing bicycle made famous by the English cyclist John Thompson Keen.

In 1892, Houk, who was a persuasive salesman, moved to London. There over a period of twelve years he became wealthy selling this speedy early racing bicycle to many British customers. During this period, he also became interested in the new automobile, and when he returned to America in 1909, having lost his fortune, he first became associated with the Oldsmobile car. In 1913, while living in Philadelphia, he introduced the British Rudge-Whitworth detachable wire wheel to the nascent American auto industry. Earlier in England, the shrewd businessman had secured rights to market and manufacture this novel wheel design in the United States.

Heretofore the wooden wheel had been standard equipment on automobiles, as it had been on horse-drawn carriages for ages prior. Meeting with success and seeing a golden opportunity, the always impulsive Houk left Philadelphia and, with the help of willing investors, established his own business making wire wheels in Buffalo.

Purchasing the factory at 1700 Elmwood Avenue that had been the local home of the defunct McCue automobile company of Hartford, Connecticut, Houk became the first person in America to manufacture wire wheels. The L-shaped building, which had brick walls with an inside exposed steel frame as well as wooden post-and-beam floor and roof supports and which extended south to Grote Street, had originally been erected in 1910 by R. J. Reidpath for the Superior Motor Vehicle Company.

Houk’s business prospered as automobile producers soon recognized the advantages of metal and wire wheels over older wooden spokes and rims. The Houk Manufacturing Company soon was selling its product as an accessory to many car companies in Buffalo and elsewhere. In 1916, a company advertisement in a New York City newspaper declared that “Houck Quick Change Wire Wheels are now standard equipment on the oldest, best equipped, and most influential of the Great American Automobile Manufacturers.”

houk2Wire wheels possessed many advantages over old fashioned wooden wheels. “Statistics prove that use of these wheels effects a savings of at least 15 percent in tire expense and as this then is the most important in automobile up keep the economic value of the wire wheel is self evident,” stated the Buffalo Express in a long article on the subject. The wire wheel was light weight, and thus increased gas mileage while at the same time it dispensed with “sledge hammer” jolts crested when wooden wheels encountered a bump. Wire wheels also kept tires much cooler than wooden wheels because the metal rims and spokes transferred heat away from the rubber tires as they turned.

“The difference in temperature is important,” pointed out the Express, “as heat destroys the durability of the tire.”3 Moreover, wire wheels were much stronger than wooden rims. “The spokes are so arranged,” explained the Express, “that the wheel will not only support the weight of the car, but will likewise withstand the severest side strains resulting from the side sway or skidding of the automobile.” Houk wheels, asserted the Express, were “practically unbreakable.”

When George Houk purchased the former McCue factory complex that bore the address 1700 Elmwood Avenue in 1913 he quickly transformed the structures that had originally been built to make automobile axles into the world’s largest manufactory of wire wheels. A description of the operation published the following year stated that it covered 90,000 square feet of space and employed 500 workmen who turned out 5000 wire wheels daily.

The Great Depression proved to be the swan song of the great wire wheel enterprise. National economic conditions and changing tastes and standards in automobile design conspired to relegate the wire wheel business to the sidelines of the American automobile industry. By 1931, the Wire Wheel Corporation was no longer in business and the Elmwood Avenue-Grote Street buildings were listed as vacant on City records.

In actuality the McCue automobile had been discontinued in later 1911 but the McCue Manufacturing Company continued on. They started making wire wheels and in 1913 McCue wire wheels were offered on Stutz, Henderson, and Keeton automobiles. There could well have been other makes offering them since McCue wire wheels were used on some race cars and offered as aftermarket.
With the purchase of the building came the McCue Manufacturing Company, Mr Houk redesigned the McCue wire wheel for simplicity and manufacturing efficiency and the product out the door became the Houk Wire Wheel. Houk Wire Wheels can be considered a new introduction for the 1914 model year ( fall of 1913). The building in question was already a player in the manufacture of wire wheels when Mr. Houk showed up on the scene.

Thank you.
Houk wires would be correct for first month of 1914.
Houk and Buffalo wire wheels are from same factory?
How many spokes do these wheels have.
Are the Houk wheels easy to find?
Sorry about all the questions, I find the history very interesting.
Regards Michael.

Hi Michael- Actually, #3 Houk would be the "regular" size for Model T, and they are close to impossible to find. #4 Houk were used on many "T" dirt track cars, and a lot of different production cars, and are easier to find but still not actually easy.

Keep in mind there are other companies which were making wire wheels at the time: Hayes, Motor Wheel Corp, Spranger, Phelps, Universal, Dayton, and others. All interesting, but unique to themselves and not matching to other makes. Just makes the hobby more challenging and more fun!