From the Canadian Library Archives, captioned:


Here is an extremely early Prototype (one of about 50 built) of what would eventually become the Fordson tractor.

These prototypes were built in 1915-1916 to test various designs as Ford's team, lead by Eugene Farkas, struggled to get a workable tractor to market as quickly as possible.
Among many unique parts present, this one has a fabricated front axle which would normally identify it as one of the earliest of the prototypes because after about tractor number 16, they had been fitted with the more familiar cast-iron, one-piece unit. That said, it also has LH steering and the downward and forward exhaust which means it is from the later, second generation of the "Farkas Prototypes" which first appeared in May of 1916. Maybe they had a problem with the cast axle (testers found that the bearings were not fully protected from dirt and grit on the original designs) and retro-fitted an earlier front axle.Because the design was yet to be finalized, no two of these proto-tractors were identical and parts were often re-fitted in the field as needed.

In 1916, these tractors were being taken around the country to fairs and various competitions to create some buzz about the forthcoming Fords and typically had their assigned numbers painted on the radiator tank or the hood sides, but, of course, this one is lacking that helpful identification. The badge cast into the radiator top is also the later, oval (vs. round) version and it reads "Henry Ford and Son".

All in all, a rare old photograph, possibly never published(?), of a VERY early tractor on a farm in Canada, pulling a Dominion made (Cockshutt, from Brantford, Ont.) plow.

Despite the coats and the apparently chilly weather, the operator will no doubt soon be feeling the heat of that yet-to-be-relocated, top-mounted worm gear! 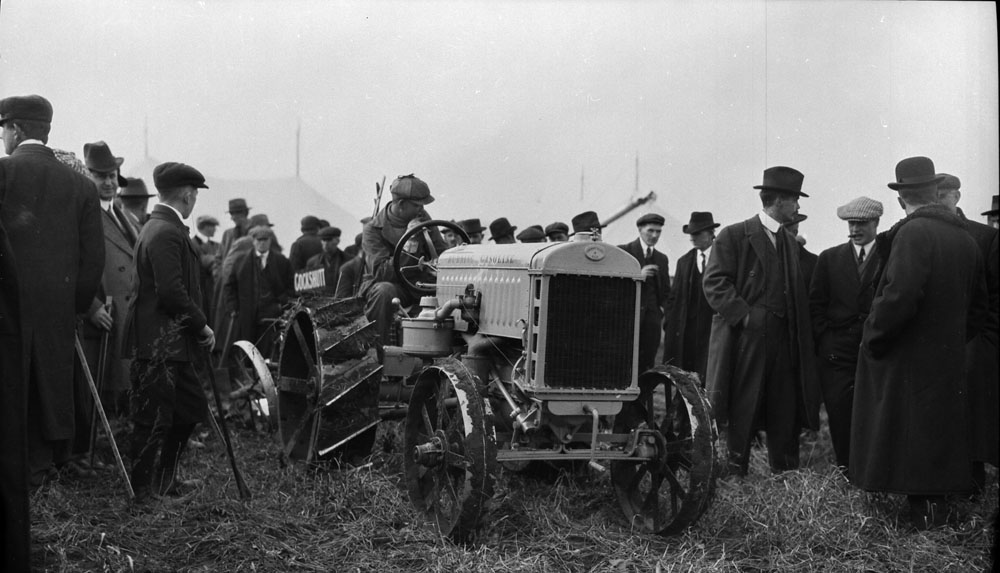 The fella in the background, just to the right of the radiator kinda looks like ol' Henry himself, if he was wearing a derby.... 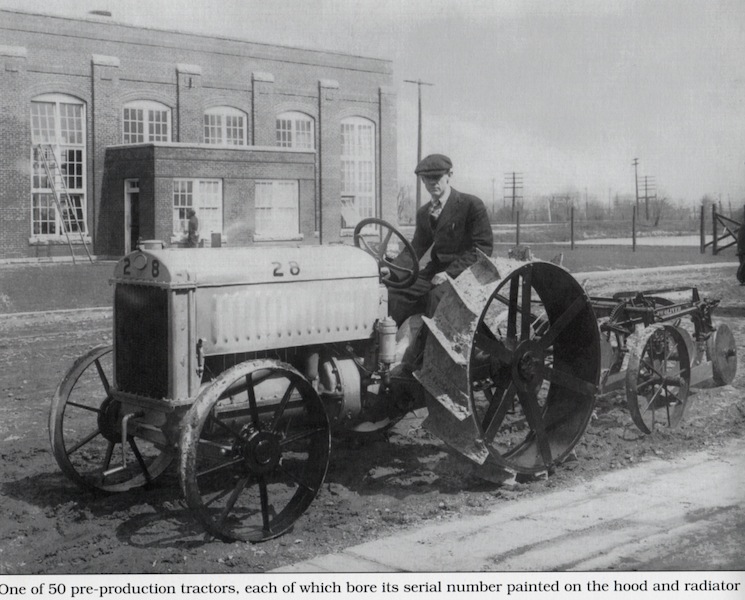 I meant to say this tractor now has Right Hand steering! It was switched mid way through the pre-production run by Farkas from the left side so the operator could better watch his plow.


The two pictures John P. added are of the earlier circular cast radiator badge, and a picture of Mr. Jim Smith who ran Ford's Prototype machine shop in front of the still under construction Dearborn tractor shop. This photograph was taken on April 4, 1917.


The plow behind #28 is an Oliver two-bottom plow, of the same type Charles Sorensen took to England (along with a Cockshutt three-bottom, like the one behind the first tractor posted) to demonstrate to the British Ministry of Munitions a few months earlier, in February of 1917. That plowing demonstration would lead to the order for 10,000 "M.O.M." tractors by Great Britain during The Great War..