I usually make one of these before I make my assembly drawings. Why? Well, because it helps me see what inside the little beastie. Never thought that anybody would be interested in them, so I never posted any of them until recently when Jim Lang expressed an interest in the 1914 Steering Column. So, I thought maybe I should put them up here to and get some feed back from you guys as to what really goes where...as far as I can tell (from pouring over my Ford Sketches and drawings) this is pretty much what's inside of the ball bearing front hub...I may be missing some things here and there, because the drawings and sketches are the clearest things in the world, but I think I've pretty much got most (if not all) of there.

This is just the ball bearing version, I'm working on the Timkin version now and from what I've read the ball bearing version went from 09-25 (the later cars were open cars and non-electric as well, so someplace about 20-25...I think, possibly earlier though), anyhoo, I'm just calling this a Ball Bearing Front Hub Assembly Cross Section, with no date reference other than the change dates on the factory numbers...and they're all over the bleeding map anyway. 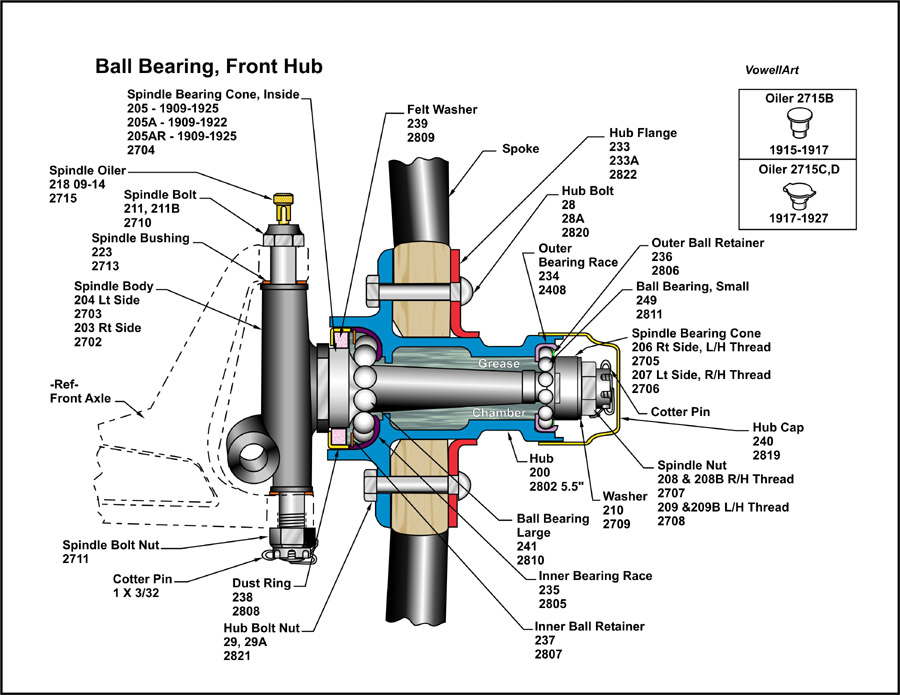 If it turns out that I've got pretty much everything right, I'll go ahead and make the iso of it and depending upon how much it changes through the years, I'll make more than one...but as it looks now, I think I can get away with maybe two, one ball bearing and one Timkin bearing one. After that we'll see where it goes from there.

As always, please let me know where I've gone off the rails if I have and or what needs to be fixed or seen, thanks.

Martin: Very informative drawing, thanks for sharing.
How many bearing balls in each brg? Isn't the non-threaded region of the hub the same diam as the outside D of the hubcap? is the notch for wrench for adjusting the outer brg race on the washer end of that race?
Could you/would you consider watermarking or otherwise identifying these draft drawings as such? And the final completed one as such with the date? thanks,jb

James, this is a cross section, not the finished illustration that I usually post. I make these to help me see all the goodies and where the hell they're at in any given assembly). The iso drawings will have the correct number of ball bearings and true up some of the details (I hope). I don't know about the hub cap, but I'll look into it and see, there are about 5 or 6 different hub caps for 1909-1925. The problem is there is just not enough room to put them all on any one cross section and beside since it is a cross section you really wouldn't see much of the differences anyway...I'll see if I can include them on the iso, that may be possible and it also may not be too, I'll see. From the drawings I've seen (and what I could clearly see of them), this is what it looked like to me.

As to the adjusting cone, it has a flat on both sides of it for adjusting the cone and I may have made it a bit too small, but then those drawings were really hard to see clearly (I'll have to pull the heat treat drawing and take a look at that one and see)...the one on the rear has none or course and fits against the spindle flange and seems to butt up against the dust ring, which should be flush with the rear of the hub.

Frank, you're right there are different versions of this spindle and those numbers are probably the early car numbers anyway, which means I should probably draw in the arms as well, then make another drawing for the later version of the "ball bearing" spindles and of course those later numbers would be the Timkin bearing spindles (that one I was figuring on already).

If anybody has any pictures of these parts, please post them, because the drawings I'm working from are really pretty dark in places and some of it is even missing or torn, thanks.

That is wonderful Martin. I love seeing all your drawings. Ford stated to fill the hub cap with grease. Maybe you should make the interior of the hub cap look like the grease chamber. It won't detract from your drawing.

The threaded end of the hub is smaller so the hubcap is flush with the body. 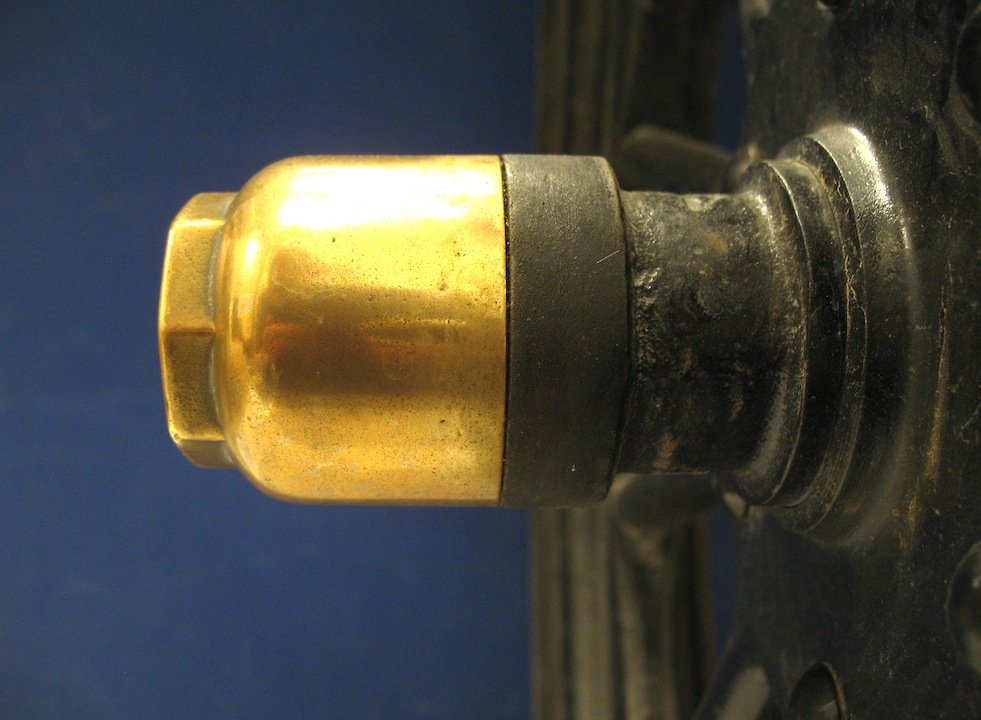 I agree with Steve about a land at the end of the dust cap thread. Also I think the radius behind the slant on the spoke should be a little greater. Most of the spokes were flat and not dished to the inside as it indicates on the drawing. Some early wheels with oval spokes were dished to the outside, but none to the inside.
Your talent just amazes me, they are just wonderful drawing.

Martin, your drawing shows the flats on the spindle, introduced to allow the inner cone to be driven off. The earlier spindles did not have this facility. I don't know when the change was made or whether it has any real relevance for your drawing.
Keep up the good work. A compendium of your works will be of great benefit.

Steve, on your car and mine and probably also as early as 1911, that's true. But do you think that is also true for 1909-1910? The drawing I've got shows that particular section pretty clearly and the cap does not fit flush with the body. Now that doesn't mean that somewhere between that drawing and production somebody didn't make a change to some other drawing that I haven't seen either so, you may well be correct. If anybody has a clear shot of the front hubs of a 1909-1910, please post them...I'd like to see that section.

Dave, I was meaning to fill that cap also, but in my haste forgot. If there's one thing those ball bearings need it is lots and lots grease for both sides. The idea of the "Felt Washer" and the "Dust Ring" is as much to keep the grease in as it is to keep the dust out.

Allan, good to know, I'll have to check and see when that change came about, if for no other reason than to make the iso's more correct.

A "compendium" eh? Funny you should mention that, for that is indeed my plan...eventually, when I get a running chassis worth done and can start in on the bodies (i.e, tin, wood, interior and tops) which would be the obvious next project. And of course we can't leave out the TT in that chassis book...there just too many similarities between Model T and Model TT to skip that one...at least I think so.

Even though the early hubs didn't have slots for puncing out bearing cups, I can see it's still possible to punch out the outer bearing cup, but how did they remove the inner cup? The welding/shrinking method wasn't available for most workshops back in the day?

I thought it was very nice and please show us more of your work! Bud.