I find many body shops don't know this little trick. A stud gun used to remove dents can be used to shrink metal. Hold it on the spot you want to shrink (without a stud in it)and pull the trigger. It heats the metal cherry red, when the color goes out, wipe it with a cold damp rag. This is especially useful when you have a panel to shrink that you can't get in back of with a dolly. The fender shown is for my 56, it was off of a wrecked car, and it was bent in the center. There was a bulge the size of a tennis ball before I started. Another very useful place to use it is where bolts too long were used to hold the hood on, and poked up into the sheet metal, the same with the air cleaner stud. One quick hit with a stud gun took care of them. This saves a whole lot of hammer and dolly work. There was a recent post on shrinking aluminum. I have never had the need to do this, so I can't say if it would work on that or not. While doing this fender, my mig welder died, so I ended up brazing up the extra side trim holes. 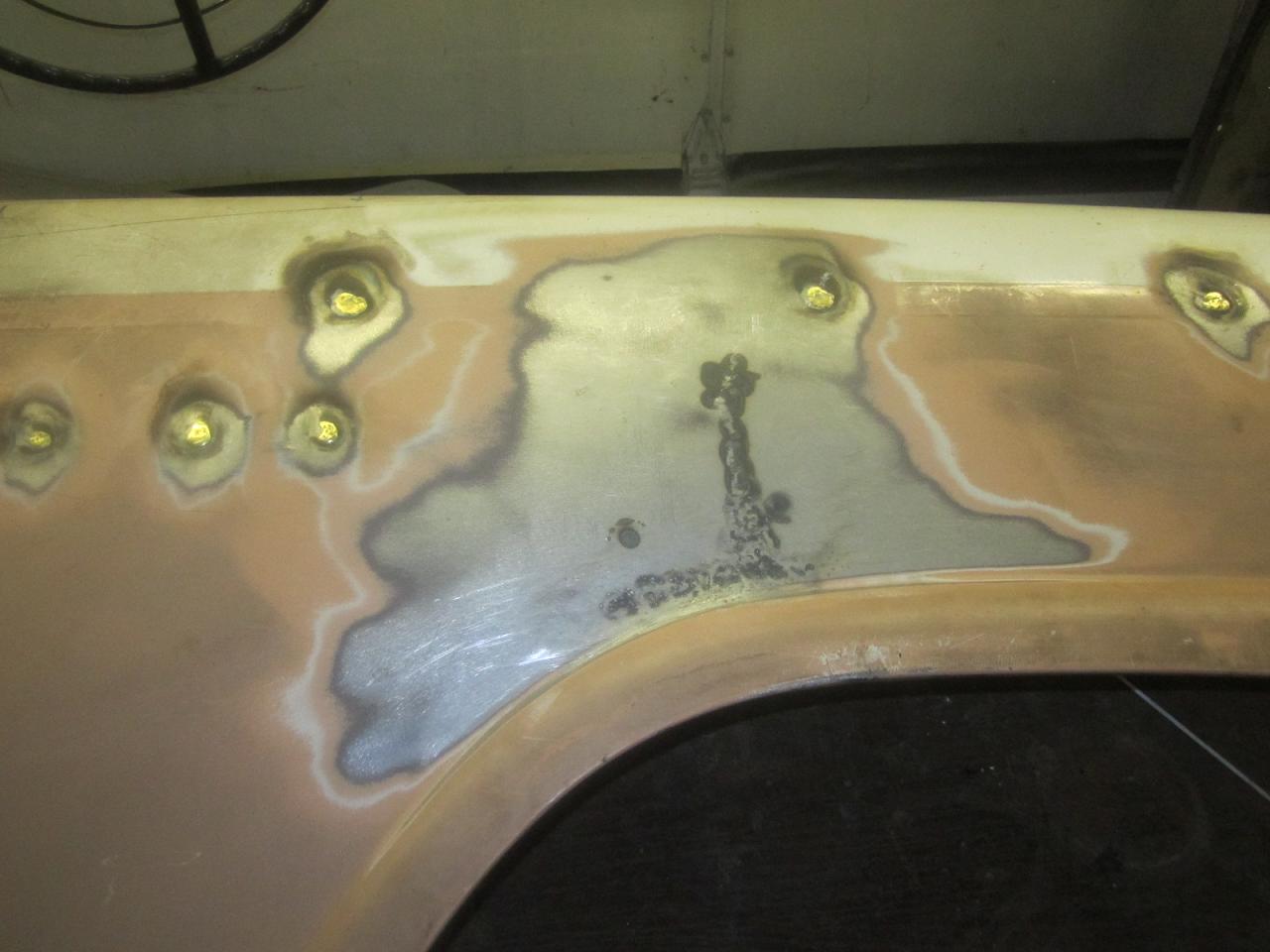 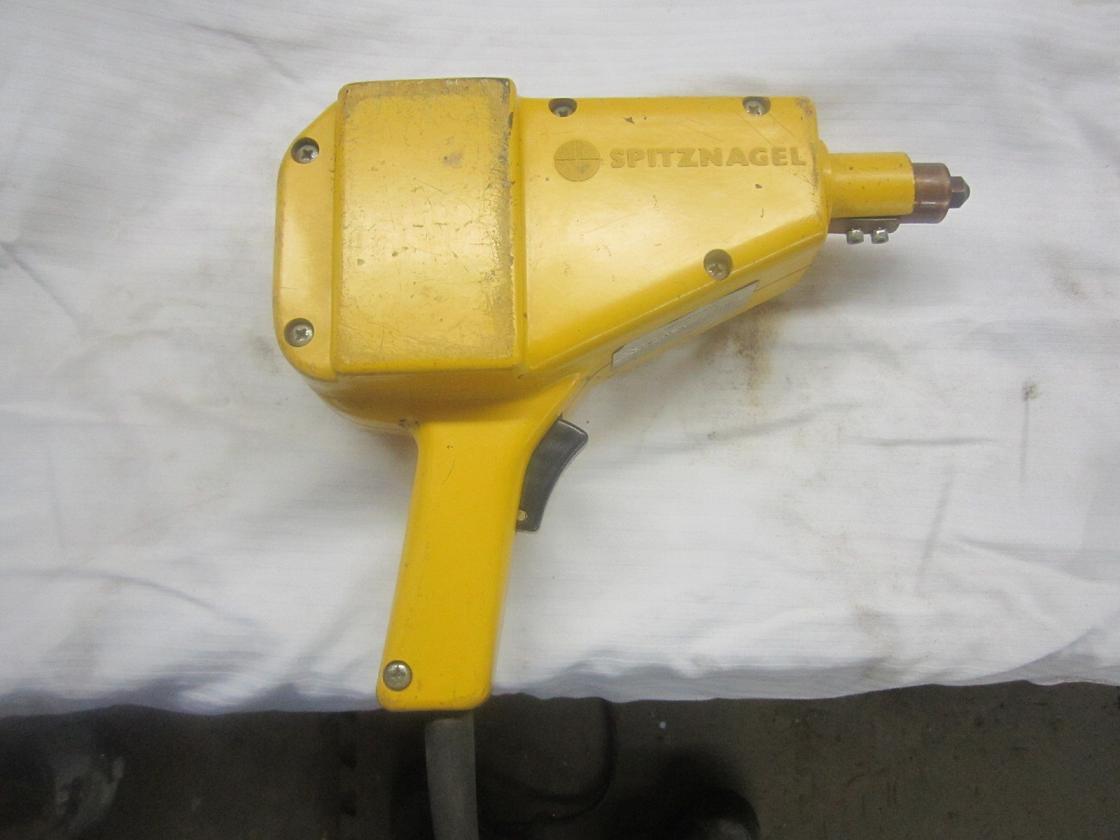 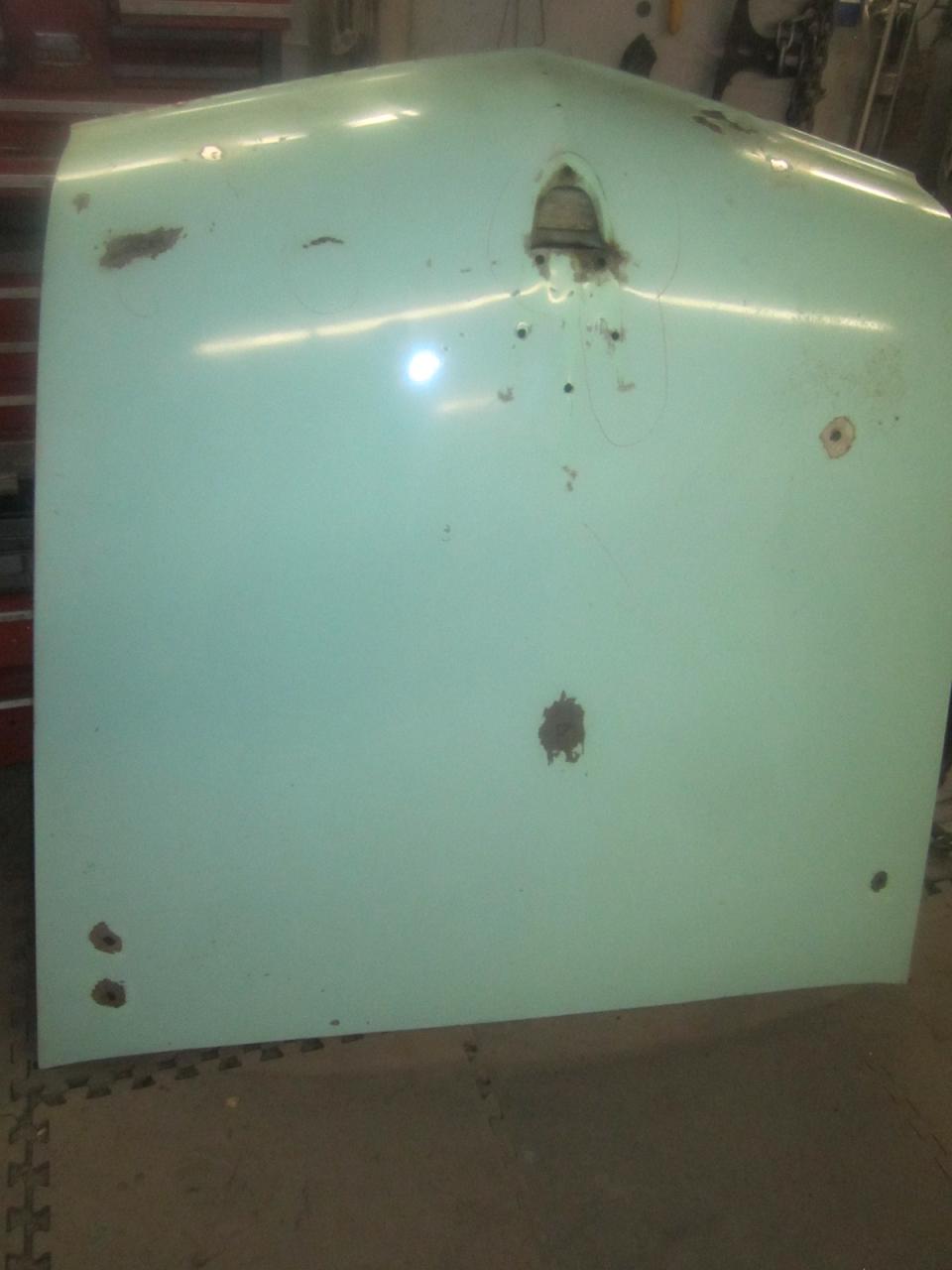 Kool Thanks for the HOT tip.

Son of a gun. Pun not intended.
And I actually thought Spitznagel was a fantasy word.
I have an antique tractor fender inner panel that the "body man" attacked with the pointed end of a body hammer.
Thanks Dan! Very interesting.

I might actually try this since I'm not a stud.

Dan sent you a pm
I have a stud welder from Harbor freight. I find it to be "ok" on thin metal but you try to pull the pins on a old 47 Pontiac or 77 Impala, metal is to thick I guess.

Funny thing is, the label on it says "Stud Wedler" Miss-spelling from China!

That might just work on aluminum, as you speculate. I have always thought that the reason heat shrinking didn't work on aluminum was because the thermal conductivity of aluminum was so much higher than for steel. So the lower temperature of a gas torch just makes a large warm area rather than a highly localized hot spot.

I'm glad this info is helpful. Vern I hope this works for you, but I don't remember the company making such claims, but...........
Mack, I'm not familiar with the HF one. The one I have I believe was from when the company invented them. It is professional grade for body shops. When using it you decide by how long you hold the trigger how much heat it generates, in fact you have to be careful not to burn a hole through the panel with the stud, same as when you shrink with it, you have to gauge how long to hold the trigger. If you don't hold it long enough the stud will pull off. I have used it on 30's and 40's car's, it didn't phase it at all.
Dick, I almost think it might work on aluminum. The problem would be deciding how long to hold the trigger as it wouldn't show cherry red like metal. If the aluminum melted it might mess up the tip

Would it be possible to place a thin sheet of copper plate between the tip and the aluminum? The copper would act as a heat disperser and hopefully the aluminum wouldn't melt or the tip stick to it.

FYI, the melting temperatures of steel and aluminum are widely varied.

I have never used a stud welder but it you may need to be quick on the trigger with aluminum.

Hi all, yes the heat and quench shrinking gets the job done, but not without damaging the metal.

I was fortunate to attend a class on metal shaping years ago by a Master of the trade. I'll never forget that first day. Standing in front of us with a large sheet of 18 gauge steel, he asked how many here were journeyman body repair men. About half attending raised their hand. You don't know crap!, then with a huge hammer whacked a 2" deep dent in the metal.

Then around the room he asked several how they would do the repair. One at a time different variations of heat and quench were offered, each followed by WRONG,WRONG,WRONG! Then with a hammer and small leather bag, worked the metal back board flat right before our eyes!

The secret was patience first of all, and understanding metal is a living thing made from atoms with electrons. Rather than hard metal strikes, he used very light tapping, using the hammer to push the metal back together. In other words he worked the metal towards the center of the dent. You must give the metal time to adjust to being forced back together. The atoms need time to adjust.

Have you heard of ruffle and trap? It's the fastest way the shrink metal. Using a 2" flat faced wooden malet, take a small piece of sheet metal, make corrugations similar to the edge of a stove pipe. Lay the metal flat on strong metal table, then go across the pounding the edge with the malet. Give it a try!

This ruffle and trap method is how he was successful in removing the dent in the 18 gauge metal. It's all about pushing the metal back together. Slowly.

I don't profess to be an expert, but I learned enough to make car restoration much easier. If you really want to learn metal magic, buy a harbor freight air planishing hammer and play with that! Wear your ear protection, and be prepared for neighbors complaining.

Have a great day, Michael Paul

An important note, huge difference between 40 degrees and 80 degrees in your shop when working metal. Use a hair dryer and heat to a 100. It makes a difference.

One more planishing hammer follow up. (Waiting for my first appointment)

The planishing hammer works great for fine surface finishing. Some of us have worked a dent out very close but not perfect. If you don't skim it with Bondo the small ripples show though the paint job. Planishing is like ironing the wrinkles out of your clothes. The secret is to turn down the air pressure so the hammer lightly chatters, then work the area very quickly, and not for very long so you don't stretch the metal.

You can practice by taking some sheet metal scraps, make a small dent, tap the dent out as best you can. Then run it though the hammer moving very quickly. Don't stop in any spot, constant movement. It's amazing how it works.

Another secret to planishing without stretching is to coat both sides of the metal with a light oil, spray can works best. What this does is create a film that keeps hammer dies from hitting the metal directly, sort of a cushion.

I have this great CP planishing hammer that is hand held. It's from the ww2 era. It's great for ironing out a fender while still on the car. I see them on eBay occasionally.

My apologies for stepping on the heat shrinking thread, the spot gun works great for large area oil canning. Fast results, it seems much better than heating a larger area with a torch.

Denny, I don't know if the copper would work, it might act as a heat sink. You would have to experiment with it to know. The spray used on a mig gun might work to keep the aluminum from sticking on the stud gun.

Mark, you are right, you would have to be fast.

Michael, This is a picture of one type of leather bag you mentioned. You could have any size and type you wanted made up at a good leather shop. Theory and reality are sometime two different things. You can straighten metal and theoretically it would be great to repair all metal this way. You can on something like a Model A fender. However, working on something like my 56 is different. I had some spots on the quarter that needed repair. To get at it, all the spot welds for the bracket that hold the convertible top assembly would have to broken and the frame work removed. Definitely not practical. The same with the hinge bolt spots on the hood. Unfortunately there are no absolutes in life. While we are on the subject of absolutes, I was waiting for someone to mention that you can't paint or use filler on braze as I hear this often. The problem is if you don't remove all the flux this is correct. The best way to remove the flux is to sandblast it, plus sandblasting leaves a surface that promotes adhesion. The backup for what I am saying is I have owned a body shop and have taught auto body at a NY trade school. My reputation for body work is well known. I haven't just started doing this. Don't worry about high jacking the thread, all information is welcome 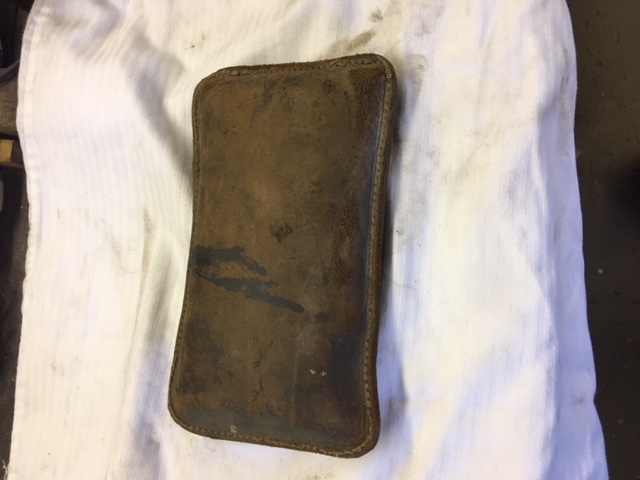 Hi Dan, yes that looks like the bag, I forgot to ad he used some kind of sticky substance like pine tar that kind of grabbed the back of the metal and allowed the metal to be pushed back in place. He also showed a canvas bag that worked equally as well.

We learned some great information about working aluminum. It becomes very responsive and easy to work at 750 degrees. You can almost push the dents out with the hammer face without even striking it. I'm wondering if using a wooden mallet with good backing at this tenp would be the secret to shrinking? I'll have to try that...
750 degrees is easy to accomplish using an acetylene torch, if you burn the torch with acetylene only you can coat the aluminum with soot. Then using the rosebud, heat until the soot burns off, your there!

Another important note, aluminum work hardens fairly easy. You have to Anil often. Just heat using the soot method to 750 and then quench in water. Brings it right back to life!

I really appreciate your positive comments, thank you for starting this thread. It's great to share information. I have to give the stud gun method a try. I learned something new, good stuff!
Michael Paul