In the process of restoring a stock ignition system for a friend, I've torn the engine down to replace the rear main cap to bring the end thrust back to within acceptable limits to set the magnet to coil gap - this was what I found on the fan drive pulley - sure took the "rattle" out of a loose pin & pulley !!! 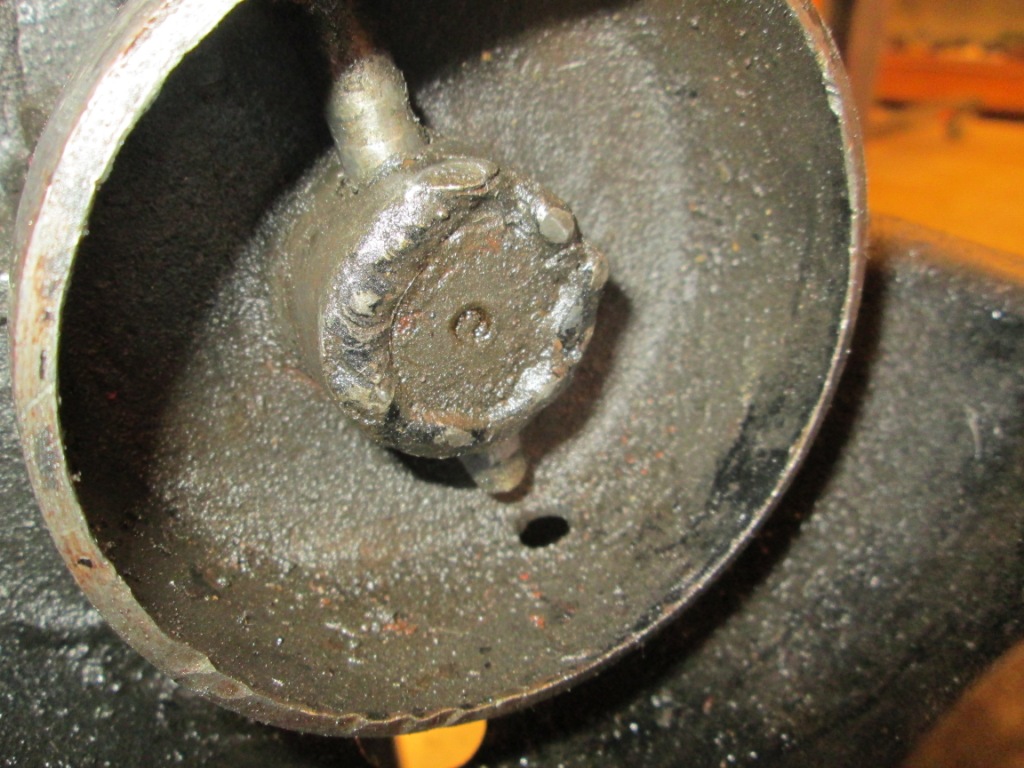 That's a nice fix for a car on it's last legs. I would hate to do an overhaul after that. We see some strange fixes don't we?.
Rich

Not much left of that crank pin. Put this in the same "repair" category as the statement - "Ain't nothin' you can't take apart with . . . a cuttin' torch !"

Looks like if you need to rebuild that engine the first two things you need to find are a crankshaft and a timing cover...unless you want to grind that weld off to save the timing cover!

I found the same thing on my '26 Touring a few years ago.

I believe the car had been "restored" in the early '60s at the owner's dealership, and pictured in my mind the guys in that shop, figuring out how to stop the pulley rattle, and one says to the other "well jeez, why don't we just weld the sucker — its not like we're going to be around 40 years from now when the next guy tries to get it off..."

Anyway, I ground off the weld and removed the pulley no problem. The crank checked out crack free and is still spinning happily after a light re-grind. 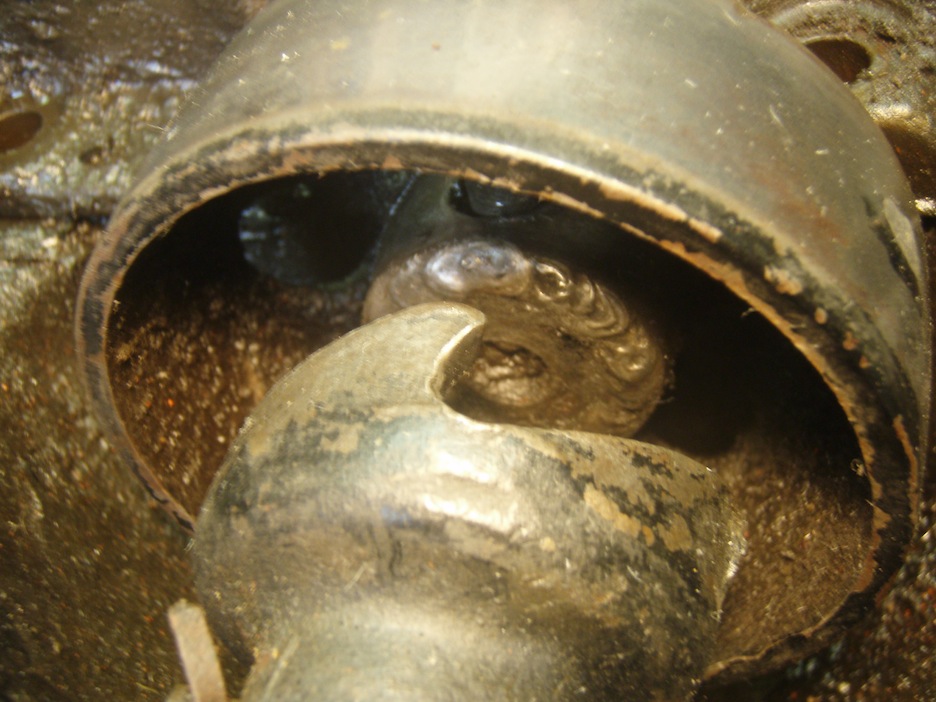 I removed the crank first so I could salvage the timing cover - several other issues to remedy before it's ready to reassemble ! I've seen some "shady" repairs but this is right up there. If I can find the photo, I was tearing down a tired engine for a rebuild and found the fan drive pulley loose which a lot are and when I removed (fell off) it, there musta been a hundred or more prick-punch marks on the crank nose and the ratchet pin was an old valve that was beat in the broken off !!!

Steve - The one that really sticks in my head is a "tip" in Ted Ashmann's book, "Tinker'n Tips".

I don't remember the exact wording, but basically, his advice was to just remove the loose and rattling pulley and just sort of "beat up" the end of the crankshaft by hammering on it with something heavy enough to gouge the crank which of course also raises little "burrs" or "spurrs" of metal on the surface of the crankshaft, which then ceases the rattle when the pulley is forced back onto the battered up end of the crankshaft!!!

I have never been able to decide if Ted was serious or if that what just more of his particular brand of "humor"! Frankly, I think it was some combination of both, because the really pitiful thing about this "tip" is that it would probably actually work,....(for awhile anyway) !!!

Looks as though the same guy welded both of these pulleys on Chris !!!

I believe the term is "strawberry" Harold. And I believe that practice has been discussed here previously - make as many marks you need BUT once you hammer the offensive piece back on, you just removed all the high spots to hold it tight !

Using a prick punch or knurling a surface to raise the metal is an old and time honored gunsmith/machinist trick. Of course, it shouldn't be used where common sense and a new part would be better....

Just goes to show a dumb idea that works can't be that dumb.

I too have seen one like that. It was at a swap meet and a lot of people got a good laugh at it that day.
I just use shims. Thin brass if it is only slightly loose. Rattle can steel if it is really loose. Works fine in the short term. Harmless in the long term.
There are however better ways to "properly" repair such an issue.

I have repaired a loose pulley by placing shim stock between the pulley and the crankshaft then pressing on. It is still working after many years. I also put a kink in the center of the pin, but didn't beat up the shaft.
Norm

Here is an other unusual repair. 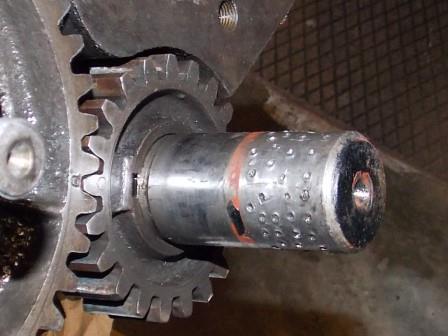 Andre, that is the "strawberry" repair that Steve T. mentioned. They do not work on anything that will actually be used much for the very reason that Steve mentioned. I learned that almost 60 years ago from local farmers and mechanics that showed me what happens. That "repair" was used either by someone that didn't know any better or, most likely by someone that was trying sell a piece of equipment to an unsuspecting buyer. Now, that being said, it does work well if Loctite is used along with it to keep it from working loose. JMHO Dave

I've seen that, and done that too.

Don't use the center punch method on hubs though. They wear down as all the weight of the car is resting on them. Shim metal with loctite has worked for me though... (Don't like it but i had no choice.)

How about broken brake shoes?
No problem - if there is an old fence nearby :-) 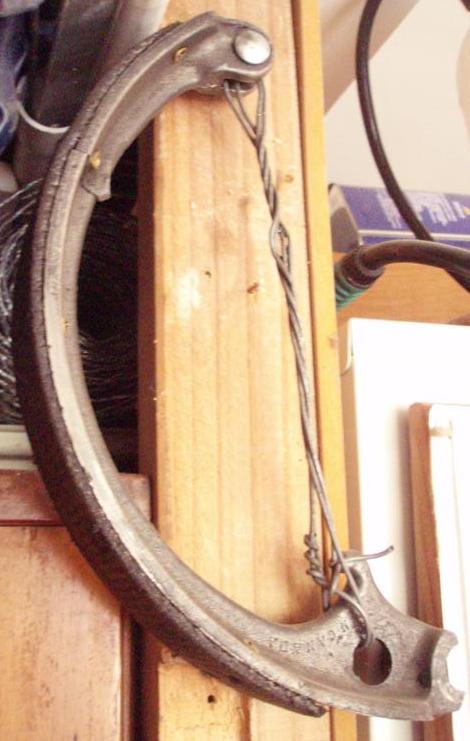 I have found the easy way to fix a wobbly pulley is to get out my 3/4 socket set and find the 12 point socket that just starts to go down the outside of the inner hub of the crank pulley. Press the socket on the pulley using your shop press and then drive it off. It shrinks the ID of the pulley and you will have to drive the pulley back on. I've done this trick many times.

What's wrong with that??
If everything else is OK,I wouldn't mess with it.
I've just tacked them on.Somebody in those pictures was REALLY fed up!

Not unusual, a little disappointing. Pulleys aren't that hard to come by. Easy enough to take care of at teardown.

Yes, already removed & one of Dan Mc's going to replace it !

Steve. common repair????? I have come across at least a dozen or so over the years . Repair Is a very poor attempt and a bad choice of words LOL, but sorry to say it is done.

looks easy enough to remove the weld if the crank is good enough shape to reuse.
we think parts are common nowadays. Back when that was welded,you didn't mouse clic onto a webpage and order a pulley. If you were in a bind,you did what needed to be done to get by.
I use Loctite when i have to peen valve guides in Over head valve briggs engines to get them to stay in the head. Briggs wont sell repair parts,just a new 250 $ head.Nope a few peens with a punch,some loctite and 7 years later 2 folks are still using the machines.