A friend has had this Model T languishing in his back yard since I've known him, over 30 years. His son Nathan, in his 30's, wants to pull it out of the weeds (and tree) and make a speedster. Gives me great hope for the future of car collecting! His story:

"Once upon a time a Model T chassis found its way to our back lot. A friend at work had drug it in then sold it to me. Now that I think about it, it may even be the one that I had tried to buy from an old farmer for $15 but then I realized I couldn't get it home on my bicycle and gave up on it. It had been re purposed into a saw rig. So had this one. The price had inflated to $35 twenty years later.

As I had other old car projects calling and no interest in sawing lumber or firewood, it then served as a jungle gym when my sons came along and of course a wasp habitat.

Fast forward to modern times, Nathan has taken an interest. He's been looking up Model T literature, ordering Model T in Speed and Sport , joining the forums and such. His interest has already delayed it's return to Mother Nature. We've begun the hacking away of the blackberry farm that overtook it and the chopping of the tree that grew around and through the rear axle. Yesterday evening we were able to loosen the rear spring from the frame and chisel away the tree trunk from the crossmember.

Next time, by loosening one radius rod fastener the chassis should be able to be drug away from the axle (and the tree). Hopefully we can then engage a local farmer to relocate it nearer the garage with his tractor and disassembly can begin.

With the word of this getting out, Nate has had parts donations offered. [My Idaho friend] and the guys at breakfast in Idaho threw in a front spring which has already been dropped of via courier. {A T vendor at Luray] gathered up choice items at his recent flea market stand and loaded him down. [Another friend] in Michigan wants to get some wheels coming....all this even before we get the bones exhumed.

This will be a good experience for Nate, time spent with him a wonderful thing for me, and as [a well known T guy] always says..."at least we aren't hurting anybody". 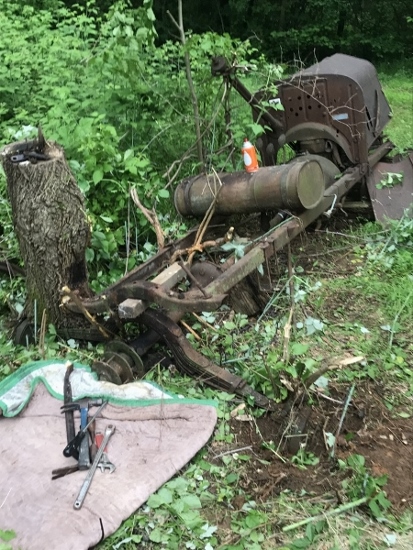 Well I can spot 1 small detail and know he is a smart fellow.That little orange can on the gas tank says alot without saying a word.
Looks and sounds like the chassis is now in good hands!

Thanks for posting and thank you so much for helping your friend Nathan rescue the T chassis.

Rationale: It has the 1924-25 size firewall and not the 1923 low cowl firewall as shown in the photos below: (Thank you Phil Mino for posting the photo). 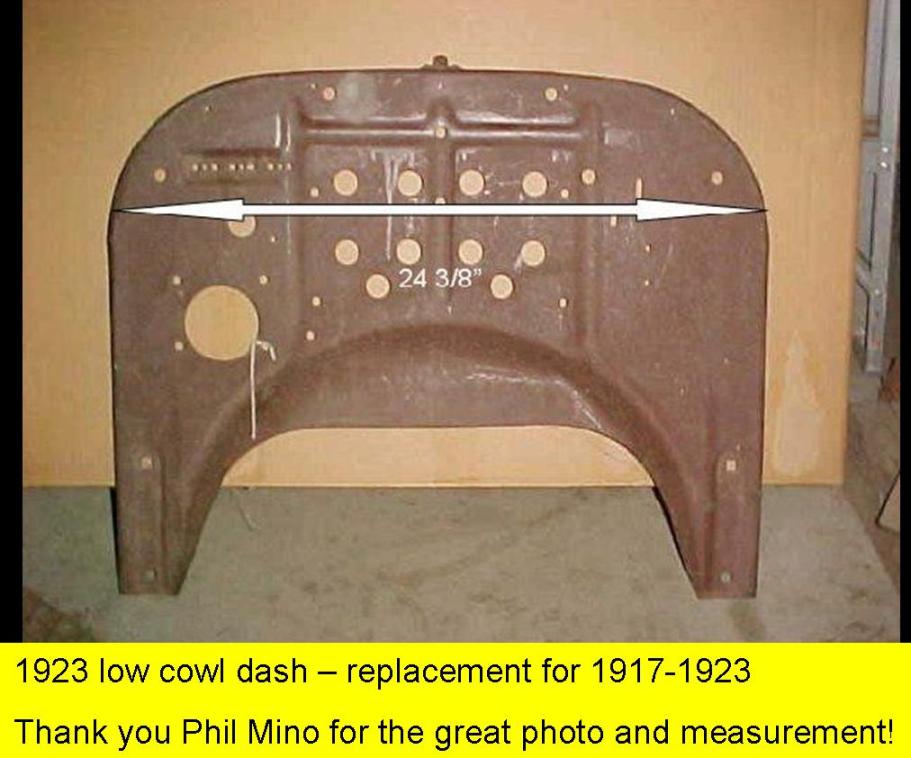 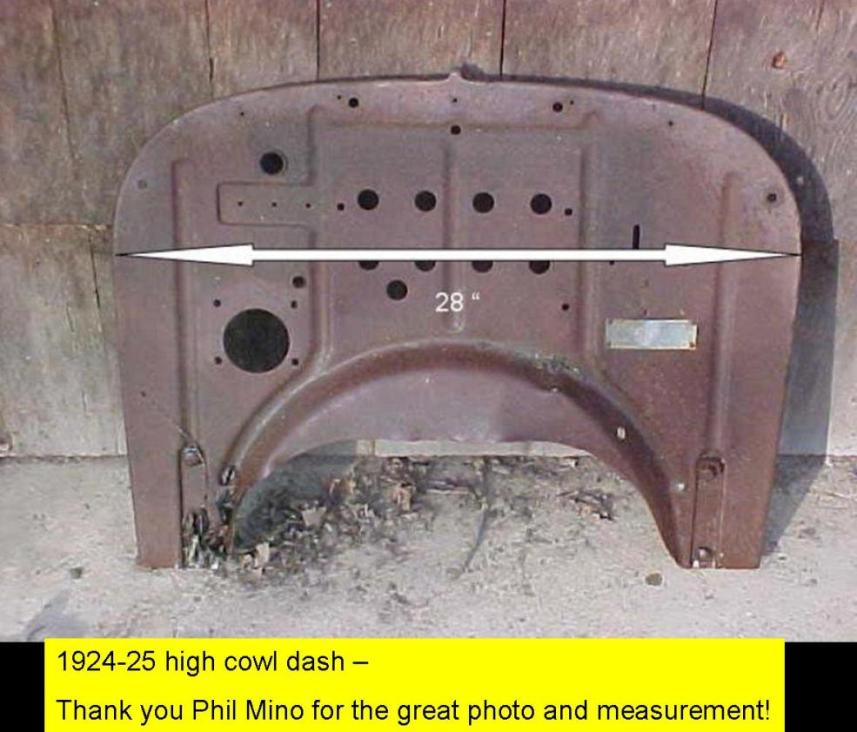 It should be good start for a speedster, depot hack, or even a rebuilt original body. And if they pickled the engine by removing the spark plugs and pouring oil (even used oil) into the cylinders and then put the spark plugs back in there is a good chance you can get it running (assuming it was running previously). My Dad purchased a Model T that had been sitting outside in a junk yard for years. The engine was frozen. He removed the spark plugs or possibly the engine head (I haven't heard that story in about 30 years or so), filled the piston area with kerosene and let it soak for several weeks (topping off with kerosene as needed). He removed the transmission inspection plate and it looked OK inside. The engine loosened up (and no they did not tow it -- just rocking the car back and forth by hand in high gear). He took it apart, cleaned things up, lapped the valves etc. It had been overhauled and did not have many miles on it before it went to the junk yard. It had good babbit and he reassembled it and it ran good. The car drove with that engine. So it can happen. But out of the 10 or so 1928-1931 Model A Ford engines I purchased one time -- none of them had good babbit left in the block. Oh well. Hopefully you will be more like my Dad than I was with the Model A engines.

And sometimes if you look around the saw -- you may find some body parts. Or if the farm had a dump area, you might look there for the body parts.

Finally -- yes, it would make a great story -- take lots of photos and send them and the story to the Aleesa -- our editor of "The Vintage Ford."

Just to clarify, at this point I haven't helped, but there's more to the story, and I'll be helping soon!

The best part to me is that Nathan's father is really into early cars, and now he not only gets to share that interest with his son, but also share time spent as mentioned!

Looking at the rear spring and crossmember, is this a TT?

Perfect! :-)
I was in my early 30's when I really got started (literally, when my dear boy Lizzhe started breathing flame out his exhaust ports).
I started with junk and love it dearly!
Life is busy when we are in our 30's and it's great when a fella is ready and willing to help breath new life like this.
I wish my own son (a Nathan too) had enough time to devote to a T project I handed him. But we both love the late 60's-70 Pontiac's.
So his low mile 68 Catalina rag-top takes his thoughts away from T's for now.

Perhaps Nate might like it even better to pull the head, get it loose, give it an afternoon valve job, pull the timing cover to see the "line" is clear and make it roar! Then do the necessaries. ??
Thank you for sharing your friend's story David!

Donald, no. The TT rear spring is made of two seperate leaf stacks, not one continuous stack. Also, the rear crossmember is MUCH bigger and heavier. Dave

I have to get my two cents in here. The high cowl firewall that Phil Mino posted is a 1924. The 1925's have only three rivet holes to hold the felt on at the top, whereas this one has five. Also, the aluminum patent plate for 1925 has clipped corners and is held on with two rivets instead of four. It is the same patent plate used in 1926-7.

Good on him for tackling this, the hobby needs more folks in their thirties, IMHO.

Nathan,
Both myself (FOX BODY SPEEDSTERS, WASCO, IL) and my Facebook group: Speedsters and Pre-War Racing Cars, are standing by ready to help with donation parts, advice and encouragement at your request.
PS: Looking forward to seeing your progress and getting together again for laughs & lunch at Luray Pre-War 2019.
Jimmy

Yes, Jimmy, enjoyed meeting you and a nice lunch, you have some interesting stories about your children!!

I'm going tomorrow to help move some stuff that's in the way of the T moving from it's resting place, I'm sure once it gets in a place they can work on it, the needs will be evident.

Remember, though, as Greg alluded to in his report, a restoration starts out slowly then speeds up to a glacial crawl! Thus, it may be down the road asking for help!

What a great project. Looking forward to updates and photos.