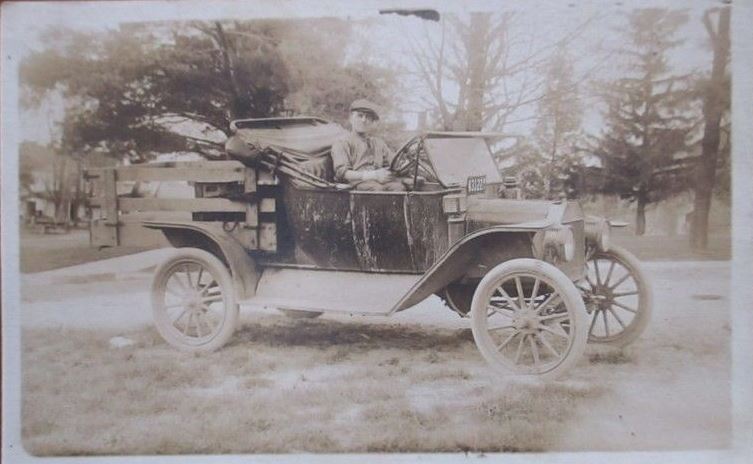 Herb - Nice old photo of (as you say) an "unusual truck".

Looks to me like a '13 roadster (runabout) with the turtle deck removed and probably just using the flat wood platform with extended wood plank floor and crudely constructed stake sides.

Being that that's a '13 with what we know had a factory flaw that usually allowed the rear of the body to sag, unless he's only hauling very light loads, I hope the owner has installed the "stiffening" modification for reinforcement!

Just. a ‘13 touring whose owner lost the back seat and built a homemade truck bed. Neat picture. I remember at swap meets 30-40 years ago you could find lots of touring rear seats with great leather upholstery still...

Interesting how we all bring our own perceptions to these old photos, which are always very instructive. Thanks for posting this, Herb.

I do believe it is a '13 runabout, but the "truck bed" seems pretty sophisticated to my mind - it has the usual shallow "home-made" pickup box, rather longer than many you see, but the removable rack appears neatly done, with hardware to hold the sides to the box, and corner brackets. I'm getting "twinges" again looking at this picture, my '13 runabout would be ever so much more useful to me with a "truck bed" instead of the tiny little turtle deck.

FWIW, the design flaw of the 1913 touring cars was inadequate support of the rear seat assembly to the main body frame at the sills. The roadsters didn't have that problem, having no "rear of the body" to sag.