I've been driving my 19 touring around my neighborhood, which is all private dirt roads, for a few days, and it seemed to run fine, so yesterday I decided to make the 6 mile round trip to town for the first time. About half way there, the T exhibited very clear fuel starvation symptoms, and died. I rolled the car back and turned it around, and then coasted to a safe parking spot, and called a tow truck. I assumed that the fuel line or carb had somehow gotten plugged up. While I waited for the tow, I measured the fuel level. It was 3 gallons.
Today, after this ignominious and embarrassing adventure, I drove a modern car to the spot where the T died, and measured the slope of the road using a 4 foot level and a 1 foot ruler. About 15%. Back in the garage, I measured the elevation difference and horizontal separation between 3 gallons of gas and the carb. About 15%!

Three gallons is about the limit for a somewhat steep hill. Your post suggested this when you stated you got the car turned around and coasted to a safe spot. Now if it were me, I would not have been able to resist trying a coasting start. I'm sure that it would have started and you could have then found a gas can with a couple of gallons to get you to town and a gas station.

I am going to jump in here with a suggestion that a lot of forum members are not going to agree with. I have a pressurized fuel tank with just enough pressure to overcome the 3 gallon / 15% grade. Although I have not measured the pressure it is a few inches of water, not very much, and not more than a full tank of fuel. The pressure comes from my exhaust pipe. I have a very small and long copper tube running from the exhaust pipe under the floor boards and up to the tank. The tube is about 1/8 or smaller ID. The fuel tank cap is gasketed and the vent hole sealed. There is no oxygen, or very little, in the exhaust, so the tank is flooded with non-combustable carbon dioxide with a little bit of carbon monoxide. The gasoline vapors do not travel back down the little tube and if any do they won't cause any harm in the exhaust pipe. The tube is long enough that no heat or hot exhaust gas gets in the tank. When I travel up hills, the pressure in the tank is increased due to the increased exhaust pressure. I have run this way for many years with no problems. I have tried electric fuel pumps in the past but they end up failing. This is a much more reliable and simple system. I will let everyone know if I blow myself up.

Neil, I LIKE your idea. I've considered something like a small hand operated air pump, but you'd be constantly pumping!

How do you address filling the tank? Is the tube removable from the cap somehow?

I remember as a kid dad having to turn the T around at the bottom of this hill by the farm and having to back up it. When I asked why, he explained about the gravity fuel feed in the T. The lesson stuck. Top off the tank before the hill. I suck at backing up.

There's a saying that two gallons of gas is plenty and one is not enough. But that's on level ground. This is why I never go anywhere without the gas cans on my running board.

Neil, would you please explain how you route your copper tube and how you attach it to your gas tank? Thanks, Bob

For the Ford gravity fuel supply, if the condition of the sediment bowl filter is un-known, then that can be a cause of fuel starve out on hills.

Had similar occurrence years ago with the '24, ran fine on level, but once climbed a hill and stalled out near the top. Rolled back, and re start, and turned the T around and down.

Back in the garage pulled the sediment bulb and found debris packed into about a third of the screen mesh, that let gas thru for level drive, but on demand of the motor going up hills, fuel flow was constricted.

Cleaned the screen and could run with the pack up the hills.

A new screen soldered in place is best way to have good fuel flow. 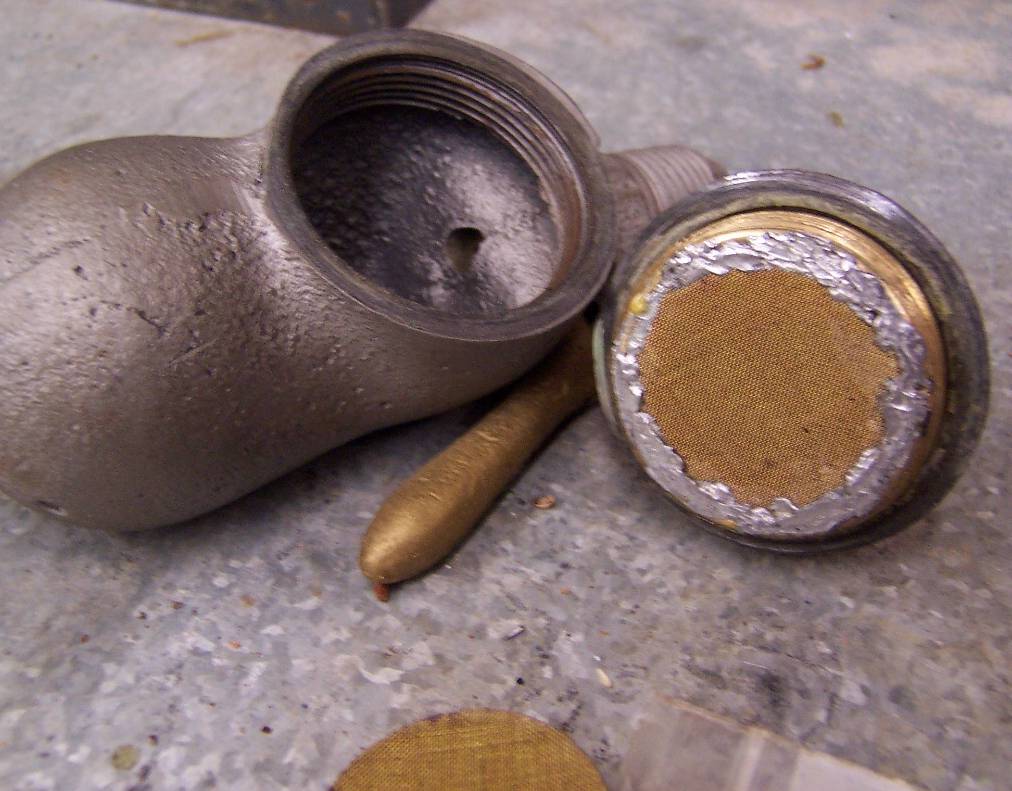 The tube goes into the top of the tank. I just remove the cap like normal.

I use a sharp punch in both the exhaust pipe and the gas tank to make a hole that was deeper than the thickness of the metal. The punch deforms the hole into a sort of steep sided funnel shape. I then threaded the holes. I used a small 1/16 NPT fitting. If you try this trick with a large diameter hole you will tear the metal. If I decide to go back to straight gravity feed I can use a pipe plug to plug the holes. I have used different diameter tubing. The latest is very small. I think I bought it at Lowe's and I think it is used for some part of a thermostat. 1/8 copper tubing works.

The tubing is just coiled up in front of the tank. It is at least 6 feet long but is coiled up. I used a zip tie to secure it.

I will send a photo later tonight or tomorrow morning.

Best explanation yet of fuel starvation - the way you explained it helped visualize the cause & effect.

Before the vacuum tank became common on automobiles, many high end cars used rear mounted fuel tanks pressurized by the exhaust. Fuel tanks in the cowl or under the seat (by about 1911) were considered inconvenient and not proper for a family "of means". Therefore, the gasoline tank had to be located elsewhere, and the rear of the frame was the only sensible place for it. Reliable mechanical fuel pumps were nearly two decades into the future, even mechanical pressurizing of the fuel tank was not reliable enough. Nobody wanted to hand pump all the time, so pressurizing the fuel tank with exhaust pressure seemed the obvious solution. NO moving parts, quiet, and self regulating simplicity (the factor that made mechanical pumping or pressurizing unreliable).
Most high end cars then used a hand pump to pressurize the tank for starting the engine, after which the exhaust pressures took over the task of maintaining pressure. Pressure was usually taken from the head pipe (between a couple feet back of the manifold and the muffler) where pressures are higher, and then run back to the gasoline tank. That pressure is then run through small tubing routed away from the exhaust pipe where it can cool, and then plumbed into the top of the fuel tank. They often also included a vertical loop or two before entering the gasoline tank. This served a couple purposes. One, additional cooling of the feared hot gases. And two, it created a "trap" for any gasoline that might splash in the tank and somehow get pushed back into the pressure line. This was a legitimate concern, as pressures would vary depending upon power and rpm of the motor, and occasionally the tank's pressure would be higher and would blow back a little (even more so when the engine is shut off!). The loops allowed the vapors to condense, and liquids to mostly stay on the low sides of the loops rather than blow back into the hot exhaust pipe (where the small amounts would likely be quite harmless anyway).

About 1914, the Stewart Vacuum Tank became available. A true marvel of engineering and design. It worked so well that efforts to design a fully mechanical pump were not pushed very hard. It took almost fifteen years before improvement in materials made the diaphragm pump a practical alternative.

I have always wanted to use this system on a model T speedster. Maybe the next one I build? (Hopefully I get to build a next one.)

OK, here are the pictures.

I made a mistake earlier. The holes in the tank and exhaust pipe are 1/8 NPT.

You can see where I soldered up the cap boss where it was leaking. The deformed hole is easier to see in the exhaust pipe. The bandage is a repair. 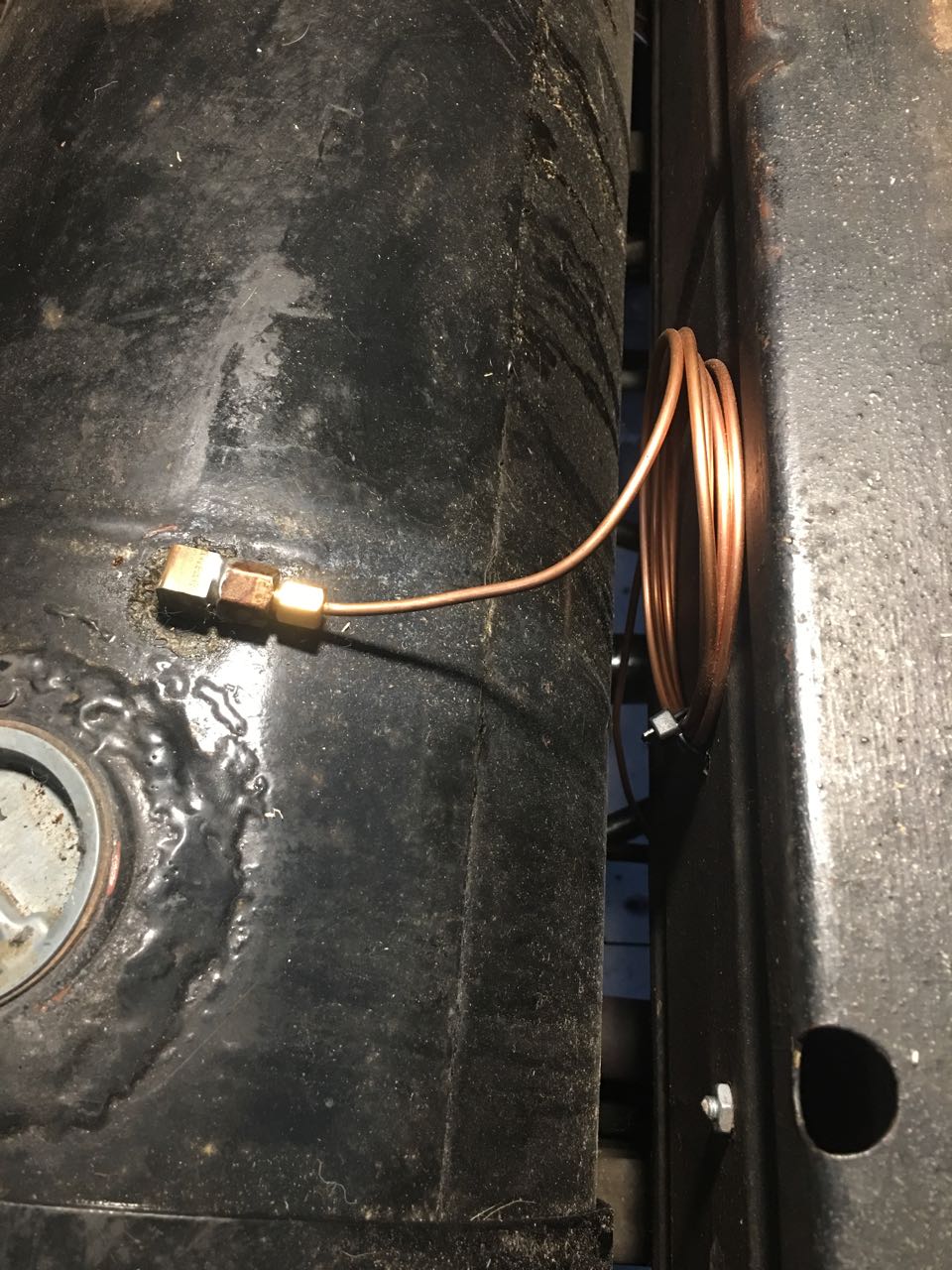 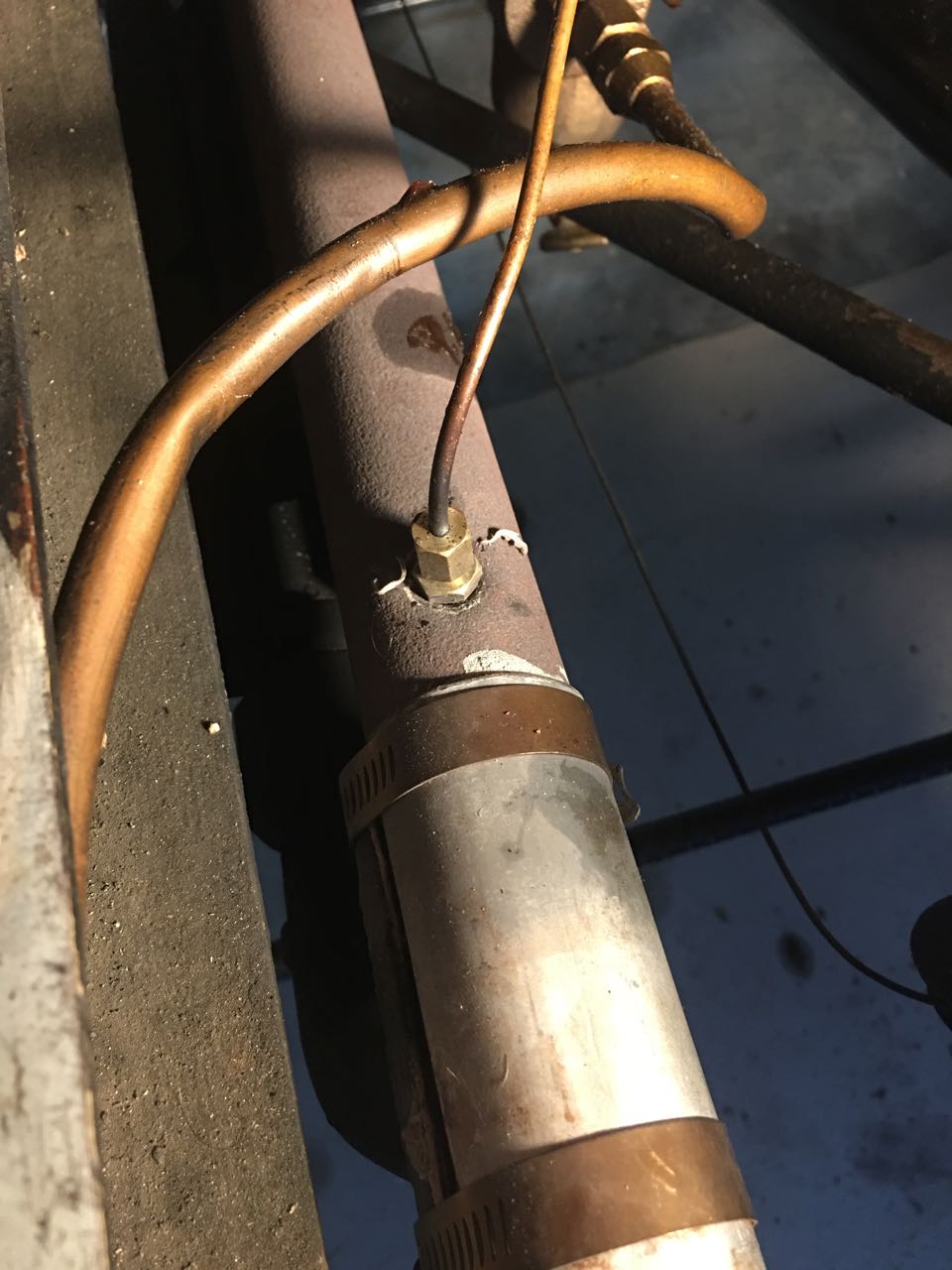 I should add that I am working on the car, putting the Ruckstell back in, and got a little grease on the fuel line and exhaust pipe. That is the red splosh.

Sorry, bandage is where the exhaust whistle mounts.

I saw a neat trick on a tour a couple of years ago. A friend driving a 1913 Buick with a similar gravity flow fuel system had modified his gas cap by drilling out the vent hole and soldering in a small piece of brass tubing. He then used the rubber hose, squeeze bulb and open/closed screw from a common blood pressure cuff to make a device that he could use when necessary to pressurize his fuel tank. For normal operation, the screw was open, providing ventilation to the tank. Going up hill with less than half a tank, he closed the screw and using the squeeze bulb, he just pumped enough air to slightly pressurize the tank and keep the gas flowing. It didn't take much to make it work. He could tuck the whole thing down beside the seat cushion completely out of sight.
Neat trick. Handy when you are out in the country driving around and there is no place to top off the tank.
Terry

That Terry makes a hell of a lot more sense to me that using exhaust gasses.

Yes, but I'd still keep those running board cans.

I witnessed a different approach to the usually suggested reversing up a hill. On a long steep driveway to a property one of our T club members was low on fuel, as he missed the gathering at the start. When his car coughed, he immediately swung side on across the roadway, thus making the car level from front to back. That was enough to get the carb full again, and off he went further up the hill. He did this trick 3 times before getting to the top, but never did the engine cut out.

Not something I would try on a public road though!

Besides the obvious risks, my greatest concerns in using exhaust gasses to pressurize the fuel system is that you are unnecessarily introducing water vapor into the fuel system. Net time you fire up your car on a cool morning see what comes out of the exhaust. Water vapor is a byproduct of combustion. I try to keep moisture out of my fuel system.

FWIW - Back in my day, exhaust gas was used on fuel tanks of military aircraft for the obvious reasons of being shot at, not climbing hills. There was also a system of Dry Ice, stored Nitrogen and etc. I am pretty sure this was done up through the B-36, and may even be done today.

I'm really glad to learn about all of the ways folks have solved this problem: pressurized tank, electric fuel pump, Stewart vacuum can. It seems to me that the easiest, cheapest and most reliable fix is to fill up the tank. Just wish I could count on remembering to do that.

Neil, thank you for the info and pictures. I've known that such a system would work but the first time I've seen just how it's implemented. Bob