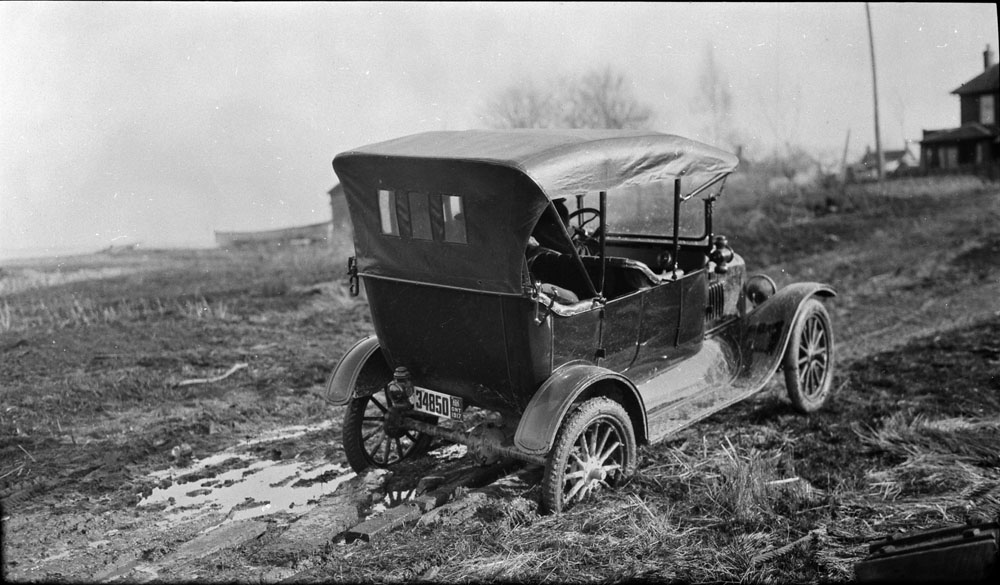 Lots of details in this pic--note you can see just where the top pads are, the straight line of the top fabric edge, the metal trim where the top is fastened to the back and it's fairly wrinkle free, but not completely. Note too, the accessory dash panel with clock (Stewart dash?).
There something in the mud right behind the car, wood pieces maybe? Bottom right looks like maybe a stack of whatever is in the mud? Also, paint is still shiny, car is likely only a few months old.

This car also appears to be a Canadian model. In addition to what David mentioned, I like the correct placement of the rear windows, which is something you don't always see on restored cars.

It does have the Canadian top supports (the RH one has come undone) as Hap mentioned in an earlier posted photograph.
I think the board under the diff was being used as a lever to pry up and hopefully move the car forward.

Having been in mud like that I can be sympathetic. The beam is under the differential center where it will do the most good. They may have waited until they were almost out before taking the picture to document the adventure. ( ONT 1917)
Rich

No footprints around the back of the car or that timber - there are tracks around the passenger door heading toward the house. Maybe they went for a team to pull them out rather than go wading ? Wonderful "story" picture ! (Did the driver pull that far to the right to avoid the timber ?)

Yup,1917 Ontario plate for sure. It amazes me how many Canadian photos wind up here.

I don't see the little 5" long leather patches on the door tops near the inside handles. I thought all Canadian open cars had the protector patches, but obviously not.

Maybe those patches came out later like 1920 which is when the tops with twin oval windows appeared.

There appears to be someone driving, maybe they are making forward progress?