Early fuel lines.......
Were they Brass or Copper?
Cheers,
Rob

Thanks Frank.
All the best,
Rob

Good question, Rob, but it comes with a caution:

Do not use copper tubing for a fuel line.

Reason: There is a certain amount of flexing of a fuel line, since the engine tends to shimmy around a bit. That's part of why a Model T was so hardy -- it could flex.

When copper tubing (or wire) is repeatedly flexed, it "work hardens," and eventually breaks. You don't want this in a fuel line!

As far as I know, brass tubing is rare if available at all.

Use steel tubing. Available everywhere as hydraulic brake lines. It comes in different diameters and lengths, and is nice and cheap.

If the color is a problem for you, get a rattle can of brass paint.

Brass tubing is available from suppliers for both gas lines - gasoline and acetylene.

I didn't know that Ford used brass for fuel lines. Since I have 3 black ear T's they all had Steel tubing for the gas lines.
So the question is when did Ford start using steel lines to replace the brass ones.
Was it after 1916 or earlier or ?
The other early auto's probably used brass also I would think.

Any one have a photo of correct route and size for 26 Runabout / Roadster. After reading this post I'm a believer in the brass.
Throw in another wrench! Let's see photos of everyone's shut offs!
Brian

Ford certainly could have used steel but they chose brass and stuck with it even after brass became more costly than steel during the war. There must have been a reason. 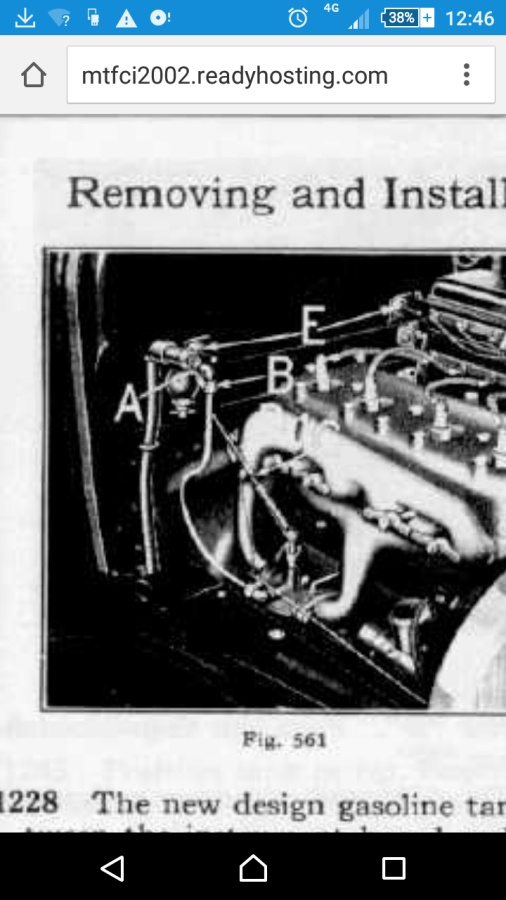 The original NOS lines I've seen are in fact brass, but TIN plated, all the way to 1927.

I have had this discussion with John Regan in the past and he assured me there is nothing in the Ford archives to substantiate this claim.

Bundy Tubing representatives back in the seventies told me they've been working with Ford since the Model T. Years ago, the elder Bob of Bob's Antique had a bundle of pre-bent steel lines and I purchased a couple. They were terne plated steel.

The remaining Bundy website has this note which I repeat here hoping that they won't mind:

The Bundy Corporation was founded as Harry Bundy and Company in Detroit, Michigan, in 1922 by Harry Warren Bundy, a former mechanic with Detroit Steel Products. Established as a manufacturer of steel tubes used in automobile gas lines, Bundy's first contract was to supply tubing for the Ford Model T, which in 1920 accounted for roughly half the cars on the road worldwide. Bundy's innovation was a tube crafted out of a single strip of steel, which was wound around twice to create a double wall capable of withstanding pressure of six thousand pounds per square inch. At first, Bundy simply sold the straight tubes to Ford whose workers then bent the product to conform to the Model T's chassis. During the initial bending process at Ford, however, the soldered seams of Bundy's tubes broke open, rendering them useless, and Bundy was forced to rethink his design or risk losing the contract.

With the help of his toolmakers, Bundy invented bending machines that could shape the tubes without bursting the seams. This early attempt at "adding value" transformed the auto industry supply business, and by 1923 Bundy had sold 3.5 million feet of tube, and Bundy tubes became the industry standard for automotive steel tubing. Within two years, Bundy moved his operations to the second floor of a manufacturing plant on Bellevue Avenue in Detroit and began selling tubing to the emerging refrigeration industry.

When Harry Bundy's health began to fail in 1926, he sold a three-year option to buy the company, whose assets now totaled $143,000, to Wendell Anderson, a 28-year-old graduate of Yale University. In February 1929, Anderson assumed control of the company (renamed Bundy Tubing Company) and its patents and retained Harry Bundy as the company's advisor. Later that year, Bundy's engineers invented the "Bundyweld" tube, a double-walled steel automotive tube that used brazed copper rather than solder to join the tubes' seams. The result was enhanced torsion and bending qualities, increased resistance to corrosion, and improved fatigue strength. Aided by the rapid development of new automotive applications for its tubing--including hydraulic brakes--Bundy's sales took off. "

The fuel line "facts" with regard to changes and materials are pretty solid in the Ford archives. The base metal for all T fuel lines remained as brass. They did begin to allow the use of "seamed and sweated" brass tubing but they very soon required pressure testing of the seamed and sweated type tubing. There is no mention of the Bundy Corp in the archives within the engineering drawings but that is not unusual since the sources for manufactured parts is NOT something that is normally talked about on drawings by any company even today. The engineering drawings for parts specify what is to be made and and sometimes methods as to how. Typically then a company's purchasing department finds a vendor who can meet the specs in the drawing.

I learned some more interesting information thanks to this thread. I admit I just assumed the lines were steel because the fuel line on my 24 Coupe seemed to be rusty or so I thought. I changed it several years ago when I restored the car.
I still have a lot of T parts that I have kept and I intend to go through them to see if I kept the line.
I guess it just goes to show that Model T's weren't all black and fuel lines and other T items aren't exactly as we think they were!!

I personally have not seen any T today that I could point to as original enough to have its original gas line still on it. I attribute that mainly because almost all of us do not use the "felt packing" that Ford used to fasten the fuel line into the "sediment bulb" end and the carburetor end. This felt packing allowed flex of the fuel line at the ends but maybe didn't produce the metal fatigue that causes the metal to snap off at the ends. Sometime after the T the most positive way to seal tubing ends was the ferrule and it crimped into the fuel line and positively prevented the fuel line from leaking at the ends but from that point on the fuel line itself has to absorb the flex and I personally have witnessed more than one of the fuel lines "snapping off" right at the ferrule which is what happens in due course. I heard of a guy that used a piece of neoprene hose in place of the felt packing and that made sense to me and I confess to using a copper line in my DRIVER T for more than 30 years now and it shows no sign of fatigue at any point. I am NOT advocating anything here other than to point out that using a ferrule to bite into the line and thus seal the ends is a sure fire method to eventually have the line SNAP OFF cleanly with gasoline spraying all over the place. Both brass and copper work harden so I don't think it makes much difference as to which will snap off first. The fittings used on a T at the ends were designed for a different packing namely felt and it tends to flex at the ends and not leak probably because there is no fuel pump to put pressure on the seal and a small drip probably was not anything that anybody worried about. Can't say for sure since I wasn't there. I want to make it clear that I only presented in my own research what the archives stated clearly. I have no idea what was being used to replace the line when they broke during the later years except it appears not to have been brass and I never see a T with felt being used as the packing these days. As I stated I have been using a short length of neoprene hose over the ends as a packing and you don't have to tighten the fitting very tight for it not to leak and it has a lot of flexible movement in it as the neoprene allows that.

I use the felt packing on both ends of the fuel line. Always have and I see no reason to change. I sometimes rub a dab of Aviation Fuel Lube into the felt if the tube is within reach. Never a drip and the pack nut is easily removable. Your mileage may vary, Bill

From what I have read, today brass and copper lines and fittings are harder then in the past. Because of EPA regulations, the lead was taking out of the formula, which lead to a harder material. I have see this with todays brass fittings, they don't seem to conform when screwed in and have cracked a couple of inlets on carbs trying to line them up to the fuel line when turned to the last little bit. The old fittings don't seem to have that problem. But I think John is right about using the original felt packing or neoprene. Even on todays roads there is still a lot of chassis flexing.
While you might be able to find fittings that still have lead in them, I do not think most off the shelf have it. After all, they might be used in contact with water that is consumed by people.

The small amount of lead was, and is, mostly a lubricant to make the brass easier to machine. If a person is worried about hardness, it's easy enough to anneal the tubing.