A recently restored growler does not exactly correctly operate or else I do not understand how it should function.

The power cord was still attached and in poor condition, but I plugged it in to see if it was functional.

The normal vibration noise was there, without any smoke.

So I removed the cover, bead blasted and repainted it.

I also carefully removed and replaced all the wiring, one wire set at a time, and made a schematic, as I completed that effort.

I also replaced the two wire power cord with a three wire grounded plug cord and connected the ground to the vibration pieces.

Everything seemed to go well, until it was noted that the one probe was connected directly to the hot power line.

The light would light when the probes were touched together, but there were maximum sparks if the one probe touched the bare case spots.

This is an early growler, without the double pin meter circuit and a separate switch to turn off the probe.

Is it totally worthless?

There is no identification information as to who built it and I can not find a patent with a like unit.

Would anyone know who might have made this unit or when it might have been made or have more information on the hot wire or how it was supposed to be used? 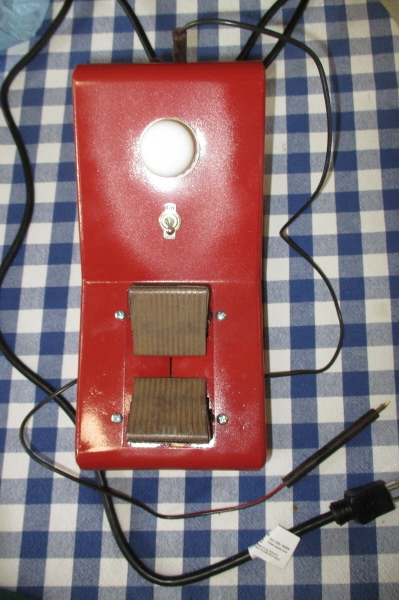 Because the case is grounded, you are effectively shorting out the mains supply by touching the red probe to it. Remember, the mains supply neutral is also grounded at the switchboard. This instrument is dangerous because there is no isolation between the mains supply and the test probes, but is not unusual from a time when no consideration was given to electrical safety. I'd be removing the connections to the probes or run it through an isolating transformer.

If you're still really keen to use in its original form, swap the black and white wires. Then, when the probe is touched to the case it will already be at ground/neutral potential. Still deadly if you get between the probes however.

Swapping the probes were my first thought.

The other probe is already wired to neutral and stored in the back.

The last one of these that I restored had a separate transformer for those two probes that was not grounded on either end or in the middle.

That one seems to work OK.

This one was simpler and safer, but the ratio was still 1:1 to allow 115 volts to the test light.

Old growlers are still a great tool for ONE purpose and that is to detect certain issues in the windings and core. The light bulb and probe is just a very crude continuity tester that is also very dangerous because it uses 120VAC to perform continuity tests. I keep my growler on the shelf to check out armatures but only for the "hacksaw blade" portion of the test. I use a multimeter with a battery operated ohm meter scale for other tests that examine the winding continuity "shorts and opens" kind of issues. Much safer that way. Some growlers and other early AC powered "testers" and battery chargers of various sorts have no isolation transformer in them at all and those are very dangerous to use or even have on your bench since you can short something to them rather easily and thus have a straight path for the AC power from the growler to any piece of equipment that has that third wire GROUND prong on the plug.