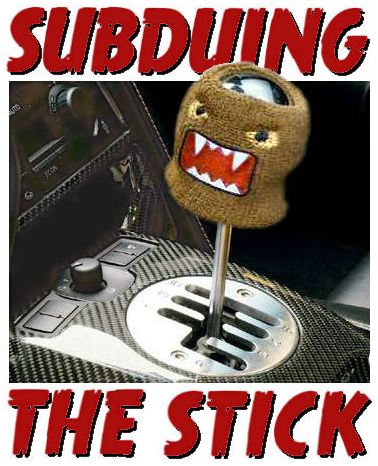 Now, I'm not the oldest of old-car enthusiasts, but I've been around long enough to remember when the ability to lug a car around a corner without having to down-shift was considered a good thing because shifting a non-synchromesh transmission was such a drag. -At the time, having fewer gears was considered a plus because it required less shifting and a car with an engine powerful enough to need only three gears was a good car. -Even after synchromesh became available between the top two gears, three was still considered the ideal number of forward "speeds." (and in that era, most often, the gear-shift lever was on the steering column). -Dad's 1951 Mercury was one of those swell, three-speed cars.

GM's two-speed, automatic "Powerglide" transmission might have been a reflection of a philosophy which felt that the less shifting, the better, for if an automatic transmission was good because it eliminated manual shifting, the fewer times it had to shift itself was even better than that! -Either that or it was just cheaper to build the transmission that way and the manufacturer could get away with it because, back in the day, our locomotive-displacement V-8's had vast quantities of low-end power, and with gasoline going for 28 cents per gallon (accompanied by green stamps, plaid stamps, dishes, cutlery and a guy in a uniform, bow-tie and visored cap, who washed your windows and checked your fluids and tire pressure with a smile as the pump filled your tank), nobody cared that they were getting only seven miles per gallon.

Then, somebody got the idea that the shifter didn't really belong on the steering column after all and somewhere around the mid-sixties, some American cars were coming out of factories with what the ad agencies called "four-on-the-floor" (as if that were something brand new). -The floor-mounted configuration combined with synchronized gears added up to some extra fun, which of course, returning WWII American veterans who had experienced British sports cars already knew. -Heck, shifting got to be so much fun that a few American cars eventually started popping off the assembly line with as many as six forward speeds.

It's surprising that for its paltry 20-horsepower, my Model T Ford has sufficient low-end grunt that, in residential areas, I can drive all the way around the block without having to downshift—at least on level ground. -As it was in the beginning with all Brass-Era horseless carriages, the less shifting the owner had to do, the better, whether you were talking Pierce-Arrow or Ford, and all early car engines had long strokes to deal with that. -But because my Tin Lizzie has only twenty measly horses, many of which don't make it all the way to the rear wheels, when it comes to steep hills, it doesn't matter that my Model T's engine has a stroke as long as a dachshund owner. -With only two forward speeds, the choice boils down to either risking a broken crankshaft by lugging the car up a steep hill in high gear or downshifting for that long incline and wearing the heck out my planetary gears' bushings. -

Well, actually, there is another way of dealing with the problem:
I think, part of the fun of owning and operating one of these very old cars is dealing with the challenge of its severe limitations. -Like an Piper-Cub pilot, I double-check the weather forecast and pre-plan my route around hazards and obstacles that wouldn't even occur to operators of modern machinery. -Thus, I keep my hills shallow enough to climb gracefully and accept the longer trip as part of the deal. -As is always the case with an antique car, it's never near so much about the destination as it is, the journey. -It ain't even in the same zip-code.

As usual, a nice piece of writing Bob. Not sure what it was, but something in your post reminded me of what I believe, was the best lesson I ever learned in regard to gear shifting, why it's necessary, why we do it, and how easy it was to learn "what it's all about" when I was a kid, long before I ever thought about driving a car.

I had a couple of single-speed, coaster brake 26" balloon tire bicycles when I was a kid. One summer, I worked all summer long to save up enough money to buy a brand new Schwinn Tiger, a beautiful bike with a Sturmey-Archer 3-speed shift. I learned real quickly why you would never try to pedal up a hill (especially a long hill) in high gear. (......in fact, I learned this when I still had the single-speed balloon tire bike, the first time I rode my friends new English Racer type bike that had the Sturmey-Archer 3-speed, which is why I wanted the new Schwinn Tiger "middle-weight") with that same 3-speed rear hub.)

Anyway, I finally got the new 3-speed Schwinn Tiger, and I loved it! Of course I didn't realize it then, but in retrospect, I probably learned more about "gear reduction", how it works, and what it's for, and why we "shift gears", with that 3-speed bike, than any other thing I ever learned about "power transmission", just from the break on my tired legs that resulted when I shifted the ol' Sturmy-Archer down to the lower gear ratios to pedal up hills!

You and I had pretty much the same experience. - As a kid, I couldn't comprehend the reason why a car needed to be shifted. -Oh, I understood about shifting by ear and getting the car to make the rhythmic rise and fall sound with the clutch and gear-shift, but what was the point of that? -Dad, an aerospace machinist, never came up with a reason simple enough for a little kid to grasp.

Then, same as you, one day I found myself to be the proud, prepubescent owner of a new bike with an English, 3-speed, Sturmey-Archer hub. -Suddenly, it all made sense as the limited power of my widow wegs taught the whole lesson in very simple terms.

My English 3 speed was stuck permanently in high! Must have had good legs because I put a lot of miles on that bike and most of it was not on flat ground