I am wondering if your spouse drives you T? Last weekend on a camping trip the topic came up of what would happen I couldn't drive my car for whatever reason could my wife drive me or the car home? My wife drove the car once 20 years ago but isn't interested in driving (she would rather nap and site see). Just curious. Thanks, Dennis

No, I drive hers.

I'm with Hal. My wife owns the T. She received it as an inheritance.
I have the pleasure of working on it and driving it.
She navigates, shops and plans the trips.

Mine wants to learn but I'm afraid to teach her, she might like it and want to use it more than she already uses my 1970 pickup.

I have had my wife drive mine. Starting is another issue. She can drive it but would rather not. I think the words death trap came up. I grww up with no power steering and marginal brakes. She doesnt mind riding tho.

My Wife drives ours and has been doing it for over 50 years, however I drive them almost all of the time. She also claims she was driving a farm tractor at age 4, hauling hay from the field to the barn with a John Deere, so maybe this isn't such a big leap for her.

Mine has driven several times. She does well but would rather ride. She is afraid she will break them and often things have happened when she has driven them but were not her fault.
We owe these ladies a lot for just putting up with the cars and we T nuts. 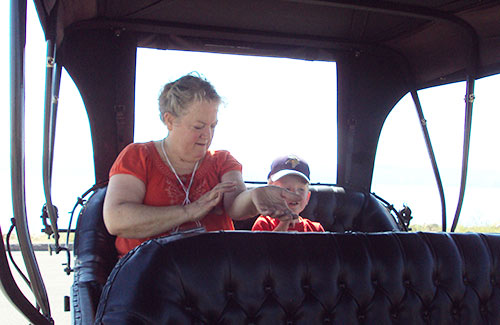 Here in the San Francisco /San Jose area we have seen several ladies driving model T Fords.
A few ladies from the Washington state area have been in our annual Speedster Endurance run over time, as well as our own local ladies.
Actually quite a few times. Many also had a women passenger/navigator on the speedster run.
There have been ladies driving on three day tours that stayed behind the wheel for the entire tour. Even some that owned their T and had no partner to share the car with.
One local club member was badly injured and his wife drove their touring car and speedster in several events, both alone and sometimes with him riding along.
When we farmed in Wisconsin My mother hauled cattle to the South Saint Paul stockyards by herself in a TT that had no starter. It was about forty miles each way. Although it had a Ruxtell for the hills it took the entire day to make the trip.

A few years ago I worked for a couple that had many antique cars.
Their favorite for model T events was a 1915 touring.
As they got older they had me convert it to a starter car so that if anything happened to him on a tour she could start it and drive it.
Such emergency never happened and they have both gone on to the tour in the sky.

A few women drive their own Ts. Model T Times editor Natalie Peiffer has a beautiful brass T she brings to HCCA tours. Nancy Wall drives hers on many HCCA tours. So does Kathie Conrad, who learned to drive hers after her husband died; she also served a term as an HCCA national director.

On some HCCA tours, there has been a ladies' driving school in a parking lot one afternoon. It's usually, but not always, taught by one or more of the distaff T owners. Three years ago I gave lessons to the granddaughter of an HCCA director at one of these events. She did so well that, the next day, she went in my T and I navigated. She drove over 90 miles on Massachusetts roads on the second day she'd ever driven a T. It can be done!

We don't have one (yet), but when we took the T driver's ed course at the Gilmore she was a better T driver than I. ;)

My wife does not like to drive! So NO way is she going to learn to drive it. She has driven our pickup maybe 5 times in 11 years. The everyday car she avoids like the plague, but will drive it.

My son on the other hand, every chance I give him, he will drive it. Unfortunately, he is not of legal age yet! My brother also wants to learn to drive it, but that is a WHOLE nother story.

No, because I don't have one

My wife drives the Ts once on a while. She prefers to ride; doesn’t enjoy the pedal dance too much. She drives our ‘08 Maxwell more often than the Ts, usually a leg or two on each tour we attend. I can’t blame her. I actually find the Maxwell easier to drive too.

My wife? No way. I have offered to teach her many times and she always says no.

I wish she would, but she is afraid to even try. She used to drive a Model A as a daily driver and I keep telling her the T is even easier to drive. You don't need to "grind it until you find it" with the gears. But she won't even try. She won't even drive our pickup which I use to tow the T. I think she would drive the pickup in an emergency. She used to drive a Ford pickup many years ago, but not now. However she usually goes along when we tour. One way to get her to participate is if I participate with her in things she likes to do even if it bores me. In fact I think that's one of the reasons our marriage has lasted over 60 years.
Norm

I'm lucky if she even rides in it. Ugh. Bill

My wife Rosalie likes to drive in the fast lane.
Here is a video of her driving one of my racers.
It may take a few seconds to upload.
Harry
https://www.youtube.com/watch?v=MHcbfcC6ClU&feature=youtu.be

For 18 years iv tried to get my wife behind the wheel. I’m still trying but my hope is running a little low.

My wife has trouble remembering how to use the dang lawn mower and she uses it often.
She remembers the kids' and grand-kids' birthdays and other things so it's a wash.
Bless her heart.
I ain't never gonna ask her IF she wants to drive a model T. Yikes.
When we go someplace with our moderns? I have her drive usually. She drives a lot with her job. Still scary but I like to look at the scenery!

Very interesting thread! You guys have inspired me to push my wife to try it! She has always driven automatics. She has always been reluctant to try it. She is very good to me and has allowed me to acquire some nice antiques, with wheels and without. She is the love of my life and I can’t imagine life without her! She has been living with cancer for the last 6 years so, I don’t want to waste anymore years. I will beg her to go with me to the local high school on the weekend. I will give her the choice of our cars but, I think the Ford will be the easiest. I’ll be with her so, I guess that’s all that matters! Thanks guys for helping this along! I will let you know how it goes....

The San Diego club use to tun a “Learn to Drive” tour in a quiet industrial area on a saturday. During those lessons “most” of the wives learnt to drive a T, including Heather. She preferred not to drive and quite enjoyed navigating and watching the scenery pass by.
There was a funny encounter during one of the Alaska tours when most of the drivers took a plane ride up Mt Denari, leaving just a couple of wives at the hotel. Well there was an earthquake and while she was watching the lites swing around she was thinking “how do I get 12 Model Ts out of here?” Of course we were flying at the time and had no knowledge of the earthquake.

Never asked for rides after the first one never asked to drive & I never offered so I guess we're even.

No, but she wants to learn how to drive our 1927 Touring this Summer. She already enjoys T rides so I'm hoping she doesn't enjoy driving more

Some years ago on an HCCA tour we held girls driving lessons. This was in Port Angles out on the San Juan Straights.

After lunch the men had to don their ladies hats, and let the women drive. Candy my wife, hopped in our 1909 50 hp Stoddard Dayton, and off we went I was going to give her some pointes but, no need. Around and round the pier she went.

Oh yes we were actually driving on a pier out over the harbor no guard rails, one false move or mistake and we would have been in the salt water.

Candy, can drive every car in our eclectic collection from our 1907 2 cylinder Reo up through the newest cars. Her fav's are the loud and fast ones, her Shelby Cobra and my Ferrari. We figure just in case there is an emergency, she can drive them all.

She did once about 20 years ago and not since.

Mine doesn't LIKE to, but knows how. She will occasionally pull one in or out of the shop, if needed, but doesn't like to drive on the road. She owns her own 1918 Touring, but much prefers for me to do the driving. She's a little more open to driving the A and will drive it to a car show when I'm driving one of the T's.

My wife refuses to drive my T's, she says if she does that means she approves of them. Oh well, my 12yr old likes to drive them.

My spouse dives her own 1923 Model T Runabout. 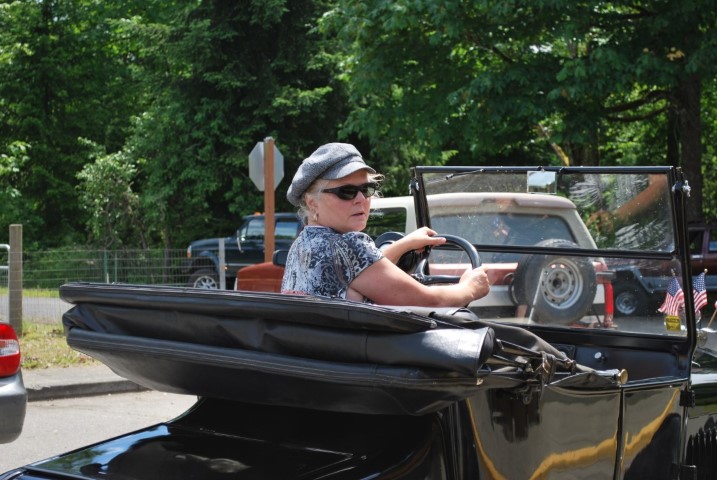 Mine drove the 27 speedster and the 27 roadster. She didn't like the bitsa 22 rpu. She is adventurous and will try anything. She was pretty good at it too. We did live rural in the SC midlands so traffic was light with plenty of clay roads. 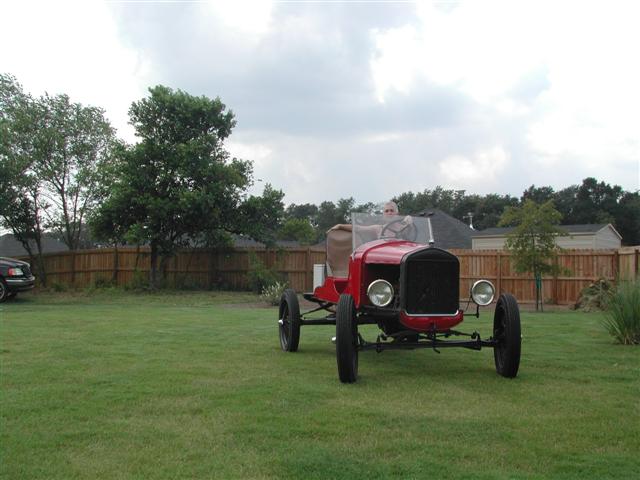 But when my dad finished up their Model A coupe, she loved it. She just jumped in and drove it without reservation. Whenever they participated in local parades, Mom would drive the A and Dad would drive the T.

Of course Mom did learn to drive on a Graham Paige; about a 1931, I believe.

When my Dad's parents married in 1936, Grandma didn't drive. Grandad insisted she learn, but being a newlywed, didn't want to teach her himself. So he would drive her to a nearby gravel pit, hand her the keys, climb up and sit on the edge of the pit, and light a cigar, while Grandma down below figured the car out on her own. When the cigar was finished, the lesson was over; Grandad climbed back down and off they drove. It must have worked; Grandma drove the rest of her life and never had an accident.