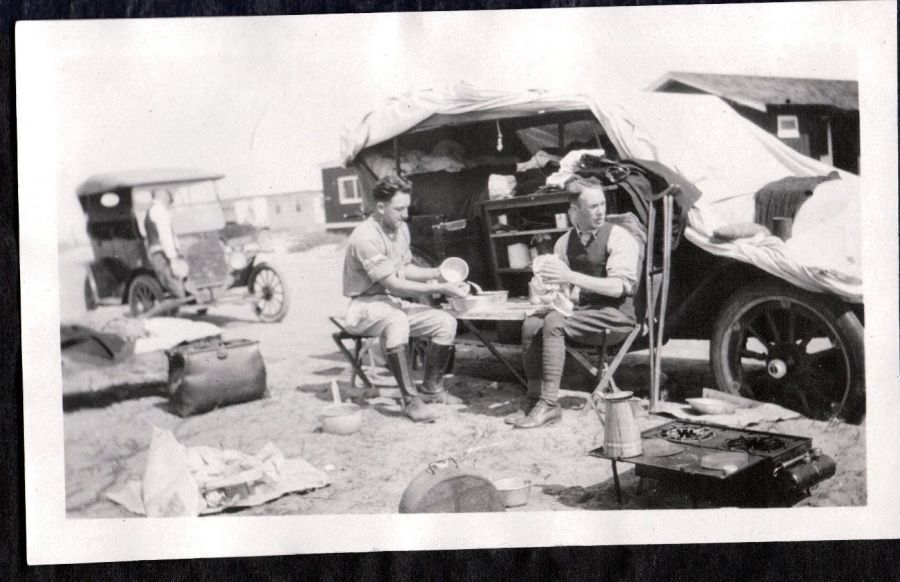 There are so many aspects of this picture I like.

The one guy has crouches.

I would love to see more of that camp stove.

It looks like they have a bed made, that is above the seat backs.

The canvas, looks like it is draped over the top just to keep the mosquitos out. does LA even have mosquitos?

Now days, people just set up camp on the sidewalks.

My grand parents made several camping trips to California and Washington state from Nebraska in the early 1920's in their Model T. But I don't think they had a Prentiss-Wabers Auto KampKook Kit, Model 2 with them. I think that is the stove in the picture. Check out the Classic Camp Stoves website or visit: https://classiccampstoves.com/threads/prentiss-wabers-2.17419/

Oh.... and yes there are mosquitos in So. California - but nothing compared to the B-29 Minnesota mosquitos.

Thanks for the info. That might be why I never noticed mosquitoes in CA, as I am use to the high intensity Minnesota version.

Our mosquitoes down South are mistaken for turkeys by tourists.....

Love to see how the guys are wearing the lower half of their WW1 Army uniforms.

It looks like home construction in a new neighborhood. Several vacant lots, a few very new looking houses. Many people would do that in those days. It was a big step in a major new direction for society. Buy a subdivision lot, and camp on it while they built the house. They look pretty well set up for a few weeks stay.
I wonder about the fellow with the crutches. Did he get hurt working on the house? Or maybe a lingering injury from the great war?
A wonderful photo showing a slice of life "in the day".

The car behind the 2 man. What kind of wheels are those with 6 lugs?

not much to go on,but buy the hub cap it is not an overland. charley

Firestone wheels were very common for the model T and still are.
They had six lug bolts.