I have two carbs with Viton tipped float valves and both stick closed badly. Is anyone else having this problem? If so what do you do about it?

Maybe start by cleaning your carbs and fuel lines. It would be more likely that type would not seal rather then stick. Could also be that the eye the pin passes thru is worn allowing the float to jamb the valve because it cocks the valve in the hole. Could even be the flow of fuel in is too low to push the valve open or fuel level in tank is too low.

Many report viton float valves stick, others get good results. Same with grose valves. Replace the needle and seat with a metal set. Dress the needle face on a fine stone until it's "perfect" (many new parts are too rough to work really well) and tap the needle into the seat wit a rap from a small hammer before assembling the float.

Rich, no one has the all metal float valves. Called every one the day and no one has any more.

Probably gas additives affecting the Viton. That would be why some do, and some don't; your local station has (or doesn't have) the bad stuff.

If you have a shut off at the carb, turn it off and run the carb dry.

You posted: Is anyone else having this problem? If so what do you do about it?

One way to minimize, if you keep those Viton tip needles is to add an at- the- carb shut-off valve, for ease of closing off the gas.

Then when parked for a time period, close the valve and drain the float bowl completely. Leave the T parked with no gas above and below the needle and seat.

Getting rid of the today's gasoline with all the additives and driers used will prevent sticking of the plastic needle tip to the brass seat.

My experience, left the gas too long in the carb bowl while T was garaged. Had the carb shut off but didn't drain the bowl 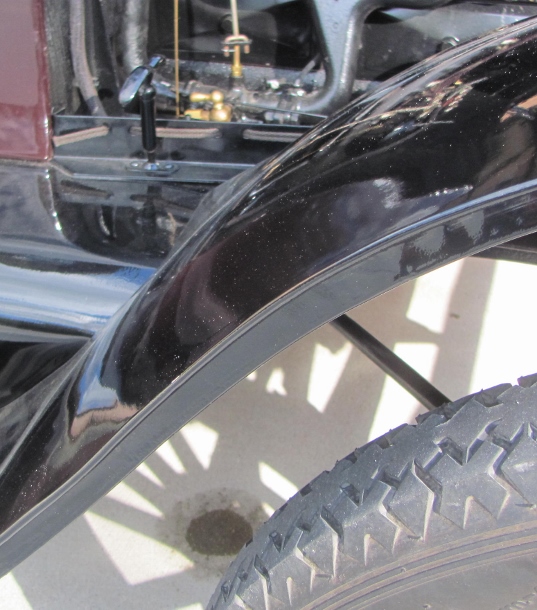 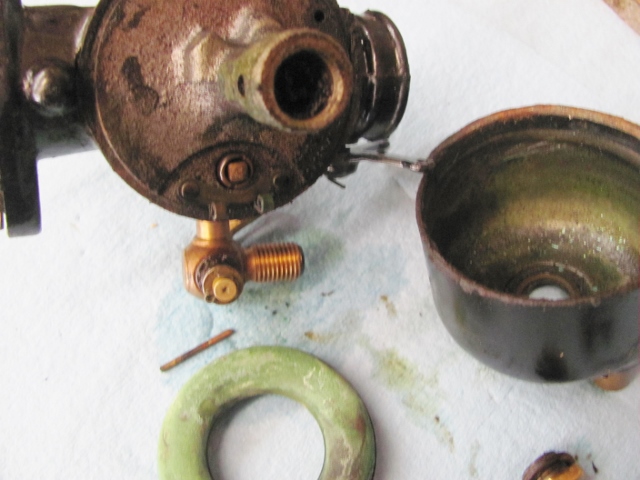 Removed carb, and bowl, and Viton needle was frosted with stuff so it could not seat fully. 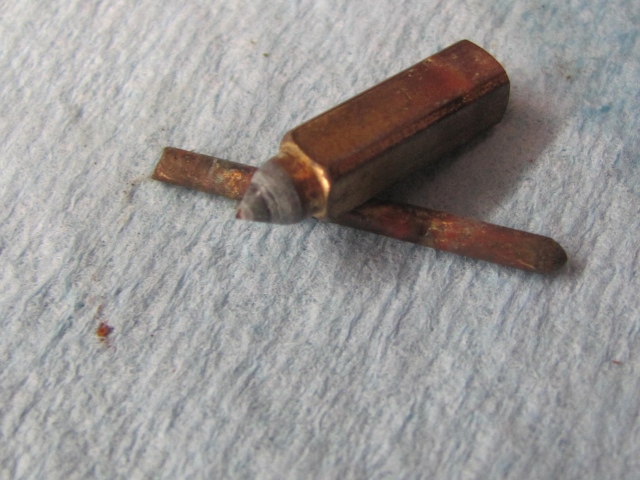 Note the 'ring around the collar', the white stuff was dried up gasoline additives that were captured between the Viton tip and the seat, while the bowl was full and the float pushed up on the needle, during storage with gas in the bowl. When the gas level dropped after starting the T, the needle just would not seat again and the carb runneth over!

So don't let gas sit in the bowl for long periods if you have a Viton needle.

I don't let the gas sit in the bowl for more than a few hours if I'm not driving the car. I shut off the fuel valve and run as much gas out of the bowl as I can before the engine kills. If it sits more than a week, I ope the bowl drain as well to get the rest of it out. Just remember to close it afterwards!

I add a little Bel Ray MC1 two cycle oil to my gas occasionally. If I am going to park it for a long time, I put 5 to 6 oz in the tank, mix it first with gas before pouring in the tank as it will settle to the bottom if it is poured in with out mixing. a 50/50 mix is enough. It will keep gas from going bad for up to 5 years and will even help sour gas. There are some who will tell you that additives are no replacement for good maintenance, and if you are in that camp, then drain your tank and carburetor every time you park it. I have not drained my carb since I put the new gas tank in a few years ago. It sometimes sets for months with out running in the winter and my spring start up procedure is to turn on the ignition and pull the crank.

I had the same problem, and simply switched to using original needles. Problem solved.

If metal needles are no longer available, seems this would be an opportunity for those who make parts ?

I'm toying with doing a run of original style NH valves and seats. They would be ground to a proper seat, so they wouldn't leak, right out of the box. Price would be fairly close to what they're going for now. But it would take a chunk of change for the 3,000 I'd have to do.

RV, there is a market out there, but I don't know how long it will take to sell 1,500 (assuming that would cover your costs) let alone 3K.

Larry Smith was making original NH valves. He sold the last to Lang's and they are gone now. R.V., I hope you make them. If everyone knows it may be a one run deal, they might buy a few extra to have on hand. I know I would.

Over the years many different replacement needles have been made. Some are OK, and many are not. I agree it would be nice to have correctly made ones readily available again.

Yep, me too. There's a new needle/seat set in a toolbox here from a few years ago. Tried to see if it was good or not once.
Wasn't carrying a magnifying glass at the moment and the camera wouldn't do it.
A few new good sets would be a blessing for many, many years in my little world. All of my junk still have original sets in the carbs.
:-)

Here re a few of the many versions you may find. I believe the third one is a correct original or a faithful reproduction. 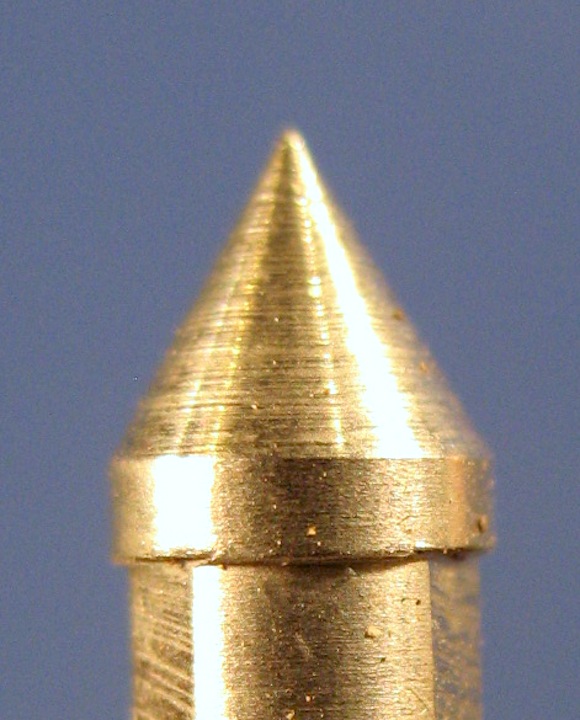 Sometimes a new one is too rough to seat well. 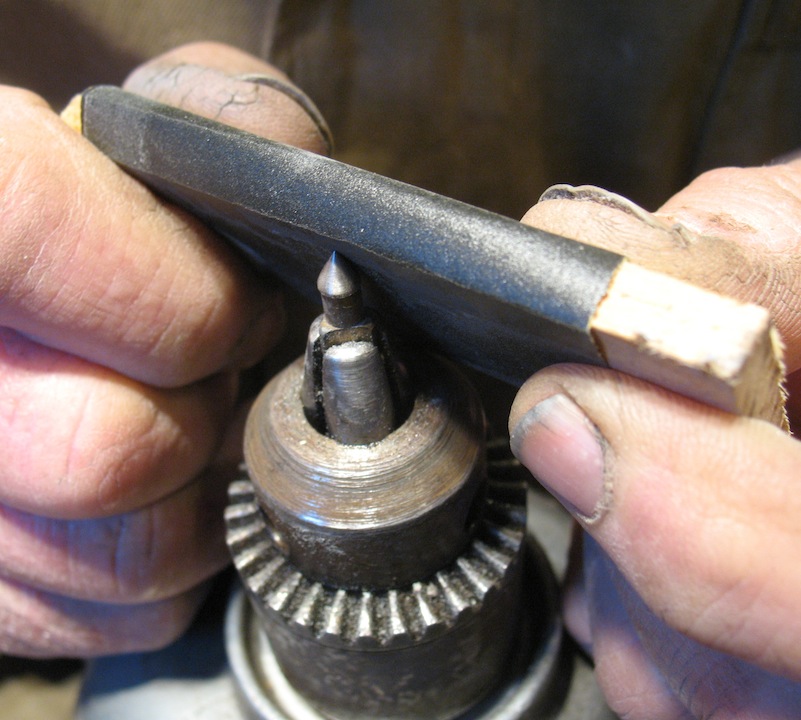 You have to turn it against fine sandpaper or emery cloth to make it smooth enough to work properly.