In searching thru some old boxes I came across the attached photo. It shows our family's first car with my grandparents (in the back) and my father (born 1906) in the front right seat. I believe the Ford is a 1917 or '18 as the family left Michigan in the fall of 1918 and traveled by train to Manitoba, Canada where they farmed for several years. I wish the photo showed the whole car but my guess is maybe a 1917. Am I correct that there were a few years starting in '17 that the touring cars were virtually identical? 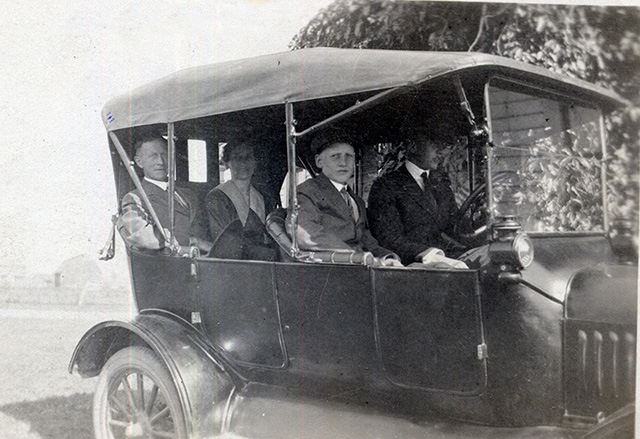 I would say it is a 1917 Ford based on the oval top sockets - I can definitely see the leather pin strap on the second socket.

The top sockets were changed to rectangular early in the 1918 model year so there is the possibility that the car is an early 1918 model (assembled August/Sept of 1917).

Not an early '17 either. The windshield hinges are offset. The early '17s had hinges even with the split in upper and lower glass. The windshield frame is also clearly bolted to the mounting brackets. Both those changes were made about the same time in mid '17. Coupled with the top sockets (mentioned by Erik J), would make it a latter half '17 into early (or possibly mid year) '18.
The rear wheel also appears to be a round felloe. That change is much less clear about the time frame. Certainly, round felloed wheels are correct for probably all 1917 Ford cars. Square felloes showed up by late 1919, and probably somewhat earlier. Past discussions on the various wheels used by Ford for non-demountable wheels have never been conclusive.
Nice photo, and nice car, and looks like a nice family. Thank you for sharing it.

Gee whiz but you guys are good! I see the details now that you've pointed them out. That certainly places the car into a time frame that fits with what I know of family history. Thanks for your help!