Is there a secret to replacing the fuel tank on a 1913 Model T Touring short of lifting the body from the frame. She is ready to go except the leaking tank. I sure hate to ruin the upholstery or scratch the paint. Thanks Bob

I got the tanks out of my '10 and my '14 without lifting the body and I would assume the '13 is the same. It takes a bit of maneuvering but was relatively easy to do.

I replaced the tank in my 11 touring a few weeks ago, no issues. Remove the panel behind the tank, remove mounting bolts from frame and lift out.

Phillip, my panel seems to be wider than the body wood and not removable. Val,my tank is just big enough that it will not clear the front seat frame. I probably need an inch more width to get it up through the space. Did you guys take out an original tank? Thank you both for quick replies.

13 is all buy itself the tank was on the frame when the body was installed over the top of the tank.body was changed in 14 to let the tank come out the top. charley

That seems go be the case. Not good news though. Thanks

Too bad but you can do.it without damaging anything if you are careful. This is what we had to do to get the gas tank out of my Chalmers. No damage fortunately. 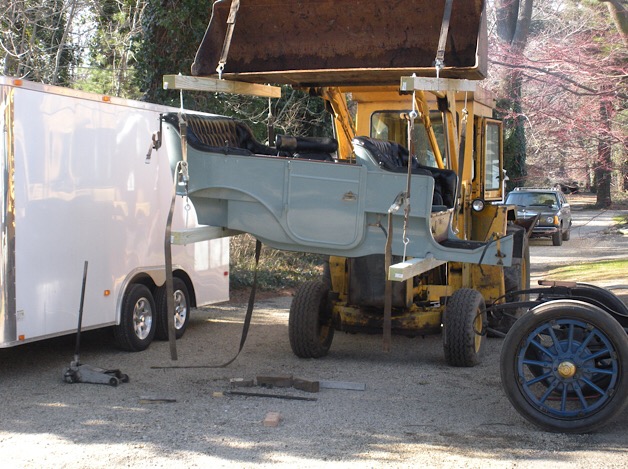 The body has to come up. I'm getting ready to do the same thing on my '13 touring. Don't try it any other way.

Nobody else has mentioned this little detail. Bodies at that time were made by several (four at least) outside suppliers. They were also made by each supplier in batches over a short time. Therefore, bodies varied in detail and dimension by supplier and batch runs. What works on some, doesn't quite work with others.
With some effort (and bruised ribs along with a lot of cussing), it should be possible to unbolt and remove the mounting brackets while the tank is inside the seat frame. Unbolt all bolts involved, lift tank slightly, and slide bracket off the end. I did that once, and no, it wasn't easy. But it may help if just that small amount is needed to clear.
Also, make notes of which way the brackets are mounted before you remove the tank. While the front to back is supposed to be reversible on the two bolt mount, it doesn't always work out that way. And the one hole bracket does have a slight offset. (And don't ask me how they go? I always have to go to great pains to figure out which way works.)

Well believe it or not, we did manage to replace the tank without removing the body. (Small miracle). We simply drilled a 3/8 half hole in the wood that the seat support (or the tank cover) rests on. These holes were drilled at the exact point where the lip at the ends of the tank would pull through. That let the tank pull up through the space with some pretty good tugs. The new one was just a bit smaller around and fell right in place. By the way, Chaffins Garage got a tank to us in two weeks while other sources told us several months

Great to hear!
Thanks for the update.

That's fine if you want to ruin your seat platform. I have my body ready to lift this coming week. I can't mess up that nice original wood. What would have been better, is for Ford to have done his homework before they built the cars!
I have a '13 roadster, with a Fisher body, and the tank will come out through the top.

If the new tanks are slightly smaller the next guy faced with the same issue can just crush the old tank enough to get it out and drop the new one in without touching the seat platform.

I pulled up the body yesterday using the top irons. I didn't have it totally centered, and that caused some problems, but I did it. It's going to the local radiator shop today for a good cleaning, and to re-solder the flange for the sediment bulb.