Can any one please tell me what year this wood kit is? 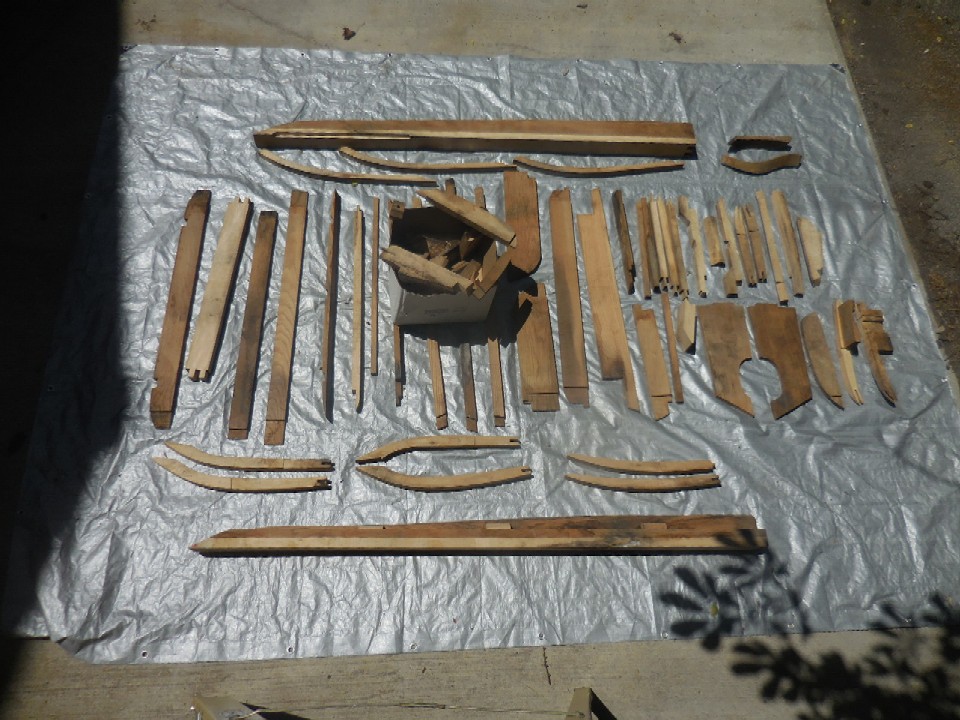 I can tell you it is for a touring car.

I can tell you it is for a touring car that uses wood seat risers. Probably low cowl, 1915-1921. Are there arm rest pieces?

You might add a little more information. Such as it came with the 19xx I purchased? Or I got it at a swap meet years ago etc. Also helpful if you know it is for a Model T or if it is not known what it went to?

Also is there any chance it is for a Canadian car? The rear seat box appears to have the wooden supports that were used in the USA on some 1915-1916 cars and again on some 1918-1919 car that had the wooden seat frames. But the Canadian cars had the rear wooden seat frames much longer than the USA cars. How many door frames does it have? 3 would be most likely USA (although English cars also had 3 doors on the tourings for a while).

And do you know if it is for a single body or possibly parts from several bodies?

I believe it's missing the main frame rails.

I found the wood kit at an estate auction. There was 1 large box with all the wood shown except the 2 long pieces. There was no other information about the wood kit found. There were many early T parts like axles transmissions and a truck load of small parts. There were no sheet metal parts to give a clue of the year. There is a 1915 frame that I purchased at the same time so Charlies guess might be correct. From what I purchased I believe it to be early Ford Model T, but don't know the exact year. It is for sale and am open to offers.

Charlie makes a good point. On my Canadian 15 the main body rails were fabricated with two long pieces each side, and these were assembled with spacers between them, so there needs to be 4 long pieces.

There appear to be timbers for only 3 doors, so the kit may be for a US body, and I am not familiar with how their main rails were configured

i don't know much about these, i have only done about 300 of them, but if i can help just ask. charley

Charley, Thank you for sharing your Knowledge.

I believe that Kahler was the only body manufacturer in 1915 that used wooden seat risers.

You may be basing that off of the information in Bruce's Encyclopedia at: http://www.mtfca.com/encyclo/A-B.htm that says:

Two different lids covered the fuel tank in the runabout and touring bodies; one of wood and the other of steel. The wood covers were used on bodies manufactured by Wilson, and Kahler. These were used on the touring bodies only. The metal covers were used on bodies made by Beaudett, Fisher, Kelsey, and Ford, and was used on touring and runabouts.
Dimensions were 35-7/8 x 16-1/2” (The wood lid was 3/8” thick.) The hole for the gas cap was 4” diameter, located (center) 6-3/8” from the front of the lid. The wood board was made of slats nailed together with two 1-1/4 x 34” strips, 1-1/4 from the front edge and 1-3/4” from the rear, centered between the ends of the boards. Twenty-two #15 x 1” box nails were used to attach the strips. There were two one-inch holes located 3-1/2” from the rear edge and 9-1/2” either side of the center line of the cover. A third hole, 1-1/4” diameter was located 1/8’ from the front edge on the center line of the cover. (From blueprints of this assembly.)

My experience with looking at original cars, is the wooden gas tank lid was used on cars with the wooden seat frames. If someone knows of an exception to that for a USA produced car, please let us know.

But -- we have "fossil evidence" that the 1915 Beaudett (also spelled Beaudette and referred to as Pontiac in most Ford USA documents) bodies had wooden seat frames and wooden gas tank covers. And there may have been others body makes also. But I've spent too much time trying to resize the photos! Oh well -- where did that drop down menu go? 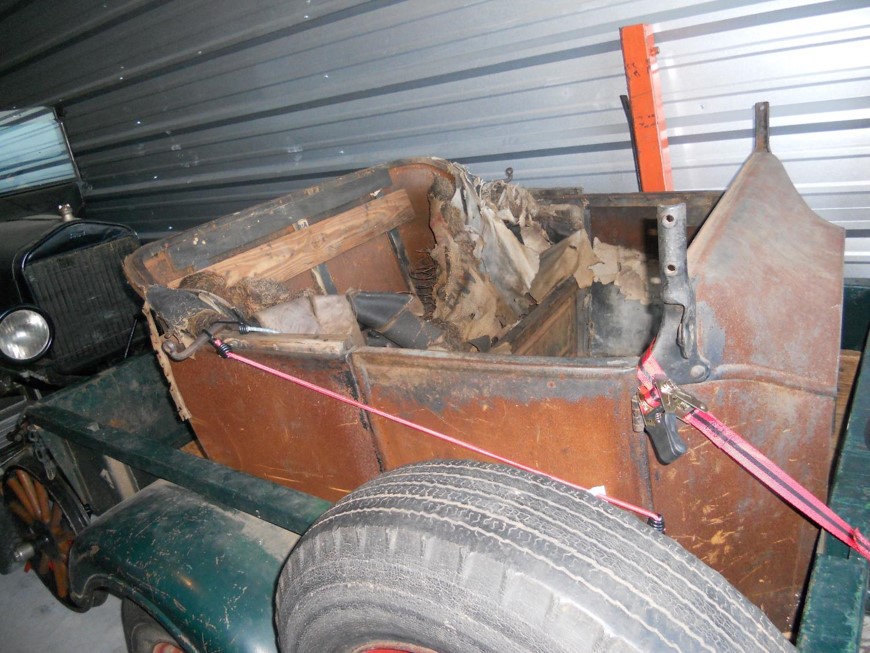 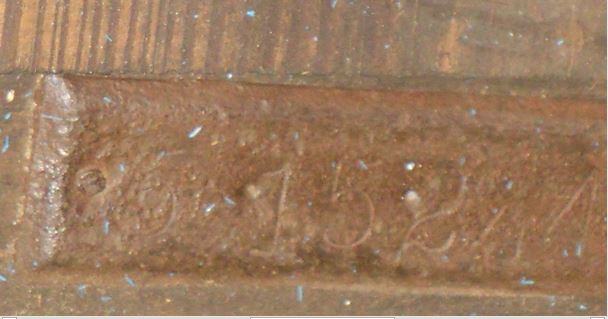 And yes the windshield brackets are the late 1917 - 1922 and you can tell they do not match the rust on the rest of the body. I saw the body for several years while it was still an original car (yes a cut off). The owner restored the car with a new open express body and used the original windshield and brackets. 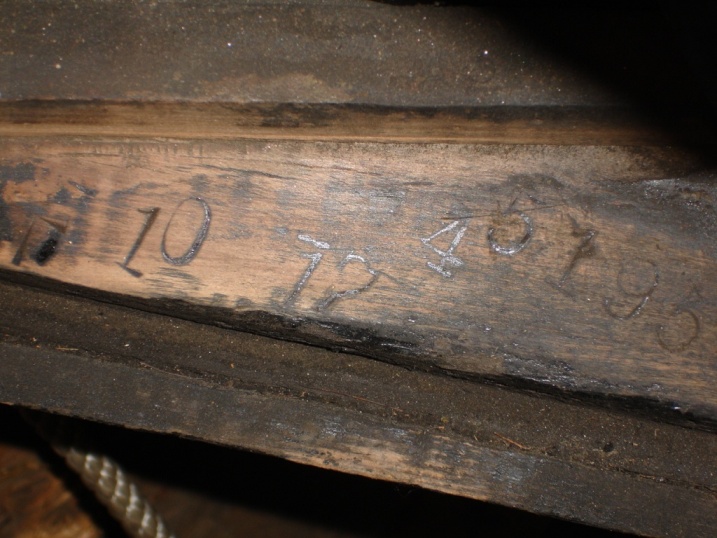 And the gas tank cover is wood: 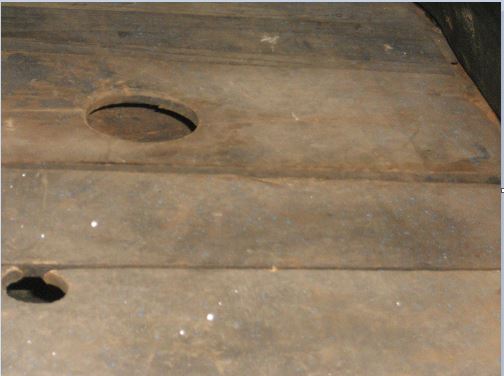 And the seat frames are wood.

Below are the 1923 Body Parts Price List of Parts that clearly references the wood seat frames etc. used in the 1918-1919 time frame.

Note how the parts run 1915-17 and 20-21 and then other parts are 1918-19. Note -- that does NOT mean all USA 1915 - 1917 were steel seat frames -- again we know many 1915 Beaudett tourings were wood and possibly other makes especially early on. And we know that some 1918-1919 USA tourings had metal seat frames. For example our May 1918 Beaudett bodied touring has the steel seat frames during the time the price list of parts had wooden listed.

So much more to still learn.

From page 237 -- note the metal chanels on the rear of the front seat - typical for a steel seat frame car from 1915ish. 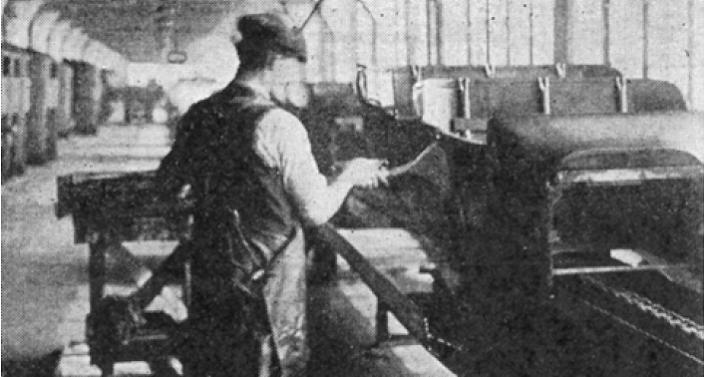 And from page 238 we see what I believe is a wooden seat frame touring. 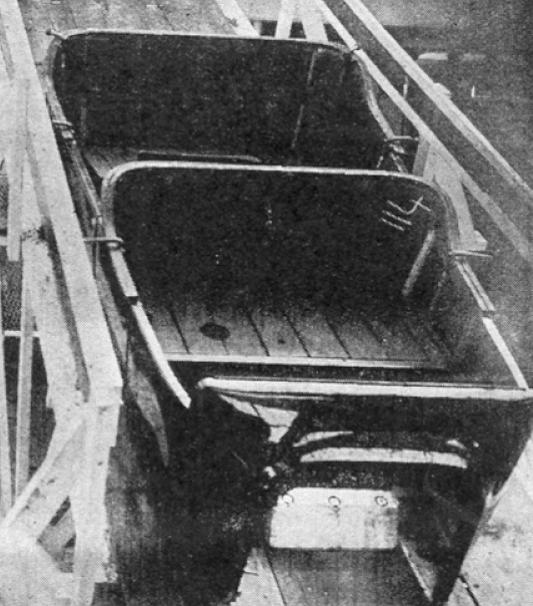 I have never heard of these different body mfg. Would be interesting for someone to do a dissertation on each one.

Thanks for the reminder.

But are there some other easy to spot differences?

Below is a photo Leon Parker posted of his wood seat framed 1915 Beaudett body that he was rewooding. (Thank you Leon!) 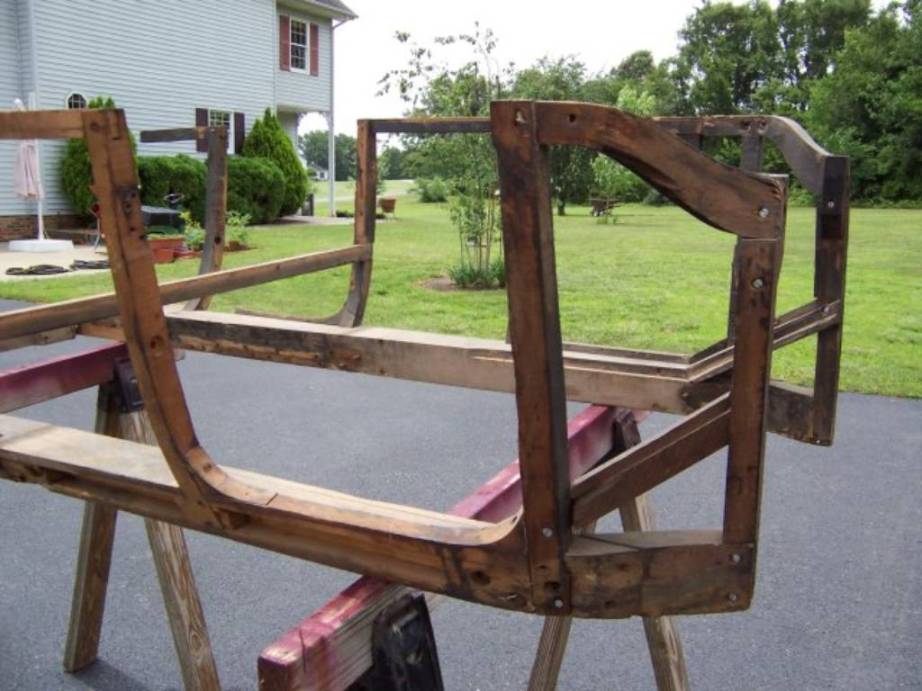 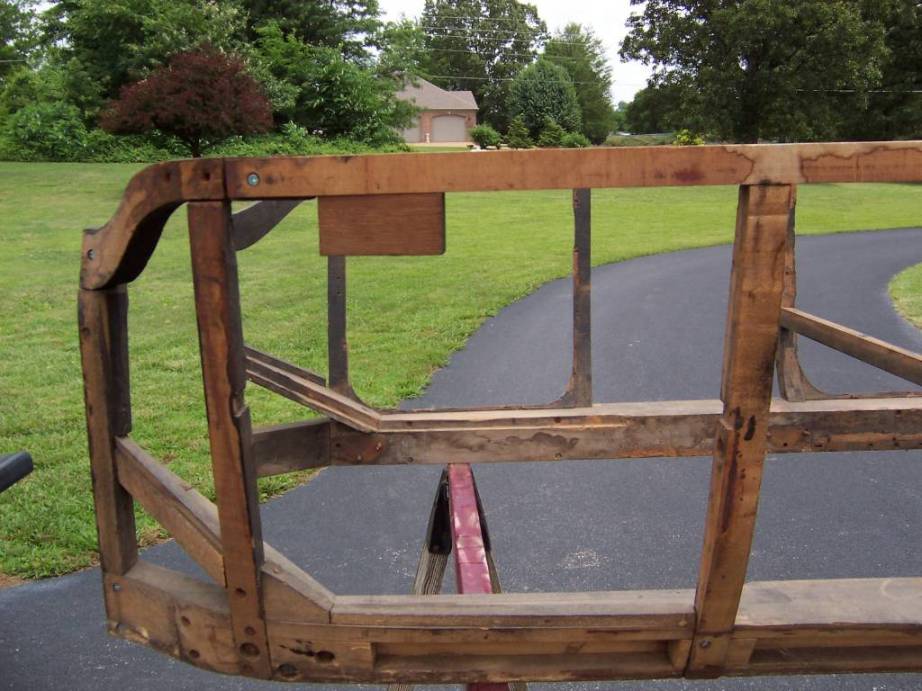 But that part of the wood frame where the arm rest will eventually be located, I believe the top of the wood will be covered with the body tin as shown in the photo below of my May 1915 cut off also a wood seat framed Beaudett body. 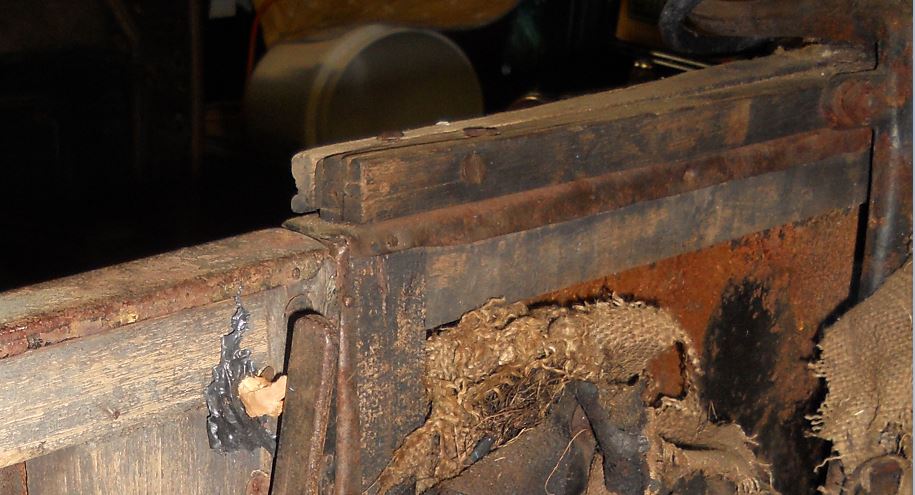 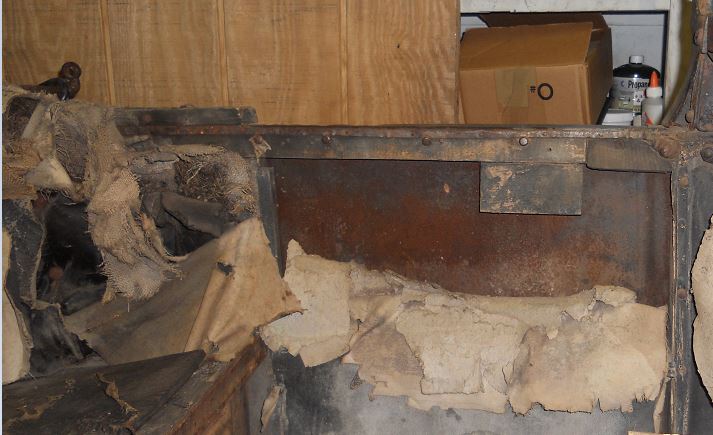 And my theory (guess) is that the type of arm rest wood is determined by the year and the type of sheet metal that the body used.

Below is a photo Erik Johnson posted of his very original 1917 Roadster/Runaobut (thank you Erik). 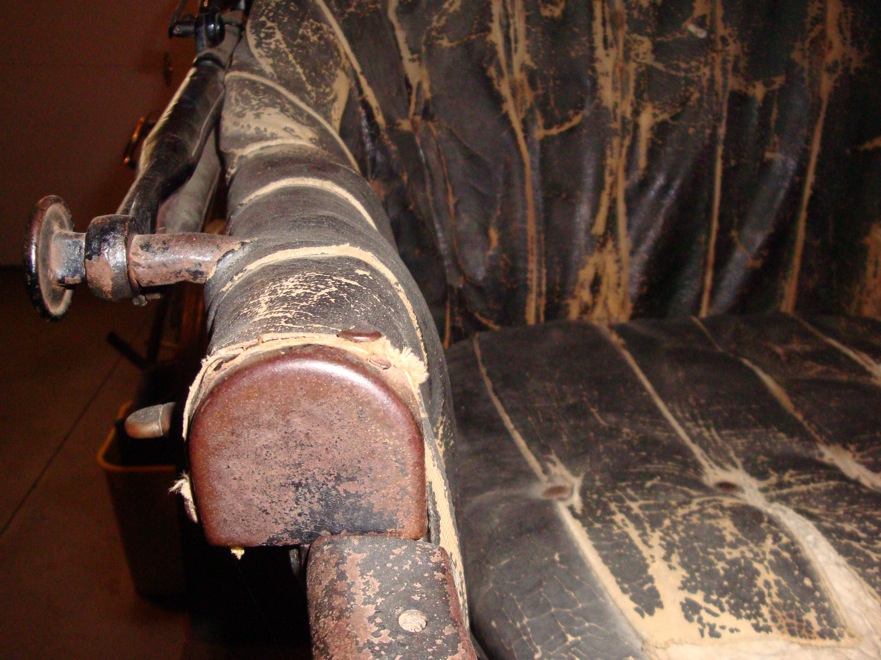 Below is a poor quality photo of the right rear arm rest from our May 1918 Beaudett metal seat framed touring: (Steve -- I appoligize... I know -- with a digital camera I can retake the photos. But in this case my wife has the camera, the car is 3 miles away at a storage shed, and this was the best photo I could find at the moment showing that curved wood 1917-1920 arm rest had.) 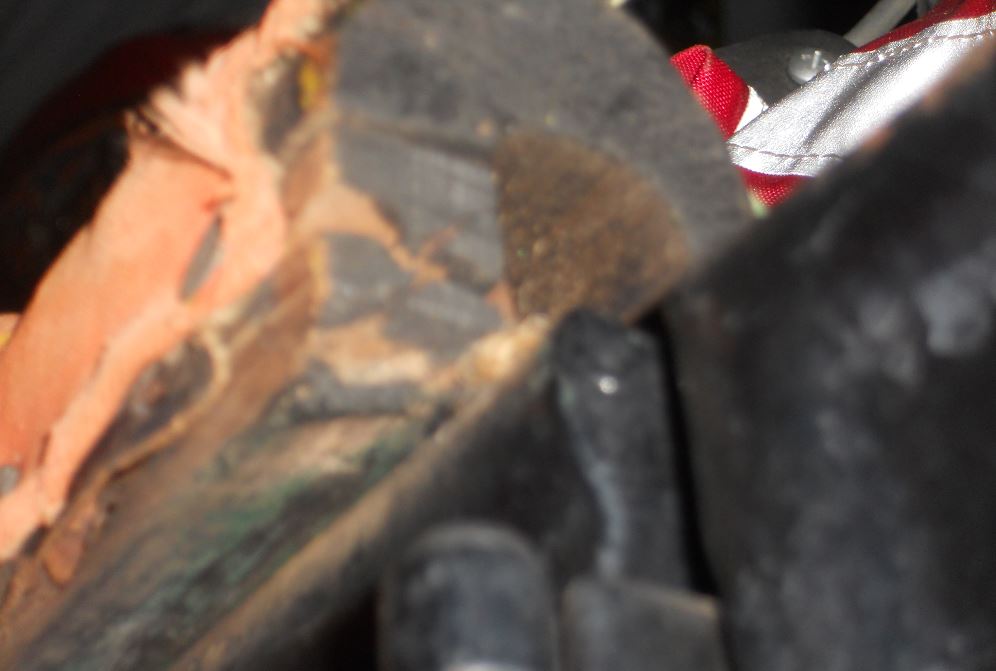 Below is a photo of the arm rest wood on the May 1915 Beaudett cut off body that I have been posting: 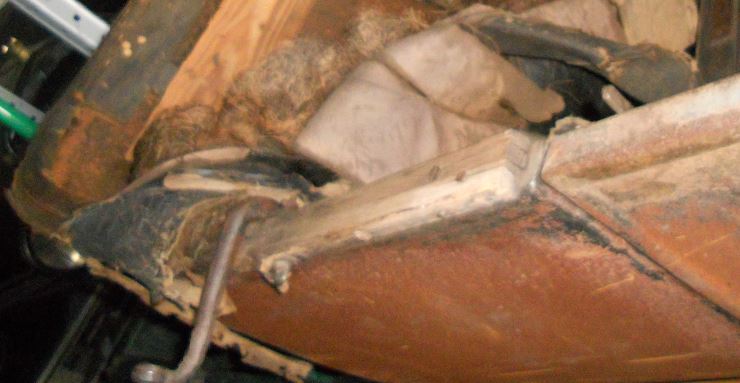 So my thought is would a 1915 wood seat frame rewooding kit also fit a 1918-1919 except for the arm rest tops? And of course for any of those wood kits they have to be fitted to the individual body.

Again thank you Charley and anyone else who can add some clarity to my rambling.

I am hoping to do an article someday about the different body makers Ford used. My target is the roadster and touring bodies 1913 - 1924. I also will thankfully accept information on any year and body style (ok - yes Fords -- 1903-1931) -- but I believe the 1913-1924 open cars study will help me identify which body maker made the body on our 1915 cut off (see my profile photo). But I need to get a better understanding of the differences and more data on the bodies before I attempt and article.

In the mean time I welcome any inputs or if someone else is writing an article, I will gladly share the little I have already gathered together.

For a glimpse of the different body makers please see the Forum posting “Home for the Holidays” at: http://www.mtfca.com/discus/messages/29/40322.html And yes, if you have a body number or letter etc. I would appreciate you sending it my way. If you click on my name -- it brings up my profile and my e-mail address is the 3rd line down. If you put Model T in the subject line it gets read much sooner...)

Again thanks to everyone for helping us gather additional information and photos on the cars.