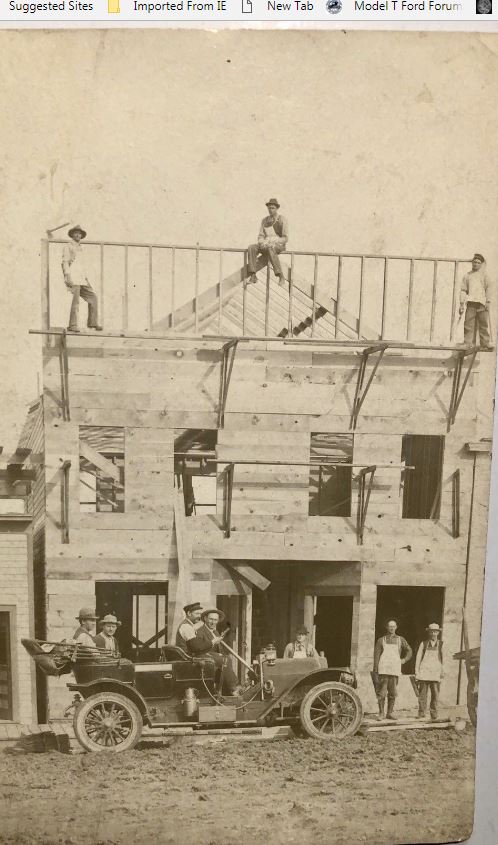 If you build it, they will come.

That guy on the top middle ain't right.

How did they put the siding on between the buildings?

Thank you for posting this! I've looked on the internet for several years, trying to find out how the false front was fastened to the roof......and there it is! Pretty simple really, but that's the first photographic proof I've seen.

Art,
In all probability they built the foundation, the sub-floor, then each of the two walls that are only inches from the adjoining structure. The walls were probably built one at a time laying flat on the floor, then tilted up into place.

Anyhow, that's how I'd have done it.

Henry....back then "balloon" framing was the way to build. One piece wall studs from first floor to roof plate, then a 1 x 10 (or similar) inletted where the second floor was desired. That 1 x 10 supported the ends of the second story floor joists.

Sounds a little shaky today, but most of San Francisco was built that way. It's fast and remarkably STILL LEGAL, provided you place fire stopping between floors.

My point is, it would take a pretty good sized crew to push those tall, stud walls into place!

You're probably right George. I'm fascinated by how simple the tools used then were. Constructing a similar building today, workers would have all manner of power tools and high tech to help them. These guys were pretty much saw, hammer, square and pencil guys.

Looks like a duplex with two angled doors in front. Each side wouldn't be very big,maybe a mercantile and small café? Lawyers office and gun shop?