"When we let the Park Service know we had made it out alive at the end of the trip, I asked the ranger about the car. She said the car is a mystery, but they believe it may be the broken down wreck of a bootlegger. One of the rangers found the identification number from the engine block and sent it to the Henry Ford Museum back east, who is apparently researching it to try to determine the history of the car, and maybe who it belonged to." 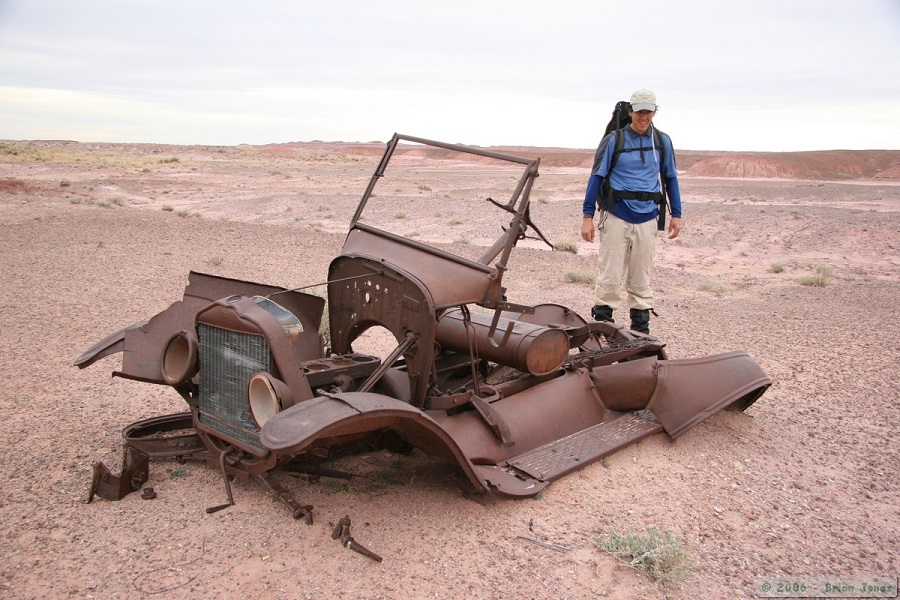 That would be an easy restoration...

That would be fun to see if a person could get some wheels/tires, a head and intake/with carburetor, a few hoses and belts and a can of gas and water and drive it out of there

Where its located it may not even be stuck.... Oh well the feds would not allow it anyway ....

It's a mystery less because of what's there, but mostly because of what's missing !! I'd guess it's been picked for parts, probably back when the trail it traveled to get there was still in use ? Gone with the wind ?

The mice got to the interior!

There really are some good parts there, and yes, some of us have brought worse back to life. It's kind of a shame that it has to sit there and become nothing but iron oxide; its not part of any natural history of the place, and obviously not a piece of known human history either. So why not lift it out of there, perhaps preserve it in a headquarters museum for the desert--or even restore what's left to function??
Well, the first answer to my question is "Federal Regulations: and the second answer is "Money."

That one will probably be around longer than some of the ones in our garages.

In the early 50's you could find a lot of this stuff in the California desert. A lot of it was good and became the starting point for hot rods. The desert is a lot kinder to the steel than the east coast high humidity and constant rain. Free for the picking.

I’d have had a hard time not bringing a piece of it home to put on mine. That crank may come off without too much fuss.