Having never seen one of these (and greatly surprised they even exist), Allan Bennett told me about them, sent me some pictures of it fitted up and also apart. So, I thought I'd add it to my Model T Wheels section and this is a really strange one, at least to me.

The Loose Lug is a Kelsey wheel with a bridge lug that sits inside the steel felloe, this bridge lug is 6 inches from the valve stem (or 1 spoke to the right of the stem) and rests upon the lug bolt to help fit up the other loose lugs and their nuts onto the lug bolts.

As I understand it, you rotate the wheel to where the stem hole is in the 12 o:clock position, then put the rim over the felloe (with the bridge lug inside) and use it to help guide the stem through the hole and then to also help place the other three loose lugs onto their slots on both the felloe and the rim and install the nuts. The nut looks a bit like the same one used on the TT, but it is actually the same thread size and wrench size as the US tapered lug nut.

Larry Blair informed me that he'd also run into a few of these and the mounting set up although strange to us, is really quite durable, even though it looks like it wouldn't be. 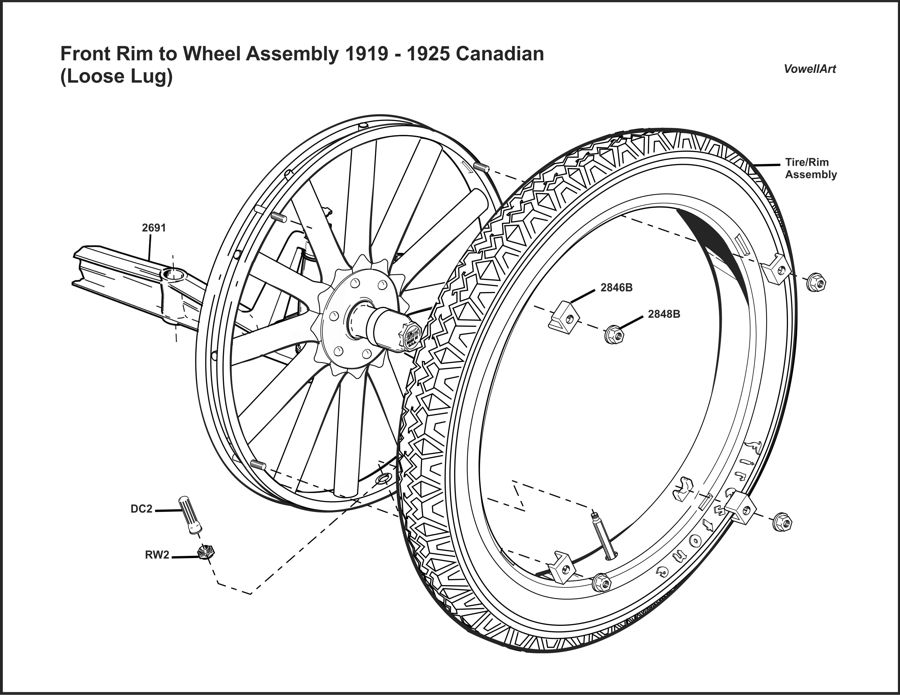 They are not just used in Canada. I have seen them on many US cars, one was the unrestored 23 Slat windshield car I got out of Neb years ago. I also took 5 NOS rims out of the Ford Dealer I found in TN that closed in 1928. There is another type of lug used with them that has the nut made into. I think the Kelsey rim # is an 88. Dan

Dan, I have only ever found Kelsey wheels on our Canadian sourced cars. The rim is a #88, and some of the U shaped lugs have the #88 stamped on them. There are quite a few different markings on the lugs, including some plain ones.

The rim in Martin's drawing has a rolled in ridge, into which is punched a land to take the long foot on the lug. This allows water to get into the rim, and these punched types are often rusted out. A better one, also a #88, has a solid ridge around the rim and the lugs engage directly on that ridge. These are a much better design, and are easier to repair if worn by the lug.

Dan, do the US cars have the spokes with the different taper at the hub? Our Canadian wheels are different. Each spoke is tapered from inside to outside against the hub flange and plate. They are fitted alternately, and as the 6 wheel bolts are tensioned, the tapers pull tightly together to make a firm fit. This also makes it much easier to dismantle and rebuild a wheel, as no spoke press is required. I didn't bother Martin with this detail, as it would be most difficult to show it anyway in a drawing.

Ok, since there seems to be no differences between US and Canadian Kelsey wheels, I've changed this drawing to Kelsey wheels and make no mention of it being Canadian or not, since it was also found here in the US in sufficient quantities as to make it not exclusively Canadian. 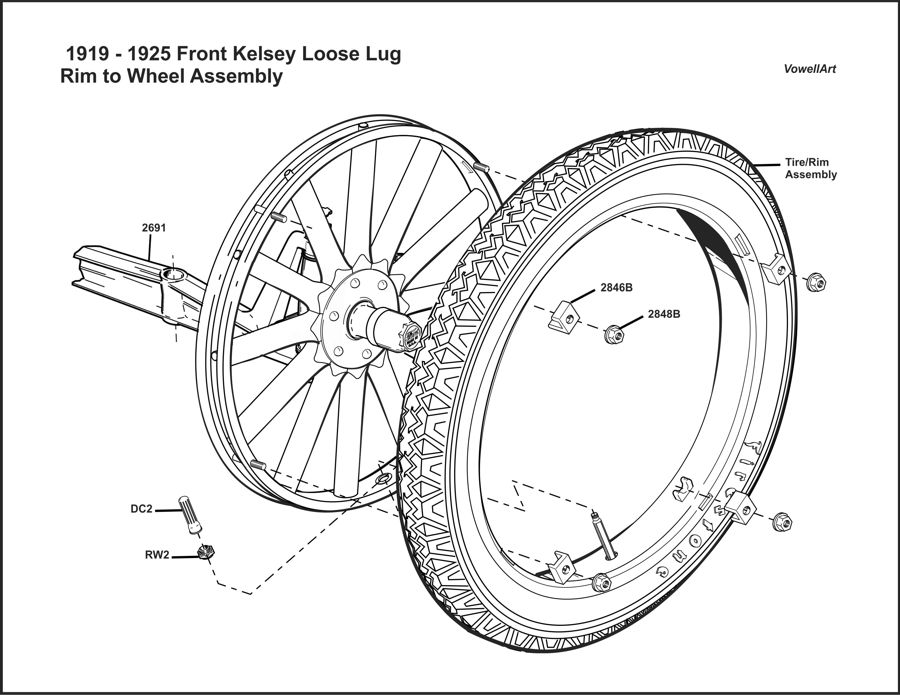 My suspicion is that the Australian spokes system is also going to be non specific to Australia, but I'll have to wait and see on that one...Allan I hope you can give me some examples of spokes from cars out there so I can make an update to this one, or make a new on altogether.

Here is a photo of the spokes Allan is talking about.

I do not know about the spoke thing. I have sold the car that had those wheels on them and I think I have respoked all the others I have. There is a Ford Service Bulletin about wheels and rims that show the Kelsey wheel we are talking about. It has been posted many times on this forum when wheels are talked about. There are also pics on here about Kelsey rims. I am sure someone will post it again. I have also in the past brought NOS Kelsey wheels at swap meets here. Dan

Martin, from Peter's post above, you can see that the spoke above the two at each side shows a wider face on top, and the other two consequently are narrower.

On your beaut drawing only two junction lines show between adjacent spokes, between spokes at 9, 10 and 11 O'clock. If you made the face on the spoke at 10 O'clock a little narrower than the ones either side, that would show the different method of manufacture. On the rest of the spokes, the little peaked flat surface at the hub plate would be alternately a little wider, but it would be splitting hairs visually.

Martin, I am not sure that American made Kelsey wheels were made with the double taper at the spoke root. It may be that it is a Canadian thing. Others may be able to tell you if putting the US and Canadian production on the same drawing would be an accurate assumption.

I admire your tenacity to get things just right, even when it makes things difficult.

Peter, are they reversed dovetailed? Two narrow in front wider in back where it fits to the hub, the one between them is just the reverse of those two...so no matter where you remove a spoke on the felloe, there will always be two on either side of the one being replaced that are the reverse of it...right? This would make whichever spoke you were installing act like a wedge pon the other two, tightening them.

Who makes spokes like that today? All I've seen are the ones that we press in.

Right Martynn, all the spokes are the same, each alternate one is placed inn the felloe and laying with the widest side down on the hub flange ( the ones on each end in the photo) the ones placed next to those would be sitting up (same as the center one) So six up six down.

This allows you to put all the spokes into the felloe and onto the hub. You can then place the outside plate on hub and press the plate down till the spokes are all flat, you then only have to bolt the wheel together. No need for fancy wheel presses and having to start with a high pyramid, you start off similar to the photo above,

As you press the spokes being tapered they tighten so the spokes at the hub end up tight really pressed together.

If the spokes are loose it's easy to place packing around and between the spokes to get a tight fit.

Why no one makes them this way now for everyone is a mystery as the anyone can easily fit them.

Martynn, that method of construction also makes it easy to swap hubs without a press or dramas. Simply remove the outside plate and tap the narrow face on alternate spokes out a bit, then do the same on the other six and repeat until the spokes are worked off the hub. fitting a new hub is just the reverse.

Vern Jensen at Aotearoa Wooden wheels in Fielding, New Zealand makes new wheels like this. He has done 4 sets for me to date, using hickory he imports from the USA.

Just a footnote. The spokes all start off the same, but once the wheel is built, Vern then machines the chamfer to clear the radius on the hub. Then the spokes have to be fitted alternately to maintain the chamfer. When he sends them back, the hole in the centre is bored to suit the hub, the chamfer is cut and the two faces which go to the hub flange and the plate are machined true to the bore.

He has the process well and truly sorted.

Can he make them for individual assembly? Folks here are kind of a do-it-yourself lot (hence the press drawing). Now if he could make spokes like that, sent as a set, I'm pretty sure he'd have a fairly interested market here in the US...I told Jim Lang about this style of spoke this morning and first thing he asked was "who makes em"? Which to my mind means he's interested (having had some problems with their 3rd party spoke vendor).


Not sure it would feasible and or economic to drop ship from Australia to the US, but it may be worth looking into all the same.

Knowing Vern's operation, I suspect he would not be in a position to make and supply loose spokes. When I was taken on a guided tour of his operation by a relative of his, he was a one man band, with stuff going all round the world, for all sorts of cars.

I was fascinated by his method of bending the felloes for the wooden felloe wheels he builds. Simple but very effective. When I asked him if he was comfortable showing me all his operation, he stood back, took a considered look at me and said,
"It's taken me 20 years of practice to be able to do this. You don't look like you have that long to go". Cheeky Bugger!