Royce Peterson brought this one to my attention...it is basically the same size as a Ford Standard wheel (meaning it's not Kelsey or Hayes) but none of the parts are interchangeable between them and the Ford Standards. 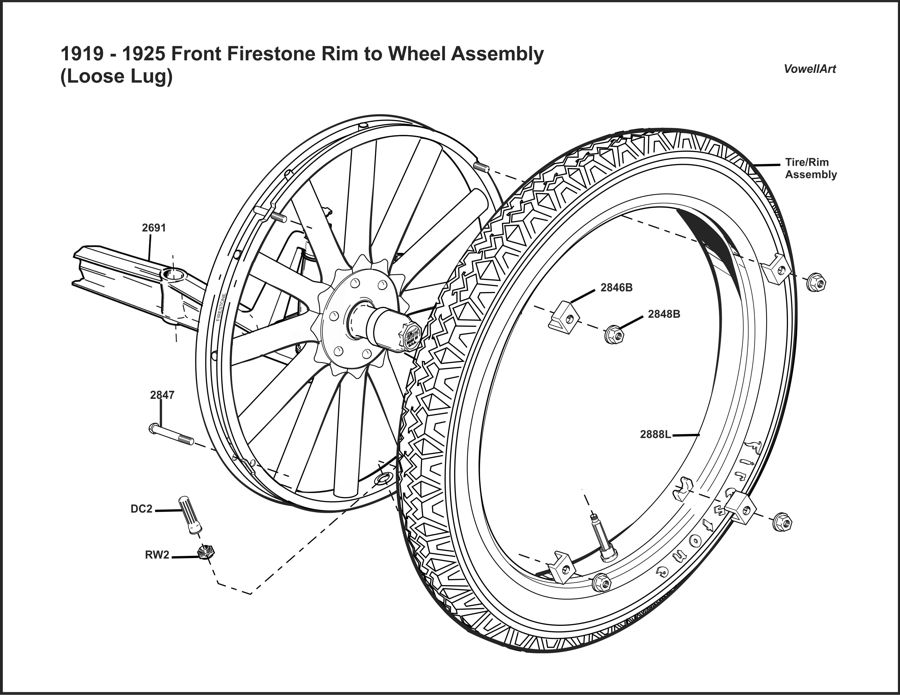 From what I've been told apart from the Ford Standard wheel, this is the second most popular configuration, found on many cars in the US and Canada.

Martin, I know nothing about the Firestone wheels and rims. I can see the notches in the felloe at the rim bolt holes, and that the felloe has no rolled in outer edge. I cannot see how that lug like the Kelsey lug can work in that application with no 'foot' on the felloe for it to engage upon. Perhaps the lugs are a little different somehow?

May be this is the type, 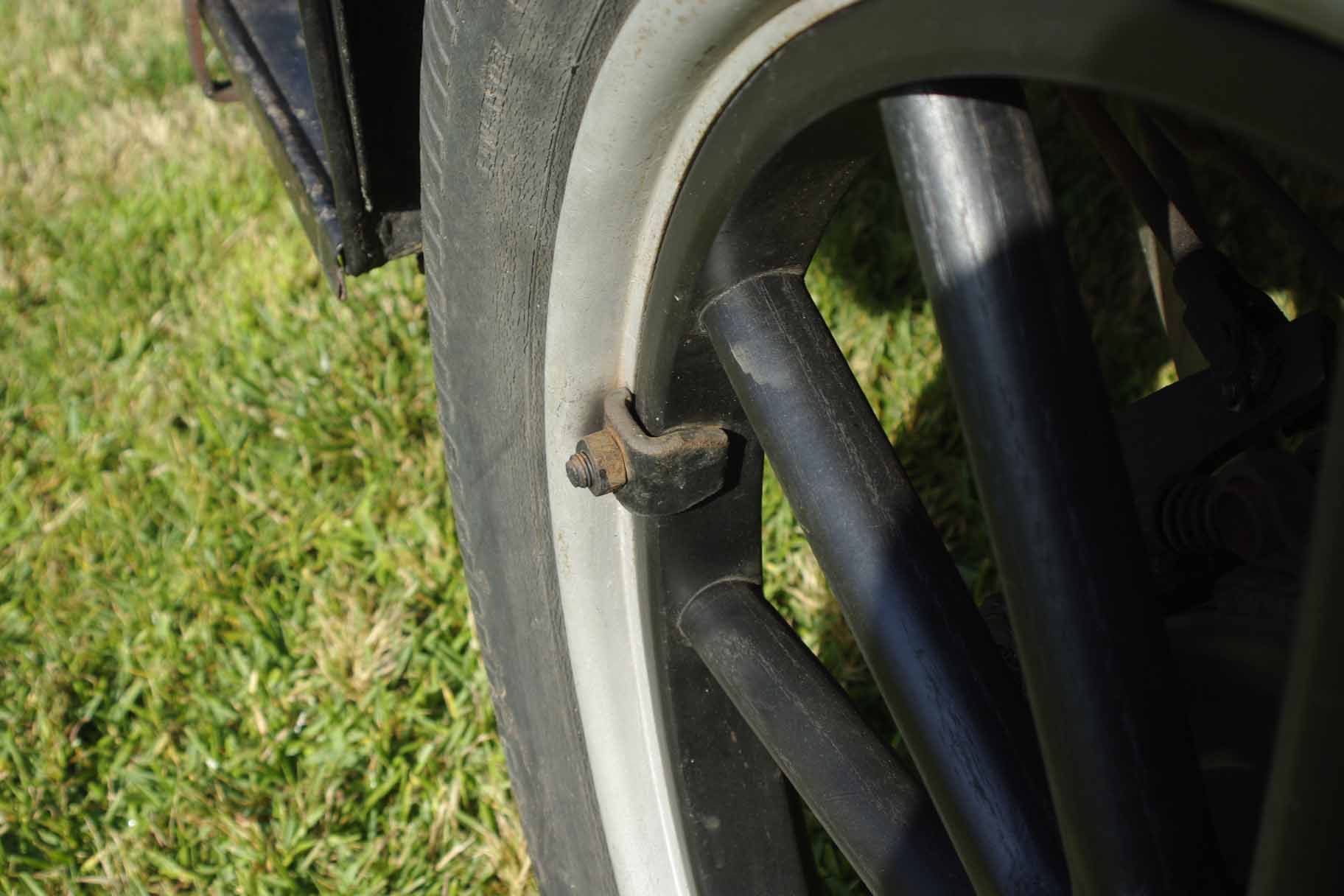 the felloe drawn looks to be Hayes.

Those Firestone demountable rims were first available about 1910.

A give away clue for those rims was that they always had 5 lugs.

On the old Firestone advertisement that James Golden posted, showing a set of wheels, there is a socket lug wrench included. It is shown in the lower left in the picture. If someone has a set of these accessory wheels, and would like to get the special wrench that is stamped "FIRESTONE", send me a PM.

Ok, Made some changes... 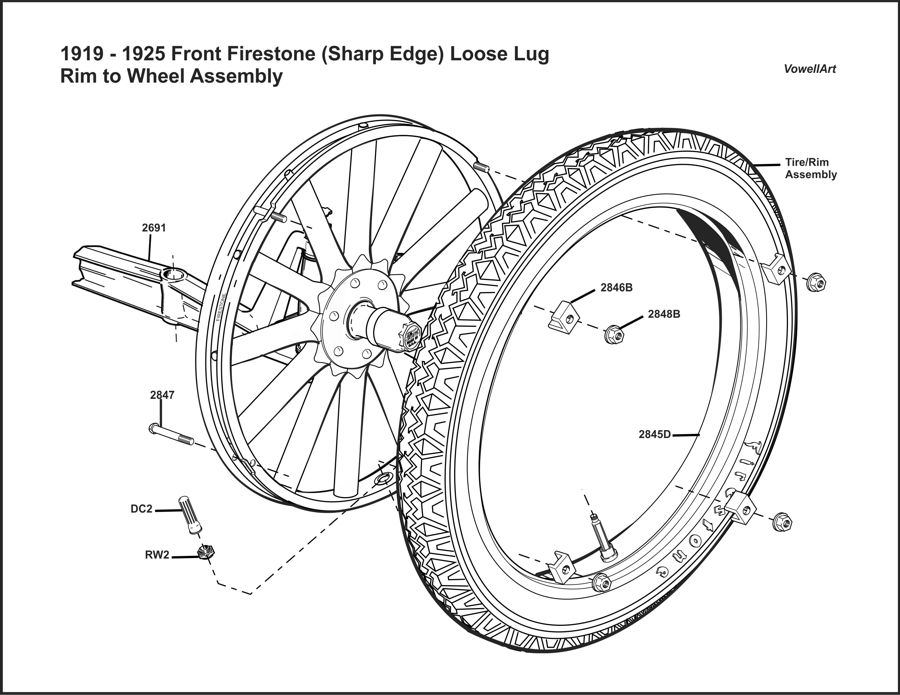 For lack of a better description I called the "Sharp Edge" Rims.

And these as "Rolled Rim".

Thanks guys for your input, never seen like these wheels before, my car has Hayes wheels and rims.

If this is still not right, I'll keep making changes until they are.

Peter, do you know if that nut is captive in the lug on your wheel photo? I have not seen lugs/nuts like that on a T before.

Peter, do you know if that nut is captive in the lug on your wheel photo? I have not seen lugs/nuts like that on a T before.

Martynn, my apologies for mis-spelling your name. I only just realised this.

If the lugs Peter shows are Firestone lugs, they are made differently than the Kelsey type I am familiar with. Kelsey lugs appear to have been shear cut from a hot rolled U section. The cuts all vary and there is some deflection of material on each.
From Peter's photo, the lugs appear to have been bent into the U shape using flat rolled stock, which gives them a rounded corner at the bend. Your drawing could reflect this if that is the correct lug for a Firestone wheel/rim combination.

Let's hope someone can put us on the right track.

Tis ok Allan, I was misspelling your name as Allen for some time there, besides, my name tis an odd spelling t'be sure, but they're all pronounced the same.

As soon as we find out from Peter what his lugs are I'll make the change if they are indeed Firestones or list them as an alternative if that be the case also.

Allan,
The nuts are not captive, I took that photo years ago when documenting all the different types. Its probably the type least seen, looking at the first drawing it appeared to be the same method used, one version of Kelsey wheel uses exactly the same method.

I like Martynn's drawing but there needs to be a close up insert or closer drawing of the actual clamping process of the rim to the felloe of all the different types. The usual ones used from the Ford bulletins does not tell the full story.

Here is a Kelsey drawing of one of their designs which shows exactly what is intended and shows both the clamping to the rim and how the lug contacts the felloe. 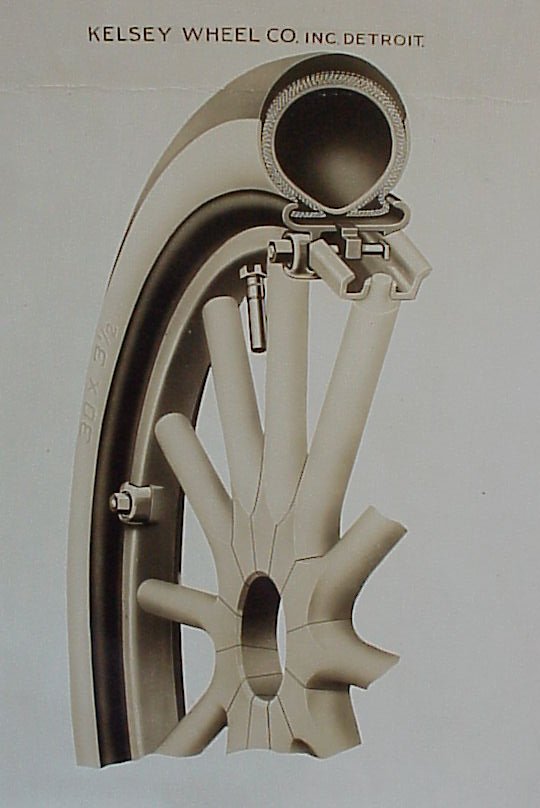 Peter, that is the clamping action, but I think that kind of lug has the captive nut and the lug is a forging, not the usual type we see most.

Maybe a sectional view, because this shows the lug, but not whether the nut is captive to the lug or not. In such a drawing as I am proposing, you'll see the different parts in cross section, which may give a better representation of these wheels/rims. You could show multiple methods of how the clamping action worked. Now all I need is a few things, like what does this lug actually look like? The other's I'll make, post here and let you guys check them and tell me if I'm close or not.

These drawings I've posted so far are IPB (Illustrated Parts Breakdowns), they're never meant to show how anything works, only how it goes together...to show an assemblies interaction with it's parts you need a cross section...that shows the parts as they lay in relation to the other parts they fit with. I usually make those first (because I work from top assemblies) but in this case I didn't because these assemblies caught me uncomprehending that there were more wheel/rim configurations other than Ford Standard and my Hayes....sooo, let me cobbles something together, post it here and see what flies or needs changing some.

The Kelsey sketch I posted is from 1917 and USA ( I have a Kelsey sales booklet which shows all their products including their Ford bodies.)

Australia did not get the forged lug as far as I can tell probably because of the war and the fact we got our Fords from Canada ( who seem to always have a slightly different take on a design) but someone must have wheels with this design or at least a lug.

Peter's Kelsey sketch introduces another discussion point. The cross section of the rim shows an inner land on the rim as well as the usual outer land. It would appear that both lands were designed to wedge onto the rolled edges on the felloe. I have never seen this on any T wheel.

On the fixed lug rim/wheel combination, the inner land on the felloe is wider and the rim in this case wedges on this wider land. The rim lug sits off the outer face of the felloe and the credit card can be inserted between the rim and the felloe on the outside of the wheel.