Before all the purists get on my case, I know committed tail light sacrilege by doing this, but I wanted a REAL brake and tail light in the interest of safety. And I don't like ugly plastic modern add on tail and brake lights. I like to made subtle changes that don't show, and does not damage the part I'm modifying. A little background on me. I have a BMW motorcycle restoration business, and I supply parts for antique BMWs. I had LED Brake & tail light boards made, that work on 6 OR 12 volt, with license plate illumination, for the Hella tail light on the motorcycles. It just so happens, that if you belt sand a little off the diameter of one of these boards, it will fit right in front of the wick holder, and you can glue it in the reflector with silicone seal. In order to bring the wires out of the tail light, with the least amount of damage, I took the tail light apart, and removed the carriage bolt, chucked it in the lathe and drilled a hole through the bolt, so the 3 wires exit through the center of the bolt. The photos show the results. you the light in the photo is burning on tail light, the brake light is much brighter. And you can see the tail light illumination shining out the clear lens. This worked so well, I bought a second stock 1915 tail light and mounting bracket and put two of them on the car. 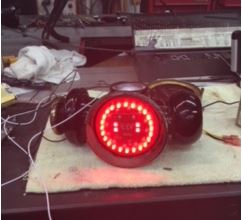 Here is a photo of the board before I glued it in on the front rim of the reflector. You can see the license plate illumination of the LED board on the posts. 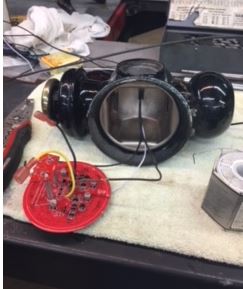 Looks nice and some can see it. Might keep you from being involved in a accident.

Craig, it looks good. You will probably have requests to make more?

Any chance you weakened the bolt enough to have the tail light fall off catastrophically when you hit a bad bump? Or when you hit that bump for the 90th time? Not sure about your tail light, but I've heard of others running the wire out the slot where the burner adjuster knob used to come out.

Then I bought a TSSWA4 self canceling turn signal control.

Go here to see what it does:
http://www.turnswitch.com/Turnsignal.htm

I mounted LED's in the front lamps of the 1915 in a similar fashion, (for front directional, the rear brake light on each side acts as a directional also.) and used a double pole rocker switch for a ATV electric winch, which I mounted just in front of the left armrest, off of the mechanical horn. It is subtle in appearance, no ugly clamp on the steering column, and it is very convenient when driving the car. Since the rocker of the switch had "in/out" on it, so I made a a curved brass plate with "L" and "R" stamped into it, and glued it on the face of the rocker switch. 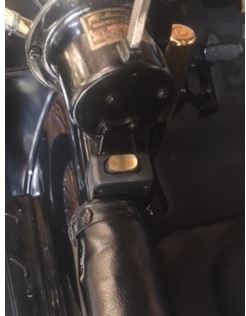 The farm kid in me still says "Fix it, and make it work!" ('Purists, originalists, and preservationists' beware!)

As far as fear of shearing off the bolt, I have had no problems, and since I am in Mississippi, I am forced to drive down beat up blacktop and wash boarded gravel roads, to avoid the idiots on two lane highways that drive at 70 mph. They have been mounted like that for close to two years, and I have made many, many trips (as far as a 251 miles round trip from my home to Tupleo MS and back on the Natchez Trace) with no problems. The photo of my car was taken at Witches Dance rest area on the Natchez Trace. 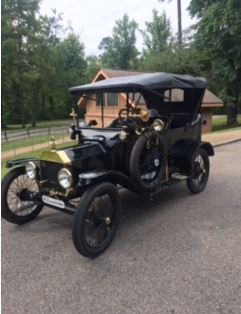 Two things -
1.) An elegant solution to a problem - one that I need to deal with on my '17. Original is fine until you get a pickup truck in your back seat. Any chance you will be selling the lights so others can follow your example?

2.) I think the drilled bolt will be fine. That said, you could probably snake a piece of stainless safety wire through the bolt and anchor it to the lamp on one end and bracket on the other ---just as a fail safe.

Craig, In the picture above, Is this the brake light and could you show a picture of the Tail light only?

I'm wondering how bright the 4 tail bulbs are.

When I installed an LED bulb in my brass taillight I had to insert a plastic diffuser to fill the glass lens.

I'm thinking yours has two different levels of light with all the bulbs on?

How about a picture at night with tail then brake?

Nice solution Craig. Making it available to other model T'rs would be cool. I made my own brackets and used 6V LED bulbs from SuperbrightLED.com. Not as elegant as yours, but it works. 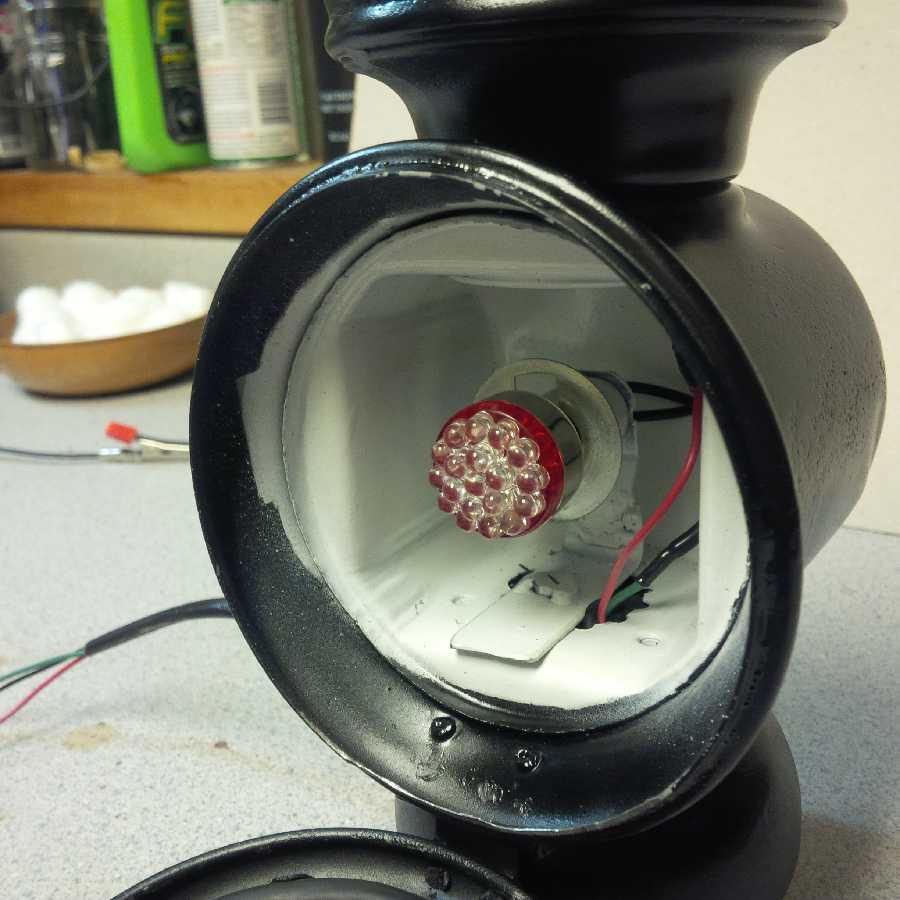 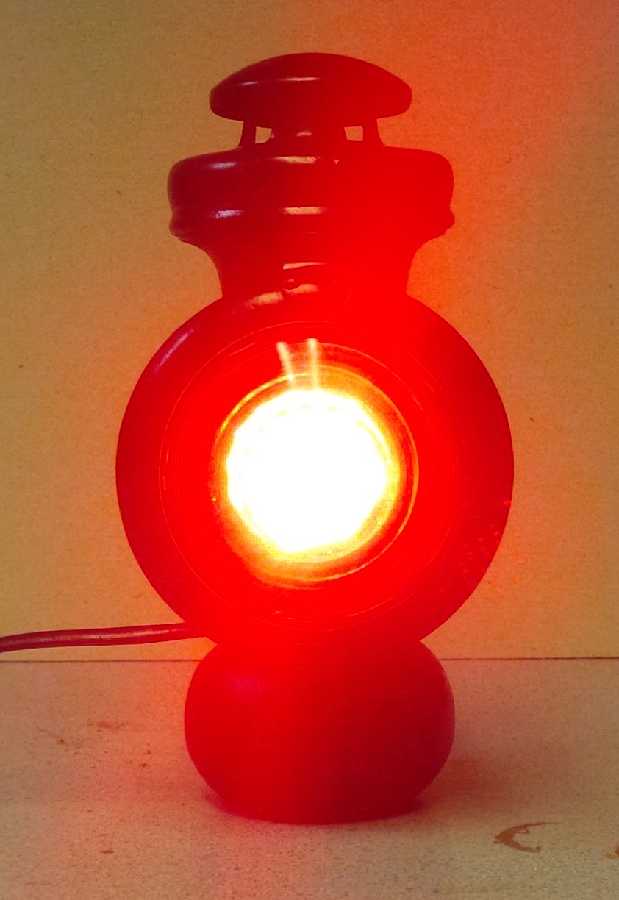 In response to your questions, this is the LED board running 0n 6 volts, and this is the tail light feature 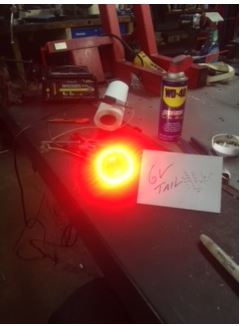 Then, this is the brake light, running on 6 v The phone camera does not do a good job, because it is so bright, it won't make a sharp image Trust me, the brake light will put spots in your eyes, from 18 inches away if you look directly at it 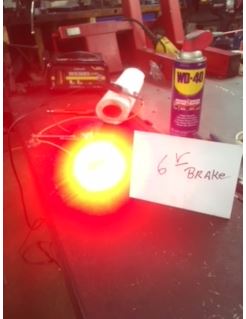 I did the same thing to the taillight on my ‘14 about a decade ago. So far, nobody has complained about it. I ran the wires through one of the holes in the chimney, so it would only take about ten minutes to return it to stock.

Does that box require a resistor or bulb to light the LEDs? Every box I've seen needs a bulb or resistor, so what's the point? Might as well use the bulb in the first place!
Box is a bit pricy!
Wireless would be nice.....

These have the same amount or more of light output on 12V as well?

I then fed the wires through to the back of the light body, drilled a hole to line up with the taillight bracket and then drilled down the brackets stem and out the back of the bracket so the wires go into the car body behind the mounting flange.
That way no wires are visible between the lamp and body. The hole is 1/4" enough for the 3 wires earth, stop, and tail.
I have stop/ tail and blinkers on a tail light on each side of the Lamsteed kampcar.
\image(tail01}

I then fed the wires through to the back of the light body, drilled a hole to line up with the taillight bracket and then drilled down the brackets stem and out the back of the bracket so the wires go into the car body behind the mounting flange.
That way no wires are visible between the lamp and body. The hole is 1/4" enough for the 3 wires earth, stop, and tail.
I have stop/ tail and blinkers on a tail light on each side of the Lamsteed kampcar.
\image(tail01} 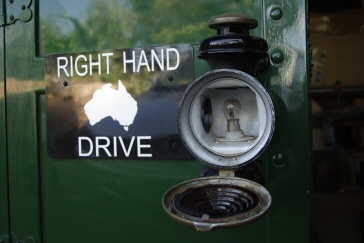 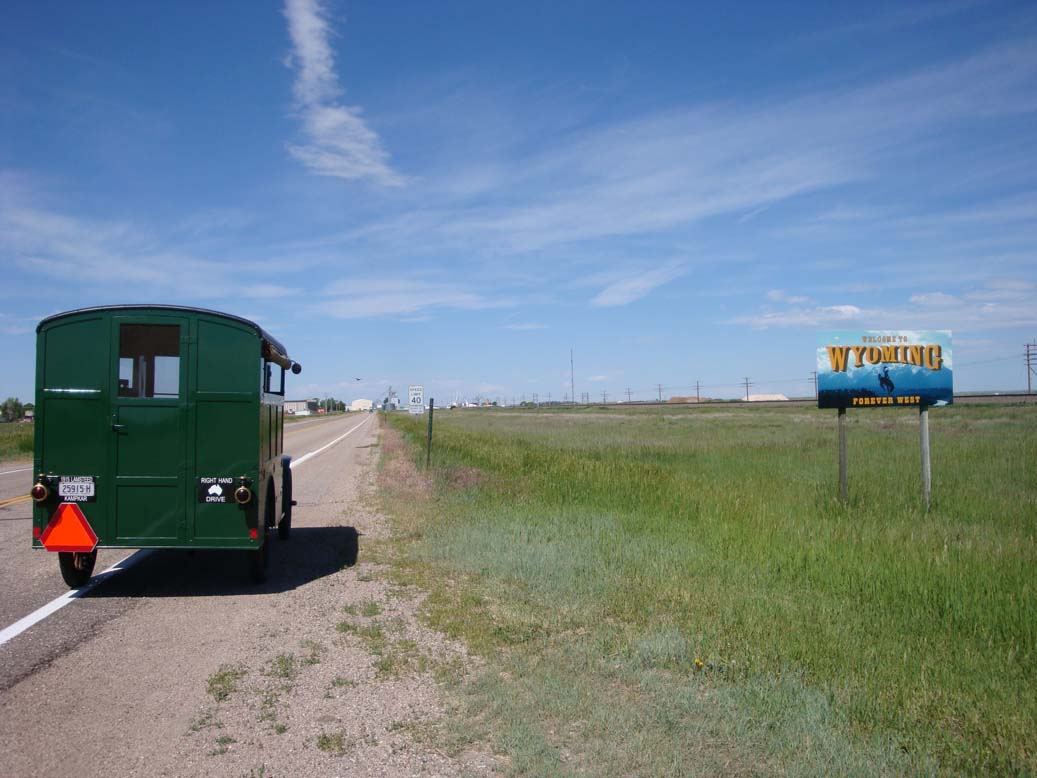 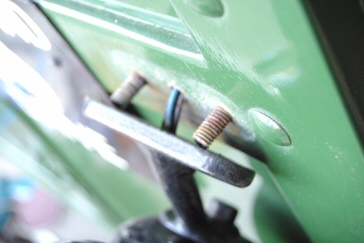 Jim,
You asked "Does that box require a resistor or bulb to light the LEDs?"
The TSSWA4 self canceling turn signal control works with any combination of LED or conventional bulbs. Works with positive or negative ground also! No additional bulbs or resistors needed.
It is a self canceling flasher. Stupid and simple, has been my experience with it. I have one on the 1915 and I bought another for the 1922 that we just acquired. Being the old school person that I am, I prefer real, fool proof wires, not magic electronic wireless "connections" powered by little batteries, so I'm happy with it. Yea it costs some money (and no, I have no affiliation with the company) but it is 2018 and gas isn't 24.9 cents a gallon anymore either!

I was just showing people what I did on my car. Everybody can do whatever they want with their car. But this is how I did it.

And Gene, you asked if the LED boards I have are brighter on 12 than 6 volt. Not that I can tell. They are just plain BRIGHT!

Craig and Steve, Are either one of you guys running LEDs for headlights?

I am using some Hella driving lights on my '12 inside my brass lights but they are Very power hungry on my 12V battery with no generator.