As I looked for some good used rods in my father's stash. I noticed some have oil holes in the top and some in the cap...some had no holes at all. When and where did the holes appear. I assume you need holes in the cap, if you have dippers.
I also see pictures here of some that had holes in the rod and the cap...would I benefit from drilling a whole in the rods ? I have holes in the caps with dippers now.

Holes would have been drilled by someone, the only hole needed is when using a dipper, any others like in the rod are of no benefit, in fact it will screw with the proper hydrodynamic lubrication of the babbitt.

As far as I know (except for a few of the very earliest ones), Ford never during the production of the model T Ford drilled oil holes in the connecting rods or caps. Many people, from WAY back up to this very day have believed that more oiling was needed. Some have believed that a small hole at the base of the rod to drip splashed oil in onto the bearing from above was the best way to go. Others thought a simple hole in the center of the cap was best. Let the splash shove a little extra into the center of the bearing. Yet other people believed that a dipper or scoop had to be used to adequately supply the bearing.
Whether such efforts really helped or not? regardless, rods and caps with all varieties of holes, here, there, somewhere else, dippers or not, can be found.
With the higher speeds we drive today, I suspect that an added hole may help some. However, I doubt that the "some" makes really much difference. IF (that big IF again) an engine has been thoroughly cleaned in the course of a rebuild? Dippers are probably okay. Old dirty engines with a half century worth of crud lurking in the flywheel and a dozen other out of the way corners? Dippers run the risk of some crud working its way into the troughs and being scooped into the bearing which could do a lot more damage in a few minutes than any good the added oiling would have ever done. For that reason, I have never really been a fan of dippers in model T engines.

I had debated to myself whether to post this comment on Steve Jelf's thread, because of a dipper problem. However, because the thread had gotten so long, I decided against posting it there. And here you ask a good question providing me with a better place for those comments after answering your question.
Thank you.

Wayne, So why do the Model A rods come drilled from factory? The A's are off set in the rod cap, had an ole boy tell me if you drill the center of the cap where is the crank location when it is in the pan? If you drill it should be to the back side of the rod so if any clearance some can go in? I figured that is why the A rods where drilled to the back side? Just what some one told me and it made some since to me? The late I,X beam rods came drilled like that.

Joe,
I can try and answer that, there comes a time in the size of surface area when it's not large enough to maintain it's internal pressure which at a peak can reach several hundred PSI, by maths the T bearing is about a turning point in that working area. All that holes and X'ing does is relieve those pressures which are needed to float the babbitt to pin on the crank. Ford found that out in the first T's and done away with X'ing. X beam rods had a very short life of use just like the tin piston.
As a bearing area gets larger like model A etc, a supply of oil is needed to work to per square inch to max hydrodynamic pressure.

Thank you Frank v E! I found that very interesting.
I didn't remember that Ford had dippers in the model A, however, they haven't built the model A since I think 1904

.
Seriously, I don't think I have really worked on a model A in nearly 45 years now!

The A didn't have a dipper, it was set up to have oil dripped on the big ends via a hole on the top and channeling to a swiping parting line if I remember rightly, some splash but a total lose system.
I don't know of any A's in Australia but 1 of which I did do the babbitt for. 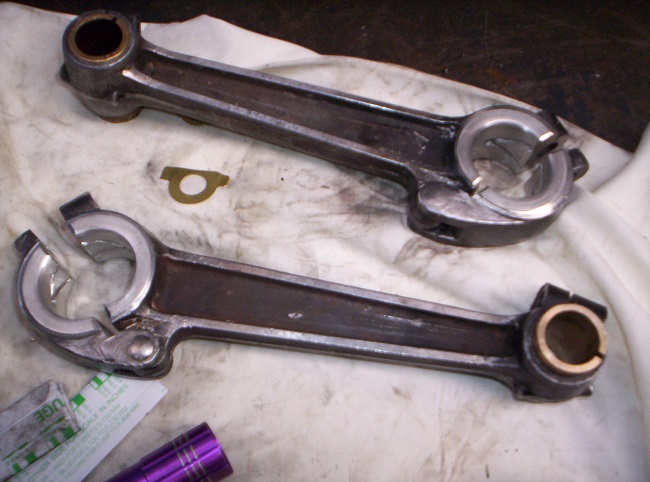 Again, THANK YOU Frank v E!!! Now, THAT is my idea of a model A rod! I never have worked on one of those. I sure wish I had one, and would love to work on one awhile for a friend. However, none of my close friends have one either.
Many years ago, several very good friends had model As (the later replacement post model T model "A"s). I bought one just to be part of the "group", however, after working on it for a few months, I decided it was just a bit too modern to interest me as a collector car. So I sold it, and concentrated on earlier '20s non-Fords, model T Fords, and what we in the USA refer to as Horseless Carriages (pre 1916s) or brass era cars. I also sold the 1929 Reo I had as it was a bit too modern.
I think that the last time I actually worked on a model A Ford (the later ones) was one a very good friend of mine had. I rode with him on many tours in the car, and he often rode with me in my model T. We often helped each other work on our cars. He sold that model A about 45 years ago when he moved up into a 1925 Lincoln sedan which he kept for the rest of his life. Another close friend also had model As in those days (which I also worked on some), but he sold them for earlier cars also at about the same time. Several other close and good friends have had (some still have) later model As, however I can't recall working on any of them in recent decades.

The 1910 Fuller I used to have had hinged connecting rods, and a "total Loss" oiling system. I sure miss that car.
I need to get back out and work on my model Ts.

They are ALL fun stuff!

Thank you, Frank for your knowledgeable input.
I had 1 rod of the 2 I replaced that I had to drill the cap for the dipper. That rod was a beauty too, but I still had to file a few thousandth off the cap. Journals were all around 1.246-1.248".

In short, all the holes were at best...someone other than Ford's better idea !!

Frank, Those look like an F rod also, I have poured a few, once for a guy that was on a tour and a stop was in my town, so an over night job and he was back touring the next day with his F. That was my first experiance with an F, now I know of four of them.