At some point I would like to find a correct carbide generator for my early '13. My car has (I think) a mostly late '12 running chassis. There are three holes in my running board for mounting one. Any '13's I've seen have 4 holes. My headlights are Jno. Brown model 19's, that are all brass. I really am not sure what I'm looking for specifically and would really appreciate any input. Photos would be great! The hole in the splash apron for the hose is sort of "stabbed" with some tool fitted to do that. The running board mounting holes are in a triangular shape, with equal spacing. Looks to be roughly 6", for 5/16" bolts(?) I'll have to measure the holes.... 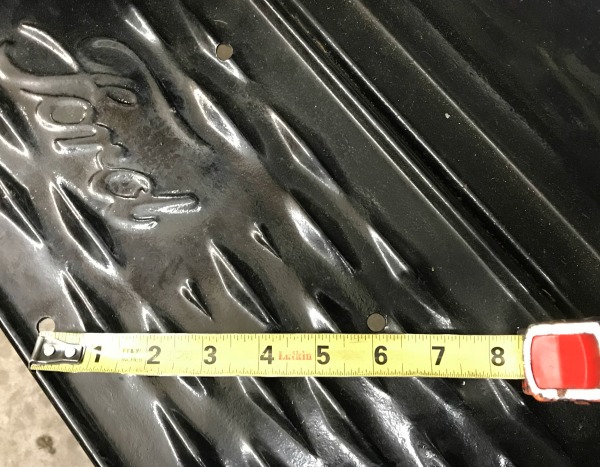 We seem to be following each other.

The rolled over hole in the splash apron, was punch made with upset below the apron, worked as a sort of 'grommet' to help prevent the hose from tears.

The 12 E+J tank mounts with three bolts the mount is the shape of a y If you have a langs cat. they sell the mounts

I also have a Victor generator with 3 holes, 6 inches on centers, that match up to Darren's running board holes. It is about 1-1/2" shorter than the Victor generator with the 4 square holes for 1913-14 Model T's, but I did not realize that until I set them up for the photos.
I wonder if these 3 hole generators were used on the real early 1913 T's, along with the odd Victor #1 headlamps? Or, were the 4 hole generators ready for the first 1913 Model T built? 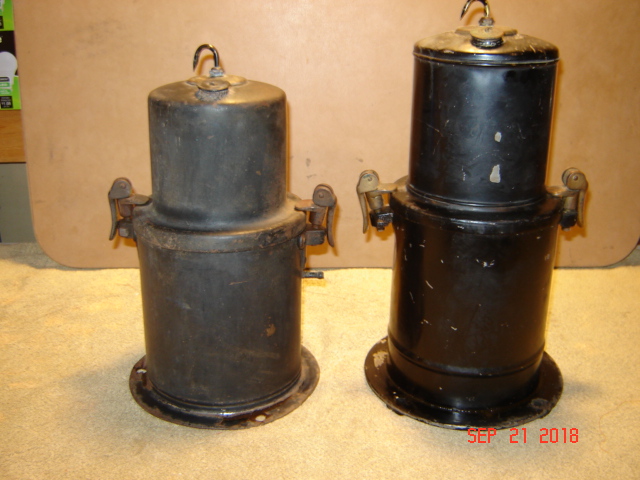 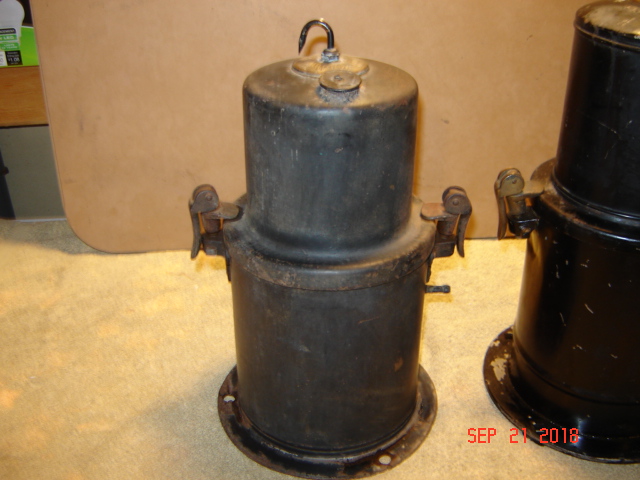 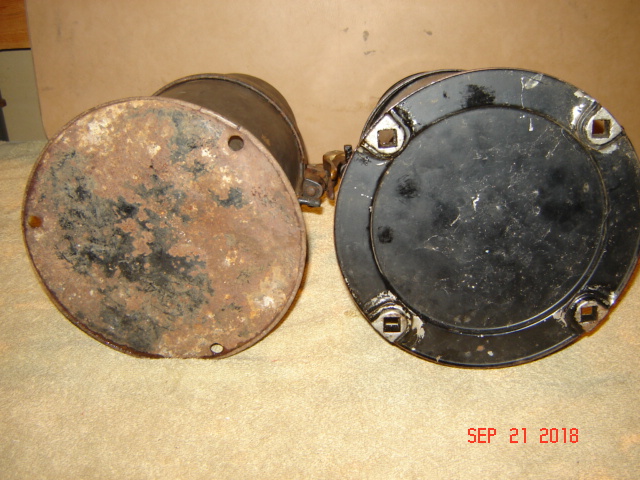 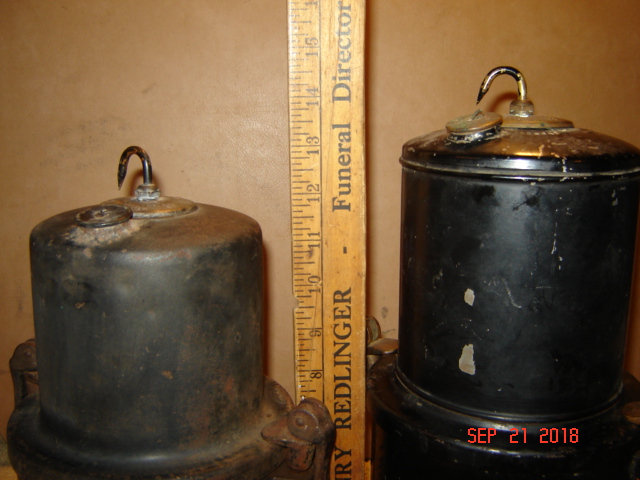 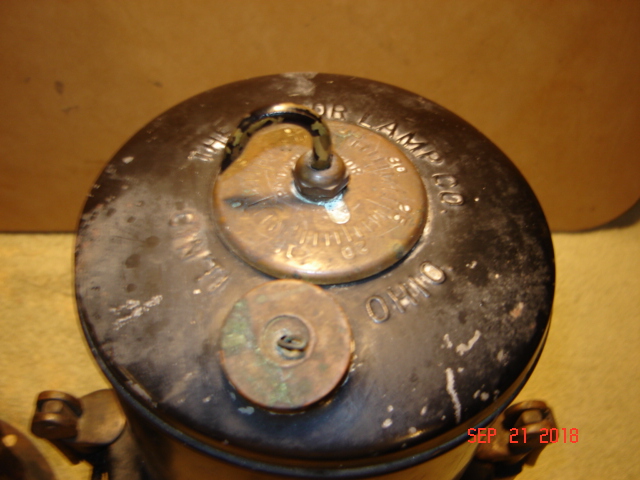 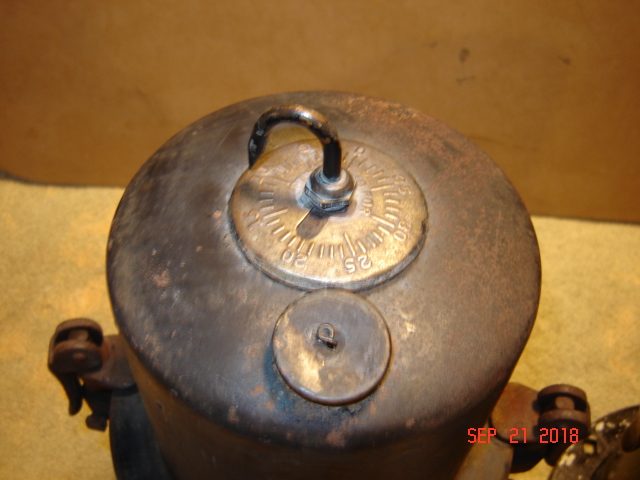 Jim:
Great bunch of photos. I would suggest that perhaps Darren use one of the B&B three hole generators.

Great pictures of the generators.

The 1913 running boards are factory "punched" to accept the four hole carbide generators and the splash shields were "punched and rimmed" for the 1/2" gas hose.

This probably all began about June 1912 during the 1912 models when the radiator was also punched for the acetylene gas hose line.

I have a NOS Victor four hole like you show. The generator mount holes are spaced 5" c-c and 5-1/4" c-c. The Ford factory running board holes allow the generator gas hose outlet to be "faced inboard" toward the splash shield 1/2" punched hole for the gas line whether the generator is mounted on the left or right running board (LHD or RHD).

I didn't realize the generator/running board hole spacing was setup like that until I checked mine a few days ago. The Brown and E&J are four hole mounts and the same as the Victor.

I agree with Larry. I'd use a three hole Victor as Jim shows above because it matches the Ford running board hole spacing and also puts the acetylene gas outlet in the correct position relative to the splash shield gas hose hole. That was most likely what was on it before.

Thanks for posting this very valuable info guys!

Darren: From looking at you photo, I don't believe those holes in your running board are anything Ford would have done. It just doesn't make sense to me. I would look at some Canadian cars in your area that have the style running board you have, and get some ideas from them.

Thanks Larry for your input! Just thinking out loud here:
I've done a lot of reading of things on this site and Royce's site too. It seems that one thing that comes up more than once is that the generators on US built '13's is that they're not central on the running boards, and that allows the "Ford' logo to be uncovered, and the area utilized where the false door is on the body. The four doors on our cars means the generator is positioned such that the door can be opened. If you look at Jim's photos of how the 3 mount holes are orientated, this positions the outlet nipple on the generator to face the car body and the hose just makes a gentle 90 degree bend to the punched hole in the splash apron. I've been around this car since I was a little kid and it never had a generator, however, the Prestolite tank has been with the car for a very long time. It was only put back on the running boards recently. The holes were there for the brackets and the brackets line up with the holes. The tank spent a long time in the back seat, just like I found it

I just left the computer and went out to take a few pics....

The three holes on my running boards were drilled, not punched. From my perception as a tool and die machinist, there's burrs around the holes on the underside of the holes, more on the holes that open in to the underside of the pleats where the angle is steep where the drill breaks through on an angle. this indicates to me they were done with a drill bit and not a punch die, as a proper die would most likely leave a nice clean job.
Once again I really do appreciate your input Larry, and that of everyone else as well. Please keep this chat going, and I welcome all new input. I find it all very interesting!

Could it be that my car actually used such a mixed bag of lights and generator brands?
I know when it was new, anything could have been done to it, but I would just like to put it back to what makes the best sense historically, and is potentially correct, and functional.

By the way, the red rubber hose is very petrified & original I believe, as my grandfather never changed anything on the car cosmetically. I won't actually use it when the time comes to make the lights functional. I've just mocked it up for now.
The only things changed on my car since the 1950's are the wood fire wall, and the top material and the paint that you see. That's another long story for another time.... 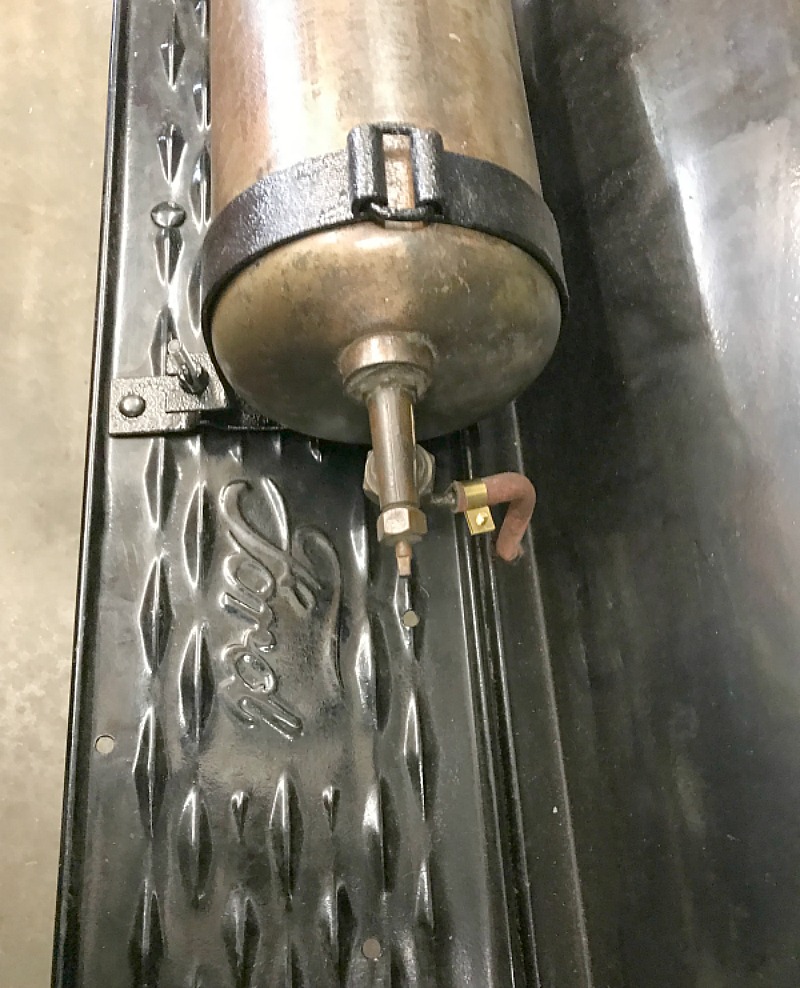 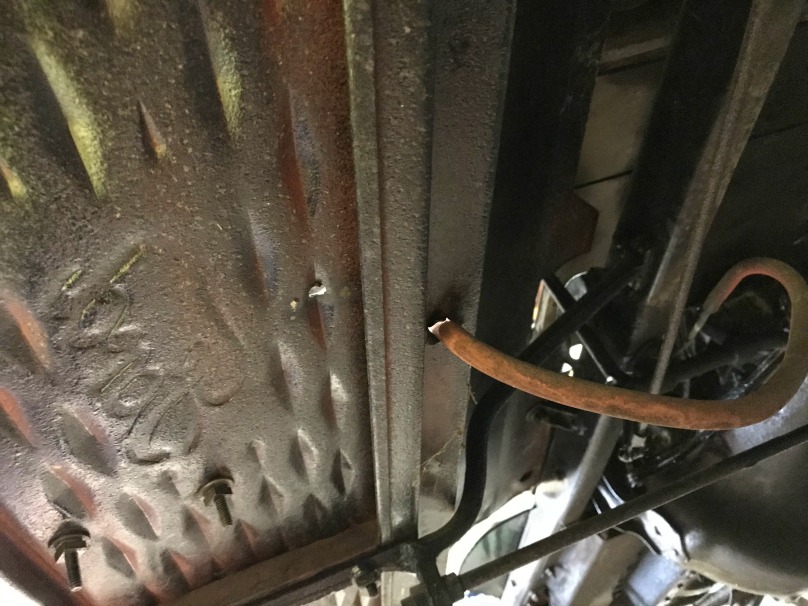 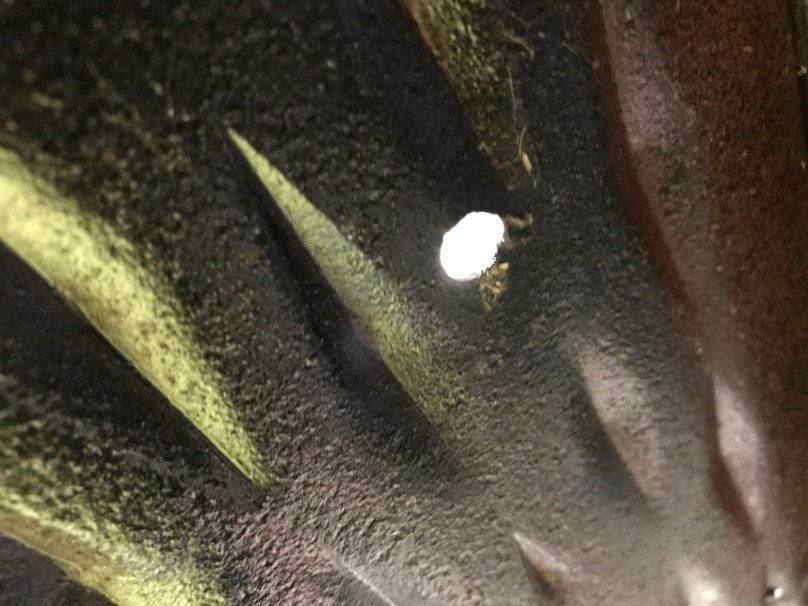 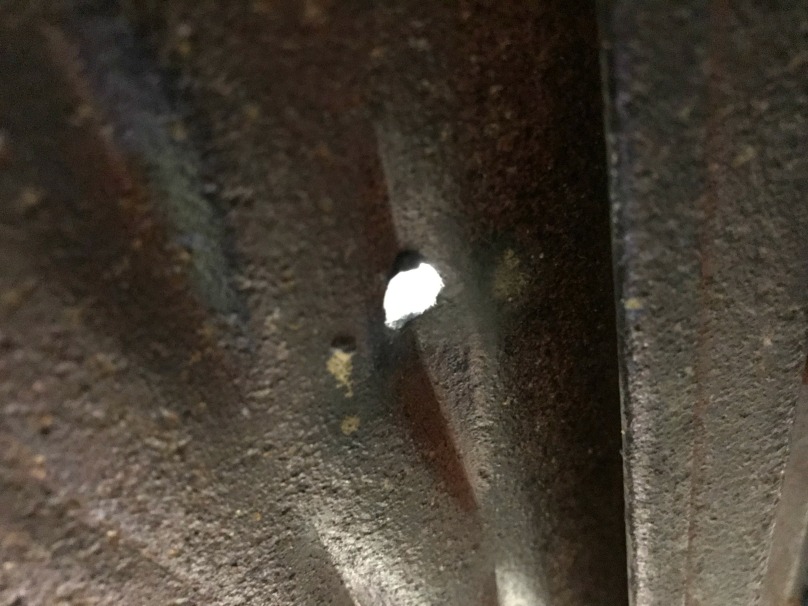 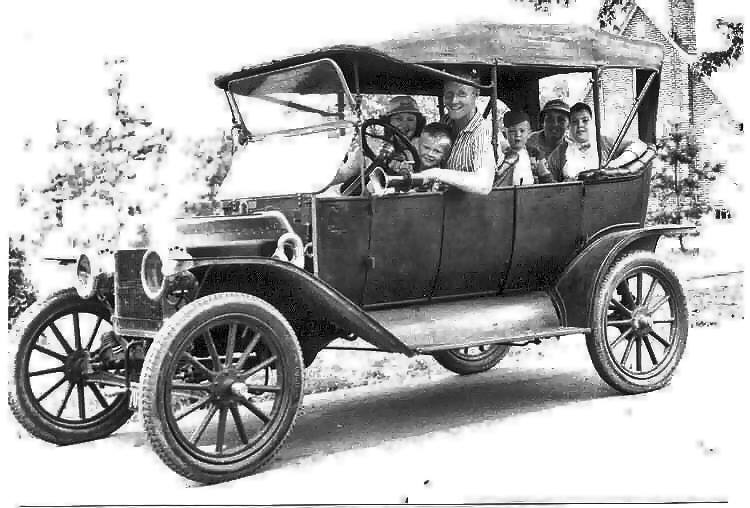 No Prestolite tank in 1929, it's too bad we can't see behind the newly wedded couple 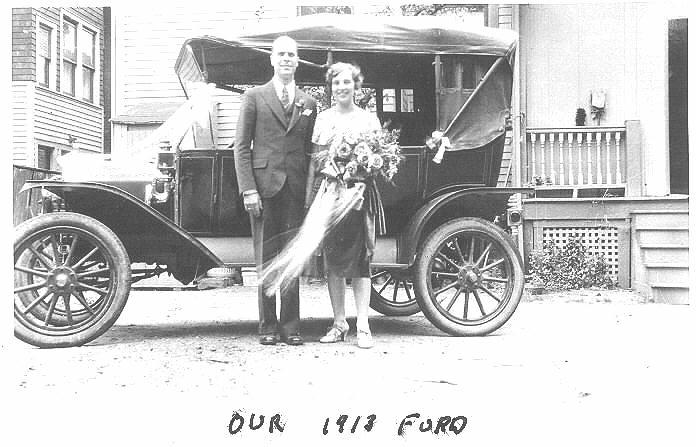