Been interested for the time frame that Ford first used the Pyroxylin lacquer paint, and recently found this tidbit in automotive news of the day. In addition have always seen the photos of the 'new' finish showing no high gloss.

Bruce McCalley stated 'The actual dates of the changes are not known but it seems the Pyroxylin finish became available in 1926...' 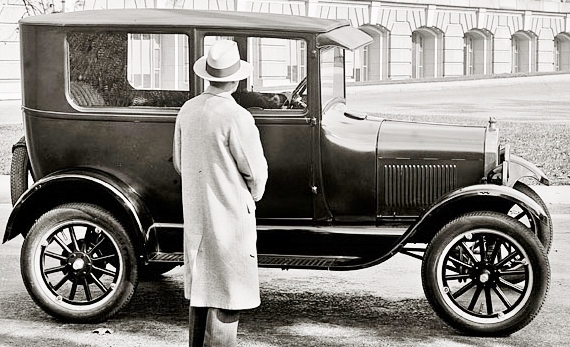 Now this article printed in July 1926 does give insight of when the 1926's were first painted with lacquer, and comments that the finish is 'dull'! 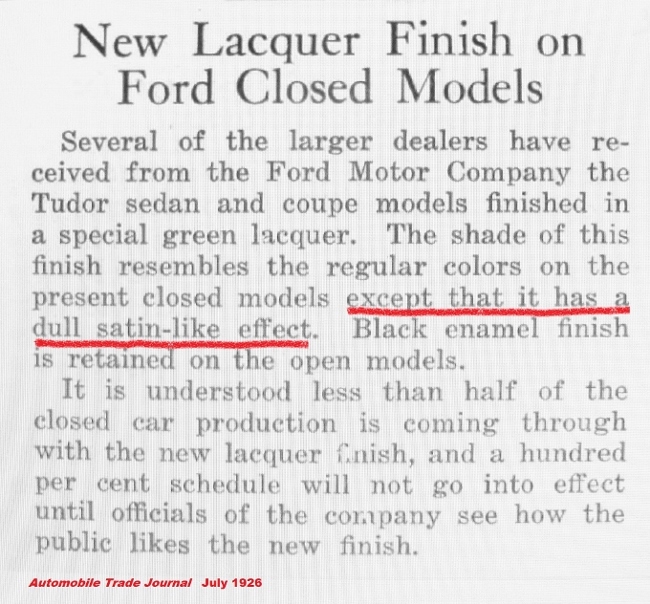 So, think now this is close to when the change took place, maybe as early as late June, for this article to printed in a July issue, and apparently rolled out over the months in 1926. 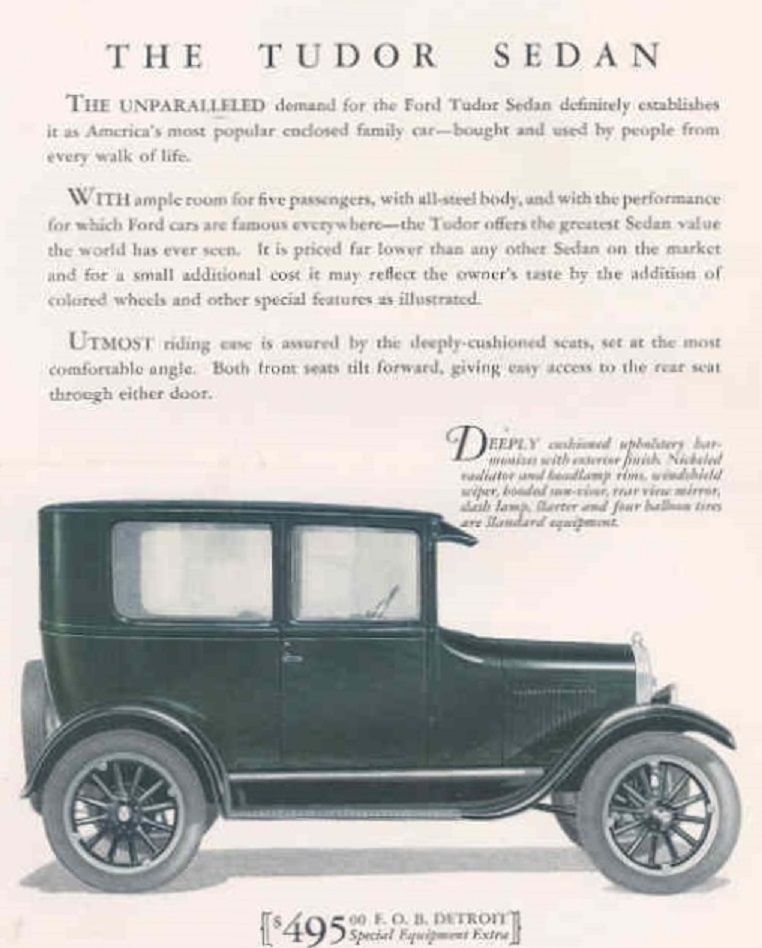 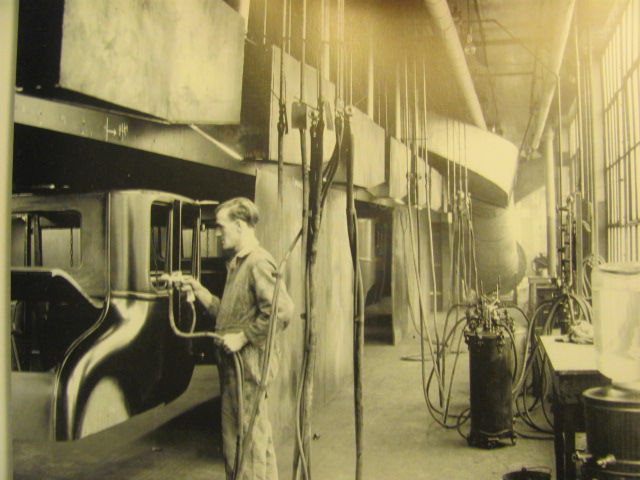 I make the basic pyroxylin here in our labs all the time. Easy to make and to thin enough for spraying ... but very flammable ..

I have a 1926 coupe and, while I want my T as original as possible, there is no way I would paint it with a satin finish and had Ford had the option of using high gloss lacquers like we have today, I believe he would have done so, but he did not have the option and had to use what was available at the time.

If that painter painted every day without a respirator, he must have had a short career with Ford, before the fumes of the paint fried his brain. If I paint for even an hour without protection, I get lightheaded, so I can imagine how it must have affected him, painting all day, everyday in an enclosed booth. I would guess that 6 months of breathing those fumes was probably the limit anyone could endure, before permanent brain damage occurred. Jim Patrick

Note the air handlers over the painter going to the big vent tube at the end.

Thank you, Mark. I didn’t notice that. Did the ductwork have a strong suction that pulled the fumes and overspray up and out? That would certainly help. Jim Patrick

I have seen this photo before, and it was described as a set up shot, and that the painter would be wearing a mask if he was painting, and that this was showing a primer coat being applied. Just wish I could remember which book I saw it in.

Whichever way Ford vented his paint line or whatever the painters used for a respirator I have a feeling they didn't last long at this job.
In that era people that worked around sand blasters, paint booths, shops that dealt with chemical fumes and etc, didn't have the luxury of safety given now in this era.

Daryl, what you mention is very similar to the caption of a photo in the popular 1915 book "Ford Methods and the Ford Shops" (though it could have been used later on in another publication): 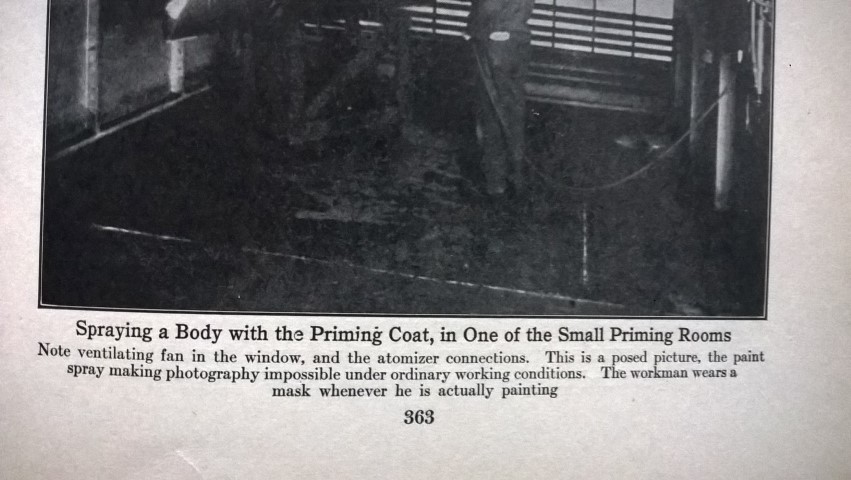 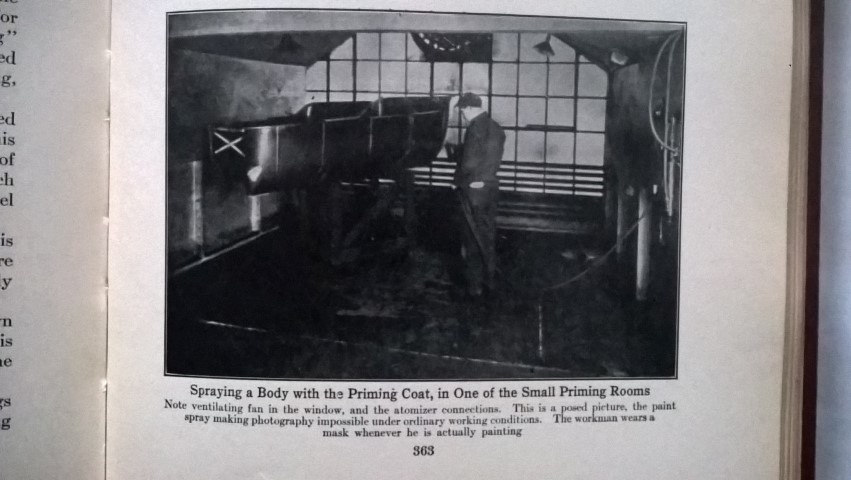 Ford did use safety in mfg. at the plants, esp. by the time the new Highland Park plant was up and running. 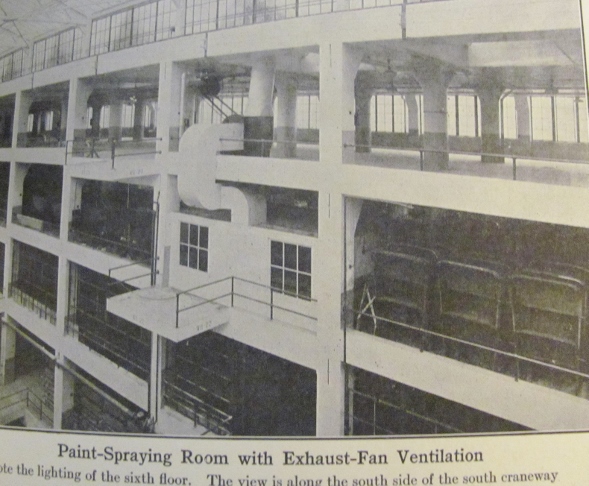 That huge building had its air changed completely within 25 minutes using the round columns as vent stack, using huge sirocco fans, with heat and cooling to keep the whole factory 65-70 degrees around the clock. {p. 412, 'Ford Methods and Ford Shops'} 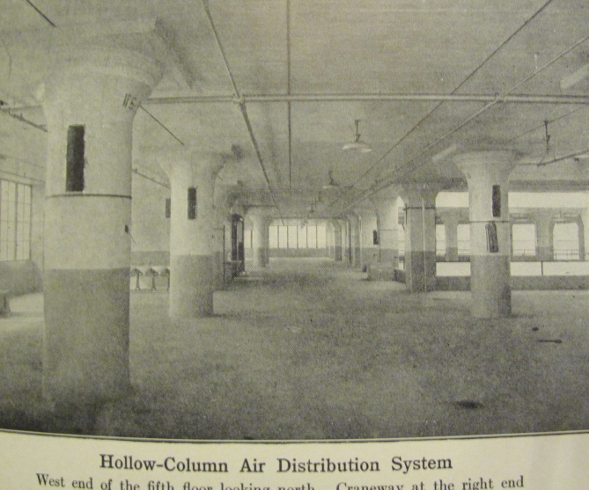 As for the earlier painting in 1915, the brown primer coat was sprayed on, in paint booth, the lower caption states the worker would have on a mask at spray time. 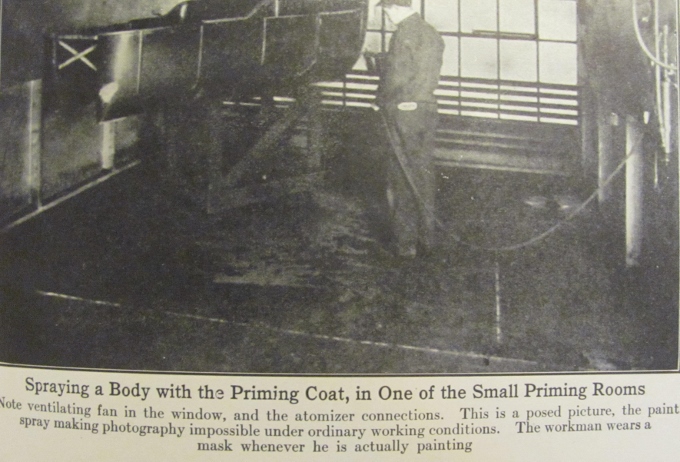 And the regular painting early was 'flow', early on so the paint wasn't as airborne like spray paint would be. 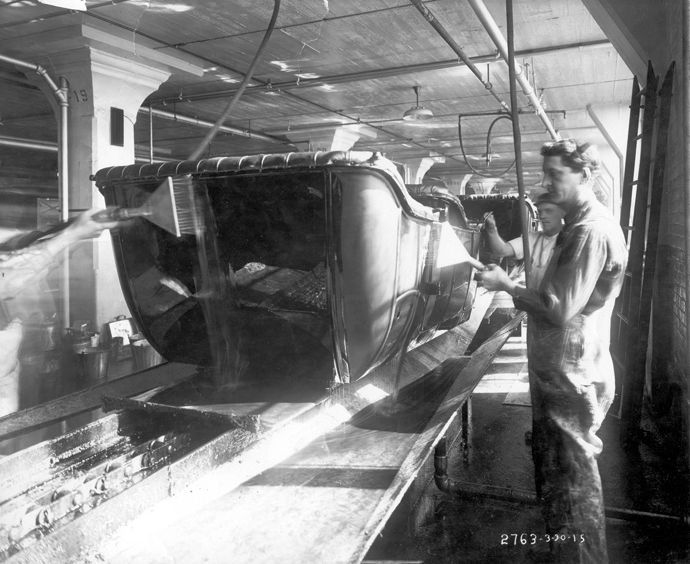 And later 'flow' painting enamel on the Improved Car body, late 1925, this most all metal then went thru dryer to bake the enamel too. 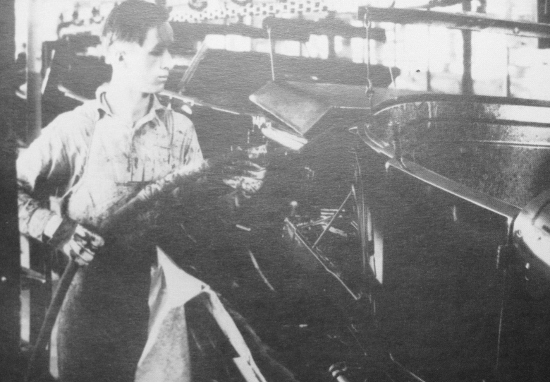 Similar processes at the various Fords plants around the USA, this one in Indy. 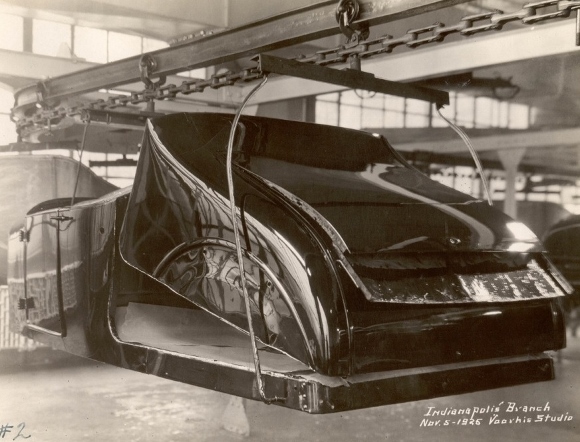 Thanks Walter, I may be mixed up on what caption went with which photo. I have that Ford shops book as well. I wish I could remember the book I have that has the photo of the '27 coupe being painted. Guess I will be looking through books tonight!

Most photos showing painters painting auto bodies, show them spraying without respirators so I feel that the wearing of respirators was a personal choice and most painters chose not to wear them. It is interesting to note that the publisher of the photos states that the photo is staged and the painter normally wears a respirator. If that were the case, how difficult would it have been to ask the painter to don a respirator for the taking of the photo.

Before the age of MSDS’s, OSHA and hazardous product , the average worker probably had no idea that paint fumes could cause permanent cumulative long term damage to the brain and lungs. Of course workers felt the short term effects after a day of spraying, but when they went home at night, they could recover overnight from shortness of breath and dizziness in time to go to work the next day. It was only after doing this for weeks or months and taking longer and longer to recover until the day that they did not recover, that it dawned on them that they did irreparable damage to their health. At the time, there were long lines of men wanting to work at Ford, so Ford had a limitless supply of labor to take the places of disabled painters. Jim Patrick

The Ford 1915 methods book states " This is a posed picture, The paint spray making photography impossible under ordinary working conditions."
The statement speaks for itself about conditions in the room when the workers were actually painting.
Without a doubt the room probably looked like a fog bank.

Hopefully the painters would have been wearing headgear that had its on air supply and didn't have many leaks.

There is a video on YouTube of the AMC factory in Kenosha from the 1970's. It shows painters without respirators. This was at the beginning of robotic arms painting the cars and the men appeared to be spraying where the robots missed.

If you have a car that needs a total repaint is it considered ok to use modern paints and methods to achieve a nice finish? I would suppose this would only come into play if I wanted to submit a car for judging at an event.

In a car show, would a 1926 coupe, painted a dull satin Channel Green finish with an equivalent primitive lacquer, such as was used in 1926, win out over a 1926 coupe painted a gloss Channel Green with a beautiful mirror finish, painted with a modern epoxy such as DuPont Imron? Jim Patrick

It would depend on how good a job you did on the interior restoration.

Say the interiors of both Model T's are identical and historically accurate. The only difference is the paint jobs. Jim Patrick

Back to paint/respirator question; in the Services Bulletins Essentials pages 405, 410-414 both talk about and show guys wearing the respirator.

A 1926 factory line photo shows the paint being FAR from "a dull satin". Nothing like the flow shine of varnish but Pyroxylin did show a reflective property.

The photo is too large to show here and the reduced size doesn't portray the reflective properties very well.

Have looked at many factory photos and have seen that effect too. Only going by the statement in the 1926 article of 'dull satin'

But have seen more than one original painted pyroxylin finish on late 1926, this one a coupe, and the outside was repainted, but the underside of deck lid is original. It shows today a 'satin' to me. 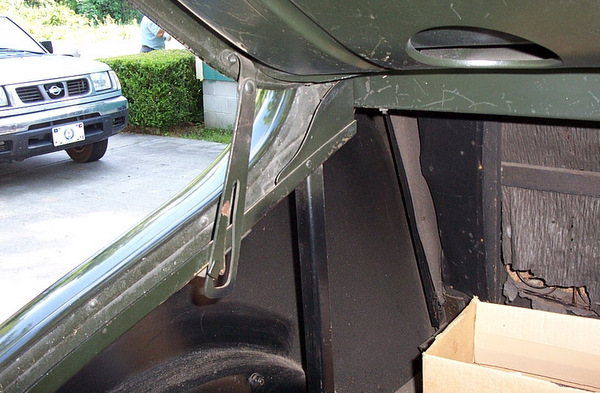 Also, the Services Bulletins Essentials pages on refinishing with spray pyroxylin, that Mark posted clearly discuss on page 412 - 413 the NOTE: (a) 'body thus finished has a matt surface which may be made glossy as follows'.

Note (b) Then it describes how to wet sand, wash, and then spray a final coat of thinner at half pressure, that will leave the wet sanded finish smooth and glossy.

Just like today, you can spray lacquer and it will most times be matt finish, then you rub the shine into the finish.

Could very well be that many of the paint methods at the various branches did rub and spray the pyroxylin to a high gloss, but original finishes I have seen aren't real glossy.

I would imagine that with the increasing pressures of upper management to speed up the assembly line in order to produce more T's, there was no time for the hand rubbing necessary to convert a satin finish to a gloss finish.

In 1970, I knew a 75 year old man that used to work at the railroad depot unloading Model T's directly from the factory and he said that the T's he unloaded, were still tacky and were covered in straw from the boxcars they were shipped in. Jim Patrick