So this poor little coupe was hijacked by forces unknown to the natural world. It decided to take a ride on its own. After it gained enough speed it took out 4 granite headstones at the local cemetery. It even picked the more expensive headstones to wipe out. But, look at the way the front axle ended up. It almost defies logic for a front end collision. 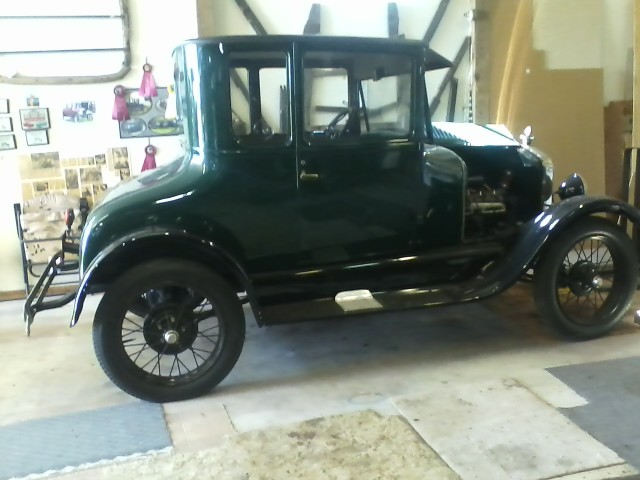 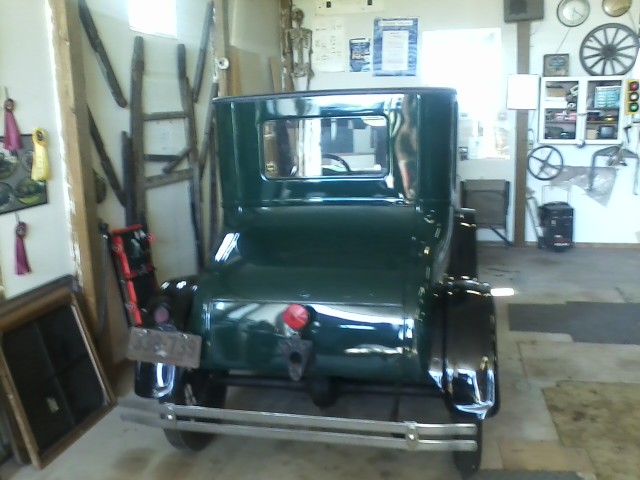 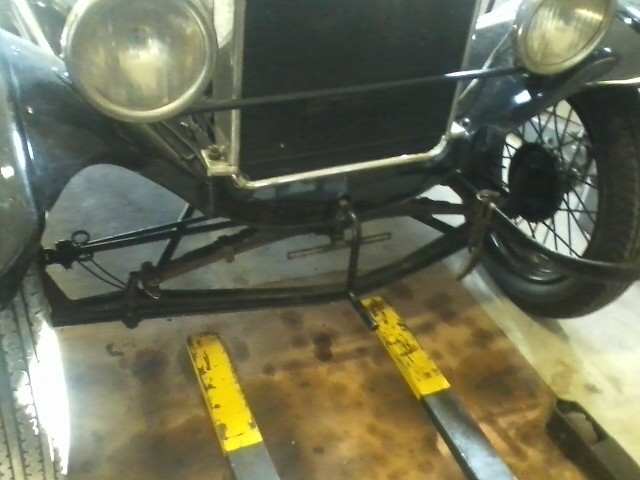 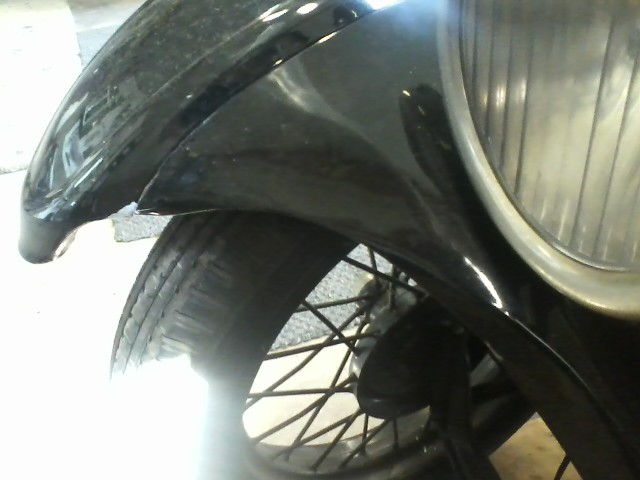 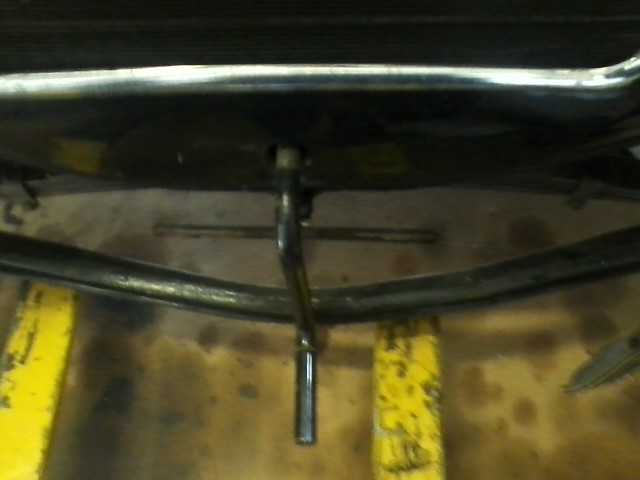 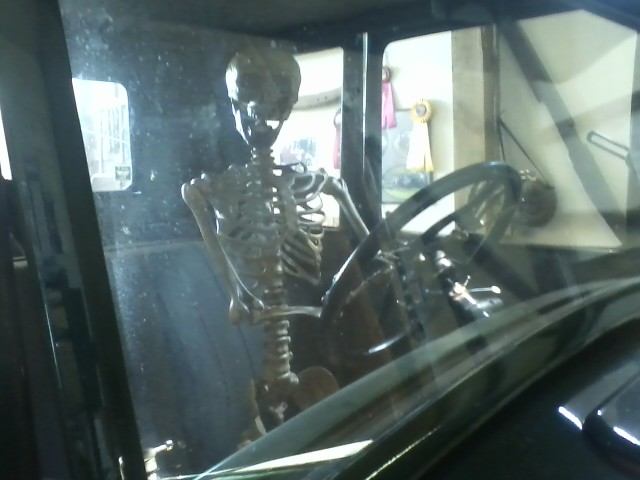 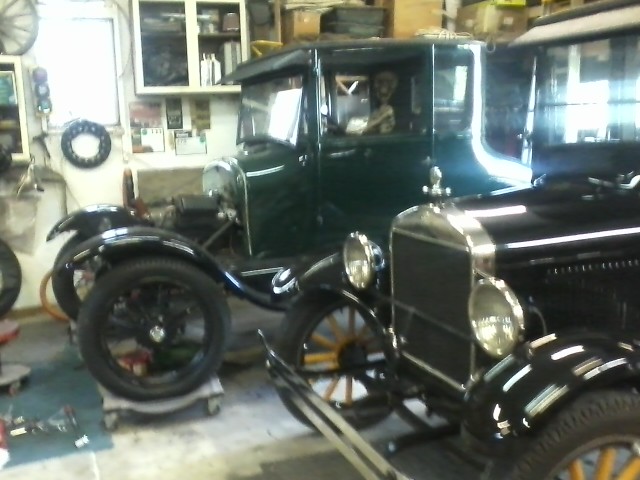 Looks like the guy driving doesnt have the guts to fix it.

Nope he doesn't ...he's just sitting there waiting. Yells out a "hurry up" now and then.

Must be female driver? Dont tell my wife I said that,cause if she stops cooking I will look like that.

Halloween is early this year1

Here's a pic of the car graveside... 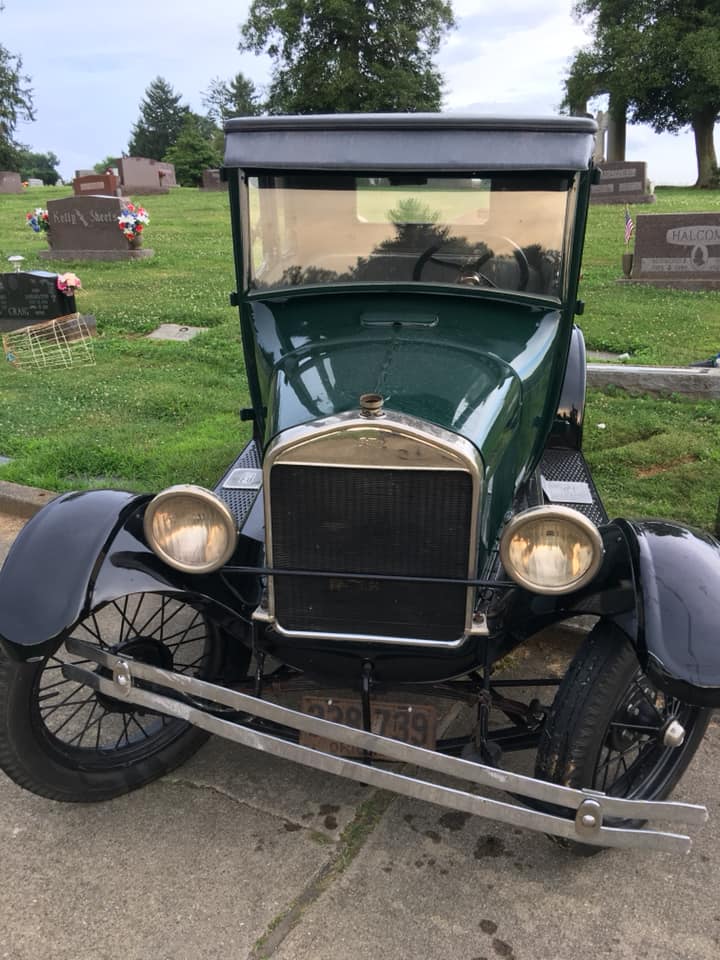 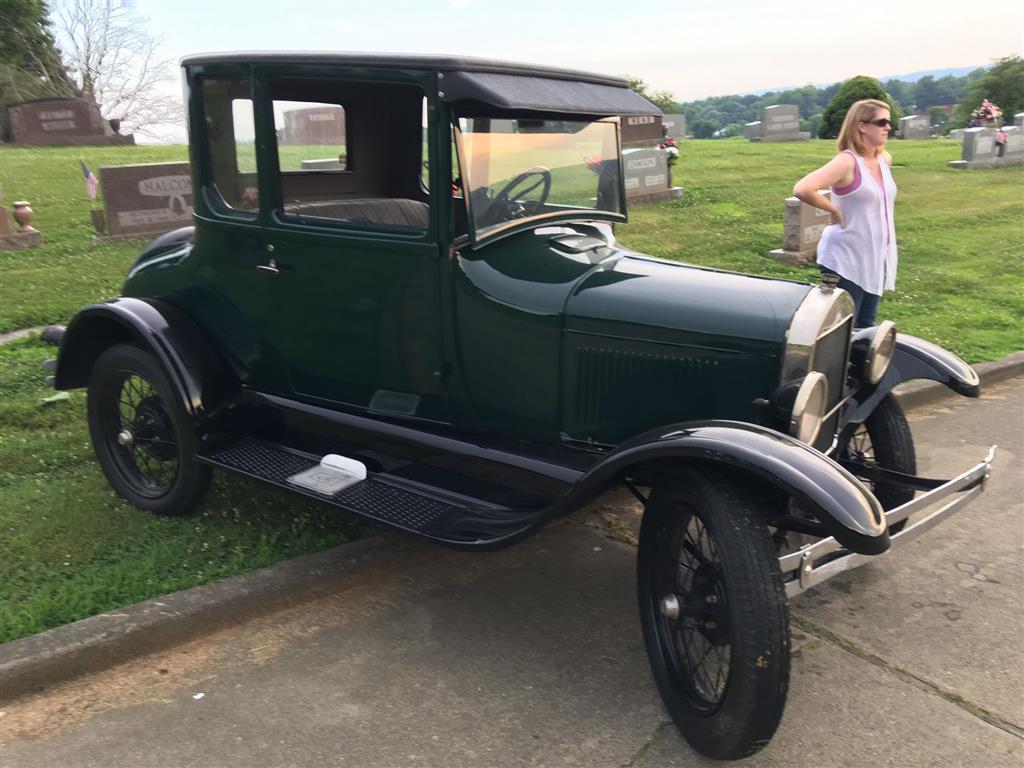 Are you going to repair or replace axle?

That’s what I call “knocking them dead” I bet people would have died to see that.

The two seater car crashed in the cemetery! So far, they've recovered 125 bodies! More news at 11!

Weird.
I can fix that axle.

Gonna repair that axle I believe. But haven't got it torn down enough to make the decision. Main concern is checking the frame for damage and the wishbone mount.

All repairable. Even the headstones.

Might want to do some research on previous T owners and the names on the headstones. I was cruel to a snapper mower as a teen and I swear it tried to run over me more than once.

Terry, it was, modified for this occasion! Bill

My question is "why did it run away?"

Was it running and the brake pawl fail?

Scott, he set the brake and had it against the curb. They got out to visit his dads gravesite. A few steps away they turned to see it rolling down the hill. They are life long T owners and very careful with their cars. Its just one of those unfortunate things. But, having said that it may have been a blessing, I took the wishbone off this morning only find the studs weren't cotter pinned or safety wired and only finger tight. God has ways of knowing what's best, even if it seems harsh at the time.

So the handbrake lever must have been adjusted to keep the car in neutral but without the rear brakes applied. What a shame since the line brake shoes have significant stopping power when adjusted.

I do not like to see these kinds of posts but I must admit that it is comforting to know there are other human Model T owners out there. I tend to feel that I am the only one who does dumb stuff at times.

I like that body color. Can someone give it a name so I can get a mix at the paint store. Thanks Eck

Even with relatively minor damage, and nobody hurt, things like this leave marks on a person's mind (what ifs, if onlys, self doubts). I always feel badly for the people involved.

The engine pan is the part that will need to be very carefully checked. I have seen that twisted axle damage before in connection to minor collisions. A good solid straight wishbone is incredibly strong in that singular direction, to the tune of several tons. It is an old engineering data point. A single common standard number 2 pencil (barring unknown internal defects), held perfectly straight, can support 500 ponds weight. (Just a bit of engineering trivia for you!)
With the wishbone and front axle nicely triangulated, the strength is sufficient that when the pressure is placed on the outer ends by the wheels, the outer ends of the axle pushes back forcing the middle of the axle to bend forward. That requires several tons of force placed against the pan where the wishbone is connected. That is enough force to distort a pan in a dozen different ways. I have seen a couple pans after similar faux pas. They looked good at a glance, Careful checking found the hand crank and nose was crooked, both mounting arms bent, and entire length of pan offset slightly (removable cover stopped it from bending farther when all the bolts on one side slammed into the front while the other side hit the back of the hole). The wishbone mount casting was pushed in a lot more than believed at a simple glance from the outside. On that one? The engine and transmission seemed to be fine once installed onto a good straight pan. I saw that pan after the engine was removed from the pan.
Offset or angled collisions hit the wishbone more crooked, placing stresses differently. In many of those collisions, the wishbone gives quickly, causing less damage to the front axle (usually still bent, but only a little). And often the pan is an easy fix, just pushing the wishbone mount back forward a bit. I straightened a pan with a minor bend like that myself a few years back. I don't remember which car it was for.

Hey Wayne, look at this. The high point is the front to the axle. 5 1/2" bow. So, I have to conclude the impact was almost equal on both front tires at the almost exact moment. What's your thought? 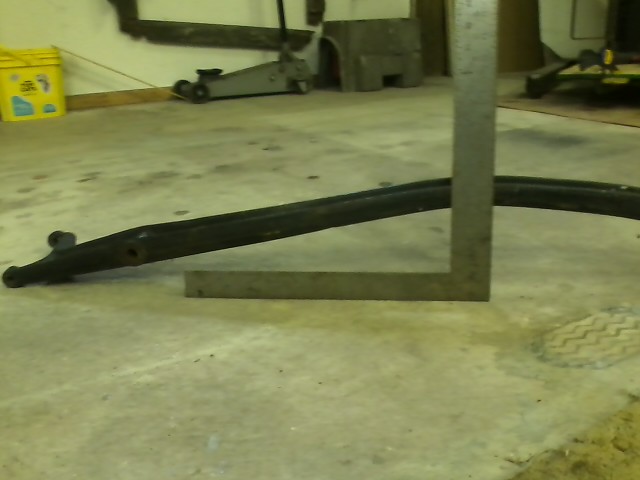 Don B, That is exactly the point! The force was balanced and equal enough that the wishbone held rather than bending itself. It then transferred all that force into the pan.
That is one of the most incredibly bent axles I have ever seen! Just the perfection of force required to result in that bend boggles the mind!

When working on beat up old cars, and parts, we see a lot of model T front axles bent forward. Whether it is still under the car or not, we know it is bent forward based upon the positioning of spring perches or spindles. Many people over the years have commented on their belief that axles were bent forward by tying tow ropes into the center of the axle and pulling the car. While I accept that may be the case sometimes. I personally have believed for a long time that most axles bent that way were the result of "square on" collisions.

What I find amazing is how strong the pan must be. Yes, I get that it's probably bent but when you figure that it's really just sheet metal I would have thought the wishbone ball would get pushed right through it long before there was enough force to bend an axle like that.

I haven't got my face close enough to the ball mount yet. It needs to be cleaned before I will know if there is damage. I can tell you there is no apparent damage and its square on the pan. But, further investigation is coming.. My mentor and friend Denny Newman has straightened many axles. We just rebuilt the entire front end on my centerdoor less than 2 weeks ago. I was amazed at how easily the axles will bend without any signs of stress cracks before or after. I'm curious as to whether Ford may have designed them that way or did they use a special metal mixture to make them somewhat soft ?

Don: In one of Ford's adverts a front axle is shown bent cold in a knot, testimony to
Fords superior quality materials. That was an earlier 'vanadium' axle, but the later versions were likely just as tough. best, jb

Wayne
Not to Hijack this thread but please tell me more regarding a No2 pencil supporting 500#. I do occasional beam sizing, have heard this before and never found any documentation.
Jonathan Crane PE

Jon C, Well, I never got "the degree" in anything. The more I learn, the more I am proud of that fact. I never got along well with people that thought they knew it all on my quest to learn it all, hence professors and I often argued, and they hated it when I proved them wrong. (That is a joke, son, I say THAT is a joke!) (Well a little bit.) However, many years ago, in one of the many courses I did take, that pencil thing was mentioned. It is a point used to illustrate the need for proper engineering, and the difference between the perception of strength and the actual practical uses and/or needs of it. The perception is that a pencil cannot be very strong? Can it? After all, I can snap a pencil into two splintered pieces in one fist.
I have run into that point a few times over the years in working with engineers, and once got to see a video of a demonstration of it. Interesting. It must be "out there" somewhere? Maybe on U-tube? I saw it about 40 years ago. As I recall, levers were used to hold the weight perfectly steady, and straight (so that the pencil could not suffer any twisting motions). A standard number two pencil eraser removed, and not sharpened, was carefully placed straight upright under the weight platform. Slightly more than 500 pounds (about 515 pounds if memory serves me still) was carefully placed on the pad. It held till the film stopped a couple minutes later. Weight was read out by an industrial scale.

Just one of those curious little tidbits one can run into in life.