I probably need an old sailor's help on my latest problem. I've pretty much figured out how to assemble a fairly period correct top for my Maxwell but have hit a snag on the back. The sides worked out great but the ends of the sides when rolled up on the back need to be pulled together tightly and the excess rope needs to be stowed out of the way.
Anyone have any ideas on how to do it neatly with some type knot I can learn to tie? Knot names would help so I can look up how to tie it. 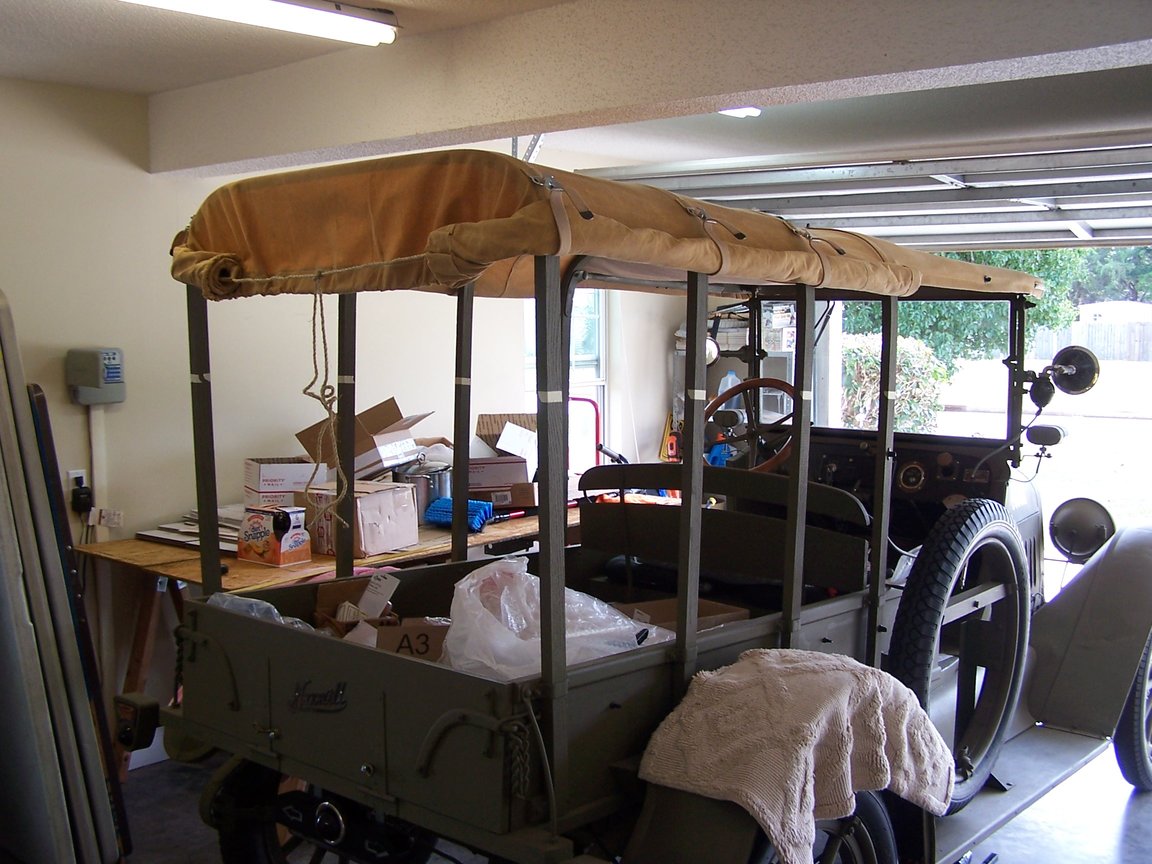 Loop the ropes around to the front of the rear posts and tie up with a "trucker's hitch"? Sometimes also referred to as a "farmer's" hitch.

It is one of the best "tie down" knots of all, usually used to pull tight and hold loads so that they won't shift. However, with an extra twist in the right place, it will generally hold a loose load as well. One nice thing for this application, the minimum rope needed to make a trucker's hitch is nearly two feet of rope. It would use up about half that excess real quick.

A Bowline knot is another good one that might work. It is the one knot few people are familiar with that everyone should learn. A bowline is the number one life saving knot.
I wish I was close by. The trucker's hitch really needs to be demonstrated in person.

Thanks Guys, I'll see if I can find out how to tie these. Really makes me wish Dad, an old trucker, had taken the time to teach me how to do it. I remember how fast he could cinch down a load and how it seemed as if with just the slightest tug he could almost crush whatever he was tying down.

Wayne, is a "trucker's hitch" maybe the same as a "timber hitch" ? Dan, far as I ever knew, a "sheep shank" is used to shorten a rope, the one I learned is not a hitch or a fastening knot. Many knots are known by several names.

Any more, I need directions and diagrams to tie more than a couple of knots I use often. I'd be lost without the bowline! Want a challenge ? Look up the "jug sling" with the "fiador" knot . . . "knot" that it's any help to Howard. (Nice Maxwell !)

Trucker's hitch is a great knot and I use it a lot to tie down loads. I use a bowline to form the loop because it is easy to untie. For added tension I use a double trucker's hitch.

I have the "The Complete Rigger's Apprentice: Tools and Techniques for Modern and Traditional Rigging" by Brion Toss. It is oriented towards sail boats but has lots of good knots in it. Well written with some humor thrown in.

I know a guy that's looking for a pair of headlights like those.
I think he has a 1919 Maxwell truck.

Dane H, I have never really used the sheepshank. It was taught to me a long time ago, just never really needed it. There are some similarities between it and the truckers hitch, but not the same thing.

Many knots are known by different names. It can get confusing when working with a group of people from different backgrounds. Sailors, boy scouts, teamsters and farmers. All use knots a lot, however they may have been taught slightly different details (length of loops etc). And sometimes, they learned different names for them. I was helping a small group with a project years ago, and was showing someone the truckers hitch when a friend's dad walked over and exclaimed "Where did you learn to use a farmer's hitch?" He had been a farmer for about half his life and knew the knot well (by the different name). Since then, I have met a few others that knew the knot by the farmer's name. I have met dozens of truckers (teamsters?) that used it as a trucker's hitch. That was also years ago. Today? I doubt most "truckers" could tie a knot to save their life.