What is the best way to remove rust from cast iron without destroying it in the process? Jim Patrick

Jim, molasses works well on steel and cast iron. However, you do need to watch cast iron or it will also etch impurities out of the cast. Sounds like your muriatic acid, but a slower, more controllable process.
The feed grade molasses I use is mixed at 40% with water. Warmth helps the process. the parts will need treating/painting immediately they are dry.

Hope this helps,
Allan from down under.

The only process that I have found effective is abrasive blasting,I use a blast booth and glass bead abrasive.

Wire brush on a cordless drill:

Depending on size and shape, sand blast or electrolisis is what I do.

I used to wire brush the rust off of parts, but once I got an air compressor and a blasting cabinet I found that blasting did a quicker and more thorough job. I have always used aluminum oxide media, but do a search on "blasting media mtfca" and you will find plenty of threads with other recommendations.

To me depends on the part, media blasting, esp. sand, can stick in places and be hard to remove.

For this T jack, cast and steel, found that a 4 day dip in 40% water/molasses did the trick. Sand blasting that screw and gear and hollow crevices in the body is a lot more work 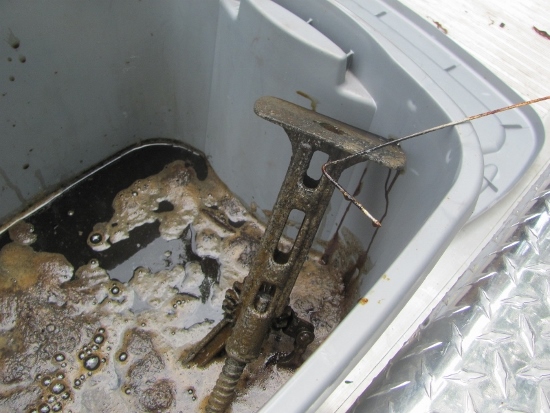 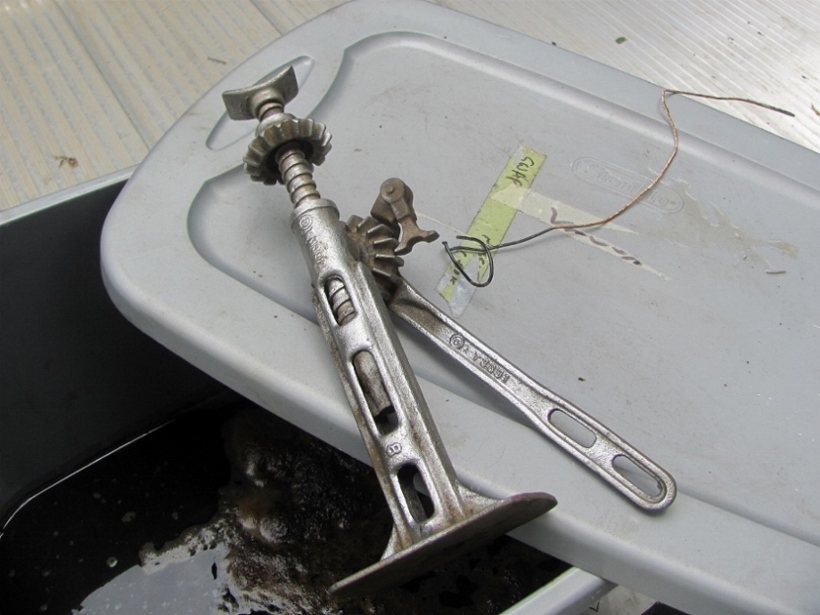 What kind of molasses did you use and where did you get it. Also does the part begin to rust quickly?
Thanks

What is ‘feed grade’ molasses?
Where can I get some.
I am rebuilding a 302 V8 and the intake manifold has rust inside the runners.
I would say dunking it in mole asses would be the best way to clean it out.
Mix in water and get it out as soon as the rust is gone.

Abrasive blasting works well on all but the lightest sheet metal, as the media tends to heat/warp the surface. It CAN be done at an angle, but takes much longer. The only drawback to abrasive blasting is that you must be sure to remove ALL the blasting media. Nothing like a half cup of sand in your engine to ruin your weekend.

Cast iron can be sandblasted without any problem, however since I discovered the joys of electrolysis I only use it on object too big for a tank....such as this pan. Electrolysis only requires a plastic vessel, washing soda (not baking soda) a sacrificial anode (junk sheet metal) and a battery charger. Hook it up, walk away. That's it. ALWAYS hook the negative lead to the object being derusted...think "negative, remove rust". Hooking up the positive lead will remove metal, leaving pits. Leaving it in the solution for "too long" doesn't hurt a thing since it stops working once the rust is removed. There's tons of info available on the net. Pick the simplest setup and try it on a small part. Oh, it will loosen bolts that are frozen with rust too.

I've tried molasses also, but it takes longer and draws flies like you wouldn't believe.

Here in Minnesota, I buy feed grade molasses at Mills Fleet Farm - hunters use it to attract deer:

In your area, you can probably get it at a farm store or any place that caters to livestock owners or hunters.

Seems like there was a guy that posted on the forum some pictures on the forum of a place that used large vats of the molasses mix to derust large body parts and etc. Haven't seen any info about it since.