Noticed last weekend that the T crept forward slightly after starting. I assume it's normal, the temp was in the 40's. I have 10W-30 as my oil of choice

There are several T creeps in our park on Swap Meet weekend.

It is normal for the T to move forward if the parking brake is not adjusted tight enough. I always block the front wheel. It only takes a few seconds for it to warm up enough to stop creeping.
Rich

John, I see that you have had a T for at least a few years. Haven’t you noticed this creeping in cold weather in past years or have you only driven it in the warmer seasons? Just curious.

This phenomena inspired cartoons back in the T era. Adjusting for a free neutral can help but in cold weather I jack up the rear wheel and put the car in high to start. Please block the front wheel for safety if you do this. 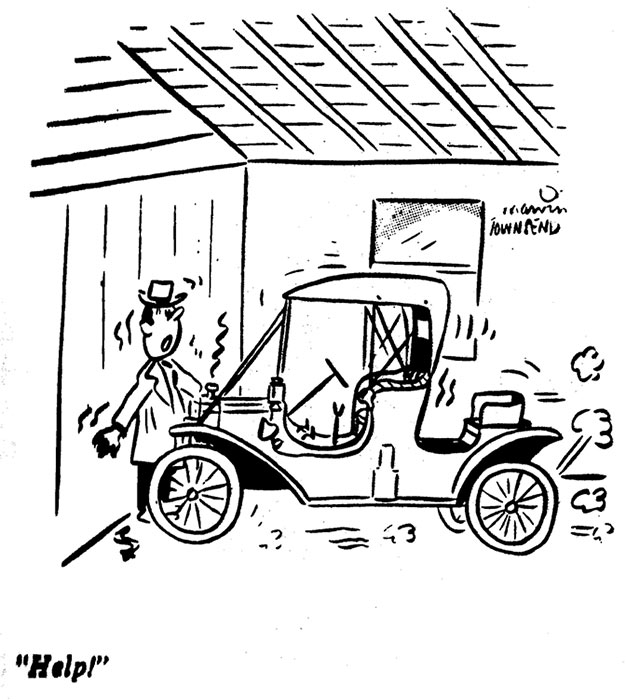 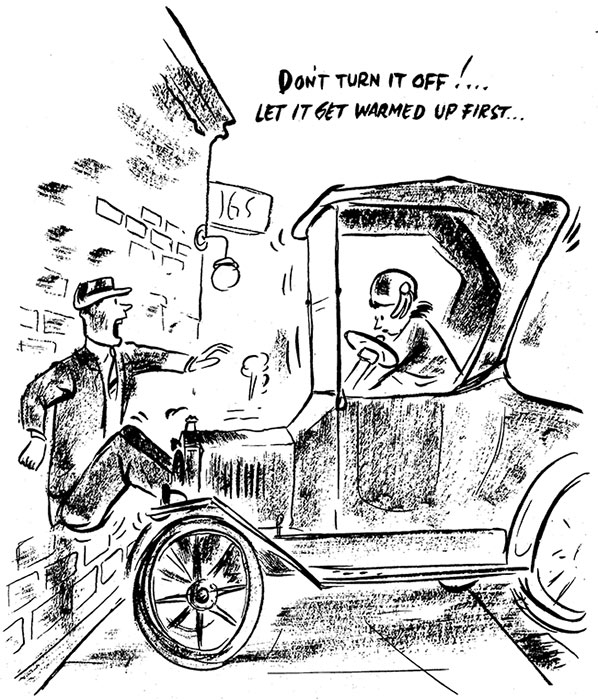 Mark, no worries. I have had it for a while and know enough to be dangerous. Been driving it more often and later in the year. As kids have gotten married and moved I have more time to play with the T.

That's funny. They do it when it's warm too!

My T really creeps with 30W oil in cool weather, not so much with 10-30. Suggestion, release the parking brake so the oil is squeezed out from between the clutch disks will help. Even with a properly adjusted clutch they can still creep. Having a good parking brake also helps.

My garage was built in 1919. The only easy way to park my T in there and be able to come out the passenger door is to drive in the garage front first. I have a couple of hard rubber chocks bolted onto a long 2x4 that I place on the floor of the garage where I want to stop the car. After I turn off the engine I always I put the high gear lever all the way forward. This way most of the oil is squeezed from between the clutch discs making cranking easier when I go to start the car in the morning. I can start it in the single digits here in the winter .. and the chocks are insurance that I won’t drive through the back of my garage.

Mark is correct.
When I park for any extended period, I release the park brake.
It also helps when starting, as the clutch doesn't drag as much.
So you don't have to jack up the wheel...

You might try 5W-30. That is what I use and find mine fairly easy to crank even in the winter. I also do as said above and park it with the hand brake forward when it's in my shop. Of course I don't do that in a parking lot, but when I'm parking it in the shop for overnight or longer, I do. I have some little parking pad deals that have two slight humps in them in that you lay on the floor of your shop or garage. They are intended to mark your parking position so you get in the same place every time. You just drive over the first hump and your wheel is then positioned between the two. If my parking brake isn't holding tight enough, it might creep up against the second hump, but usually not.

While it is nice to have a good "neutral", there is one advantage to a bit of "creep" that nobody ever seems to talk about. During the usual "stop-and-go" driving duriing a parade, a bit of "thinking ahead" will allow you to use "creep" to real advantage and thus be very, very easy on the low band,......FWIW,.....harold

Wandering off-topic, thanks, Rich E., for posting those cartoons. I recall both of those being included in Floyd Clymer's enjoyable books about the Model T. I think Clymer commissioned Marvin Townsend to produce a series of Model T cartoons for his books. Townsend was a prominent cartoonist whose gags were regularly seen in popular magazines from the 1940's through the 70's. His bio notes he was born in 1915, there's no date of his passing . . . perhaps he's still with us at age 103 ?

A thread with model T cartoons would be a lot of fun to see, and Rich Eagle's would certainly be among the best. I'm willing to bet he has done far more Model T cartoons than Townsend ever did !

I would avoid the park if creeps are present. You wouldn't want them to corrupt your innocent T.

A long time past, I had a 1926 Coupe that I parked under a shed one bitterly cold night. It would not even click the next morning, so I got in front to crank it. It had a bumper which saved me. As luck would have it, it started right up, and pushed me into the outside wall between the bumper and wall. I had too much throttle, and could not get loose, and it finally dawned on me to pull out the choke there in front and kill it before it killed me. A long time ago, but it sure taught me a lesson.

Grady, episodes like yours is the biggest reason that many unrestored (and some restored) T’s have both front fenders bent in. Jim Patrick

My grandmother used to tell a tale on my grandfather about running over himself with a Model T. I'm pretty sure she said he started it in gear, but now that I am familiar with them, I suspect it was only a bit of creep.

I can't imagine ever starting one in high gear. I've inadvertently tried, but the crank comes to abrupt halt when you make that mistake. I seriously doubt you could ever accidentally start the engine with the hand crank with the thing in high.

Hal, back then, men did the driving and chances are, your Grandpa probably forbade you Grandma from driving the T, for her own safety and possibly because if it was a non-starter T, she probably couldn't start it anyway, so it is understandable that she didn’t understand that the Model T could not be started in gear. It was probably after newer, safer, more female friendly, key start models, such as the Model A came out, that your Grandpa taught her how to drive and in explaining what happened to your Grandpa, being run over by the T, she explained it in a way she understood. Jim Patrick

An old-timer back in the 60s told me you just crank the car and jump in as it goes by. What's the problem?
?O)
Rich

I have cranked a T in high (ignition off) to move it. Like Rich E. and that old timer, I don't see a problem !! LOL

If it fired off in gear, I wouldn't think it would have enough power to start and stay running in high, even without a human speed bump !