At functions where we often display our Model T's, I find it amusing to overhear some old "know-it-all" Model T "expert", trying to impress his friends or family about something he knows absolutely nothing about! You know the ones I'm talking about,...like Grandpa, telling little grandson about the little toothed wheel just inside the front wheel that's "part of the front wheel drive system"!

Common courtesy dictates restraint in correcting the old guy and embarrassing him in front of the little grandson, but you'd sure like to take the guy aside and tell him something like,....." you know, you really have no idea what you're talking about, because that little toothed wheel is part of the speedometer drive system, and also, what you told your little grandson about why "you could have any color as long as it's black" is really not true and makes no sense at all"!

Anyway, we've all heard some really ridiculous and comical "explanations" by these "experts", and I thought it might be fun to relate a collection of them here on the forum.

I've already related a couple of the common ones, but I'll start it off with one more that's one of my favorites:

"Henry Ford demanded some of his parts suppliers ship him parts in very specific sized crates so that he could easily use the wood from those crates as floorboards for new Model T's on his assembly line".

How about it guys,....what nonsense "theories" and Model T "facts" have you overheard from some of the "experts"?

"Those don't have water pumps so they circulate water by boiling like a tea kettle" Sort of, just not all the way to a rolling boil. I did have a guy explaining to his son (son in his mid-40's) about my Ruckstell axle which was surprising since most people are clueless to Model T's. Except I don't have a Ruckstell, just a regular 12 rivet rear end.

I had a couple older fellows come up my driveway asking all sorts of questions about my '26 that really made it seem like they knew what they were talking about. Then one said, "So it's a 1904, right?" and kind of threw that previous theory out the window.

Oh well, I take that sort of thing graciously as any discussion even if wrong is a sign of interest.

Yes, the speedometer drive comment is common ... I also get “and they had solid rubber tires” ... and “see that thing behind .. it’s a rumble seat” as they point at the turtle deck on my runabout.

Oh, and I like to give my own facts to others about my T:

-instead of a distributor and single spark coil it has a coil for each cylinder like a modern car except instead of a computer triggering the coils when it senses the cam position, it uses a mechanical system driven by the cam.

-the transmission is a lot like an automatic transmission inside except instead of sensors engaging gears with hydraulics, you're the sensor and your foot does the shifting.

-it has a sort of dual-clutch gearbox, like the most expensive supercars do.

Why do you have a Rain Gauge on your car

You never used to be older. 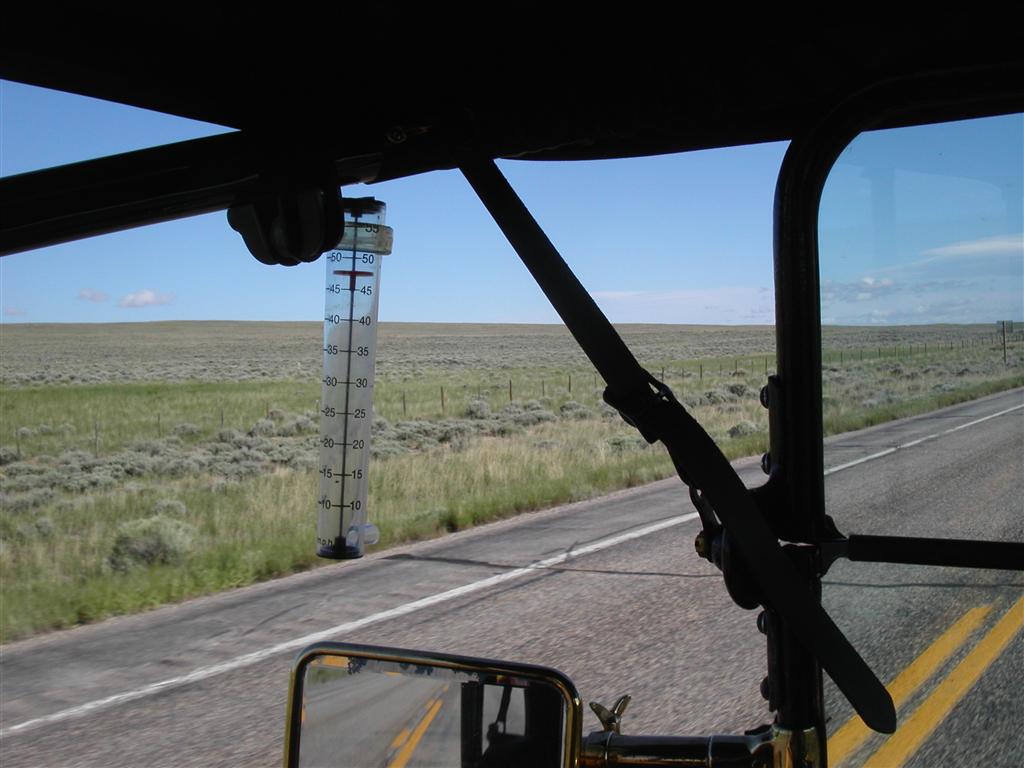 First thing that comes to mind is people assume they are worth way more than they are.

Well, you guys made me think of another one that really tickles me, as I've heard something similar, several times,......

"WOW,....my Great Grandpa had one just exactly like that! EXACTLY! I think it was a Plymouth!"

Are you the original owner?

And here's another favorite of mine,.....happened at a "cruise-in".

A young couple were walking around, looking at all the cars.

"Oh, for the first kid, we bought one of those fancy and expensive baby seats, but for this second kid, we just throw him inside there on the running board, and he just loves it! Saves us a lot of money too!"

Harold, yes. Often enough that I sometimes say it to fellow club members as a joke.

I think I mentioned my friend who found an exhaust whistle in an antique store and asked the lady how much it was.
"For that candle mold?' she asked.
I found 3 taillight brackets hooked together and was told it was a cloths hanger.

Terry-
Would you be kind enough to explain to my wife that you've had the same comment? After some 20-something girl asked her if "she was the original owner?", I've had far less support from my wife for the hobby and she won't go to car shows with me anymore!

Are you saying your wife is 100 years old, Bob ?
That could make for a few cold nights sleeping in the back seat of the T !! lol

I like to remind the unsuspecting know-it-alls that Henry Ford’s greatest contribution to the automotive industry, was the development of the triangle wheel. A drastic improvement over the square wheel, as it reduced the number of bumps in the road by 25%! He was a true genius! ;)

I didn't know that Kevin. Thank you

Yea, similar to the dad telling his son my Fairbanks Morse hit and miss engine had gas in that big hopper on top with no lid on it~!

The dumbest thing i ever heard was from another T owner. I was at a car show once and the only other T there was next to mine. The guy told a spectator that his distributor was factory original and he didn't know what kind of crap I had cobbled up on mine.

I bet he posts on the forum, too

Some people get misinformed on purpose. In 2010 my buddy Ray was with us on an international tour. Ray knows the history and the story of our T and at one of the stops I was standing back a ways and let Ray brag about our 1914 to a bunch of people. He said to them that this T has bean in the same family for a 125 years, then looks over at me with a smirk on his face. I just shake my head and walk away.

Will C. that kit car bit is more common than you think. I've had it twice. Once by a nephew how knew I had actually built a Frazier Nash kit car about 30 years ago.

Silly questions asked? Im at the gas station filling the fuel tank, and more than once have been asked " Does it still run"?

Last time I was at a gas station fueling up I was asked how I got it there. I laughed so hard I couldn't breath.

I often hear the one that, Henry Ford invented the assembly line.

As to the original post. The crate-to-floorboard story is baloney, but the crate-to-Kingsford charcoal is not.

Know this is more like the forum that I like.Every one having fun.Great!!!

Where do you buy the charcoal to keep that thing running?
Is that a 32 ford?
You have to have everything machined for that car don't you?
That's an old Army truck ain't it?

At a gas station I was asked if it ran on coal.

When the guy asked what the smell was the owner said "It's bacon" pointing to the manifold cooker.
"Hey Honey" the bystander said to his wife. "This thing runs on bacon!"

"Someone sure kept it nice all those years."
After a complete restoration.

The most common question I probably get is about the speedometer gear. I have a 1 of 4 1912 Maxwell so everyone thinks it's worth a fortune. I wish.

back firing instead of after firing and frost plugs instead of expansion plugs/cups or welch plugs.

My Maxwell is a right-hand drive so I've heard several people say it's from Europe. The name Mascotte sounds French so it probably leads to that.
I've also heard people say all kinds of things about the headlights and tank. The funniest was probably "It has a nitrous tank on the running board.".

My favorite is "Look how easy it is to work on"

You want the worst? It's getting BSed by a T guy after you walk up & are looking over a car. Happened recently at the working farm gathering here in N.J. Handed some c**p and when he got the right info tossed back at him he turned t his next victim.

"The factory Ford clutch is Junk"

Ed, I agree with you.

"The factory Ford clutch is Junk" - good one Ed.

The perpetuation of myths is a problem for this hobby and unfortunately a climate now exists where it has become difficult to challenge mythological opinions.

Nevertheless, folks involved in this hobby should work together to educate the newcomers.

The car is over 100 years and the design of the planetary gear/clutch a bit older.

As for the education of new comers... water pump is a good accessory to have on the car. Most importantly it is visible and will generate much discussion.

George, and it works well as a wheel chock.

The motors came in crates that had holes cut in specific areas and the crates were used for the floor boards when the engine was removed. Do those wood spokes have a steel rod going up the middle for support?

Yes there is truth in that Thomas.

I remember many a time I would park on a hill, drain the cooling or what was left, remove the fan belt hoses, and water-pump. Place the water pump under one or the other wheel to prevent the car from drifting down hill. Return and replace the water pump to go on my way.

And sometimes, I would not even need to crank the starter or turn the funny handle hanging of the front of the car...just by turning the ignition key I would get a "free" start.

"Tim Rogers-The perpetuation of myths is a problem for this hobby and unfortunately a climate now exists where it has become difficult to challenge mythological opinions.

I gave up on trying to correct people and choose to enjoy the fact that they are enjoying seeing the old cars. We do what we can and some folks do enjoy hearing about them. Others are in their own worlds and can be beyond help.
Nice comments here.
Rich

I had a real model T guy ask me about my Voltage Regulator. He said he didn't want one on his car because it was not authentic. I told him I fully understood what he meant but that I did make the VR using authentic 1925 Germanium transistors so as to keep it as "period correct" as I could. He accepted my explanation and was walking away and then stopped and looked back at me and I was having a hard time holding in my urge to giggle. He laughed and was not offended at my BS story. I told him further that I did work at Bell Telephone Labs where the transistor was invented and he didn't believe me but that part was true - go figure.

We both had a good laugh and he is a friend in my chapter now.

"Does it drive?"
"I hope so! Otherwise I don't know how to get home!