My clutch lugs are badly worn. What ever sort of clutch plates I decide to use I have to do something about them.
The MTFCA manual suggests that one way is "to machine the lugs until they are the same size as the 1925-27 lugs (it does not say what size these are) then use the steel shoes."
"If the grooves are no more than 3/32-inch deep on either side of the lugs, they can be removed with a 3/8" square file (in two hours)"
I have tried filing but, as it is blind, it will take me far longer than two hours!
It also says that a sound 1925-27 brake drum could be used with steel lug shoes. The 1926-27 ones would need machining in a lathe as they are wider. (Again, it does not say by how much.) It also mention other changes that are required.
As a new brake drum would cost $845 plus postage to the UK, I am wondering what is the best way forward.
Colin. UK.

You machine the excess width off from the back, until it is as wide as the old drum (actually you don't even have to make it the same...just remove enough to clear the pan...and in many instances you don't have to do any machining to clear the pan...you'd just use a portion of the surface where the band covers it).

You would have to also find a '26-27 tailshaft to fit the drum...earlier tail shafts don't fit later drums.

I think this could be a real money saver if you do this.

Anyone know if the lug shoes for the improved brake drum are available ?

How about using these

It's not advisable to machine down the lugs in the old style drums all the way until you can mount the '26/'27 lug shoes - they'll be very weak since there's a threaded hole in each lug.
New narrow drums are available and they are made for lug shoes from start. I think you may have to use 26/27 style large clutch discs, though?

If you find a good used '26/'27 brake drum and a fitting drive plate, then there's no need to cut it down - it'll fit a 1920-'24 three dip pan fine and certainly any '25-'27 four dip pan. Most likely earlier pans too, since the design of the earlier drive plate has bosses for the clutch fingers that are rotating in the same area as the wider '26/'27 brake drum. A narrow brake band will just use the forward part of the drum and it'll work just fine.

Though you can't use the '26/'27 style hogshead with a wide brake band if you have an older pan than the '25 - '27 four dip version that has enough room for the wide brake band.

What keeps the brake drum shoe it in place?
I like the idea.

Agree with Scott. The 26-27 set up is superior to the earlier type because the tail shaft is captured inside the drum as opposed to held in place with a small lip.
I don't like the idea of trying to file the rough edges because it is darn near impossible to do so where the tabs on the clutch discs hit all the lugs at the same time resulting in grooving on the ones that make the first contact. Seems you're back in the same shape as you were originally.
If you are considering filing the lugs to accept the later shoes, you must have the type of brake drum where the lugs do not have the bolt holes. You still have the problem of machining them down to where the clutch discs make contact uniformly with the shoes.
Re availability of the shoes, Chaffin was making them a while back. Is he out of them?

They are a press fit on the lug and once the discs are in place, they are essentially captured in place.

You only need to turn the edge off enough to hold the drive plate captive. The nice thing about doing it this way, you don't have to use the special tall headed bolts and you can take advantage of the full width of the brake band. (no you cant use the 26/27 band with pre 26/27 hogs head in this case)

Colin, you could call Don Lang and see if he has a good drum that he would be willing to sell you.

Thanks for your replies.
No one has noticed that I am in the UK. I will give Neil Tuckett a ring.
Colin

A friend with a '14 asked me to look at his car because a few chips of metal came out with the oil during an oil change. The pieces were fairly large but I could not identify a source as none of the pieces looked like anything in a '14. That night while I was lying in bed it occurred to me that the pieces looked like part of a lug shoe. Sure enough when we tore things down we found that someone had turned the lugs down to take lug shoes and one of them let go. I might add that all of the bolt holes in the brake drum were cracked and the hole where the lug shoe let go had a chunk missing. I guess I would never make that modification and consider the cost of a new drum or a good used one to be well worth the money. When you consider the damage that can be done and the time and effort involved in dealing with a brake drum failure it's a no brainer.

Yeah, Val, that's never a good practice to modify a drum to fit those shoes. Additionally, some time back, the repro shoes were small (too tight) and very hard/brittle. You may have encountered those as they sometimes broke.

As for me, I would probably file the lugs & install the after market shoes. But it would take me a very long time to get everything lined up to my satisfaction...

Has anyone ever fitted after market shoes to an early (1915) brake drum?
What is the width of the lug after filing? It is very difficult to file blind.
I was thinking of drilling holes to let the file through but that doesn't seem to be a very good idea as they would be close to the edge.

Colin, I would not consider doing that.

As Roger posted, just a little meat on the lugs near those bolt holes of the earlier trans. brake drum to allow machining down for the '26-'27 style steel shoes. 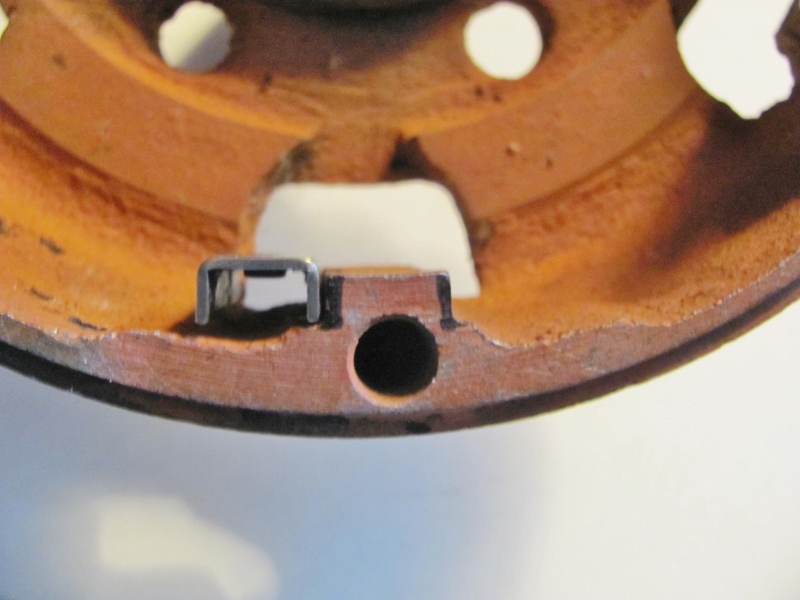 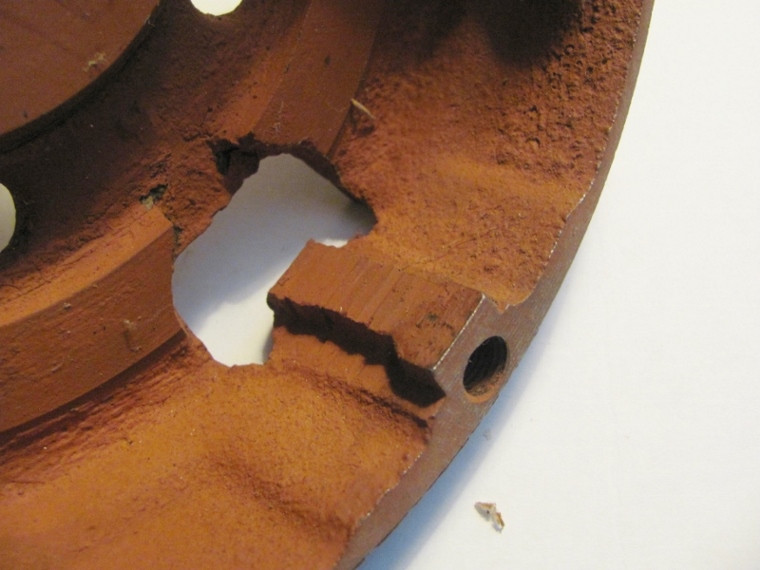 And with a lot of wear on the lugs, there may not be enough side profile to have the nice tight press fit and crimp needed to retain the steel shoe from rocking. 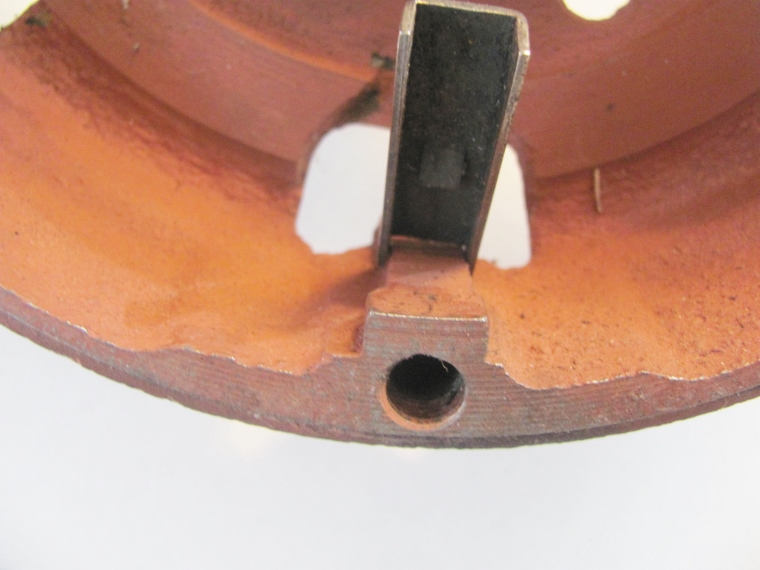 This particular lug is so worn the steel shoe wiggles already.

The '26-'27 p/n3011B trans drum is new design, where lugs and shoes are in different place, the bolt holes have their own boss. 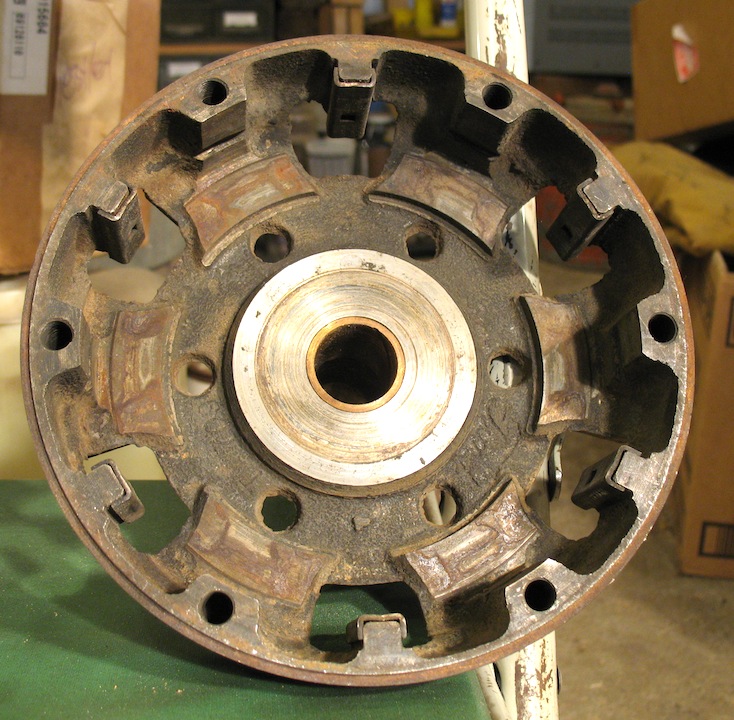 Even if you filed the lugs and got a nice fit for those caps, you most likely would never get the spacing correct from one lug to the next, such that all 6 lugs contacted the notches in the clutch plates evenly. A new or better drum is the way to go.