While on the way to Hershey our "new" old car showed up. It's a 1905 Ford Model F. According to Trent Boggess ledger data, it was sold new in April 1905 through Wannamakers of Philadelphia. 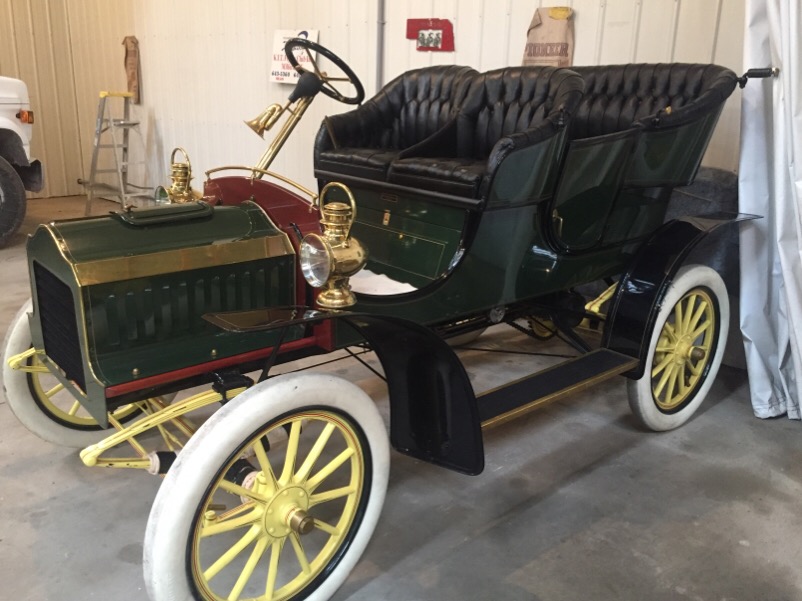 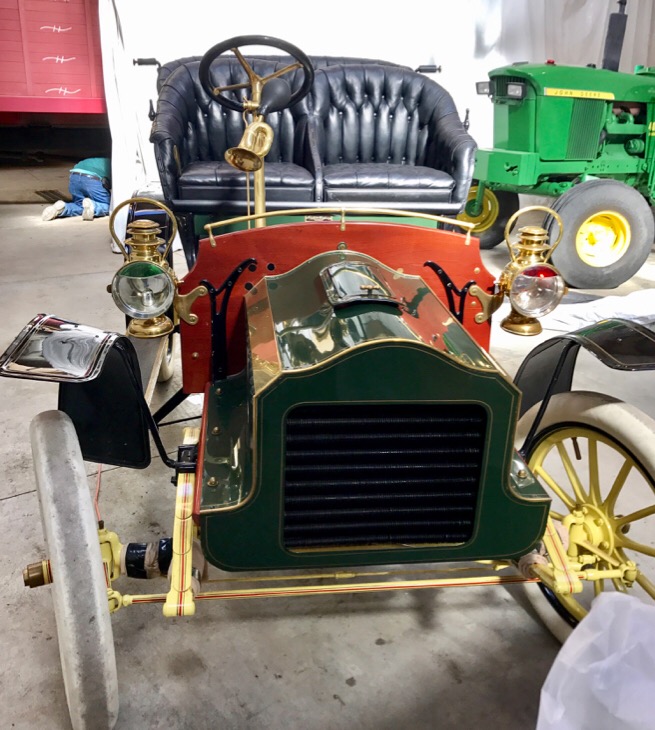 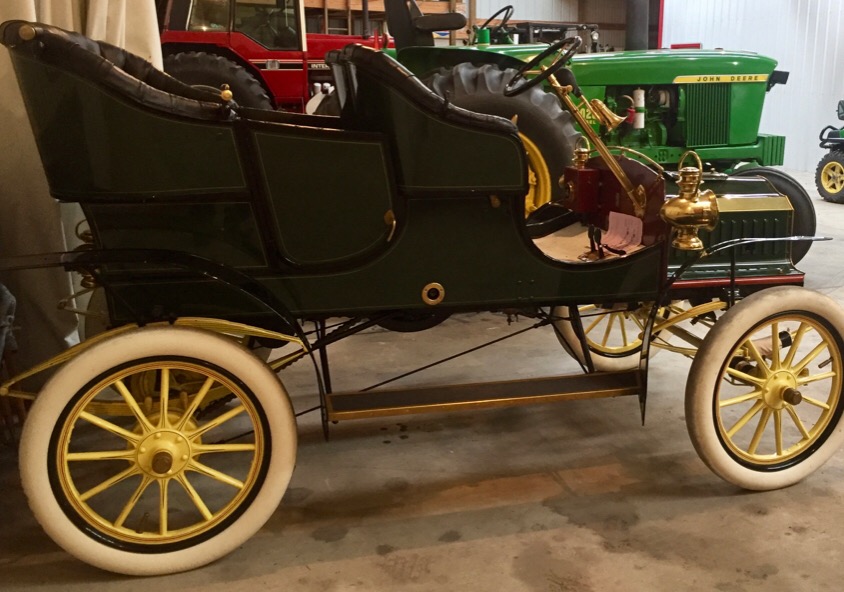 Rob,Congrats on your very early stable of Fords!! Bud.

A few pics of the engine and things when the car was a Piquette several years ago: 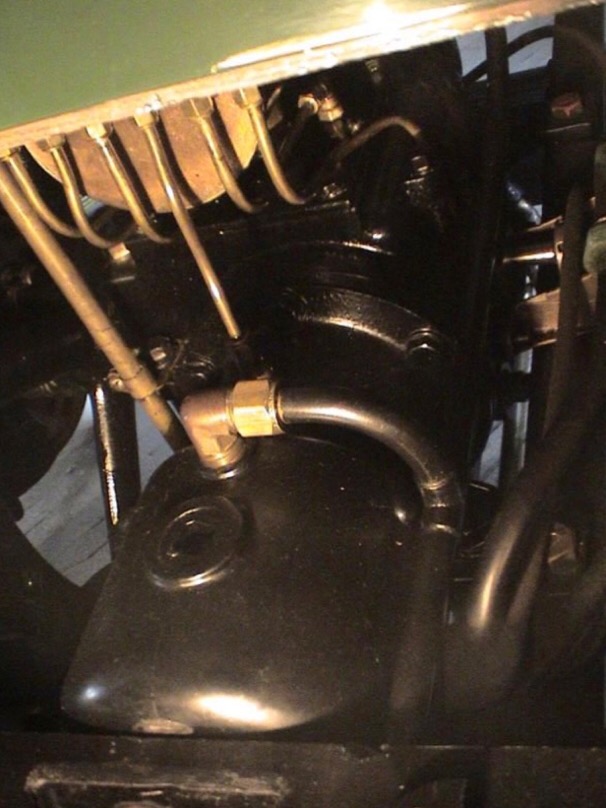 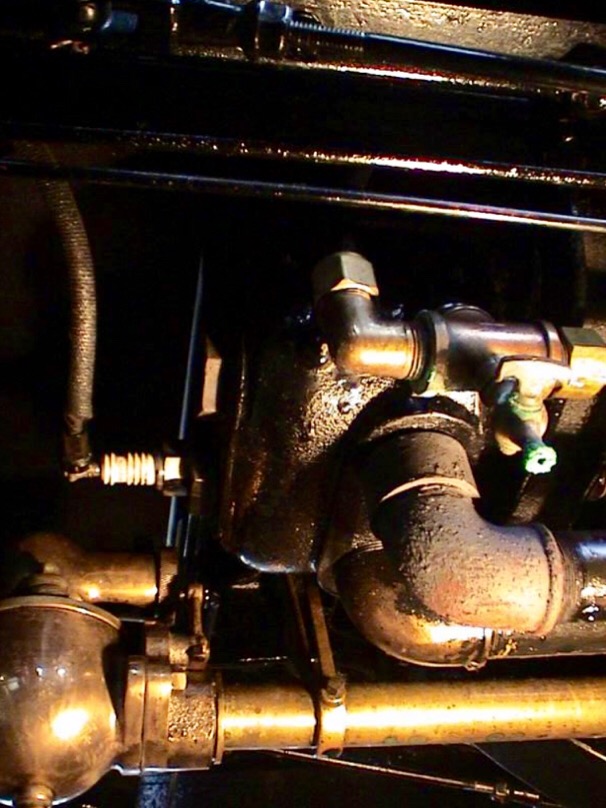 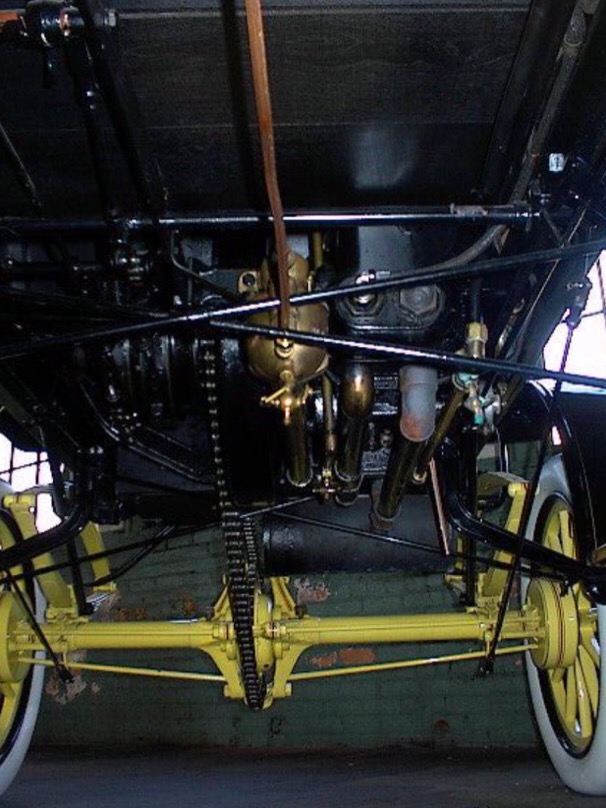 With the top on: 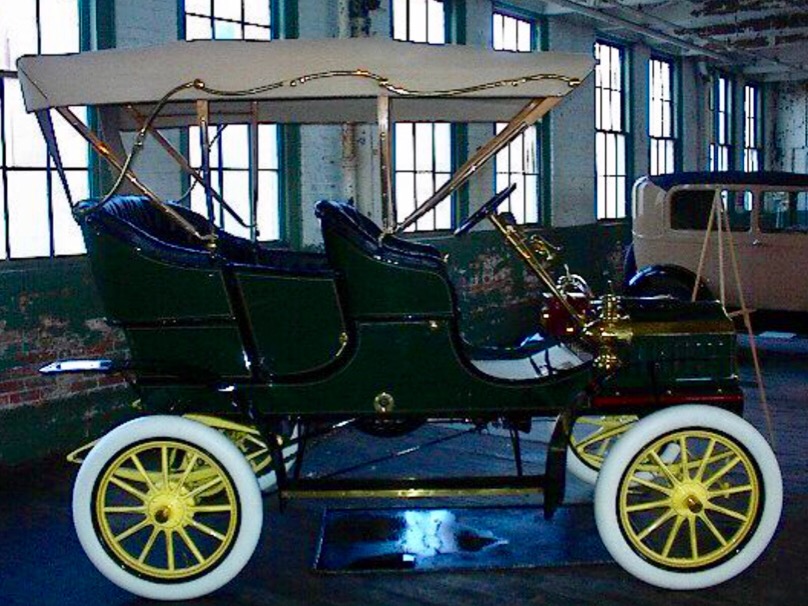 There is probably still room in that Quonset hut for another one. Maybe a Model A.

How did you happen to come across this one?
Congrats, by the way!

Wonderful! To say the least.
Congratulations.

Rob, I'm beginning to dislike you....

Don,
#2705. This F came from a California owner. Prior to that it was at Piquette for a time.

Willis,
Interestingly, I looked at buying this F in 2009. At the time we had several Ts and our Model N. As it turned out, a friend in CA bought it on a Phoenix winter auction and I later bought our first Model K.

Dave,
There is another project on the horizon...... And this one is Model T related.

You gotta love that.

Oh...not the car just the picture...I have a picture just like that.

Rob,Any chance it was the one in the picture with Henry and Edsel? Bud.

Absolutely AWESOME !
That color is sweeeeeeeeeeeet !

Thanks guys. Bud, odds are not. However, one never knows. This engine number was shipped to California. I don't know the history of this particular car, as to whether it is an original car or pieced together. Hopefully I'll learn more over time. 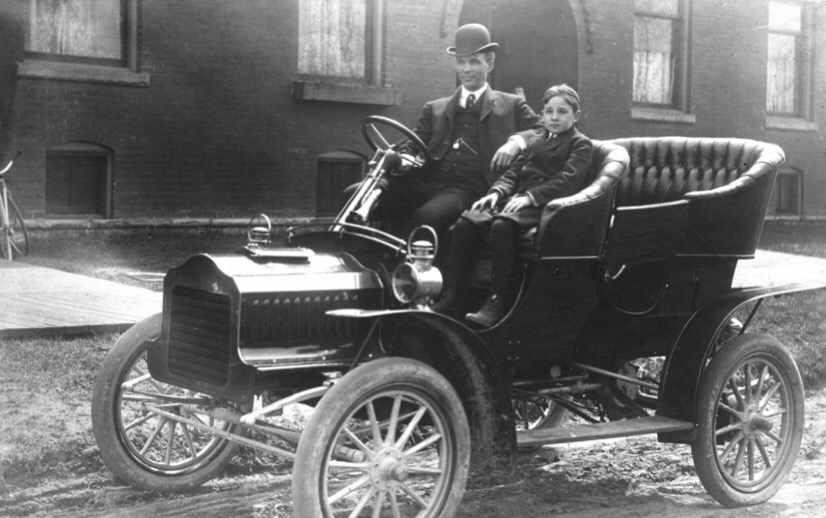 Our N #3 is more apt to have been ridden in, or at least touched by Henry Ford. This is the first N, and ours has some unique features such as the front axle to this one: 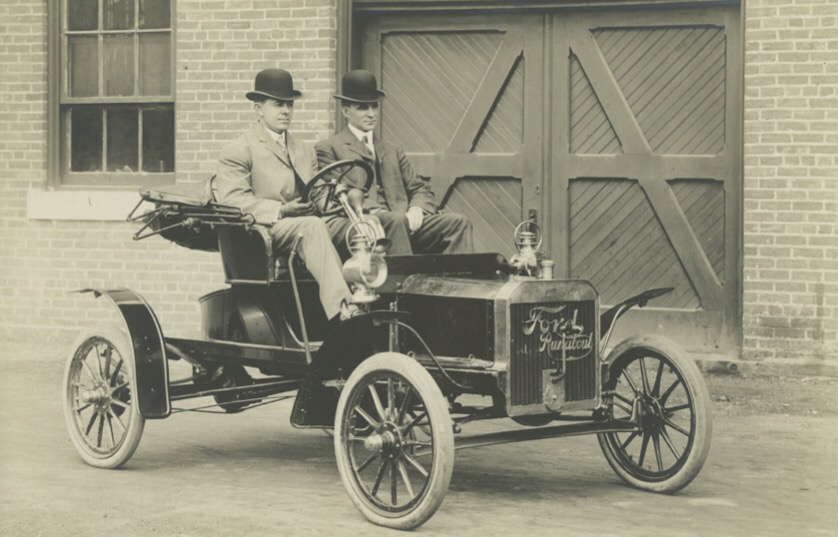 We know Henry and Edsel Ford rode in at least one Model K Roadster, after winning the Cleveland Stucky Hill hill climb in 1907: 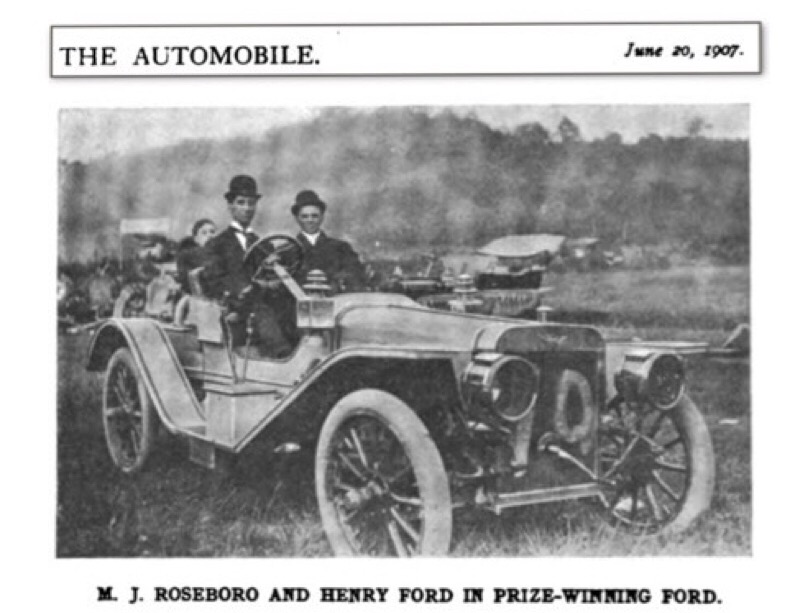 Rob, It seems like you're getting really close to having a complete collection of the early Ford letter cars. Congratulations on acquiring a really nice car!

Thanks Keith. That darn Model B would be the one that's about impossible to find, and afford. I've not had a car eligible for one and two cylinder tours before, and we're looking forward to taking it out.

Wonder what's the story on the red & green (port & starboard) running lights??? Do you suppose Henry thought that nautical navigation rules & regulations were eventually going to apply to road vehicles too?

Harold,
Both our N original lights and new F have the same red and green G&D side lamps with eye shades. I suspect it was an industry standard or feature at the time.

I'll look for a period add this evening.

The Vintage Ford Vol.5 No.6 had the most fantastic photo essay and story about a Model F back in 1970. It showed many details and the beauty of an original car. I was intensely bitten by the two-cylinder bug at that time and it has continued to plague me to this day.
What a wonderful car that is to add to your stable of fine Fords. The earlier Fords only add to our appreciation of the Model Ts.
Thanks for sharing these photos with us.
Rich

Rob, you are living the dream my friend. Your Pre T Fords are top drawer.

Is that the Bill Ortman car? If so, there should be a few members of the BAHCC that should still remember some history of the car. I didn't know Bill really well, but he was always interesting to talk to, and listen to. As I recall, it had some very interesting history.

I have been told by American's that stay at my Motel that with the economy the way it is that 80% are still doing it tuff, Rob you must be in the minority group!
Oh! by the way, very nice car to add to your collection. I am jealous.!!

I'm happy for you Rob! A generous and kind fella should have the toys he wishes for. You're that fella. :-)
That F should be great fun!

Looks like the car Richard Gould had for sale. I have an unrestored 1906 model F and I think they are the most ornate of early Fords.

Thank you for the kind comments.

Frank, I'm fortunate to be involved with a young woman who accepts and even embraces our hobby. Much different from the former administration. In other words, an enabler......

Wayne, I'm only aware of the last two owners. I anticipate learning more over time about this cars history.

Duey, i expect to see you next summer in MN for a ride.

Robert, yes, Richard's car. Back when he bought it in 2009, he and i spoke about the car, as i was already drooling over it. Richard has been a wonderful caretaker. My plan is to drive and tour with it, and Julie has taken quite a liking to it too.

I expected someone to mention that Model F aren't very fast for my tastes (quite different from the K Roadster), and had the following article ready to prove that a two cylinder Ford could win a race too: 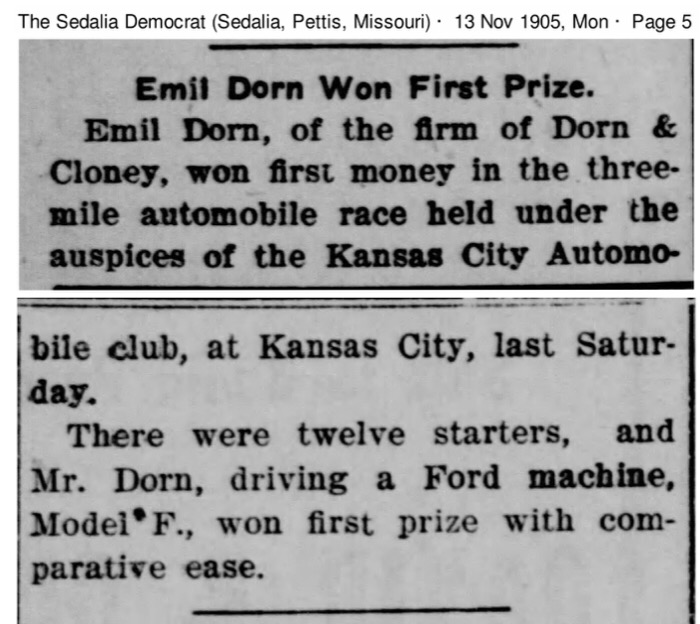 Rob. you need a track so you can practice setting records for the mile, 24 hour run, etc.

Haha! Don't tempt me Rob! Thank you.
Phooey. See you there!
Poor Edsel looks like a ball of twine even then...
Funny, I'm working on resurrecting a 21-32 FT Twin City. It's a good bit slower and worth a bunch of trifles less but it's production serial #2 so it's just as cool...to me. Haha! :-)
That F is a speed demon for '05! Uber cool!
Uhhh!!! Look at those "old" tractors in those pics!!! I had to look again and wipe the drool from my chin.
You don't use that old 4020 do you? I got lost after the 86 series but that IH looks awfully familiar. 1486? Nah. Big Chevrolet truck? Wonderful work and play machines and they are well-kept-gorgeous!
Back to the regular scheduled programming.

Rob, was the Schebler D that is on this car correct for the F? It must be one of the last Fords that used a Schebler carburetor as the NRS series all used Holley or Kingston I believe.

The D's are good carbs but hard to make idle smoothly and still accelerate well. An interesting modification was one I saw on the Jack Benny Maxwell carb I did last winter or winter before. Somewhere back in time someone had added an ingenious idle circuit with it's own adjustment to it.

I don't know much about the pre-T Fords, but I am in love with your F!!!

I recall helping work on this car when Richard first had it in California. It is a very neat car!

here is my unrestored ‘06

Stan and Robert, I don't know what carb was original to Model F. My guess is the Holley on Robert's is original.

Since I was gone when the F arrived, it was dropped at a neighbors. While I have a John Deere, mine is older, a 530 (last of the two cylinder Deere). We bought it new when I was four years old. My other remaining tractors are a 170 hp front wheel assist Allis and Case/IH loader tractor.

Dave, I've thought of a one mile track. However, our bottom ground where it would fit is low ground and there would be spots that would never dry enough. Not many flat one mile dirt tracks left in the U.S. any longer.

Notice the block Ford script on Robert's original F. I've seen that style of script on two other Ford's, both Model K. The one below was used by the Chicago Branch manager as a pilot car in a 1907 endurance run. The sacks on the car contain red confetti to drop at turns and intersections to mark the way for the cars on the run: 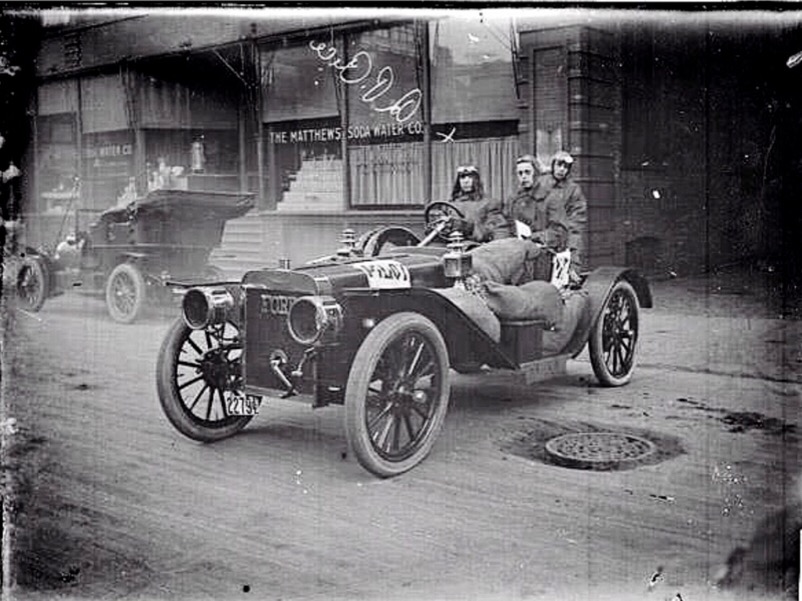 Stan mentioned acceleration and the Model D Schebler. The pipe from the carburetor to the T and then pipes to the cylinders are long enough to make some lag time from moving the throttle to the actual response of the engine. My 2-cyl Buick is similar. You have to think a second or two ahead or you have the engine racing or stalling. Perhaps the guillotine throttle doesn't help either. This while trying to shift, stop and drive in traffic take some getting used to. Just more fun.
Rich

You walrus, you. Don't ever let anyone restore your F please. He run good? Very nice car walrus! He's beautiful and keep me up to date if you would. :-)
Thank you and sorry all at the same time Rob. Those late two cylinder JD's were starting to run REALLY good. When a teen, working on a barn dad was building, The fella used his 730 on a manure spreader daily. Such sweet music. Some very good fuel economy results from the 30 series too.
Eh hem.

I'm wondering if that may be the same car once owned and restored by an old friend in Baltimore? Phil Schnering had one that he said was owned by Wanamakers. It was incomplete when he acquired it and he spent a life-time finding things for it. In the early 1970s he managed to locate a complete rear end assembly at the old Harah's swap meet. Phil passed away years ago and I never knew what became of the car other than hearing it may have gone out west someplace. I was in the Navy stationed overseas at the time so was unable to keep track of it. All before the wonders of the internet!
Terry

I'm in awe of the pre-T Ford letter cars.

Thanks for sharing it with us.