After owning a few early Fords, including two Model K, I've decided some (much) Ford history is questionable at best.

For those who immerse themselves in early Ford history, through the Model T era, Frank Kulick is one of the early employees who had a tremendous impact upon Ford history, and was a close personal friend of Henry Ford in the early days. Kulick was one of Ford Motor Company's first five employees, and became a world renowned race driver for Ford for years, making records and racking up victories between 1904 and 1912.

Photos of Kulick show a man who seemed impervious to danger, who rode Ford creations that stressed horsepower to weight ratio, with little to no regard for a body or safety system on the early racers.

One of the "myths" about Ford history, and Frank Kulick in particular, is the story about how Frank's association with Ford ended. "History" tells us that Harry Bennett lured Frank Kulick to listen to a car, riding on the fender, to determine a problem, as Bennett drove the car outside the plant. Supposedly, Bennett swung the car in a tight turn and threw Kulick from the fender, then driving inside the gate and ordering security not to let Kulick back in.

By 1927, when this supposedly occurred, Kulick was one of Henry Fords most trusted longtime employees. His racing days had long passed. However, he had been chosen to drive the 10,000,000th Ford across the country, and was still a well know and beloved figure nationally and within the Ford organization.

A few years ago, I had the opportunity to interview one of Frank Kulick's nephews. This nephew, and his brother, who i also spoke with, lovingly recalled "Uncle Frank." They told me about their uncle, and the stories he told them as young boys. As it turns out, their father, Franks brother, was somewhat a home message therapist or chiropractor. "Uncle Frank" would stop by the house, and the brothers watch as he removed his leg brace, and their father would massage his mangled leg.

Frank and their father told them of how Frank received the injury while attempting a world record in Detroit many years ago. They also told of how he recounted how Henry Ford had personally sawed the back of a Model K off, and found a nearby farmer with a matteress to make a gurney for the Model K to transport Uncle Frank to a Detroit hospital.

They also said their uncle blamed a Ford employee for over tightening a wire wheel for the cause of the accident. The employees last name, according to them, was "Sorensen."

Turns out, this desribes the accident Frank Kulick was involved when he attempted a world record with the 1100 cubic inch six cylinder racer in October, 1907. The wreck caused Henry Ford to briefly exit track racing.

However, following Ford's victory in the Ocean to Ocean race in 1909, Ford and Kulick resumed racing. Ford engineers created at least five "Special" Ford racers. While the racers appeared to be Model T chassis, under the hoods they were significantly different from a Model T, with pressurized oiling systems, water pumps, no internal magneto and Bosch high tension mag hidden in the engine compartment. These racers had displacements (that I've found to date) of from 192 to 410 cubic inches. And, these racers were world beaters, wracking up race and hill climb victories throughout the U.S. between 1910 and 1912.

Back to Frank Kulick. The nephews told me that Kulick was not fired, as the Bennett story indicates, but that he became angry with Henry Ford, Bennett and the way the organization was run, and quit. They told me Henry Ford attempted to patch up the relationship many times, but that their uncle was the kind of man who once he made his mind up, that was it. They also said every Christmas for several years, Ford would send a new Ford car to Kulick, and that each time, Uncle Frank would refuse the gift.

These articles I recently found seem to indicate Frank Kulick held no animosity toward Henry Ford. The third article also corroborates the idea that Frank Kulick quit on his own volition.

However, the story of being thrown off a fender as Harry Bennett speeds back into the plant, and security slams the gate shut is a sexier story....

In this 1946 article, Kulick mentions he still has "great affection" for Henry Ford: 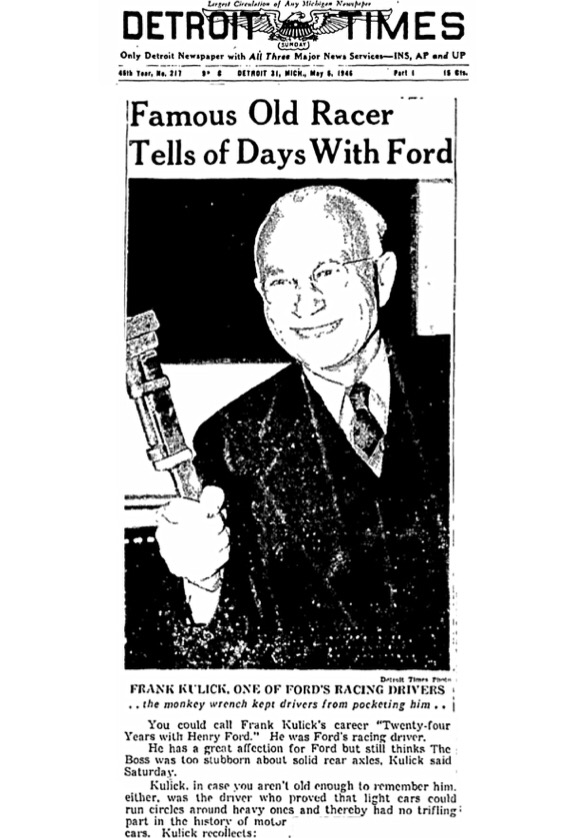 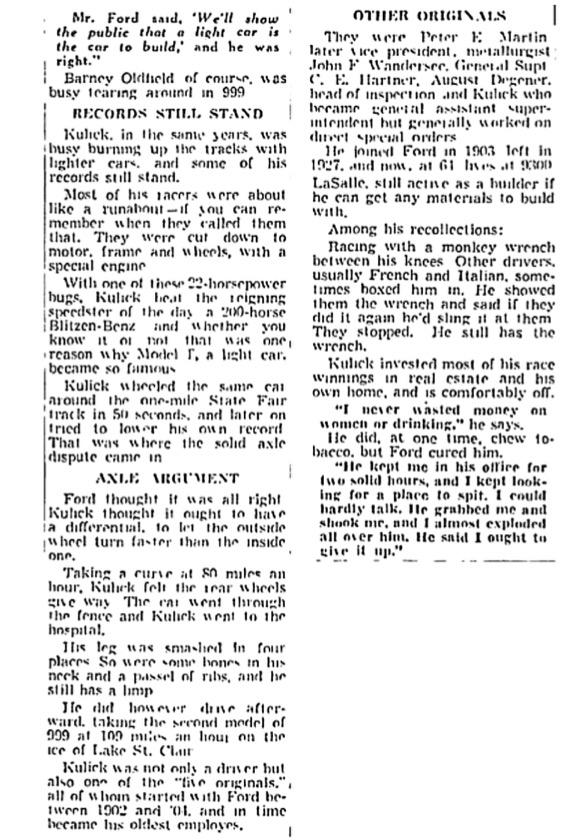 Kulick comments on the Model K, and other things during his tenure with FMC: 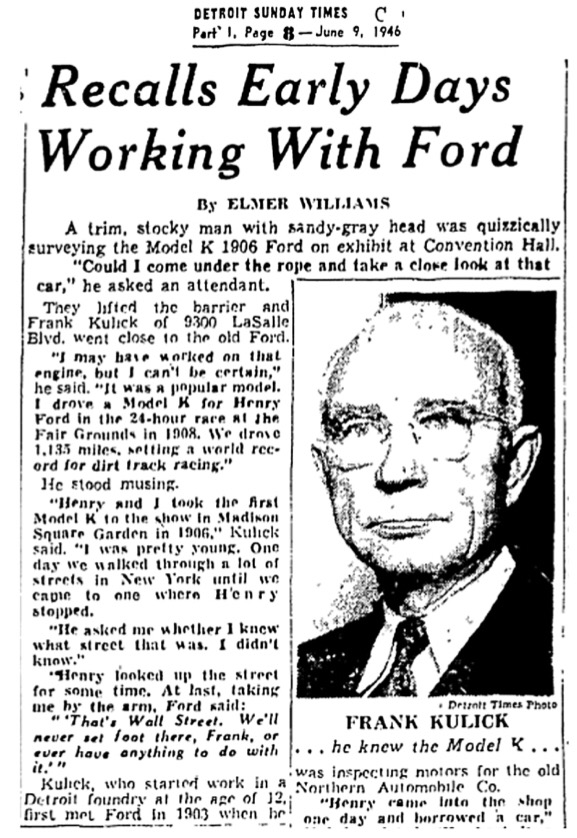 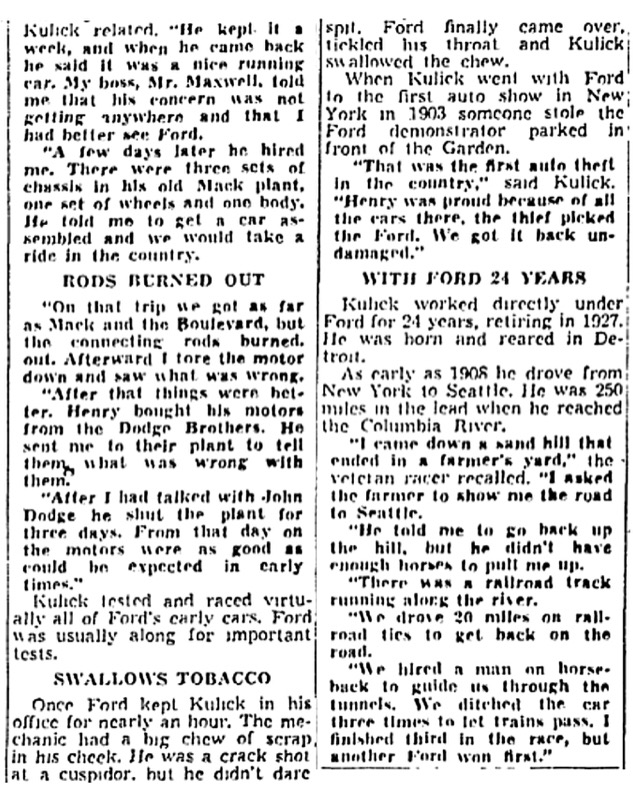 In this 1953 article, after Henry Ford has passed, Kulick discusses his time af Ford, and at the bottom right, why he left Ford Motor Company. 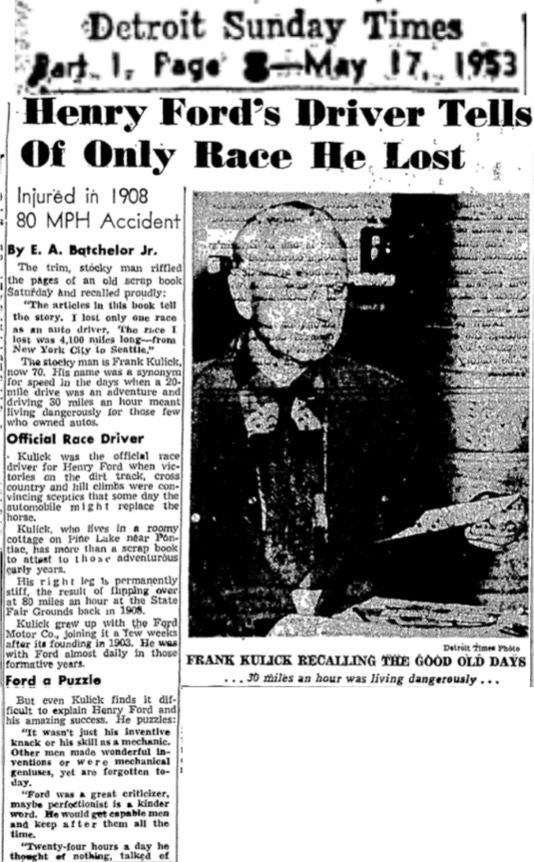 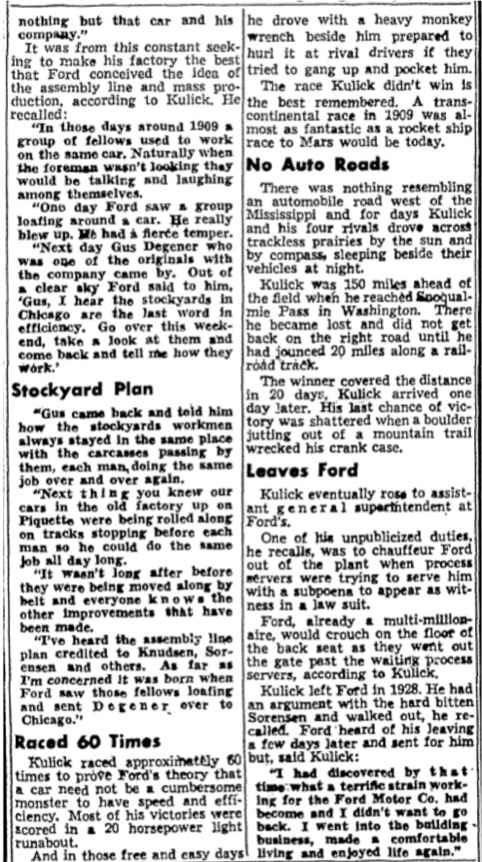 These article are difficult to read, and the resolution is less than ideal. However, all three are consistent, and depict a man who was an integral part of the early Ford history. As for which "history" do I believe. I think when Frank Kulick said something, that's the way it was.

After all, how can you not believe a guy willing to go over 100 mph in this? 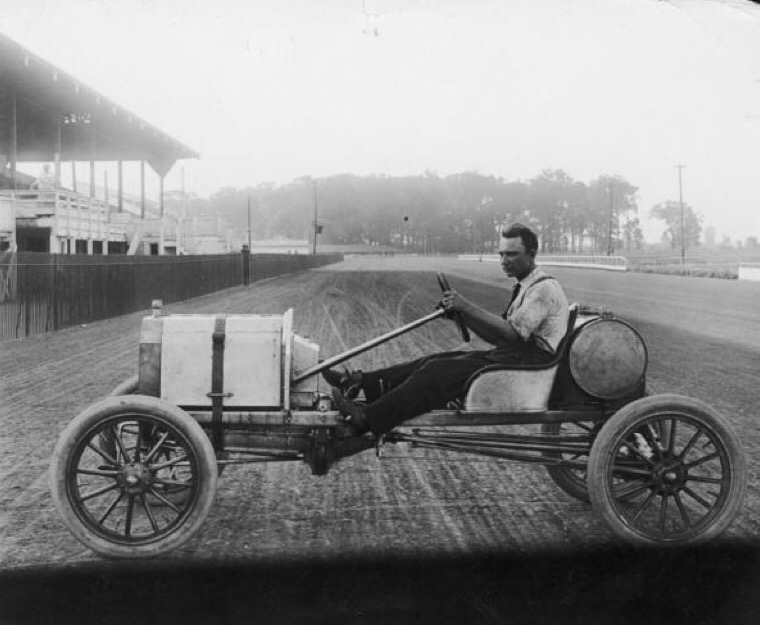 Fantastic, Rob. I really enjoy reading these things you dig up. I remember once on a thread a couple years ago, I stated that in my next life, I wanted to come back as Frank Kulick.

That still goes. He has to be one of the most fascinating unsung heroes of that era.
Most people really do not fully understand how fast he was driving in those days. To do 80 mph on a spindly nothing of a car then would be like riding a unicycle today at over 150 mph! Before 1900, even fast passenger trains rarely exceeded 50 mph. Most people never rode anything faster than a good horse (about 20 mph at full gallop). Many people never went faster than a horse and carriage (about 12 mph max).
Today, millions of people think nothing of doing 80 mph on a motorcycle. In 1906, 80 mph was more than twice the speed most people could even imagine!
I sometimes think about so many of the early racing articles I have read over the years. Road races here and in Europe, were often plagued by deaths of spectators. People lining the roadways would walk out into the road to watch for the racer's approach. Not understanding just how fast 60 mph really was, they would not get out of the road in time and be struck down by the high speed automobile. One early race in Europe was shut down halfway through because of the number of fatalities in the first half of the race.
Fast is relative. It is all about what people are used to.

What a neat read !! Thanks Rob, you always dig up the neatest things.

Great History! Nice to see that history has been corrected by proof & not hearsay!

Trying hard to not be a expert,but a good horse will easily make 40 mph. Thank you for the story and in the great race,i think Frank should have placed second?? Bud.

As I have mentioned in the past, I wish Rob would write a book about the history of early Fords, the cars and the people involved. His research is relentless and exemplary with the ensuing result being considered definitive by all.

Thanks guys. Bud, I think the speed on a one mile flat dirt track, as the one seen above with Kulick parked sideways, is pretty remarkable. The Ford Special(s, there were at least five engine variations to meet different competition size classes) was clocked at 109 mph on ice in early 1912.

Below is a photo of one of the early (1910) Ford Specials, set up with wire wheels. I've found drawings for wire wheels in "Model M" drawings at THF. 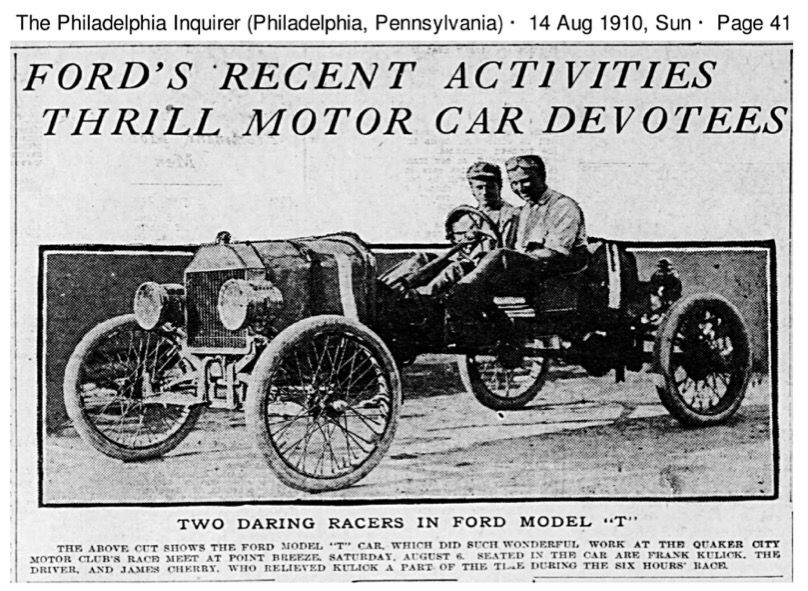 The engine sizes I've found in race records, specs and drawings are 192, 228, 278, 298 and 410 cubic inches. I suspect the car running just above and the one described below beating a six cylinder knox was the 298 cubic version. The speed is listed at 70mph. I thought it interesting that T. R. was one of the spectators among the 60,000 crowd: 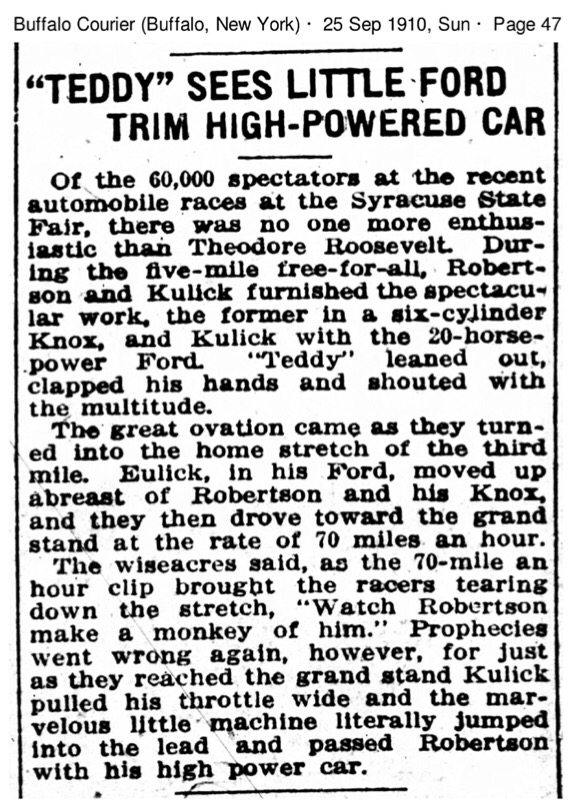 Rob,I wonder why the racer in the Aug 14 1910 picture has head lamps two people and wire wheels. Was this the Great Race [winner??] after being driven around the country on the way home? Almost 110 years later few know the true story of the 1909 Great Race. Thank you for all you do!!!!! Bud.

Ok,No great race car but i think i even see a tailight? Bud.

Rob, please put all your findings together in some form so that those of us who are hungry for history can add your work to the multitude of material we have knowing that you yourself did the research and did not rely upon the work of others. Regards Doug

Rob, Thanks for the marvelous history lesson. I love this sort of stuff. I have had the photo of Frank in his racer (last photo of your post) for years and didn't know who it was. Great coverage and research. I always look forward to your posts. Thanks again.

Bud,
The photo above of the car that ran in the Point Breeze six hour race. News articles said the race ended at 10;40 pm, and I suspect cars were required to have head and tail lamps to see, and be seen. Below is a newspaper photo of the six hour race beginning. It looks like all the cars have headlamps. I think Kulick in the Ford can bee seen in the second row between between two smoke streams. 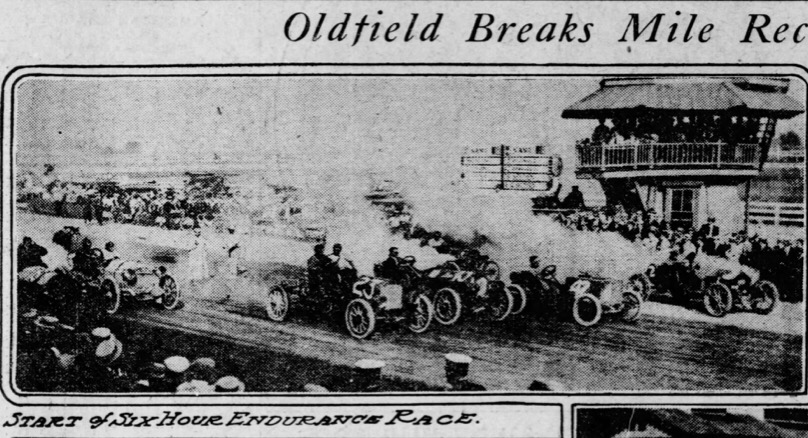 This photo from the same news article shows Kulick in the ten mile race. Either Ford had a couple of racers at the meet, or were changing out headlamps and wheels. On several other occasions Ford would have at least two racers available, with different engine displacement to enter different classes of races. 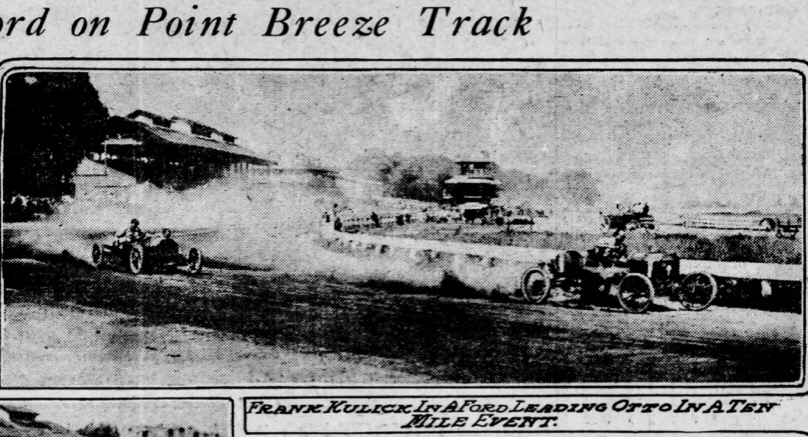 Another photo of Kulick at the Point Breeze race, with the Ford with headlamps: 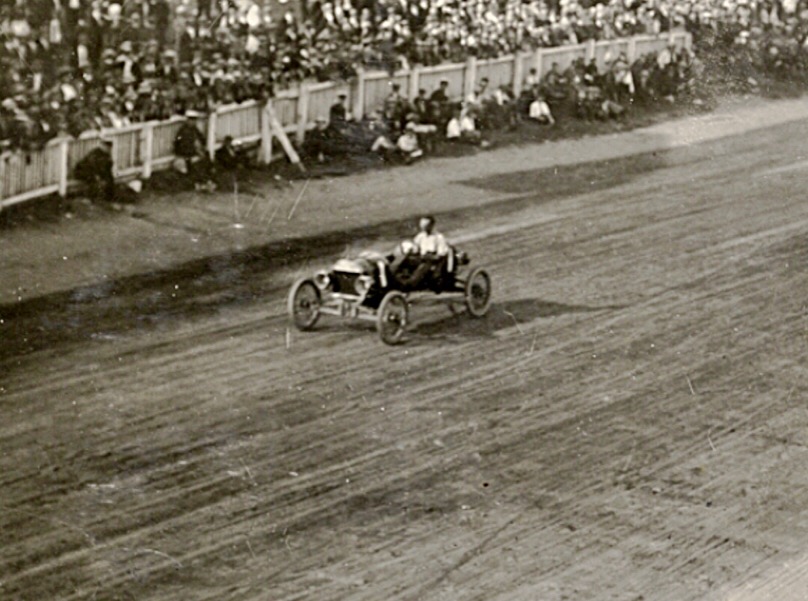 Another photo of the non-headlamp car appears to have wire wheels, with wood spokes on the right front wheel. It appears to have straight exhaust pipes out the side of the hood: 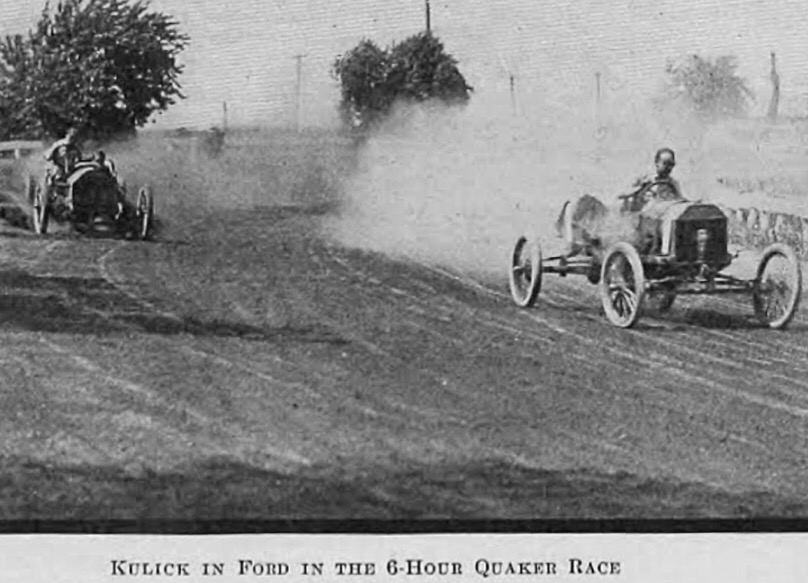 Thank's Rob! It just looked strange to me as well as the twin seats.I think the only Ford to have a riding mechanic was the Sweepstakes racer with both Henry and Spider Huff? As others have said count me in for at least two book's!! Bud.