A friend saw my spare open valve engine block the other day.He asked what a fair value would be if it was for sale.The serial number is 35060,built on Jan.3,1911.Does anyone have an opinion on its value ?

Probably more than enough to buy an on the road 1920's T!

Get the serial number researched by the Benson Ford Library . If they have that car on record ,they can tell you what model the car was . It could be from a Torpedo . That would increase the value of a already valuable block .Just a strip down open valve 1911 block could bring around 6,000.00 , more or less .Just my opinion .

A search of older posts didn't find any actual selling prices. One post stated about 10 years ago early blocks modified to an open style could be obtained for $3500.

This late 1911 closed block was offered for this at Chickasha in 2011. 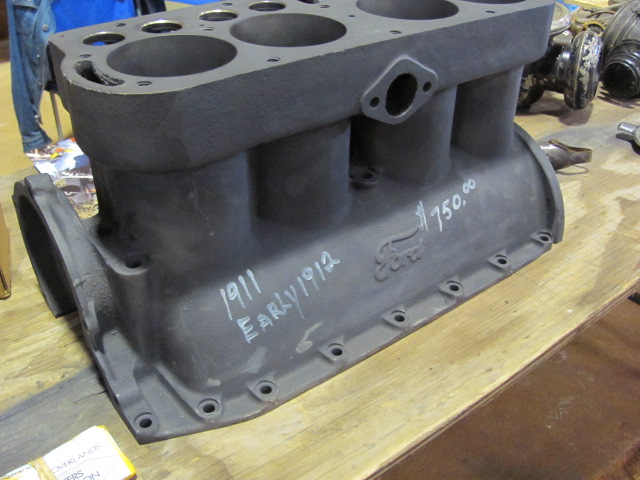 i don't do them any more, to much work. charley

Thanks Dan for the info.

A lot of factors go into the value of a model T open valve block. They changed quite a bit from the earliest till the last ones. Many people made fake ones by altering later pre-generator blocks. I have seen a few of those, some still easy to spot. Others done so well that I wasn't sure myself even looking closely and touching it. Many (relatively speaking) owners of '09 to '11 Ts don't even know that their blocks are altered later blocks (I have spoken with a few that found out after they owned the car for a couple years).

I have seen altered blocks offered for sale at over $5000. I have heard that a few nicely done ones have sold in that range. One advantage to a later altered block is that the castings seem to be better, heavier webbing for the main bearings, often better water jacket condition. For a car to be driven much? That is an advantage (at the expense of authenticity).
Real early blocks need to be carefully evaluated by someone that knows their weaknesses. The difference between a real early block worth five to ten thousand dollars and one worth maybe two thousand dollars can usually be found in the main bearing webbings or cylinder and water jacket conditions. I saw one once that I wouldn't have given a hundred for.

oh! buy the way the block in my 1910 pile i have for sale is real,not one of my conversions. charley

I agree with Wayne. My block is authentic, build date 8.10.09 stamped on the trans shaft. I joined the 2 piece crank club some years ago and tore out the rear main. The metal stitcher who fixed it said the iron was thinner and more brittle than the '11 he'd previously done.

All this has got me thinking. I, of course, have my T block patterns that I used to make the 5 main engines. I don’t want to make any more, but maybe I should modify them to make open valve blocks. I could then provide top quality blocks with the better iron and webbings. Something to think about!!

les! its been done,i was asked to look at a block.in my opinion it is a new casting. charley

Charley who is casting them? Is this a recent project. I’d like to hear more about this. Thanks John

I have seen a couple new blocks come through that where open valve blocks with the double web rear main and other later add ons that you do not see in the early blocks, have no ideal who made them but there sure is a lot of machining to make it happen!

I am being encouraged to consider this project

Peter is that person still making those? Or was that some years back? I think I remember reading about someone doing that but that has to be at a decade ago. I’d be interested if to hear more.

I really am sorry to hear that. So that news begs the answer to the question again. Is anyone casting these reproduction blocks? If so, whom?

the block i looked at was not a water pump motor & it only had one webb in the back,the boses for the cam lock bolts were machined to deep. & the cereal #s were egg shaped.it did not look right under the valve springs also. charley

Someone has Sandy's patterns for the open block motors.After Sandy decided not to cast any more of these blocks,he either sold the patterns or gave them to someone.I heard that someone in the USA has them.Does anyone know who ?

The last I heard Wayland Henry had the patterns but that was several years ago.

I have one his blocks ready to be assembled already has new Babbit in it and life got in the way of finishing up the project. Someday it will be in a 10 roadster to be built as a tour car. I would post a picture but it’s way too hard for my electronic ability. It’s a non water pump open valve block. My only complaint the casting is too nice!

So if I did a run of 10 blocks could I presell them? I am not personally interested in owning one, but I do have the sources and experience and a copy of the Ford engine drawings

Sent you a PM

Charley. Thank you, always need luck!!
Tony. Thank you for the interest

I will check to see if Wayland still has them.

The scarcity of good 1926-7 blocks would tell me there is need for them, more so that the early ones, but I can’t fathom the all-in costs after machining something like that. The cost of the raw casting is just the smallest part of the equation. Also, many casting flaws are never seen until machining is started, and then you are SOL !
Another train of thought is some reproduction items can ruin a hobby, and the value of a real original. Look what the RAJO head reproduction did to the original OHV market.

Tim
The castings I get from the foundry have been flawless, which is why I deal with them. The water jacket cores are the trickiest part. Fortunately I wouldn’t have to make any changes to them. So I am pretty confident

Peter
Well then that kind of works out OK, as people seem all concerned about it being TOO exact. I would just be making a close FAKE. At a glance it would look OK, but would not fool the knowledgeable.
Anyway it doesn’t seem likely to be worth the effort to make more new patterns than necessary.
To have a complete set of patterns made today would likely cost in the range of $10,000.00 today if I paid to have them done. My time is valuable to me. At my age I’m in it for the most fun I can have!!!

Heck I might even leave the “made in Canada “ on it just for fun. Drive some people crazy!!

Peter E and Les S, The water jacket difference is one of those little differences most people do not notice. Usually, when I see an open valve block, the first thing I see is the size of the water jacket. Whether it looks larger or smaller to me, then I check some of the other known details. I have only seen a couple where I was fooled by extensive efforts on the external water jacket.
I think making new blocks with the later water jacket is a good idea. Most people cannot see that difference. Then add some other external marking to identify it.
But, that is just my feeling about it.

Not too sure why it's a big deal to obviously mark it up as repro. 50% of any brass show car nowadays is repro: Brassworks rad, repro lamps, body rewooded or reskinned, repro fenders, running boards, splash aprons, rebuilt wheels, new upholstery, new top, bows & irons, new paint - not much left that came out of Picquette Ave. As long as it doesn't have mag wheels and a 350 V8, it's a T Ford.