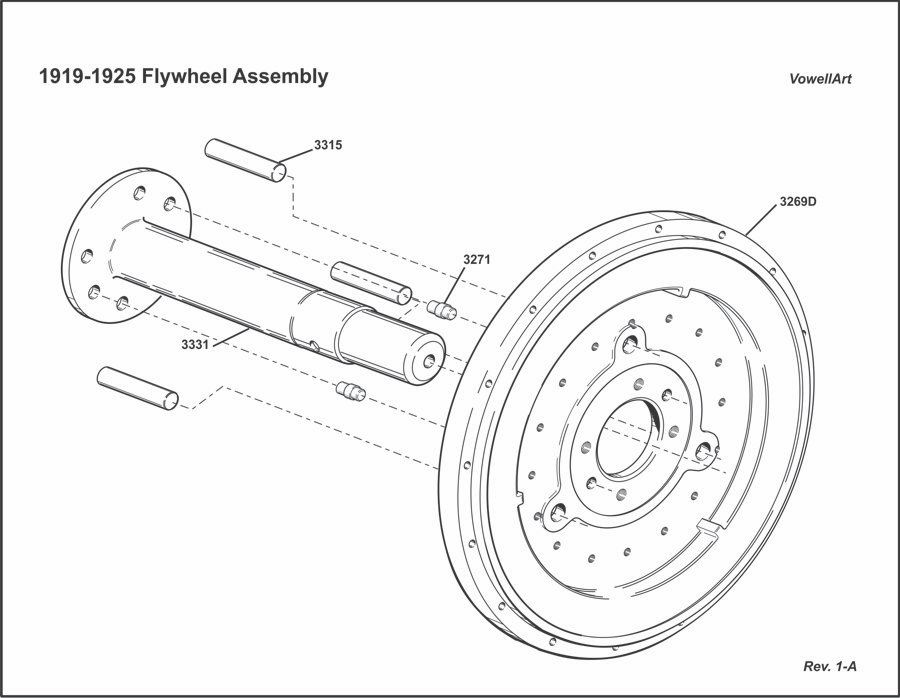 The transmission shaft is only shown here because I didn't have enough room on all drawings subsequent to this one...so consider it reference only. 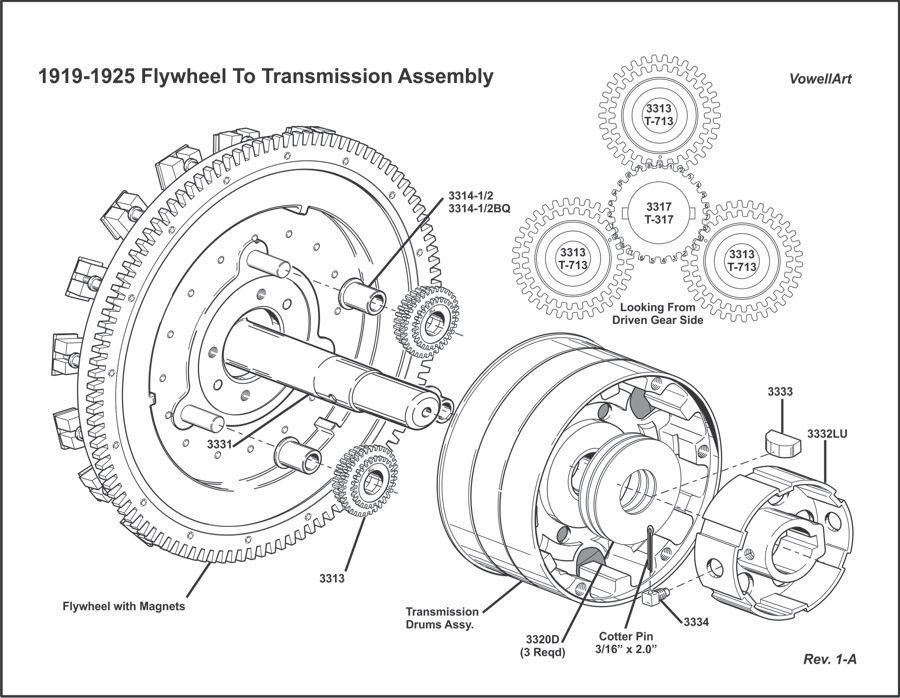 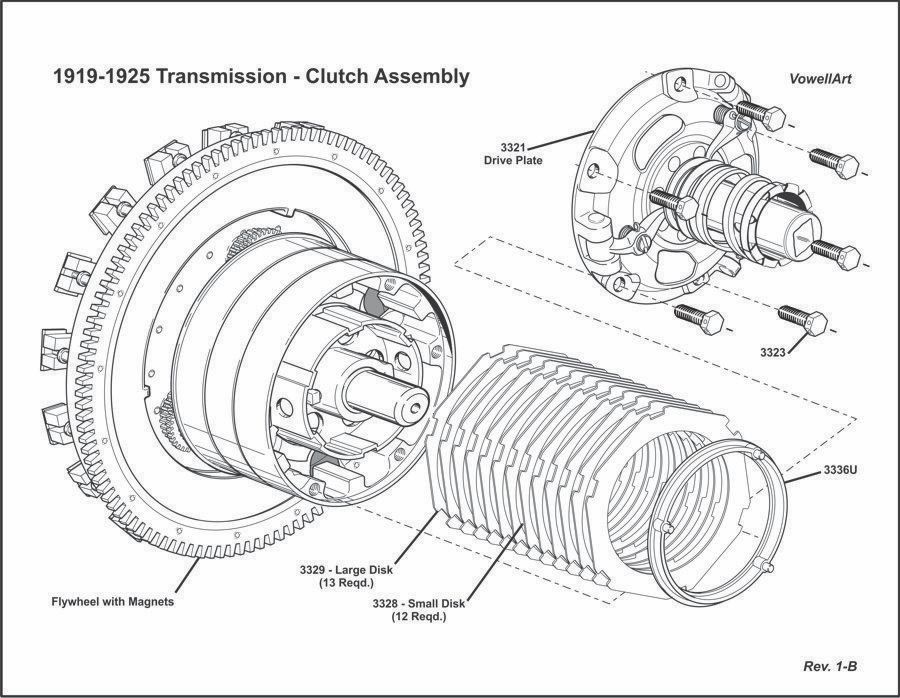 Amazing detail! These just get better and better.
Thanks for these treats.
Rich

Excellent work again Martyyn. Frank picked up on the extra lugs in the brake drum. These were introduced some time before the wide brake drum on the 26-7 models, but I don't think it was as early as 1919. Others may be able to help with the changeover. It is a significant change, involving six extra lugs as shown, removable shoes on the lugs, and a smaller diameter driven plate which goes inside the drum. At the same time the hexagonal clutch disc were introduced. Perhaps there is a need for two separate drawings for the period.

Martyyn, I missed mentioning that the triple gears changed from three separate gears riveted together to a one piece gear some time in the 19-25 time frame. Don't know if you need/want to go into that detail. I find that the riveted gears with their wider teeth wear much less than the one piece ones, and I use them as my first preference in rebuilds.

Removeable lug shoes didn't come till late 1925, the bolt holes were separate from the lugs which was different from 1914-1918...in 1919, they started with the 6 sided clutch large discs and the small discs were still round.

My engine is a 24 and its triple gears are three riveted gears like the ones in my drawings...that change you mentioned I think comes late in 1925, which is really 1926 model year, but I don't think I changed that yet for 26 though.

I didn't bother to show the rivets because I thought it cluttered up the gears and made it hard to see the one tooth indicator.

But if you guys think that they need to be shown, let me know and I'll put them in.

Awesome! The only thing missing is the expandable plug in the drive plate. Can't really be shown but maybe annotated somehow. Please don't take this as criticism as all of your assembly picture are great. I think some of these printed poster size would be good for the museum.

The triple gears were modified to one piece, no riveted 3 parts in Feb 1920. 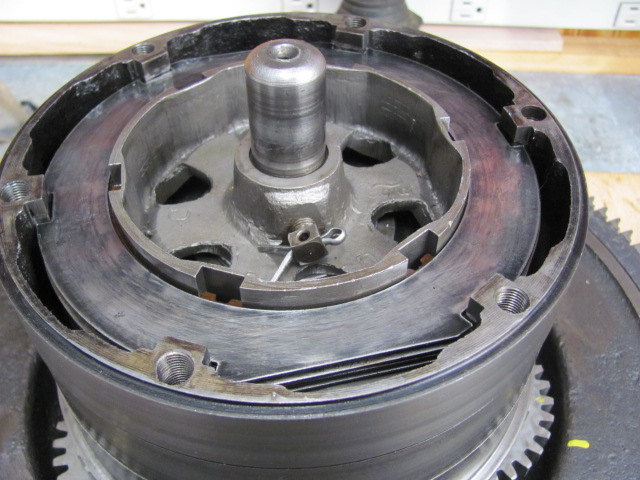 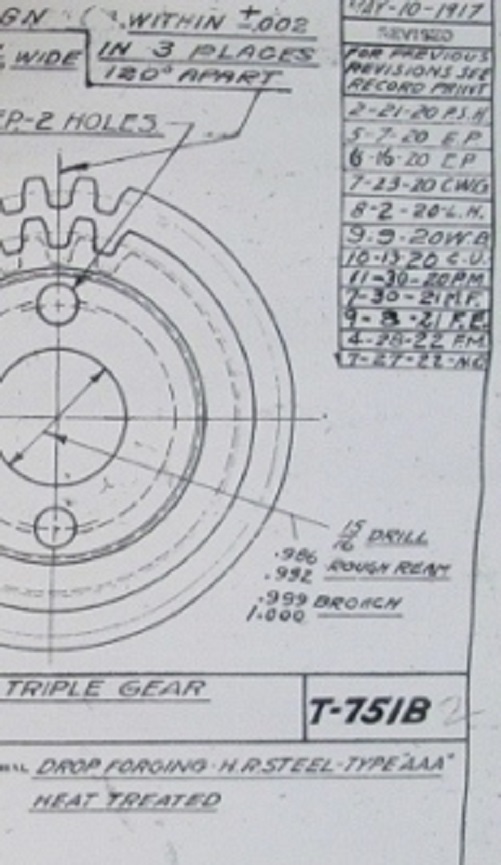 Note change date 1920 on the Ford print, the two holes are centering holes for these single piece gears machined.

Here is that rare June 1925 small drum with lugs that have 'shoes' You can't see the lugs, but can see the unique drive plate with special slotted bolts too, the drive plate has oval holes to align with that small brake drum with lugs. 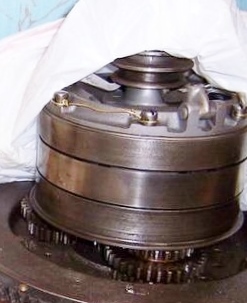 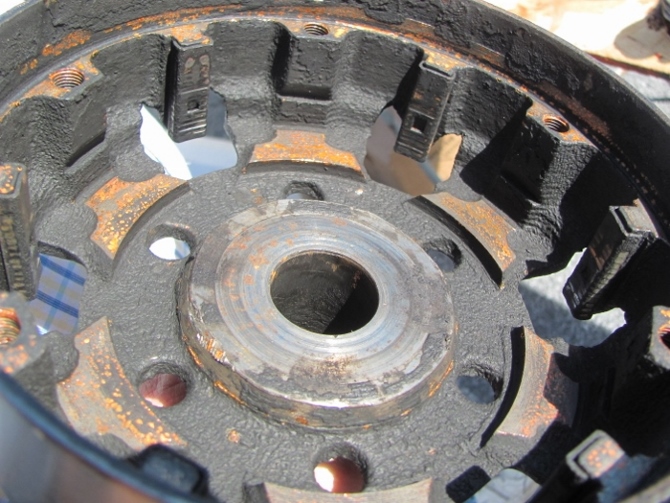 Martynn, Dan's first photo shows the usual six lugs with threaded holes for the clutch discs. Note, no extra lugs between them.

Re the interim narrow brake drum with extra lugs to take removeable shoes, I was not aware of the slotted holes to allow the driven plate to fit the drum. To fit an earlier driven plate inside the newer drum, it would have to have the diameter turned down to fit inside the drum and the mounting holes would have to be elongated to fit the smaller PCD of the late drum. Otherwise a 26-7 driven plate can be substituted.

I was interested in your photo of the 25 transmission. The driven plate appears to be sitting proud of the brake drum edge, as though it is not entirely seated inside the drum. Is there any chance that an earlier driven plate has been adapted to that trans? That would also explain the elongated holes if that is the one to which you referred. Otherwise, it would seem the factory was doing some fiddling before settling on a permanent solution.

Gary the plug inside the drive plate is on the drive plate assembly drawing, which I posted about a year ago. I don't know about you, but I have trouble finding things on this site, so here it is again. 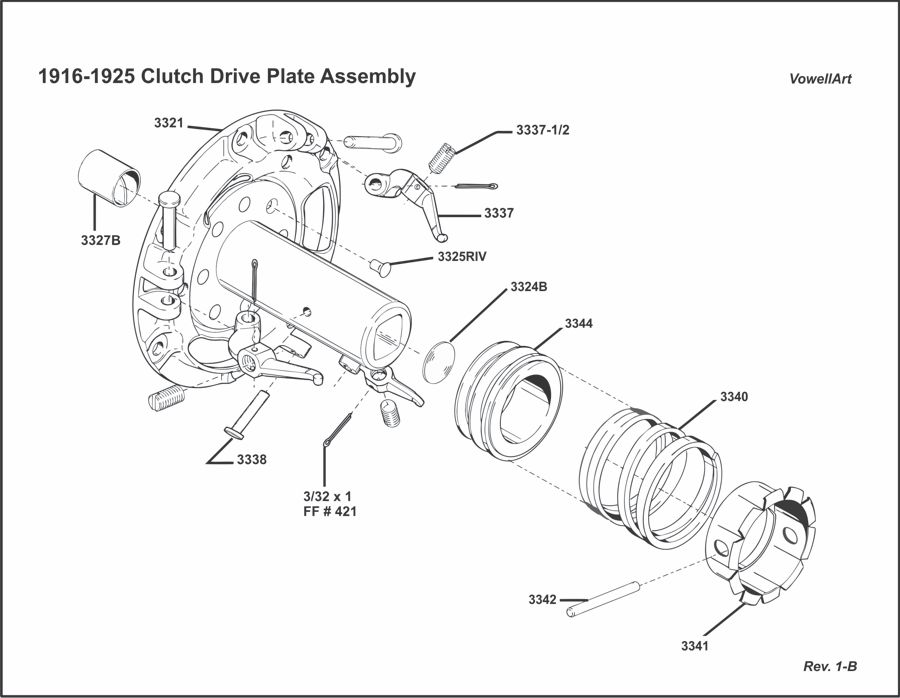