I have not worked on the T for a month or 2 but I have been running it a mile or 2 down the road some.I will be working on finishing it shortly.

What I did want to update ye on is a small tractor some of you noticed and ask about in my T pickup threads.

It is a 1961 Panzer T70B with the scarce 5-3/4 hp Briggs and Stratton that was only made a couple of years. It uses a narrowed Chrysler car rear axle and a friction drum for reverse. Only 2 forward speeds and you have to cut the engine off and swap the belt from 1 groove to the other. I have had it 15 years and I finally finished it enough to crank it and drive it today. Still need to finish the hitch system for it and paint and install it.
This tractor was retrieved 15 years from a culvert 30 feet down off the side of a hwy where it had been shoved off a truck and was obstructing the culvert causing blockage and flooding of some yards. The frame was literally warped from the fall as you can see under the grill. Once the tires were repaired, only 3 wheels at the time were on the ground.
As you can see it was far worse than most of our T projects.
I actually borrowed a complete tractor for a while back when i first started on it in 2004 so I could have patterns to make alot of the missing parts . 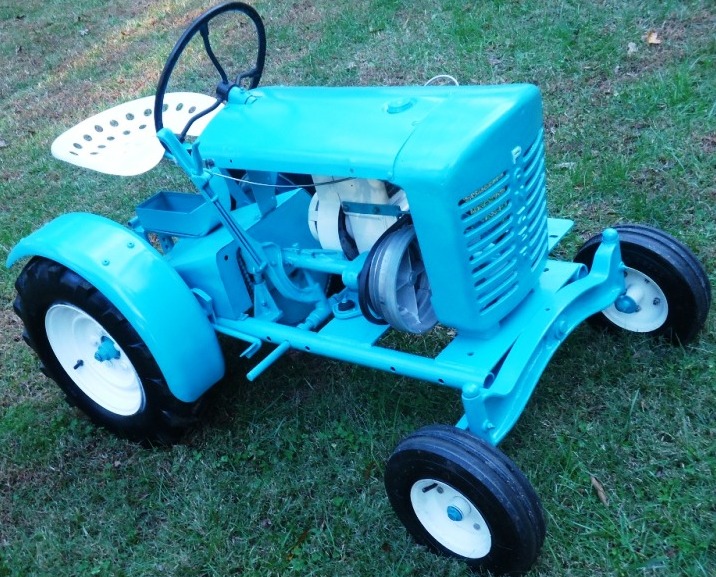 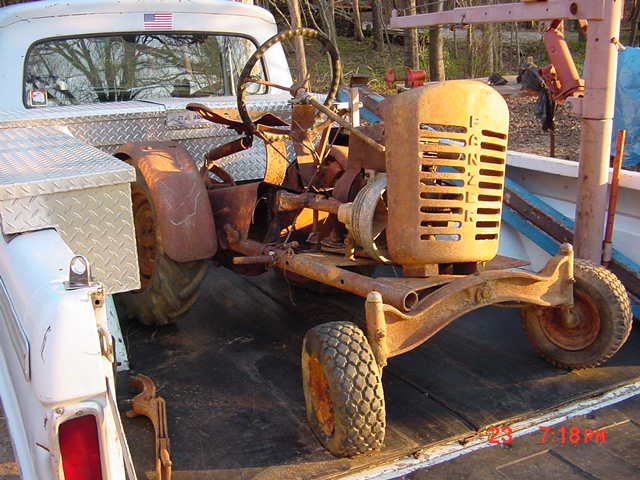 That's a rare tractor. I believe it was made in Pennsylvania in the 50's. My oldest brother was in the lawn/garden/landscape equipment business and started holding back trade in tractors and then buying some of the rarer ones from the 50's on. He restored most of them, starting with Gibson and eventually having about 100 tractors including crawlers.

He looked for years for a Panzer and eventually found one about two miles from my house at an auction we had just down the street. It was in excellent condition, about all it needed was some paint.

Last spring his advancing age got the better of him and he decided that instead of having an auction to sell his collection he wanted it to go to his friends who shared his interest. He pretty much gave away his entire collection except for the Barnett he gave me and the Panzer, which his oldest daughter had always said she wanted to keep. (She is a big time attorney in Tacoma) She has been taking it to the tractor shows and parades that he can still go to so he can watch he go by on the Panzer.

If you want to see his collection including his Panzer you can go to: www.lenstractorcollection.info

I wanted one of the Harveys but he sold them to a friend before he told anyone what he was doing. So it goes. I did get the Barnett.

Built in Pennsylvania, the Panzer was a pretty sophisticated tractor for the day and had a unique pipe frame, a multibelt transmission, standard electric starting and wheel steering.

This was a good solid little tractor with fenders,
a cast grill and custom formed hood. Expensive for the day, not many were sold and the company folded after a few years of
production. 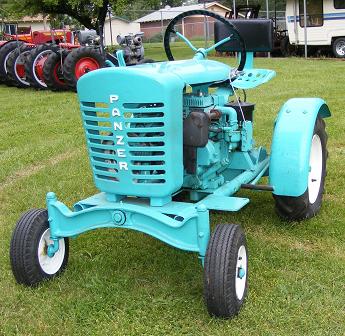 Yup, Pennsylvania Panzer. Mowed the yard with one all though the 1970s and 80s. You would never wear one out if taken care of. Now I just feel old when I see one all restored at an engine show ( and nostalgic !)

Mack, that is going to bring darned good money at your estate auction!!! =) That's what my brother always said about his collection.

I always like to see what people can do with a little pile of something to start with.

I hope you took more pictures of the process of making those parts and putting it back together.

I don't know if my brother can see well enough to get much out of it but I copied your picture and emailed it to him. He'll like it even if he can't see it very well.

Mack, I'm about an hour NW of Charlotte. I have been into garden tractors for years. I have a '76 G9 Bolens tube frame torn apart, with all the components stacked on a pallet. G9s are not as common as some Bolens models. It was my wife's great uncles. I hope I can remember how to put it back together.

Great job Mack ! Congratulations on the restoration.
Guess that your aches & pains are not bothering too, too much.

Oh,David,this was a work 20 minutes,rest 40 job the past couple weeks.Averaged 2 BC powders a day last week!
Tommy, if you go to the SmokStak website or Garden tractor talk's website,I am sure the manuals are available for download.They help a bunch!
The tractor was about half done 10 years ago and i quit on it and pushed it to the back of the shed.
My dad kept bugging me to fix it because he likes it so I finally got around to finishing it.
Plus engine parts were hard to come by as this engine gave alot of warranty problems and Briggs replaced it with a 6hp Mechanical governed engine.This is air vane governed and you can tell a difference when driving it.
Oh yes, Stan,I have a bunch of pics of it apart.It was rougher than the picture really shows.I used a full tank of acetylene and oxygen just to heat and straighten the frame work.
Len's tractor looks good.I will be painting the letters like that on mine next week.I want 1 of those seat backs!

Now that I have went to that website,I would just like to play in his junk pile! WOW,the Sit and Cut,that is the second 1 I have seen.A local guy has 1 that runs great and mows.

Thanks Mack. I have a manual. 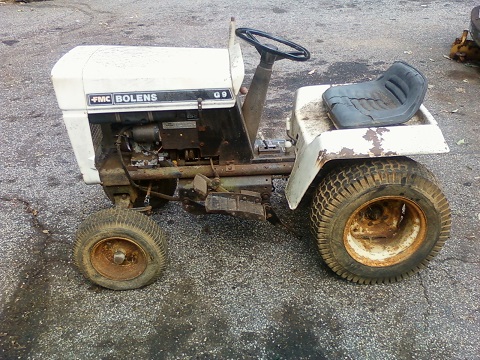 Here's the before pic.

WOW! Nice job Mack! I don't know much about tractors, large or small, but I always like "before & after" photos and your Panzer "project" (and photos) are really impressive! Kinda' reminds me of one little garden tractor project that I actually did a long, long time ago. I was a "detail draftsman" at International Harvesters advance engineering and research facility in Hinsdale, Illinois for about 4 years. One of the engineers that I worked for there had bought several Bolens tractors from a golf course that had just upgraded their lawn-mowing "fleet". I bought one of the Bolens from him and sort of rebuilt it. Had a Kohler engine that still had pretty good compression so did nothing with the engine,.....mostly just replaced belts, hoses and bearings and stuff, and a good clean-up and repaint. I don't think the Bolens was really a very good tractor though, and I especially disliked the reverse mechanism that I thought was very, very crude. The revere lever sort of jammed some sort of wedge shaped phenolic disc in between two other V-belt pulleys for reverse. The little I ever knew about garden tractors made me respect designs that utilized "tried & true" automotive components like what you called "a narrowed Chrysler rear axle" Mack. Not sure about the "friction drum for reverse" set-up though! Made me think of the crude Bolens reverse arrangement.

Have to say, altho' I suppose I was a bit prejudiced in favor of the IH Cub Cadet because I was a draftsman in IH engineering for 4 years, I really respected the strength and what I always thought was the "over-engineered", or at least, "over-built" IH Cub Cadet, because the entire transmission/differential was the complete rear frame assembly from the much larger IH Cub tractor.

Also, I always thought that any tractor, of any size, large or small that utilized "bull gears" was an excellent design, because most of the gear reduction came from the bull gears, and everything forward of the bull gears (including the engine) could be of much lighter design.

Well anyway, I'm just rambling" now, but I guess I worked as a detail draftsman for and with IH engineers just long enough to have developed a bit of a "soft spot" for tractors,.......harold

What a beautiful little tractor. Thanks for sharing.

Mack,...."simultaneous" typing, as I see you guys were talking about a Bolens garden tractor. The Bolens I rebuilt was much older I think. Looked a lot like your Panzer, but was green, stamped but heavy gauge sheet metal main frame with heavy cast iron "grill", similar to your Panzer.

Mack,...."simultaneous" typing, as I see you guys were talking about a Bolens garden tractor. The Bolens I rebuilt was much older I think. Looked a lot like your Panzer, but was green, stamped but heavy gauge sheet metal main frame with heavy cast iron "grill", similar to your Panzer.

Very cool Mack! I remember asking about it a long while ago when it showed up in a pic!
Big Bolens HT's for me but a gear drive to till garden with? Perhaps heaven. :-)

Tommy That looks like my Bolens 1050 Hasn't run in years but I still have it.

I have a rare walk behind tractor manufactured by the "Great Lakes Tractor Co" that was located in Rock Creek Ohio in 1949. They were called "The Chief" If I understand their history the company only lasted a short time 1949 thru 1952.

I have the sickle blade for the front, dirt blade, sulky seat, cultivator, plow, etc.

I forgot people on this forum collect lawn tractors and I have been trying to find a collector who would be interested in buying it as it just sits in my garage taking up space. I'll most likely put it on Craigslist soon.

I forgot to add...That is a BEATIFUL tractor Mack.

Oh good heavens I can't get things right today! The word is Beautiful