Frank Harris D.C. Generators tend to spike and if you are running a pertronics or a GPS with any car's electrical system with a generator in the circuit it will spike and blow up your solid state device. I have a picture here that shows the voltage of a 12 volt generator in action. I don't know about alternators but this is about generators. Whooops the picture won't post here because of its format but it shows the average voltage from a 12 volt generator regulated by a three way regulator from the 1950's as being 15.14 volts while jumping between 13.5 and 17 volts. So the problem is resolved by using a dedicated battery that is not wired into the vehicles electrical system in any way. The reading was done on a high zoot meter by an electronics engineer of high regard.. I will try to change the picture of the graph into another format to illustrate the things that go on with generators 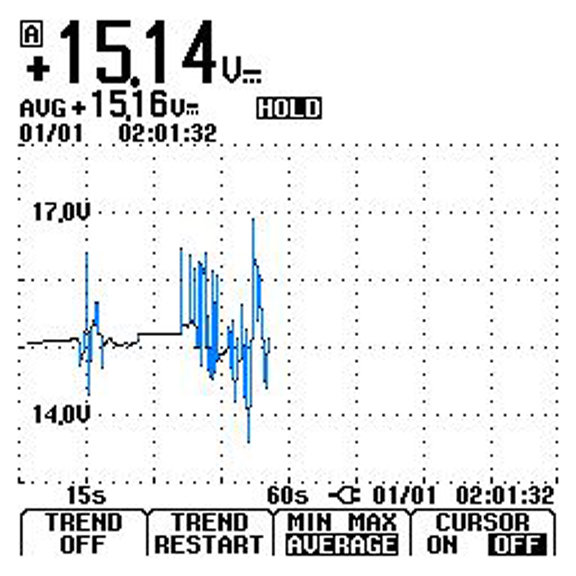 Very interesting. I've been thinking of hooking my scope up to my generator to see what it's putting out.

I have tried to use my scope to check the wave from the mag. I had so much noise coming from the coils and spark plugs that resorted to a my old Simpson ANALOG meter. If the above meter is hooked to an original model t the waveform looks much better than I would expect to see. A cheap analog meter from Harbor Freight is more reliable around a model t than high tech, high impedence digital meters. I suggest changing changing back to six volts. It's a 100 year old car, a 60 year old regulator.

I would like to see the trace from a funprojects solid state regulated 6v model T generator. I suspect a lot of the noise is contact closure & opening in the mechanical regulator. Frank's point is that these spikes may harm solid state accessories, measuring with a highly damped analog device improves the appearance of the graph, but the 'spikes' are still there. Respectfully, jb

jb,you are correct. The spikes are still there, and they can and do destroy solid state devices. I wouldn't recommend connecting any expensive solid state equipment to a model t's electrical system.

Interesting. I have fed my Mobilephone via USB adapter 12V <> 5V with no issues so far. I guess the adapter takes the spikes. And shouldn't the battery act as a huge capacitor smoothing things out?

No Michael, the power from the generator goes to the battery and as it arrives to the battery the ignition will call for it and so some of those spikes travel over to the ignition. I installed an accessory plug on my dashboard and plugged in a 12 solid state device and promptly blew it up before getting out of the driveway. A dedicated battery is the only solution, but again I don't know about alternators, I am only speaking of generators. I tried to purchase a voltage regulator that would only let 12 volts pass and they sent me a solid state 12 volt automotive regulator.