Below is an excerpt from a book written by Edith Moore Jarrett (1899-1988). Mrs. Jarrett compiled a series of newspaper articles that she had written over the years into a delightful book called, "Old Timer's Tales of Fillmore", the small California town where she had grown up and lived pretty much all of her life.

One chapter is titled, "Horseless Carriages Come To Fillmore". In it, she describes how in March 1916, young auto enthusiast Ernie Smith "...went out to the road east of town, sat down under a tree, and tallied every auto that passed. A total of 134 went by in 4 hours, and guess which model scored the highest. Yes, the Model T "Tin Lizzie", with 46."

I post this list not to start an argument on the relative merits or popularity of any given model. It's just a slice in time of a small, California agricultural town in 1916.

Here is the score:

And coming up at one each, were Grant, Lexington, Locomobile, Paige, Winton, and Apperson

We went through Fillmore last weekend on our way to the beach for a few days and I didn’t see that many Ts, or any others on that list the but that would have been really cool.

When I was a kid there were several times that I counted around a hundred cars and tallied by colors, not make. The lists were thrown away but I remember blues and greens being in the lead. Nowadays, I think there is only black, grey, white and red.
Vern

Interesting that there's not one Chevrolet or Oldsmobile.

Chevrolet started in 1912, the 490 in 1916. Of course Oldsmobile was older. Could be that there were no Chevrolet dealers in the area yet.

Mark,
You make an interesting point. We often marvel at Henry's (the other one) genius in the production of cars, but he also, very obviously, developed a distribution system that was every bit as important as the car itself and the mass production process.

I think the whole thing is more complicated than we realize.

My Fischer grandfather moved his family from Arkansas to California in 1915, landing in Fillmore. He immediately got a job working for the "Texas Company" as a carpenter.

In 1917 he purchased his first car, a used 1915 Chevrolet. Who knows, maybe that was the first Chevrolet in Fillmore. My Uncle John was 12 years old in 1917, and told me the story of buying the car. He said that the "Agent" drove the car over to their house and parked it in the yard. Grandpa paid the man, who walked back to the Agency.

As Uncle John told the story, he and Grandpa looked the car over with considerable interest. Unfortunately, Grandpa had never driven a car. Finally, Grandpa said to Uncle John, "Do you think you could operate this thing ?"

Well, what 12 year old boy would answer, "No" to a question like that ? Uncle John had a part time job working for the local dairy, delivering milk. While he had never actually driven a car himself, he had ridden along with the owner in the delivery truck, hopping off at each house to carry a rack of full bottles up to the porch and carrying back the rack of empties. Of course he had watched intently to all the starting and stopping and turning.

So Uncle John hopped into the driver seat with Grandpa riding shotgun. They headed out of town and drove a mile to the end of the road. When Uncle John came to a stop and turned around, Grandpa said, "I think I see what you're doing, let me give it a try."

So Grandpa negotiated the one mile drive back to the house. From that day, they were both qualified drivers. Grandma, on the other hand, never quite got the hang of it. Family lore had it that she never got onto the concept of slowing down before turning. But that's another story. And I believe the story of the demise of the Chevrolet. 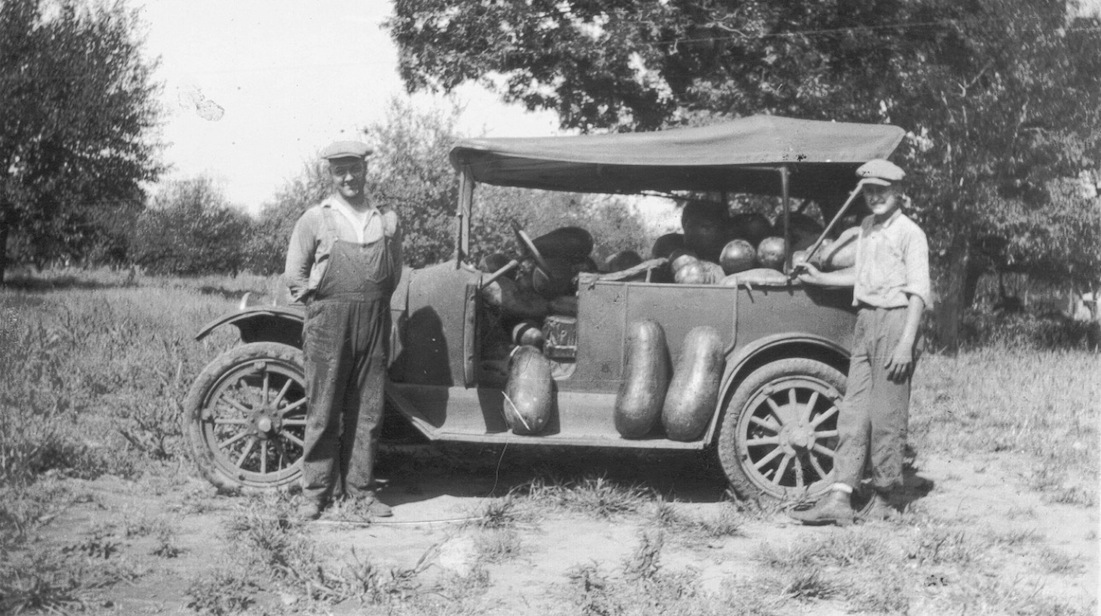 Uncle Lester Parker and his stepson Herman with their crop in the old Chevrolet.

In the mid-twenties Mom and her sister Ernestine were teenagers, and their uncle Halbert Parker came to visit. In his youth Hal had gone off to New York and become a circus band musician and a theater actor. One day the girls were driving the old Chevrolet down Summit Street, the main drag in town, with Uncle Hal riding in the back seat, when the old car died as it often did. The girls, who were used to this, shoved the car to get it rolling and popped the clutch to restart it. They recalled that Hal was absolutely mortified to be seen in that old car with the girls pushing it to get it running.

The count of 46 Ford cars in a total of 89 is about 52%. That bears out the common statement that over half the cars on the road were Model T Fords.

I always suspected that Uncle John was slightly embarrassed for having learned to drive in a chebby. He sought redemption by restoring a '26 RPU in the late 1950's. He kept that car for the rest of his life and it's currently in the hands of his granddaughter. 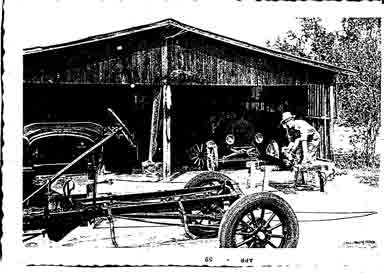 Dick Fischer - Interesting statistics for sure! Especially interesting to me is the fact that the first six auto makers (Maxwell eventually evolved into Chrysler) all survived for at least another approx. 40 years or so! The rest all died out much sooner! Thanks for the post Dick,......harold

This really is kind of a fun thing to think about. I think Henry Petrino is absolutely right when he said (above)....."I think the whole thing is more complicated than we realize."

For example Henry, the town of Fillmore was, as Dick said,....."a small agricultural town in Calfornia in 1916."

I really believe that if the same one-day tally was compiled near a large city instead of a small town out in the country, the "tally" would still show the Ford to be the most prevalent, however, I'm sure that there would also be at least a few (and maybe quite a few) larger and more expensive automobiles, such a Peerless, Pierce Arrow, Packard, etc, etc.

Makes me wonder what other statistical "comparisons" were made, "back in the day"....???

Hmmm,....I guess there is one exception to my comment above, that,...".the rest died out much sooner." Huppmobile actually did build a lot of cars, all the way up approximately the start of World War Two. Again,.....interesting,.....harold

In 1968 I bought a 1916 Briscoe V-8 from Tom Reese in Minnesota. He was a long-time fixture in AACA, and only died this year at age 89. The Briscoe had way more engine than it had engineering. It would readily top 60 mph, but if you let the grabby cone clutch up a little too quickly, it would snap an axle. Tom had bought the car in rural (was there then any other kind?) North Dakota from the son of the original owner. The owner had never learned to drive, so the son, age 15 when the car was new, had done all the driving for the family. Tom asked him whether, being a young fellow with a hot car back then, he'd attracted many girls. Tom said the fellow, by then long past his prime, had told him: "Tom. if that car could talk, you'd be embarrassed to listen."