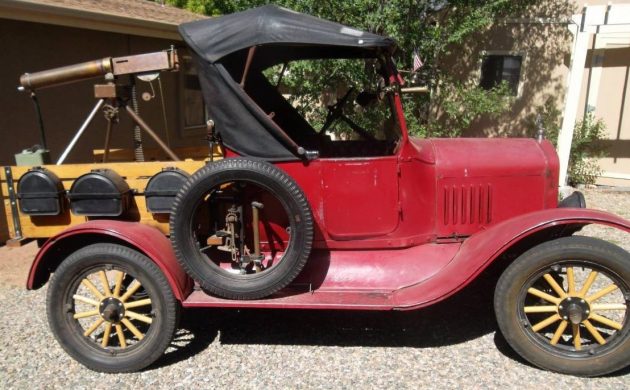 They don’t make Model T’s like this one. In fact, they’ve never made one like this. With a machine gun mounted on the back, this 1921 classic Ford Model T is nothing to mess with. The gun is actually a Vickers World War One reproduction. It even comes with the ammo belt and box. So all of that to say, if you find yourself tailgating behind this truck, you might want to back off a bit!

I don't care who you are, THAT'S funny!

Marv, Love the truck. Thanks for posting that photo. Really made my day.

And I thought STAY BACK DRIVER CHEWS TOBACCO was good .

That T is listed for sale on the local Prescott Craigslist.
I have no affiliation with this. However, I do know the owner.

What is it supposed to be? A Tong War truck?

The only thing it's missing is a life sized "Arnold" mannequin standing behind the Vickers!

My apologies if I infringed on the photo, but it reminded me of an actual happenstance.
The local National Guard unit was an armor/tank company. Tanks were equipped with rubber-padded tracks so they were able to leave the armory and travel about the streets during their weekend drills.
One of the tanks, on the way back to the armory, snubbed out and 'died' at a stop light. Unable to get the tank started, the driver radioed for assistance. 'Traffic' accumulated while waiting. A very impatient lady, in traffic and immediately behind the tank, began honking her car horn. The tank driver climbed down, went back, and explained the situation.... No matter, incessant horn honking continued.
Imagine the glare of the tank driver climbing back... However, the tank's electrical system would still be operational!
Rotate the turret to the rear, and lower the cannon to windshield level.....
(An annoying horn was quickly forgotten!)

I would have paid good money to see that one!

It is a really neat little truck with a lot more items hanging on the other side. A real crowd pleaser. Look on Prescott Arizona craigslist, and at a really great price. The owner is a really nice guy. No affiliation to the car, just know the owner Tom. Frank