I've had a OTC floor jack for years, but now it leaks on the floor almost as fast as I fill it.
Talked to a rebuilder and he said to throw it away they were not good from new. Does anybody know of a good jack that won't break the bank?
Maybe HF ?

I have had a aluminum harbor freight floor jack for 10 years with no issues. My son has had the same one at his house for 5 years and he has used it a lot. $59.00 when they have them on sale.

A good jack will last a lifetime, but if it starts to leak, it will cost more to have it repaired than to but a HF jack that may last just as long.

I have two of those 1.5 Ton HF jacks that I paid 59.99 for and have abused them to no end and they still work great. The lift is not real high so sometimes you have to put a block on or under them. It weighs about 30 pounds. I also have a 3 ton from Costco that has been great and cost about $100. Higher lift and weighs about 75-80 pounds. I almost always grab the HF first.

I bought 3 of those 59.99 hf jacks last spring. They are so well thought of here that two of them have already been stolen.

Hard to believe that someone would stick their neck out for a $59 HF jack? That blows my mind!

I'm currently in the market for a 3 ton aluminum jack.

I've been looking at Northern Tool, Harbor Freight, Lowe's, online....essentially everywhere. I don't mind spending a bit more for something that has good reviews.

Let me put my 2 cents in. I have the HF aluminum jack well its worth the money. It works fine for light cars like a model T but for something heavier I wouldn’t trust it to crawled under the car that’s for sure. If you’re going to use it for a modern car get the HF jack stands to.

I have a HF 2.5 ton aluminum floor jack. I paid about $135 with the usual 20% discount. It works great and has sufficient lift.

I got 2 of the 1.5 ton harbor freight jacks. Perfect size to take off the handle and toss in the trunk. I bought my first one about 10 years ago because of how thin it is larger ones won’t fit under my lowered mustang. Second one I keep under back seat of my t.

HF floor jack are good had mine 15 years

Just about all new jacks are made over seas and the only real difference is the color and the stickers they put on them. A quality USA made jack today starts at about $900.00. Not worth the money as finding support is now a joke.

P.S. HF and the like work just great. Use a jack stand after getting her up and before putting your head under it.

I always use stands and won't get under anybody's brand without stands.

Why are the jacks from the far east hard to rebuild so that they last, or non-rebuildable at reasonable cost? I had some long ram ones that I was interested in saving (I had made special bases for them). I had them redone despite similarly pessimistic comments from the rebuilder. They leaked again, severely, in no time at all.

The off shore or foreign made tools and jacks are better made than they use to be. As far as floor jacks go buy a alminum jack from HF. I bought a really nice looking 2 ton floor jack at an auction years ago that would leak down. It was a Blackhawk USA made jack. The guy at the hydraulic ram and pump shop told me to save my money and buy a new one. The labor to repair it was to much and he couldn't compete with a new foreign made good jack,

Val and Tim are correct. A jack is just for raising the car to put stands under it. Always use stands.

The magic word for buying a jack without breaking the bank: auction.

I usually ask my wife, kids, in-laws and parents to team up to buy me one thing every year for Christmas...it's always car-related.

This year I'm asking for an aluminum 3-ton floor jack. I've given them several options (with specific part numbers, etc).

They complained at this practice at first...claiming that I wouldn't be as pleased as I would be with a gift that was a surprise. I've convinced them that nothing could be further from the truth for a car guy who adores his old cars and tools.

It took them a few years, but they've come around.

And, for what it's worth...I totally agree about the jack stand thing. I NEVER go under a car without them...EVER. A guy got killed in my neighborhood several years ago by a car falling off of a jack. It was totally senseless.

The barrels inside are not made of a hard material, there for they score and wear out and get out of round. There’s the reason why they leak down. That’s why they are hell to rebuild. Older USA made ones had hard sleeved cylinders and you only had to change O rings.I did one of my own once upon a time. Labor of love but that is about it, (overseas made that is)

I bet you dollars to donuts that the package your new jack stands come in or the instruction sheet, says to never get under a car using jack stands.

I have a 3 ton HF floor jack. For the little I use it, it has worked great. I have had it maybe 5 years. What I do not like, The lift high is not enough for the T, but I know that going into it.

Love my little HF alum lift.....it's just that, a lift, jack stands do the support. The HF lift is light weight, only use it on the T. 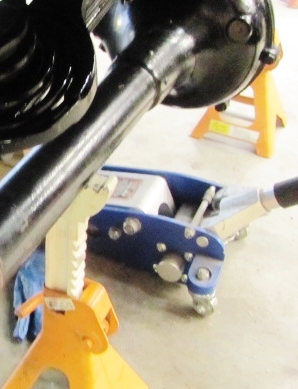 I have a HF spreader bar that I use on my old jack. Will it fit the 3 ton HF jack? You use it in place of the lift pad, great thing.

Good safety info on this thread, and I'll take it just a bit further in the area of jack stands. Believe it or not, there are still those who are foolish enough to use cinder blocks to support a vehicle that they will crawl under!

Do not ever, EVER use a cinder block for anything but that which it was designed for,.....construction of a wall or building footing. They will crumble without warning and KILL YOU! It actually happen to a friend and certainly made a life-long impression on me!

Tom take it(your old seal out of the jack) to the bearing supply or hydralic supply and they will get you the correct seal....done several paid $2.98 for the last seal including tax

Thanks Warren, never thought of that.