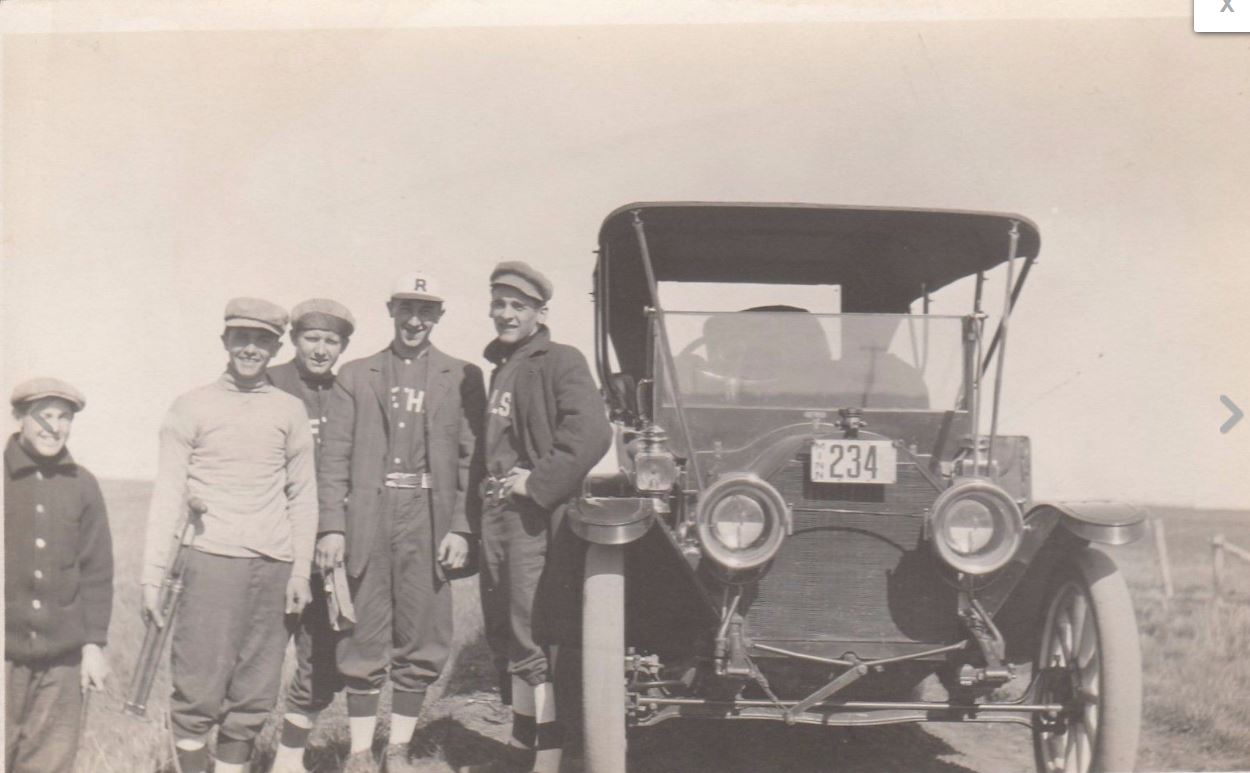 It looks like they were working on a tire.

Baseball team? On a trip? I’m trying to get a thought of photo date.

Guy/kid second from left looks like he’s holding a tripod... maybe. Guy third from left has something in his hand... no clue what it is... maybe a piece of paper looped over.

I could spend hours looking over old photos trying to figure out what is gong on.

Not a tripod, a tire pump and the other maybe a tire repair boot.

Third guy from the left is holding on to something....not sure what it is.

Could it be a rolled up tool bag or pouch?
Maybe a semi-pro baseball team traveling along and having a flat.
Whoever they were they weren't dirt poor going by the car they were driving.
Much more expensive car than a humble Model T!

By the way what kind of car is it.

Ya, but what kind of car is it?

My father has a Minnesota public registration directory for those years but I just called him and he isn't home. I'll post the name of the owner, residence and make of car when he gets back.

That'd be great. Thanks for pointing out the pump versus tripod. That would definitely make more sense! Hahaha

Thanks for the ID's. They could be posing or between their place and the ballpark.
Rich

He owned a large general store in town and was president of a bank - you can read his biography here:

It could be a Philbrick is in the photo.
Interesting!

The magic of the resources on this forum is always amazing to me.
Keep looking and Thanks!
Rich

If I went to the historical society in St. Paul, I could also look up the serial number for the Cadillac.

Interesting that Minn. still has the auto information.
Here in Texas I don't think there is a Historical society that has a that kind of info.
I do know that state auto records are expunged after 25 years.

The government in Norway keeps records of license plate numbers issued to each VIN number, and it is permissible to have your antique car registered with the original registration number. My '26 Touring originally had the license plate reading "A 966". The letter "A" was for the city of Oslo.

Minnesota required registration starting 1903 but it has handled at the local level.

Starting in 1909, it was managed by the state and that was the first year of state issued plates. The original hand written ledgers from 1909 through 1914 are housed at the Minnesota Historical Society.

Over the years we have been able to identify the original owners of cars that still survive that were purchased new in Minnesota by researching the ledgers.

My father also has some Minneapolis and Minnesota public registration directories.

The registrations were also published in newspapers so hypothetically we could research the original plate numbers for my 1917 roadster and my father's 1917 touring (because we know who originally owned them) but that that would be an arduous task that we have yet to attempt.

It must vary from state to state. We checked in the 80s to see if our T registration needed to be renewed and the DMV had lost it along with others. 1964 was when we had registered it.