few years back I had a 1911 Marmon in the shop,it had been setting idle for a while, it had a cone clutch, we got her spiffed up ,she is a roadster Dartmouth green dress, brown leather just a neat automobile, I headed out for a short run , about a mile out at the top of a hill I went to shift up to continue the run when the RPM,S took off, wow what goes through your mind in a split second, broken axle-driveshaft- cluster gear, we roll'd to a stop. with the shift lever still in gear position, engine idling,WHAT IN &^^%** is going on here, every thing looked fine, no oil running out anywhere- I lifted the floor boards now this car has a transaxle like the REO, now the flywheel is exposed in this car,I put it in gear and let the clutch out and to my astonishment the fly wheel was turning but the pressure plate was not.then it came to me what was wrong, I walked back down the road and found the strip of leather that is the clutch facing,now what to do, this Marmon has no electric starter, I am thankfully headed down hill slightly, but how to hold it from taking off down the hill wile I'm trying to stuff enough of the leather between the flywheel and pressure plate so when i let the clutch pedal back out hopefully the engine would jump start,well this took a few try's the only gear that would turn the engine was high, now to find a place with enough room to turn around with out using the clutch,now thank goodness there no big hills to climb to get back to the shop,I should have known when I started on this trip the clutch was dry, because a cone clutch when dry will try to break your neck when you let the clutch out. now to find a hunk of leather that is thick enough for the job,well I just happen to be a old gas engine buff,and have a supply of leather belting,I pulled the pressure plate fitted the leather to the face, then heated a pan of linseed oil[very careful]this stuff is flame able, soaked it for a day riveted it to the plate .as good as new. just one of many memories I have from the years of dubbing with the automobile. I bet some of you have some good ole memories too.

About those,...."good ol' memories" you mentioned,......I'll bet many of them are, or were, what I call "bandaid fixes" that involved such things as leather, bailing wire, silicone rubber and duct tape! (:^) (:^)

One of my favorites involved my Model A that I kept "wired together" during high school years. (....could just as easily been a Model T however). While at my girlfriends house for several hours one afternoon, due to having left the headlights on, I discovered a completely dead battery when I went to start the Model A to go home. Girlfriends father laughed at me when I took a lantern battery out of a railroad switchman's lantern and "jury-rigged" it up to the Model A ignition system. While girlfriends dad was laughing at me, he about fell over when I hand cranked the ol' Model A to life and drove off! The "look" on his face made it all worth it!

If you would have asked Henry Ford in 1906, he would have told you the whole concept of a sliding gear transmission is a mechanical crime and should be avoided - get a Ford with a smooth planetary transmission instead 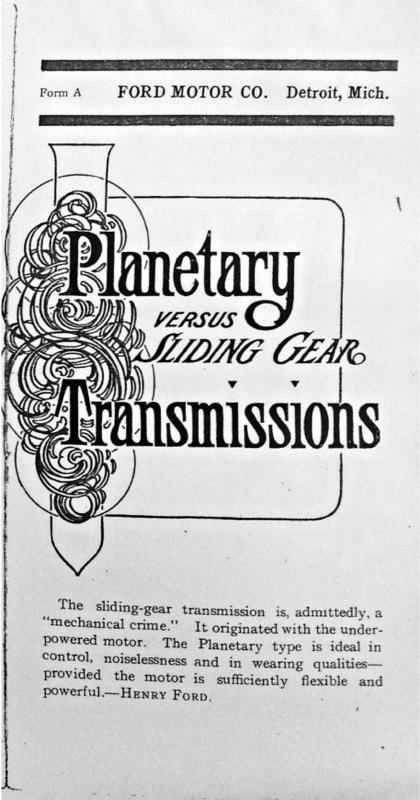 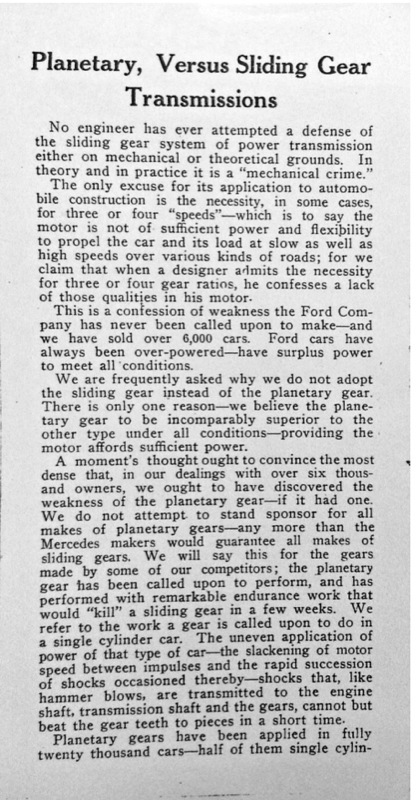 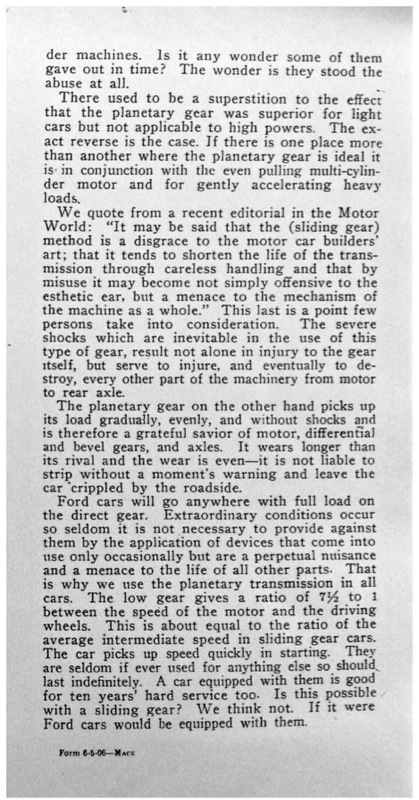 When I was young dumb and poor, (now Im old dumb and poor) The wife and I made a trip to Branson Missouri in our 64 ford pickup to visit family. Back then it was about a 4 hour trip for us to drive to Branson and 4 hours back. About half way back, the main leaf of the rear spring broke in the center near the U-bolts. Well the rear half of the spring dug into the ground and the tire went up and was rubbing the body. Its late in the afternoon, so what do I do. Seems there was a 5 wire barb wire fence right along the road. I removed about 20 foot or so of the 2nd wire up from the fence. I jacked up the truck, put some rocks under the spring and let the weight down to push the spring back to its original position. The I totally wrapped the spring assembly with the barb wire, getting it as tight as possible. I wrapped the entire rear length of the spring behind the axle. I was a bloody mess by the time I had it wrapped with the barb wire. I jacked the truck up removed the rock and let the weight down on the spring. It actually worked and we drove the remaining 2 hours home with no problems. I used the truck at home for about a week before I was able to get a replacement main leaf.

Sometimes what you have, is all you have. So it has to work ...

HAROLD, I love that story, when one owns an yesterday automobile you can understand its needs,because they were built with systems that were simple compared to today's systems, my dad had a 29 model a, that car thought me many things, one was it would run without a battery,I took it to the Hartland fair, while there someone helped himself to our battery, a friend towed me to get it started, it would run but not with the head lights, in those days a cop was unheard of, the moon was good and bright and I lived six miles from there the roads were dirt. WE lived on a good hill, the next day dad and I let it down the hill and drove it to the garage to get a battery.years later that ole girl was used to haul are winter supply of wood many years,when it became un safe to drive on the road. I oftin think of that ford and the beating it took and still kept on ticking.

Donnie, was that your blood?now that's what I call knowing what to do and make it work.try that today,you would get arrested. back around 1951 I had a 48 ford coup, worked second shift at Dewey's mills, this nite I was showing off, the parking lot was dirt so my ole ford could spin the wheels real good. well when it hit the tar the front lifted higher than i ever see it do before, well it did not settle down to normal,again worked not far from home but my head lights were in the tree tops, again we made it home,next morning I see what my foolishness did, this ford had a single spring cross ways and a stablizer that hooked to the frame one side and the axle other side when she leaped up it broke the link on the axle this aloud the spring to work its way up and over and settle on top of the shackles on the way down,it was quit job to settle it back. never did that on again.