I am ready to button up the steering assembly. So, do I whack the hell out of the rivet to conform to the column geometry. Or do drill a hole at an angle in a piece of scrap steel and pre-whack the rivet so that the head is the correct angle when I install it and whack it again? The latter might be better since I have to cut down the rivet anyway and it would be more accurate in the right form. 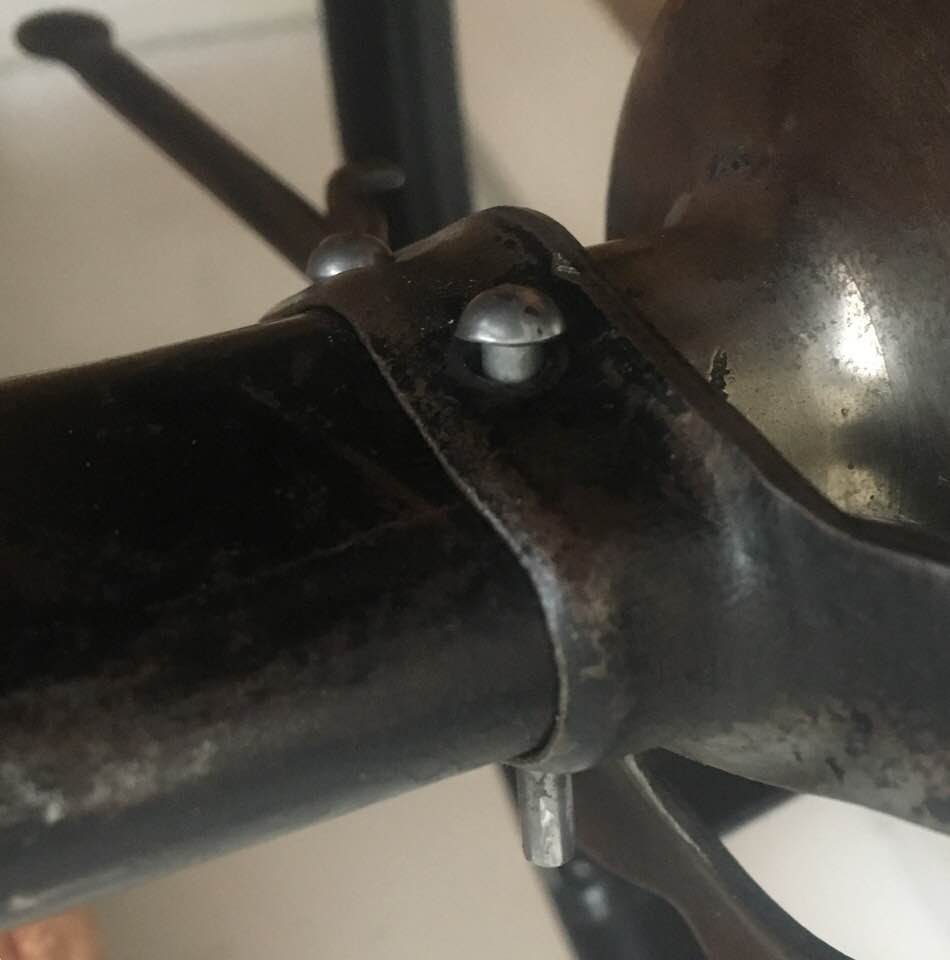 Not sure how the experienced guys do it but I cut some off the pins to make them shorter then used an old axle to cup the head. I used a center punch to flare the rivet first the beat it flat and smooth with the round end of a ball pin hammer

I'm ok with the riveting part. I'm asking about the head on the top of the rivet. See the gap in the picture because it's going in straight into a piece that is at an angle? I do have a rounded concave bucking tool.

After beating mine down the head pulled up tight to match the angle. The steel was pretty soft in the ones I got from Langs

I doubt the originals installed at the factory were coped to the angle. With the column tube and the quadrant all in the "sandwich" the rivet heads will settle in when everything is cinched down.

If the rivet doesn't go through the hole in the quadrant on the other side, you have a problem. If it does, great. Don't use the rivet you have pictured until you reshape the head to look like the original you took out. I would shape a riveting tool to closely match the way it looked on the bottom side too, and rivet it from the bottom so you don't mess up the part you can see on top. It's way easier to do if you have someone to help you. PLEASE don't use the rivet the way it is now!

Yup, the rivets, which I bought from Lang's, go all the way through if you look at the picture. As far as the head shape I'll try to profile it to look like the ones that I pulled out, though the underside of the rivets aren't so pretty. Sure, it appears that they were inserted from the top as I have here and then riveted underneath. They were not rounded under neath .. more flattened. I ground them off to remove the rivets from above. So .. in regards to my original question .. I guess the rivets are soft enough to contour given enough whacking.

Regarding the actual shape of the top of the rivets. What's the problem. Too high, too low, too wide, too narrow? Won't the bucking of them during installation change their shape as they contour to the angle of the column? It would really help everyone to post a picture when you get specific about things like this.

Here is a steering column on eBay right now. So the upper end of the rivet is flatter than the unmolested rivets from Lang's. Actually you can see that one has a higher crown than the other implying that it was pretty round to begin with. Won't that flattening happen naturally when installing? 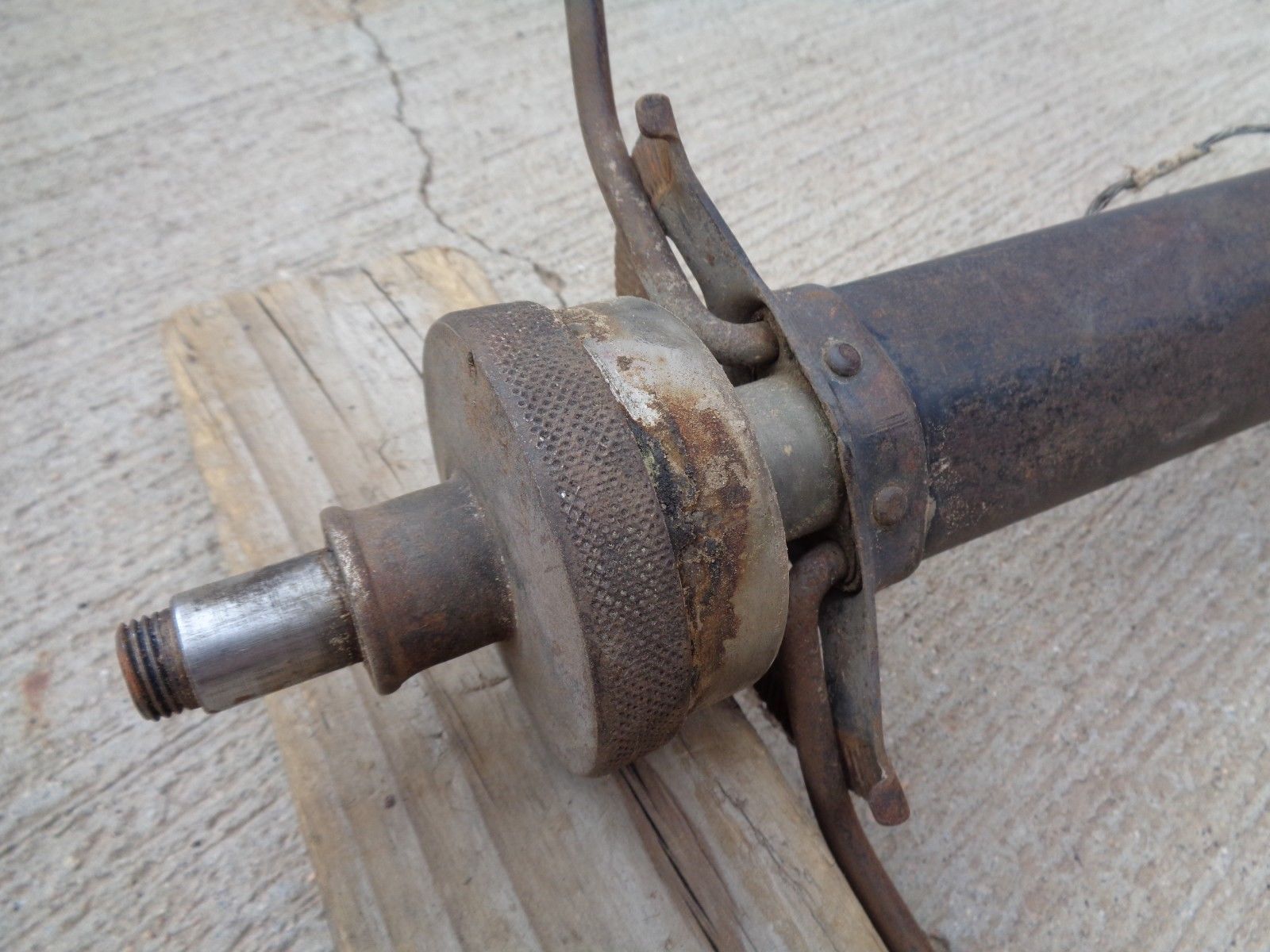 Yes the end will flatten. I would guess they were installed using a press of some type rather then hammered.

The heads are too large, and bucking them won't make them smaller. You can reshape them using a bench grinder and being careful--might want to have a spare or two to try it out, and yes, pre-shaping the head to fit flush against the column will save a lot of trouble.

Isn't there a good chance of crushing the column while trying to peen the rivets?
The factory must have had a method

Mark: Look at the post in the second thread with Pics. The original rivets have more of a pan head profile "By Dan Treace on Sunday, June 26, 2011 - 11:02 pm:
Shown is new rivet and old ones, when tamped in place the rivet will deform like the factory removed ones in the picture."

Yes, I see those pics in the second thread. There isn't much meat on the bone. But look at the ones I just posted here and there are many that look like this. This shows the upper side of original rivets. The one above is less flattened than the one below. I can measure the diameter and then carefully grind them a little flatter and then install them. I'm sure that after a little rust, they'll look pretty good for an un-restored car. I also didn't do any re-plating as it would stand out too much. The next owner can do that. I'm just trying to make everything solid and dependable.

Anneal the head end of the rivet and bend it so it's flush with the angle of the column. If you heat the other end it will be easier to peen too.

It's soft steel. Have done many. Use a pneumatic rivet gun, cold rivet, with correct size dimple rivet tool for the exposed head. If you want less dome, hit a few times with flat tool.

Pre-drill the holes with same size bit as the rivet so you know it will pass, the rivet when set will take a slight bend on the inside of the column, just the nature of the beast.

When you have the holes so the rivet will pass, then cut the rivet to length, formula is just nearly once or bit more the diameter of the rivet, that amount should be left when you drive the rivet in place, to buck on the underside. If you have a small dimple buck tool, the underside will have smaller head than the top side as factory. 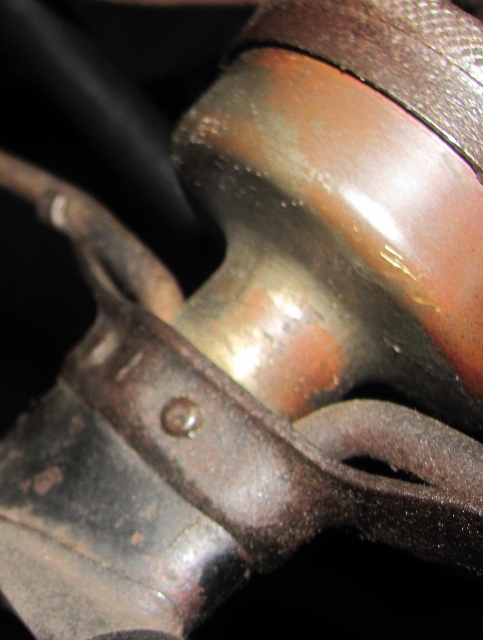 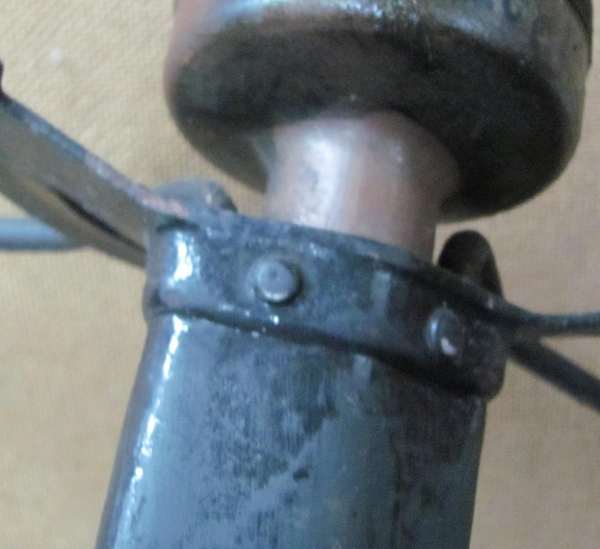 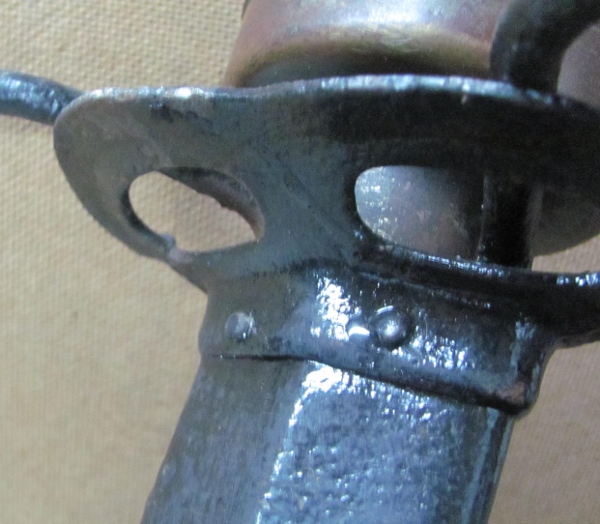 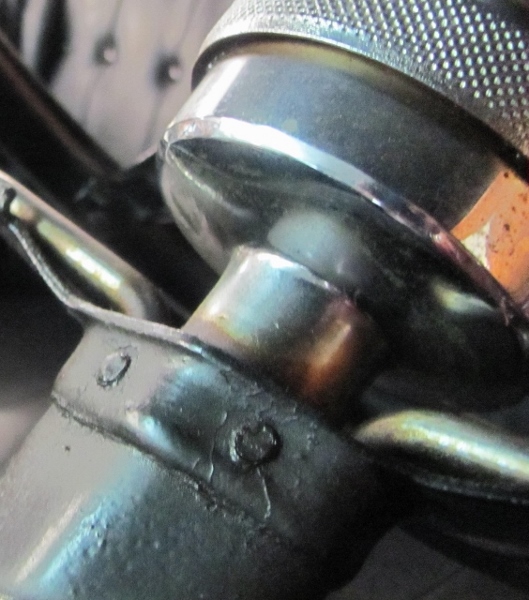 Re-rivet with flat tool on round head 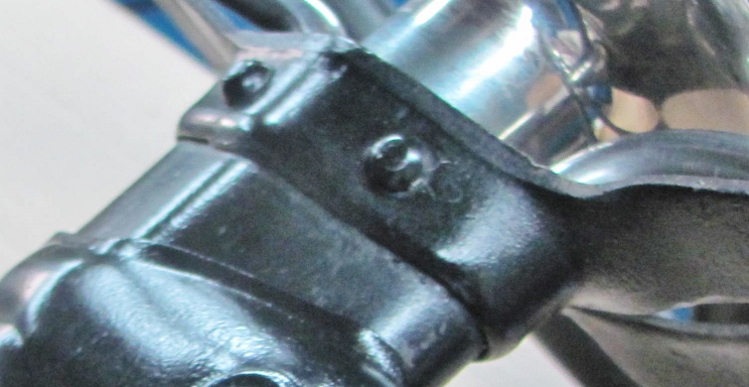 Re-rivet with dimple tool over round head

This one the rivet gun slipped in my hand and had to do a re-hit on the other side, but you know, that Ford line guy back then may have had a bad day riveting too 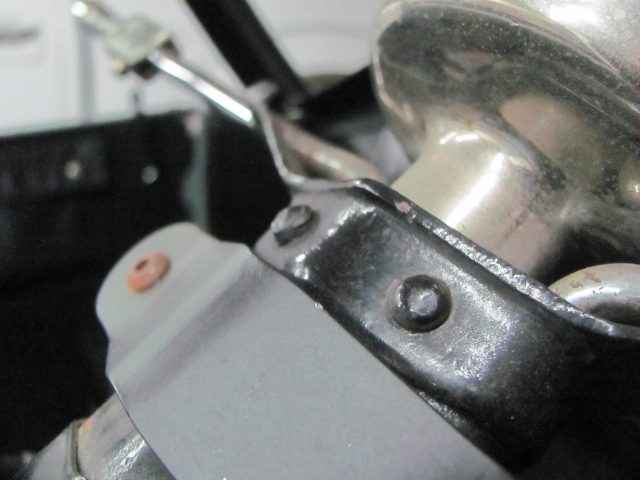 I just bought a riveting attachment for my air hammer and made a bucking bar. The riveting attachments are available through Aircraft Spruce and Specialty. As I recall, the largest one was the one that I needed. I am fortunate to have a big air compressor. Without one, the job looks like a bit of a PITA.

Just posted a few pictures of the new rivet I reformed to match the original profile .. but here is the money shot. 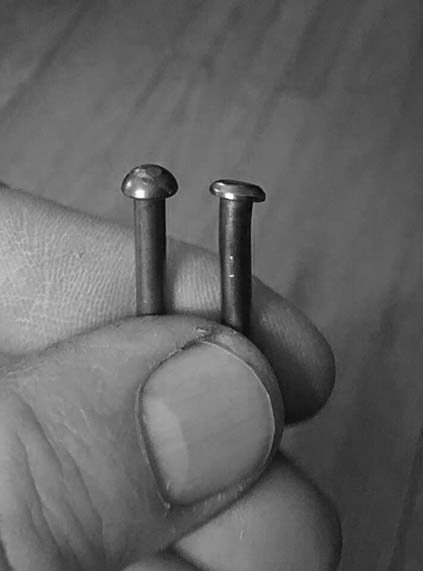 It doesn't appear the rivets were touched with a peen hammer maybe a heavy clamp that squeezed them together. 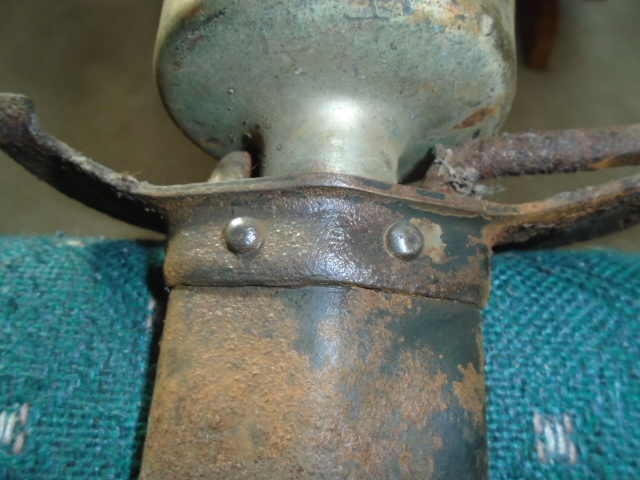 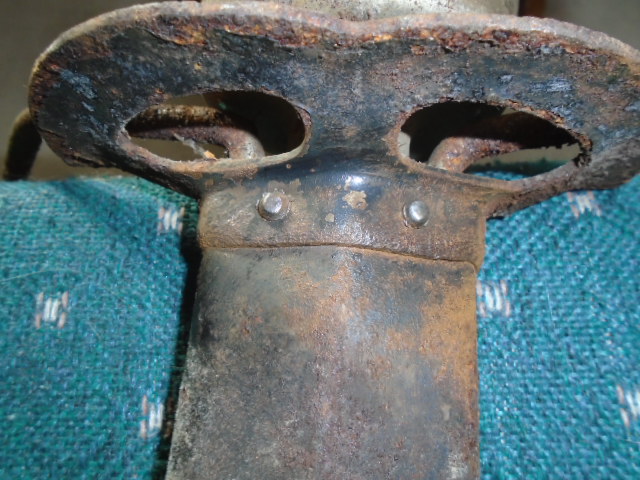 I wonder if there is a photo somewhere of this operation on the assembly line? Would be interesting to see what kind of fixtures and tooling were used.

I will be going down this road myself in the near future. Finding some looseness around the rivets. Thanks Mark O. for keeping us posted on your “rivetting” project.

It was done long before the assembly line!

Many of the Ford riveting process were done with clamps pressing the rivets into the metal and swelling them to fit the holes. The steering columns were a sub-assembly, brought to the main assembly line as a unit.
I don't know, but they possibly could even have been assembled by an outside supplier.