I am trying to rewood a '24 cut off touring body. I have the Mel Miller plans but they are unclear to me.

What I would like to find hopefully is a pic of the area of the front right door pillar to upper support. I don't know how these two are supposed to attach to each other--or what I need to cut for the shape in the wood. It looks as if my original upper support laid on top of it somehow, but that area is disintegrated.

Please help if you can. I am finding quite of few discrepancies between the plans and what I have, But I guess I ended up with a transitional body during that late 23 to 24 area, but before the '25s hit where there was more steel.

Is this what you’re looking for ? 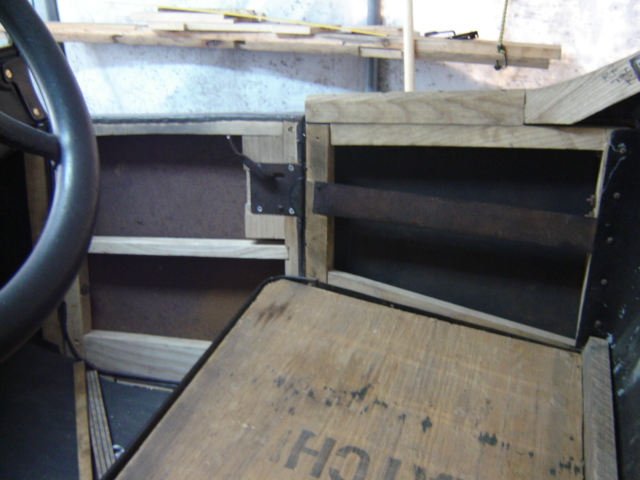 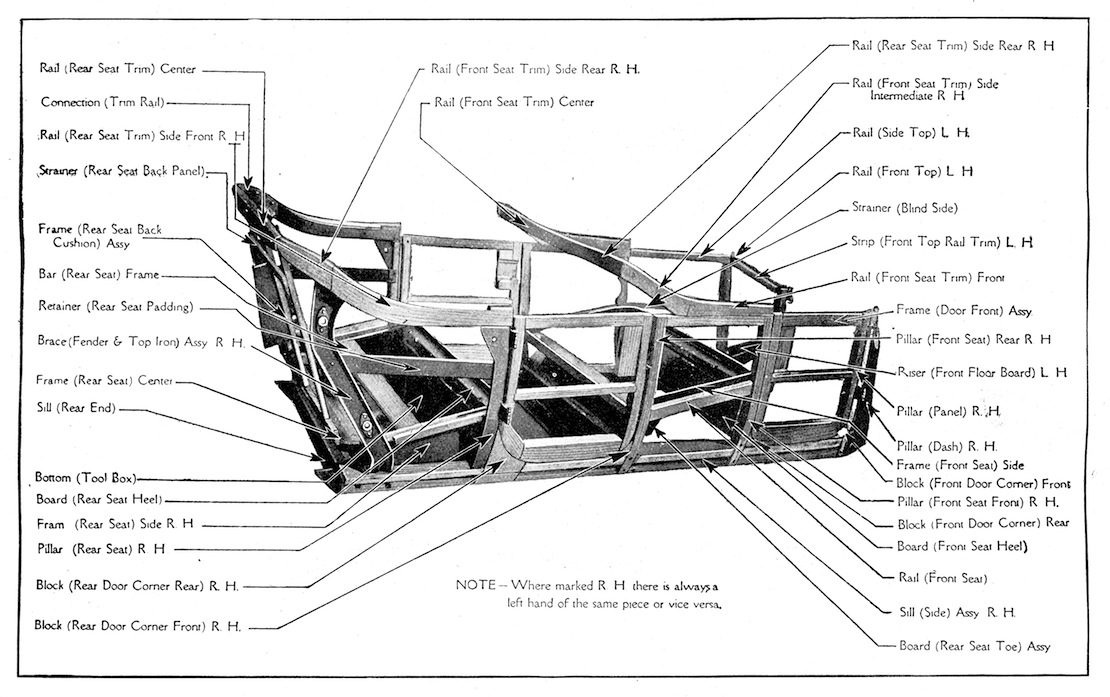 The book is listed in Lang's catalogue as T-10.

William, it is the wood piece under the cowl that connects to the door hinge wood pillar That I am after.

I'll try an get a pic later.

I suspect that you may be missing the "rail" if it is that disintegrated. It is a piece of metal that spans from the top of the hinge pillar down to the front of the body and ultimately it rivets to the front of the cowl. I am going on my experience from a '23 roadster and the picture Steve posted. 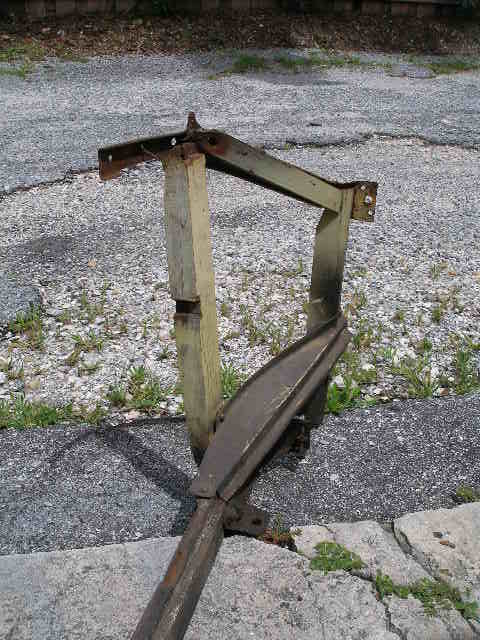 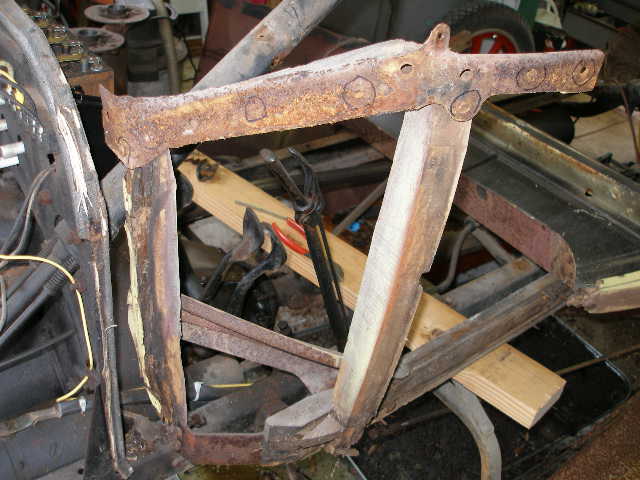 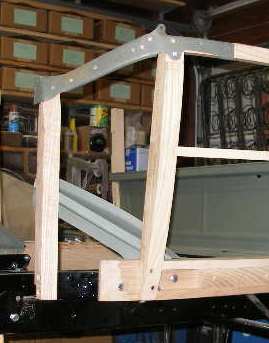 ouch
sorry for the terrible formatting!

and the wood piece screws from the outside into the back of the wood. It has a very convoluted inside form and a flat outer form. Here is one in place: 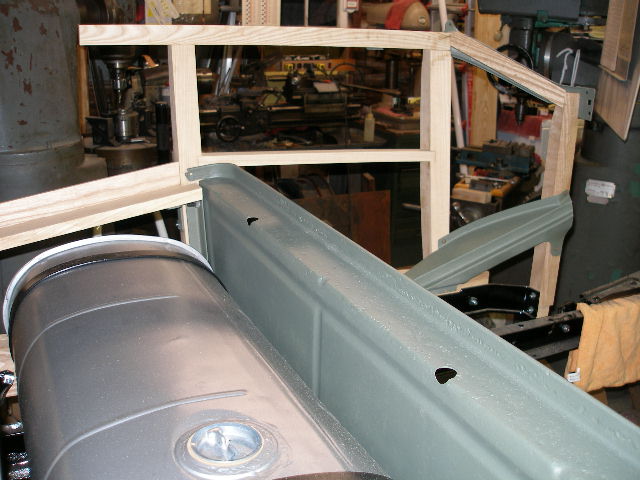 The area circled is what I need info on on how its cut and attached---But I don't know how different if any it is from this early '23. Maybe these are just screwed together with a lap joint as pictured? I think on the plans it shows a finger joint (terminology?) but it also notes its for a low cowl. 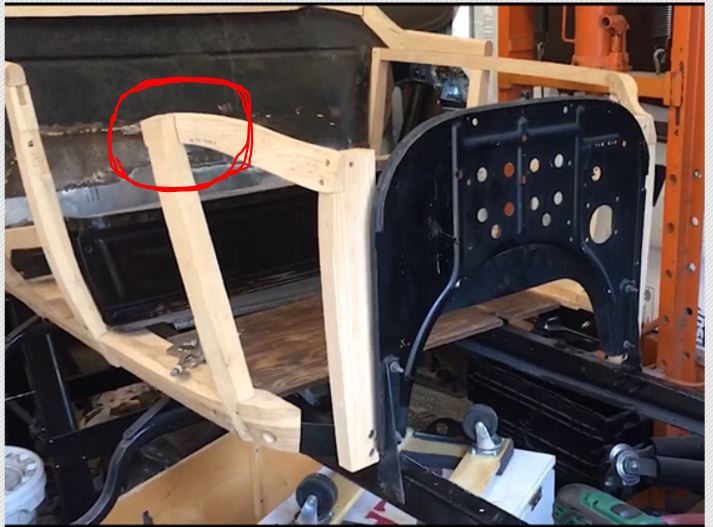 FWIW...because the door hangs from it, if you don't get better/accurate advice, I'd lap joint it such that the part gives good support to the hinge pillar. I see by your picture that you're more than average handy and quite capable of mortise/tennon and all that, but I think a lap joint would be the strongest as each piece would retain the most of it's original cross section.

Kudos to you for a fine looking job.

Did they not notch the hinge pillar in this picture and then lap the cowl piece to it?

Looks like the far side has a single #12 wood screw?

If you are working on your 1924-25 cut off CANADIAN touring, I would recommend you let folks know. The Canadian cars sometimes had identical parts (some of them had "Made in Canada" on them rather than "Made in USA") and at other times they had unique parts that were used in Canada and NOT in the USA.

Also in Bruce McCalley's book concerning the USA produced 1924-25 open cars on page 311 he states for the 1925 model year cars:

"Passenger cars similar in style to the 1924 cars but more steel used to replace wood framework in the open car bodies."

Scott, from what very little is left of that area, I "think" it was a lap joint. But as far as if it really was, and what hardware may have been used there, I can't tell you. That whole corner joint is about 90% gone.

If it was screwed in a lap joint, was it one screw or two? A #12 as you suggest could be right also. Hard saying. Understand I am not looking for perfection here, but I want to make it reasonably right, tight, and strong.


Hap, this is a '24 Cut Off Touring USA body I picked up for a speedster project. The cut off tourings seem to find me, LOL. It is in a pretty sorry state, but the price was right. The unfortunate part is just about the whole body from the bottom of the door down to the the very bottom is in a very rough state all the way around. It had no sills in the body and all the very bottoms of the uprights are gone.

All of the uprights (pillars) are adequate to make copies from (except for the bottoms), but there are just a couple of areas (this being one) that I am flying blind on.

Well, the issue is half solved. After really researching online, I should have researched my own photos.

Here is how it is held together. So, my guess is it probably was a simple lap joint in this area. This little bracket ties it all together. 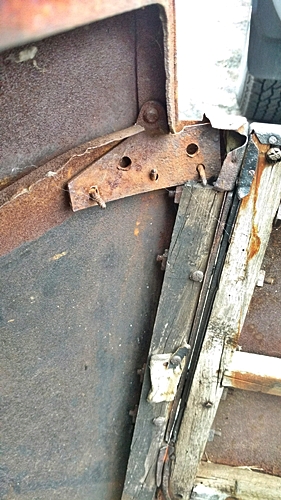 take a look at the angled notch...I'm nearly certain is is NOT a squared off notch. I'll also bet that the outside face of the missing part in this photo is clipped off at a coincident angle as the notch in the post. There were several places on my car where this sort of thing occurred. I think that keeps both parts where there is little stress directly across the grain which would tend to split things.

I'm really glad for you that you have found this picture.

This is what it started at, like I said, that whole area was gone. 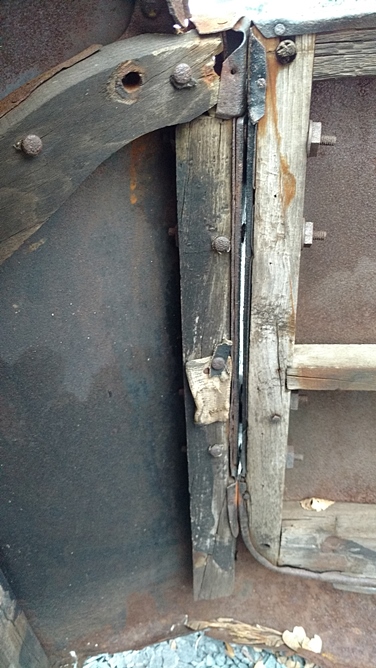 Chad! You exaggerate!
I'd say it was mostly there! HAHA
Anyway, looks like you have a path forward. My before/after pix came in handy a couple of times, too.

Chad- as far as I can tell from piecing my 24 Touring together the two pieces just butt together. There is no lap joint. I have seen the butt joint two different ways. The first is yours with the wood sitting on top of the wood pillar and the other is the wood butting into the side of the wood pillar. This second way has a full height wood pillar like in the photo you circled. The sheet metal gives it it’s strength, the wood just holds the metals shape.

The joint at the other end (dash pillar) has a metal angle bracket that screws to the inside faces of the two pieces and the carriage bolt also goes through it.

They just butt together. On a 25 that entire area is metal